Liga Privada 10-Year Aniversario is rolled with Nicaraguan and Honduran filler and Mexican San Andrés binder. It’s enrobed in a dark, near-oscuro criollo wrapper grown in the loamy soil of the Connecticut River Valley, a rarity compared to the broadleaf and shade tobacco varietals more commonly grown that region.

For the time being, Liga Privada 10-Year Aniversario will come in only one size: a 6 inch by 52 ring gauge toro retailing for $17.90. The cigar sports a covered, uncut foot and a coiled flagtail head Drew Estate is calling “cola de pescado,” Spanish for fish tail.

Liga Privada 10-Year Aniversario wears a dark criollo wrapper from Connecticut over a Mexican San Andrés binder and filler from Nicaragua and Honduras.


The smokes come in 10-count black wooden boxes, with each cigar presented in its own individual slot separated by wood dividers. Only 10,000 Liga Privada 10-Year Aniversarios (1,000) will be produced for now. Drew Estate said that it will be adding a robusto, corona doble and torpedo in the future “after additional crop harvests.”

“This cigar symbolizes the bond of partnership between farmer and manufacturer to grow a criollo capa that is worthy of unmatched celebration,” said Jonathan Drew, president of Drew Estate. “Exclusively grown for Drew Estate, I challenged [Drew Estate master blender] Willy Herrera and the factory team at La Gran Fabrica Drew Estate to create the cigar that could live up to the broadleaf bully that we have come to love, to celebrate the 10 years of Liga Privada.”

When Liga Privada No. 9 (which translates to “private blend”) was first introduced at the annual IPCPR trade show in 2007, it came in only a 6 inch by 52 ring gauge parejo. At the time, it was a bit of an experiment for Drew Estate, which had carved out a niche in the market with ACID, its line of infused cigars. While many companies were touting puros, Liga was a four-country blend that included Brazilian mata fina (rarely used back then) wrapped in expensive, tantalizingly dark, broadleaf tobacco grown in Connecticut. 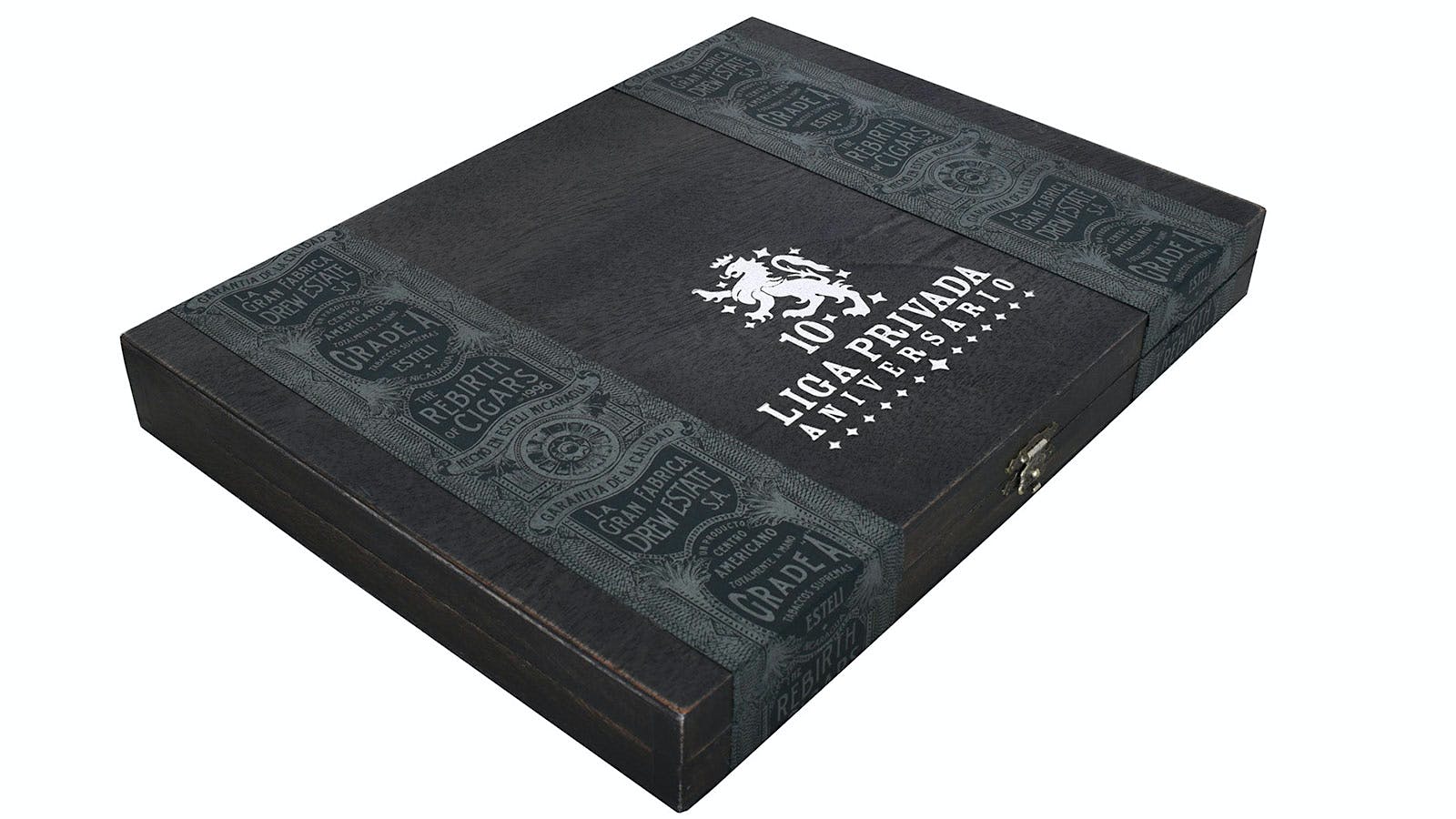 Only 1,000 boxes of Liga Privada 10-Year Aniversarios will be produced for now.


The cigar soon gained lots of traction as a “must-try” smoke, and Drew Estate responded by adding three sizes to the line in 2008. In the December 2008 issue of Cigar Aficionado, the Robusto Oscuro scored a respectable 88 points. Liga Privada No. 9 only continued to get better, as the Corona Doble size made Cigar Aficionado’s Top 25 cigars of 2015 list at the No. 10 spot with a score of 94 points.

The next year the company debuted Liga Privada T52, a similar blend to the No. 9, that replaces the No. 9’s Connecticut broadleaf wrapper with a Connecticut Habano cover leaf. Named for the proprietary seed type, the T52 uses a stalk-cut wrapper, meaning that the tobacco leaves are not primed from the plant in the traditional way, but are speared through the stalk and cured on the stalk as well. Like the No. 9, the T52 also sold well, and Drew Estate added three sizes to the line in 2010.

Today, Liga Privada is a highly coveted brand, with passionate fans stopping at almost no cost to get their hands on the limited cigars. Like all Drew Estate cigars, Liga Privada 10-Year Anniversary is made at La Gran Fabrica Drew Estate, located in Estelí, Nicaragua.