Share
Cigars were everywhere at the ProCigar festival. This special box was handed out to guests as they filed into the final evening Gala Dinner Party.

The biggest and brightest cigarmakers in the Dominican Republic recently played host to hundreds of enthusiasts who trekked from all over the world to the island nation for the 13th annual ProCigar festival, a weeklong celebration of the Dominican cigar industry.

The event, which ran from February 16 to 21, was not only a smoke-filled affair for attendees to light up plenty of Dominican cigars, but also a chance for them to take a peek inside the operations of their favorite cigarmakers and tobacco growers on the island. During the day, guests toured cigar factories and tobacco fields, and then at night they would gather with their cigarmaker hosts for extravagant dinners—and more cigars. 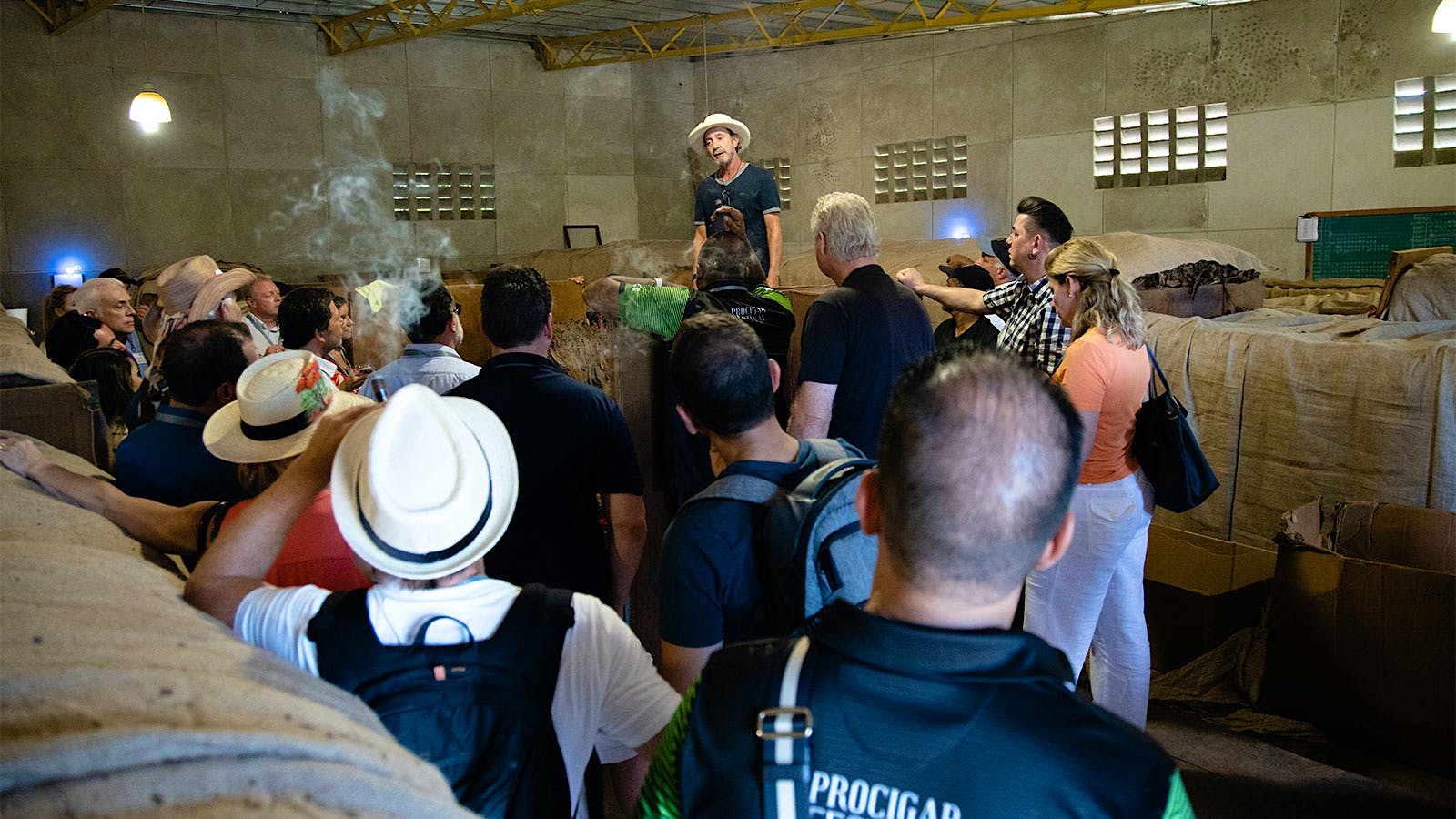 According to ProCigar organizers, more than 450 guests from more than 20 countries were welcomed to the event, which started at the luxurious Casa de Campo Resort in La Romana on February 16. Located on the eastern part of the island, the cigar-friendly resort offers stunning vistas of the Caribbean Sea, three world-class golf courses, excellent food and drink options, as well as a number of activities. 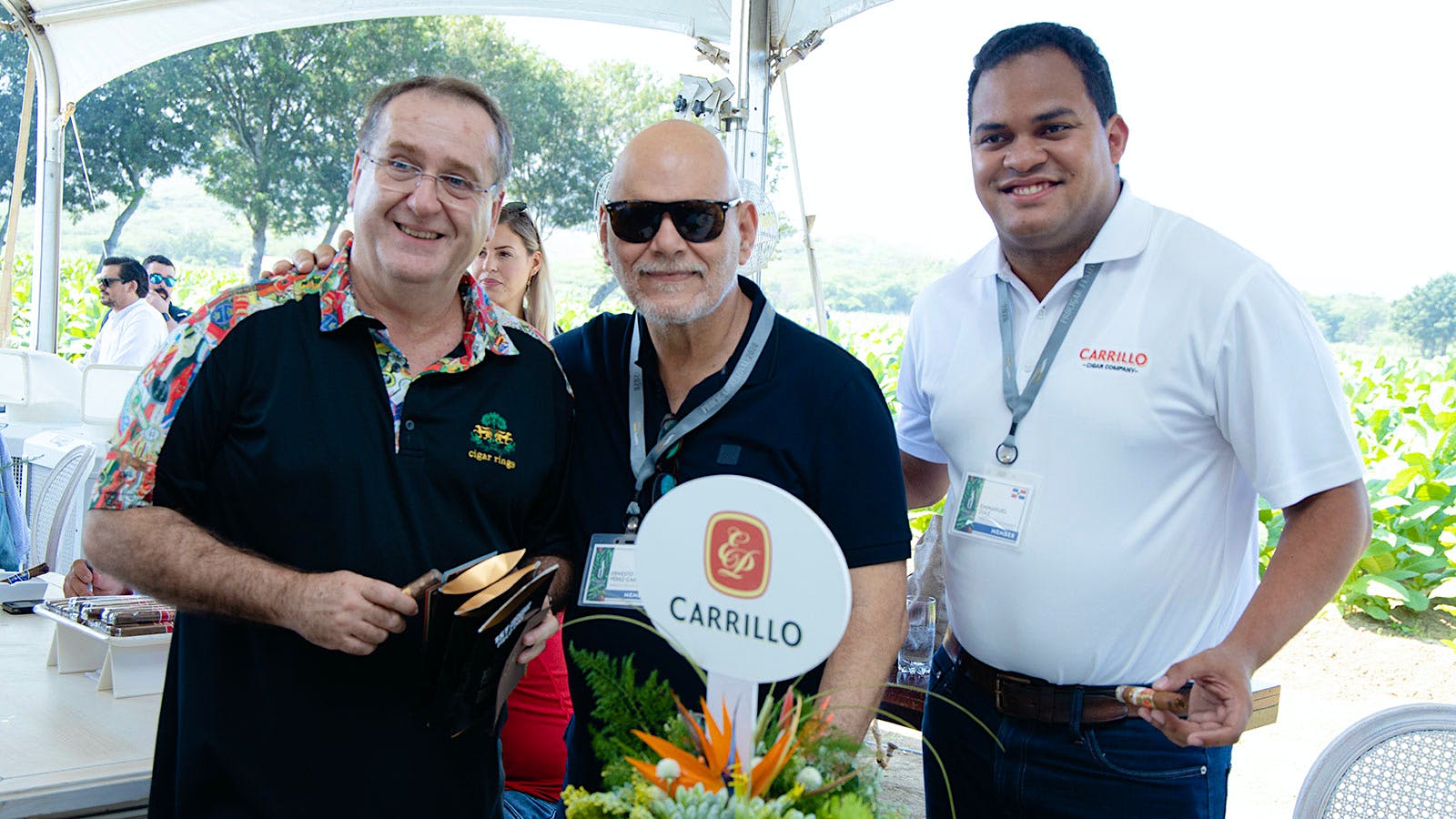 Part of the ProCigar experience is being able to meet and speak with some of the best cigarmakers in the world such as Ernesto Perez-Carrillo, center, owner of Tabacalera Alianza and EPC Cigars.

Upon registration, guests received a gift bag filled with swag and a brightly colored sampler box of cigars from each of the participating ProCigar members.

The following day began with a cigar seminar called “From the
Leaf Grade to the Smoking Experience” hosted by the Grupo de Maestros of Tabacalera de García, the largest cigar factory in the Dominican Republic (which turned 50 years old last year). The next morning the factory opened its doors so guests could see how the non-Cuban versions of Romeo y Julieta, Montecristo and H. Upmann are made before festival-goers departed for Santiago in the afternoon. 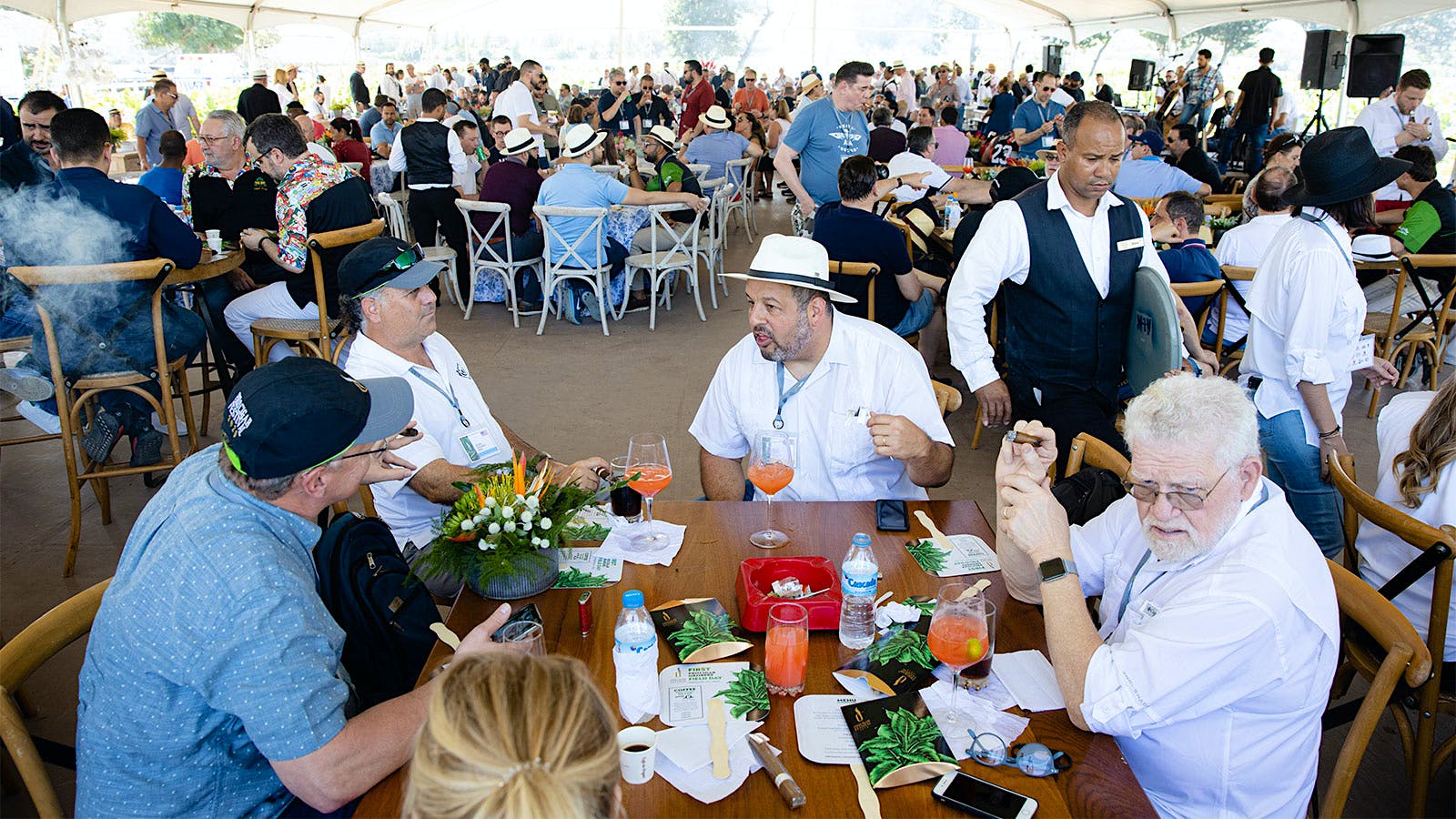 During the Members Field Day, attendees enjoyed lunch and cigars in a tobacco field alongside the ProCigar members.

In Santiago on the following day, guests were free to choose from a variety of tours that included field and factory visits as well as a special Brugal 1888 rum and cigar seminar in the early evening. That night the festival hosted the official Welcome Dinner Party at the Parque Central de Santiago, which included another sampler box of cigars.

The people attending were free to choose their own itineraries for more farm and factory tours the next day, and then it was time for them to don their best white formal outfits for the annual White Dinner Party at Monumento a los Héroes de la Restauración. The monument, which stands tall on a hill at the center of Santiago, was transformed from a tourist attraction into a regal site for a party filled with music, food and drink. 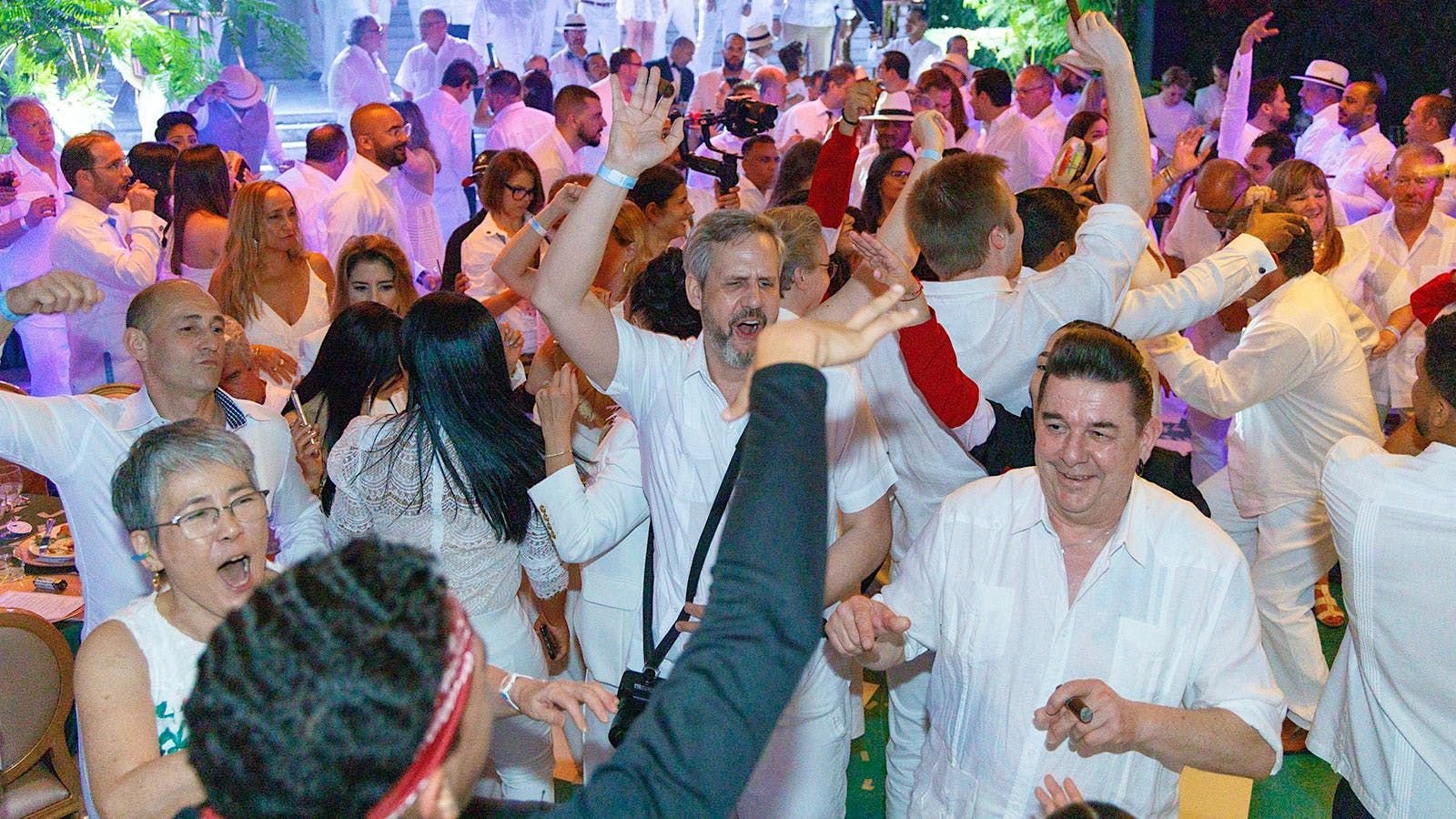 The annual White Dinner Party has become one of the festival's most anticipated events.

On Friday, instead of more tours, ProCigar switched things up a bit to offer the first Members Field Day. All of the attendees were transported to the tobacco fields of La Flor Dominicana in the region of La Canela. As guests walked into the fields they were handed beverages and a box as they made their way to a large white tent that had been set amidst a field of growing tobacco. On the perimeter of the structure were individual tables, each with a ProCigar member.

The boxes didn’t contain cigars, but “playing cards” of each ProCigar member, similar to a baseball card. Attendees then “traded in” these cards to the appropriate member to not only get a chance to chat but to receive one of their signature cigars. 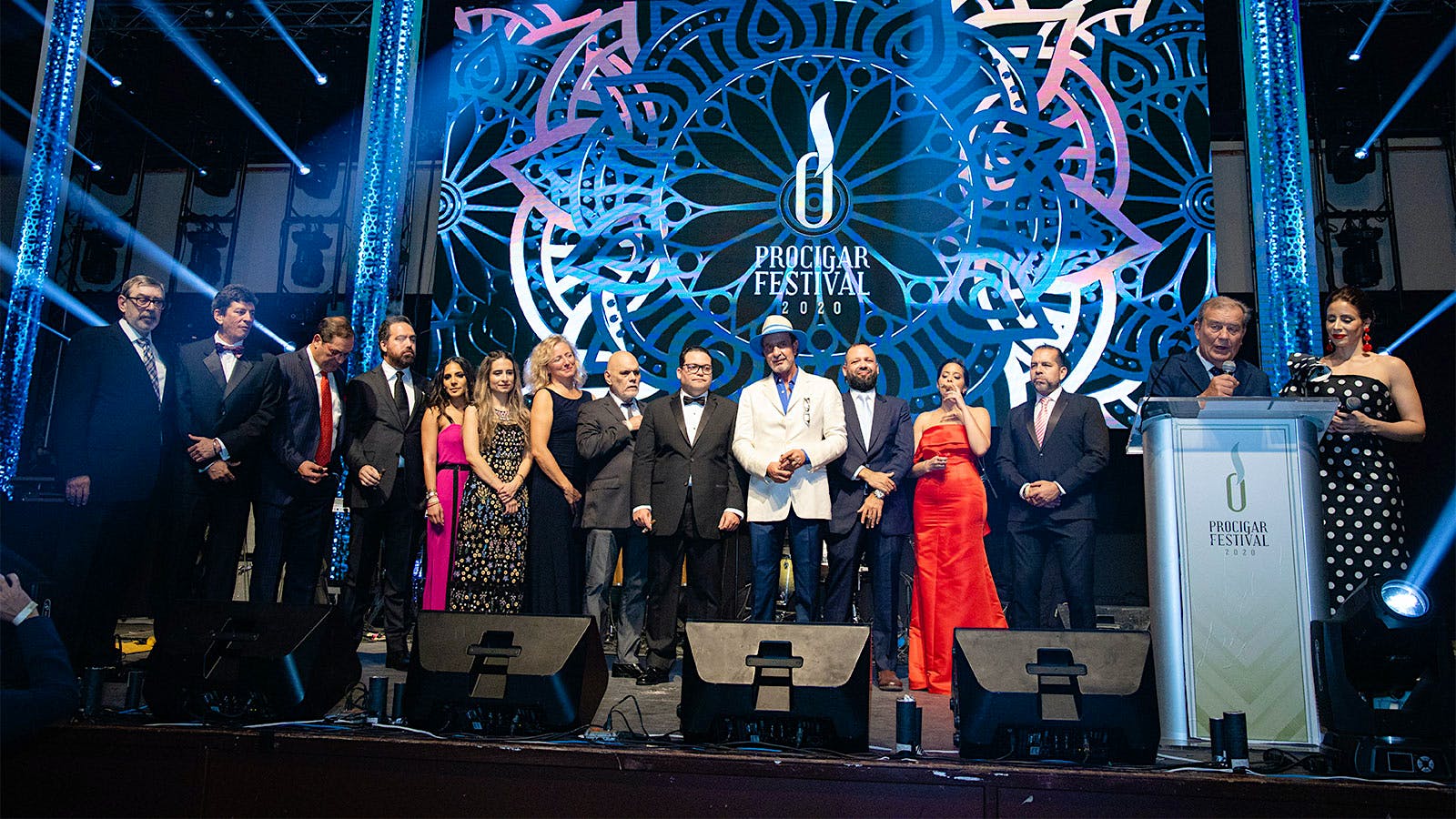 The principal members of ProCigar address the crowd during the final evening Gala Dinner Party.

The week concluded that evening at the Final Gala Party, which took place at Centro Español, a private club founded in 1965. Upon arrival, guests were handed a special sampler box of cigars manufactured by Vrijdag Premium Printing as well as a glass of Champagne handed out by a wall of mystery hands.

After a delicious dinner, the event continued with its annual auction where one-of-a-kind items are put on the block for various Dominican Republic charities. This year’s auction, conducted by Michael Herklots of Nat Sherman International, raised $178,700 for the Voluntariado Jesús con los Niños and the Hospicio San Vicente de Paúl, nonprofit organizations dedicated to helping ill children and low-income elders, as well as a new charity called A Home For a Family, which aims to build homes for disadvantaged yet deserving artisans.