Share
A buncher applies the binder leaf to hold together the filler tobacco. Afterward, it’s placed in a mold before it's put into a cigar press.

About 25 miles outside of Santiago in the Dominican Republic is a town called Navarrete. And in the middle of the town is about 20 acres of farmland that grows one of the rarest types of tobacco in the entire country: wrapper leaf.

The farm is owned by famed grower Leo Reyes, brother to Augusto Reyes and uncle to Nirka Reyes, who operates the family-owned factory Del Los Reyes Cigars. I’ve always heard about the great tobacco that Leo Reyes grows in Navarrete, and today, thanks to the ProCigar tour, I got to see it. 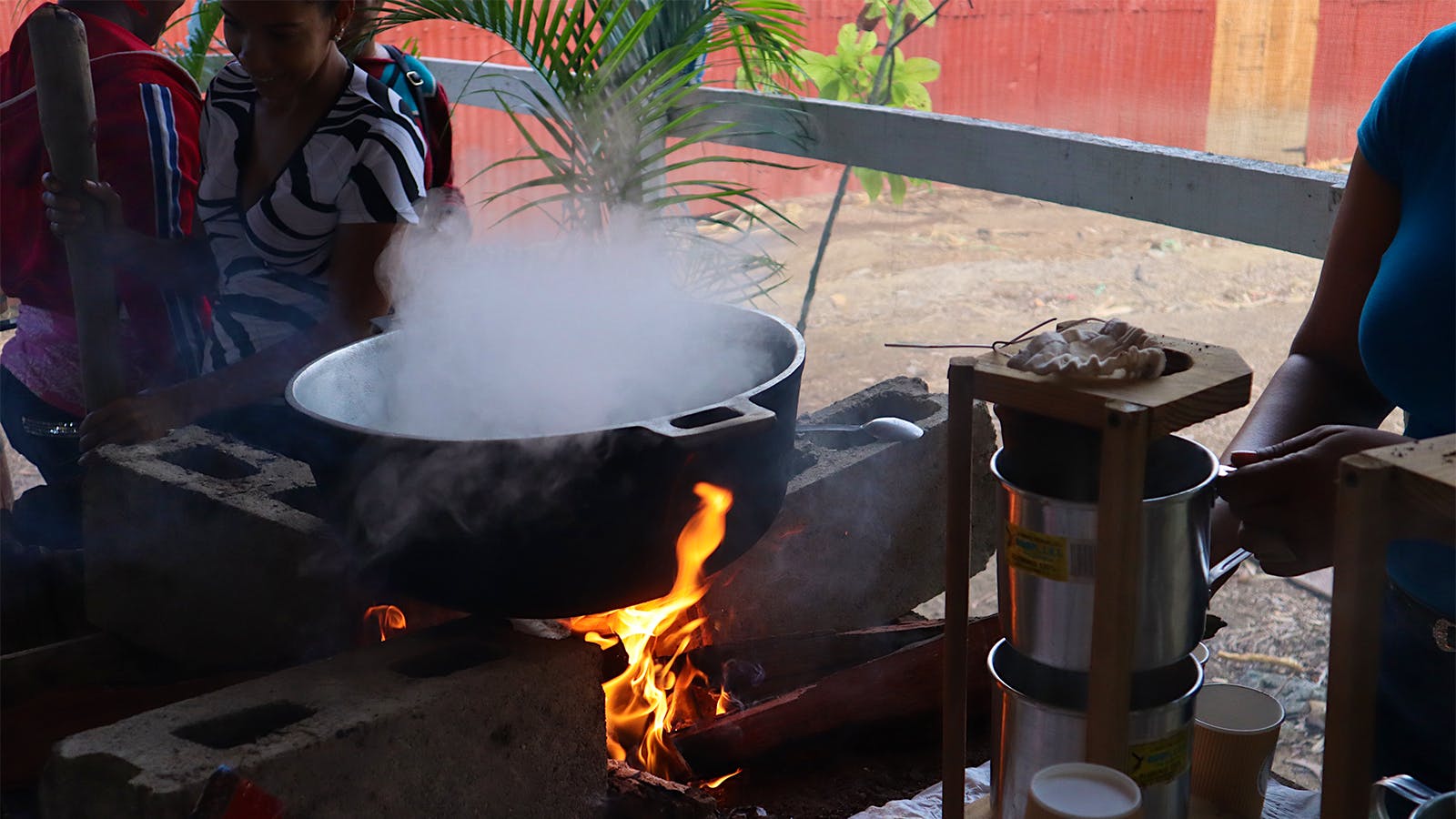 The morning farm tour starts with coffee made the old-fashioned way: on the left, a woman crushes the beans in a large mortar and pestle. Boiling water is then poured over the coffee.

First, let me give you a bit of history. The farm was created in 1961 before the municipality was fully developed. Normally, as a town grows and expands, any farmland is eventually paved over in place of shopping centers, parks or affordable housing. Not the case here. Instead, the town of Navarrete grew around the farm. Called the Navarrete Farm, it boasts the first plantation in the Dominican Republic to grow the Piloto Cubano tobacco varietal. 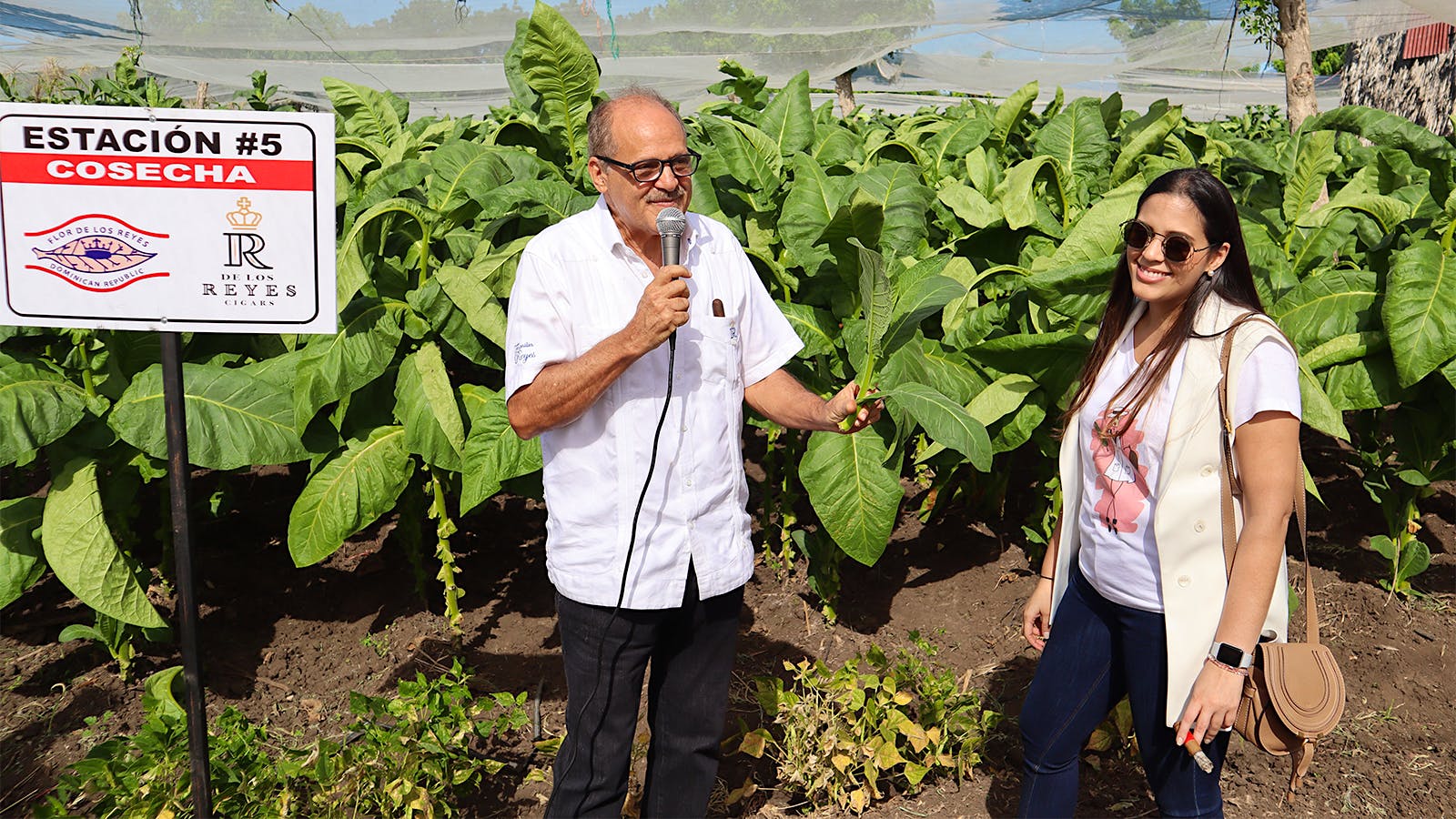 Tobacco grower Leo Reyes and his niece Nirka explain the process of growing wrapper. These particular plants are near maturity at more than six-feet high.

Now that the season is almost over, a good amount of the tobacco had already been harvested by the time I got there, but there was still a decent amount of wrapper leaf in the ground.

Here are some stats. The farm is somewhere between 20 and 30 acres. When I asked, both Leo Reyes and Augusto tried to convert the number from hectares to acres, and neither could quite agree on the exact number.

The varietal that Reyes uses for wrapper is called Negrito. I can’t overstate how rare it is to find quality wrapper leaf in the Dominican Republic. Most farmers won’t even attempt to grow it, but Reyes has been able to find success on this relatively small plot of land.

This year, he expects to produce 20,000 pounds of tobacco, most of it wrapper. Anything that doesn’t make wrapper grade will be used as binder. Because wrapper needs to be cleaner, thinner and more pristine, all the Negrito tobacco is grown under shade. 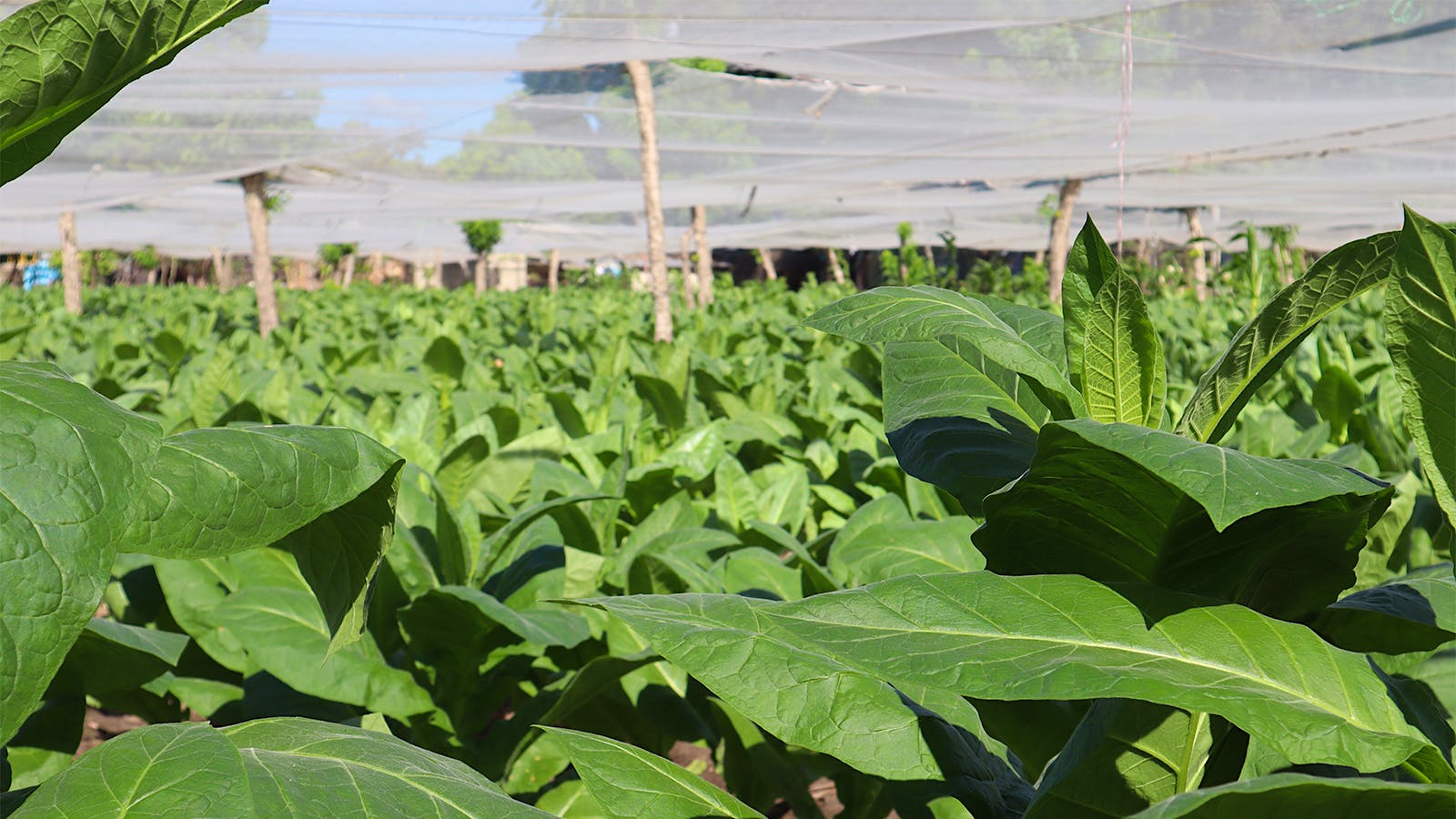 A tented field of Negrito tobacco. The netting filters the sun’s rays to make sure the tobacco doesn’t become too thick or coarse, as most of these leaves are cultivated to be wrappers.

As you might expect, high-quality Dominican tobacco won’t come cheap. If you want to buy Leo Reyes’ wrapper, it will cost about $23 per pound. That’s after its been aged and fermented by Reyes. For those of you not in the tobacco industry, $23 a pound is quite pricey—although apparently not too pricey for a Chinese buyer. A few years ago, a Chinese company that makes cigars in China bought Reyes’ entire crop of wrapper leaf in one shot. Not sure exactly where it ended up. 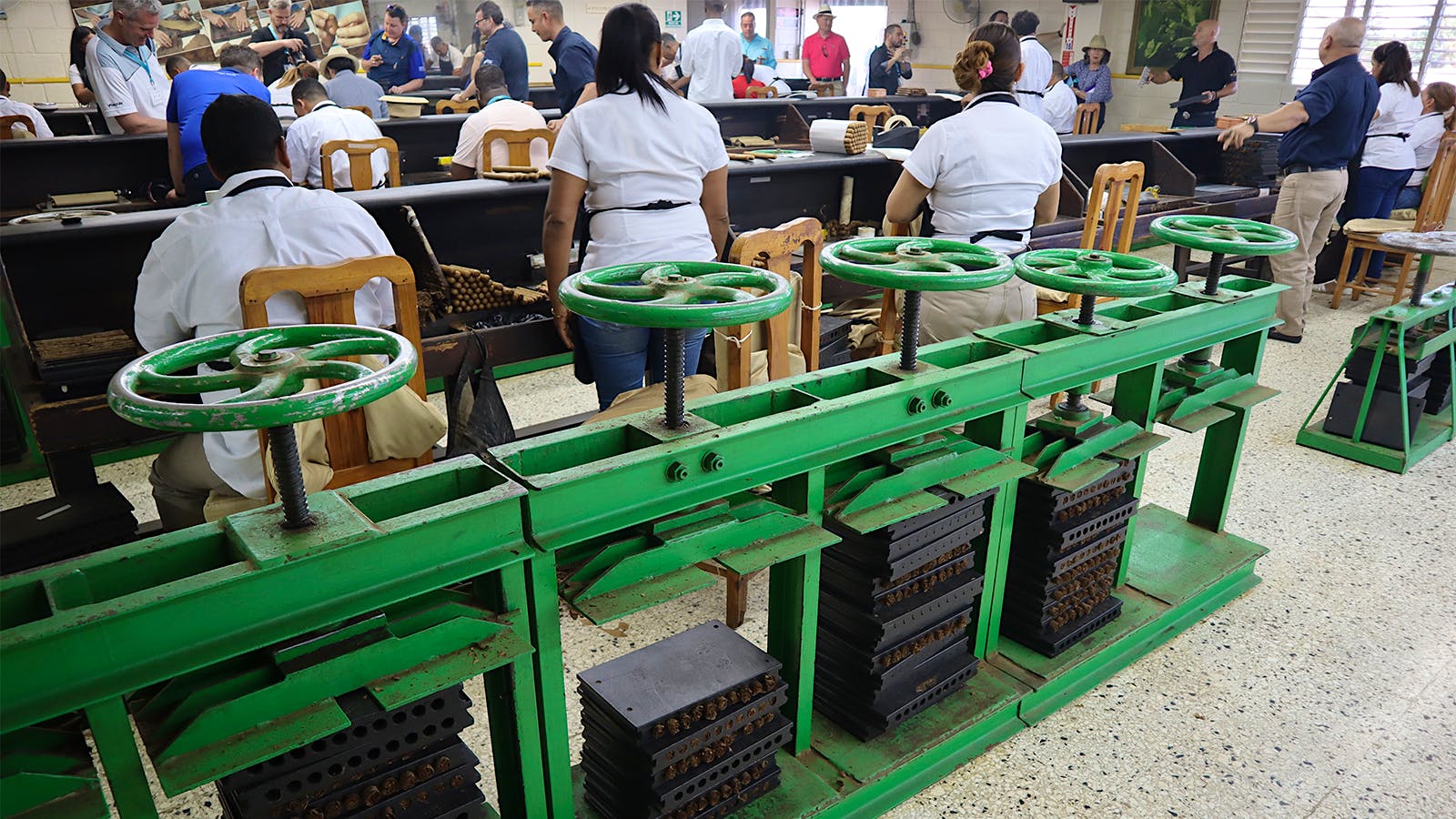 In the rolling gallery, members of the tour get the opportunity to try their hand at making a cigar. The crank-wheel presses in the foreground help to give cigars their shape while still in the molds.

As for the De Los Reyes factory, it’s still a boutique operation with only a handful of rollers concentrating on the factory’s major brands: Saga, Saga Short Tales and Don Julio. Those are the brands owned by the Reyes family. The factory also makes contract brands like Patoro, Debonaire and Indian Motorcycle.

Do you remember when this factory was called Corporacion Cigar Export, or CCE for short? In 2015, Nirka changed the name to honor her family’s name. Currently, the factory produces between 2 million and 2.5 million cigars a year and much of the tobacco comes from Leo Reyes—not just from the Navarrete farm, but from other farms he cultivates throughout the Dominican Republic. 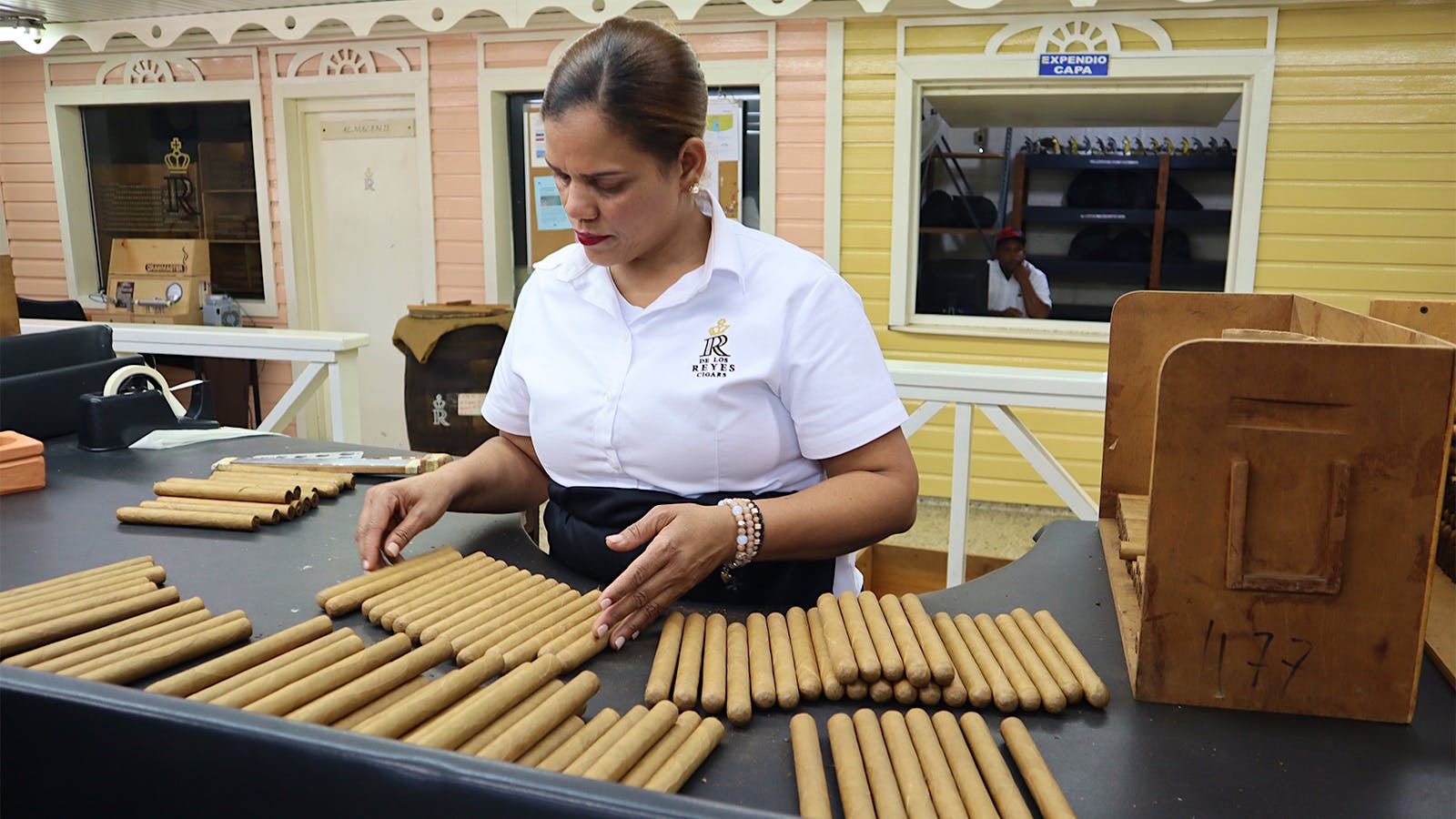 Cigars are sorted by color to make sure a full box of smokes looks uniform from the first cigar to the last.

Like with all ProCigar tours, we were handed plenty of cigars to smoke while strolling the tobacco fields and then later, while walking through the factory. At the end, everyone was handed a nice guayabera shirt and a gift pack of six cigars on their way out. This is perhaps the strongest point of the festival—the sheer number of cigars everyone walks away with.

I remember touring the De Los Reyes factory back when it was still called CCE. Its quaint appearance and lack of pretension always appealed to me, but back then, the tours were usually on the smaller side. On this last tour, I have never seen so many visitors to this factory in the 10 years I’ve been attending the festival. I guess word got out.