I’ve ignored them over and over, again and again, moving right past them as I head to the humidor. I’m talking about the house-rolled cigars you’ll find in just about every cigar shop here in Havana. If you’ve shopped here, you may have ignored them, too.

When it comes to appearance, these Cuban cigars are easy to dismiss. They’re plain, unbanded smokes, typically with a rougher, more rustic look than their boxed counterparts. But they can be quite good, and they’re something that you should try if you visit Havana.

Rob Fox, of the London/Irish retailer James J. Fox, always pays attention to the house-rolled smokes on his visits here. “When I’m in Cuba, I want to try something I can’t find elsewhere,” he told me today. “If you find the right roller, you know it’s rolled by an apt person, as opposed to coming off a bench.” 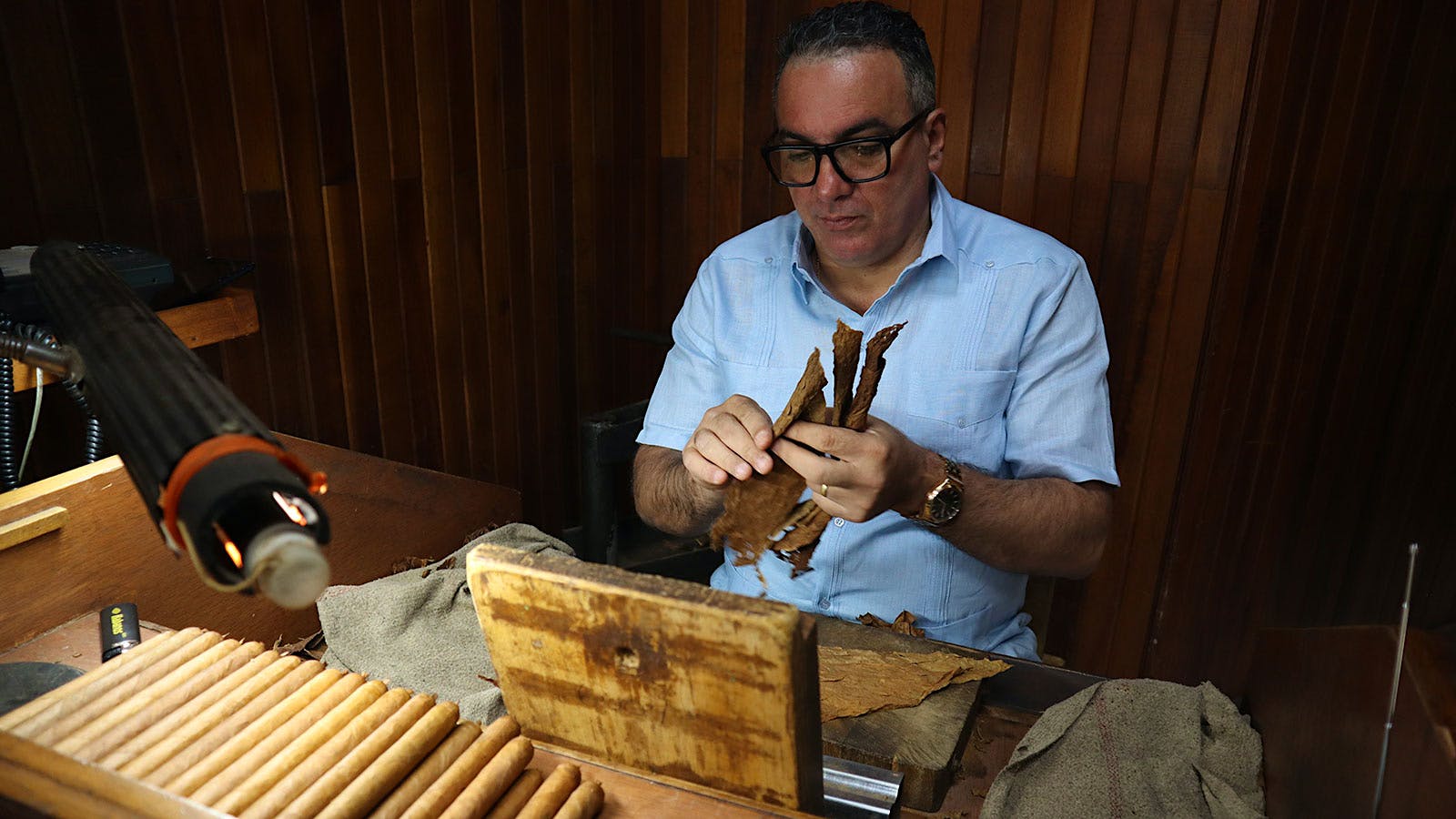 A cigar roller carefully crafting a Monsdale—the specialty of the house—at Club Habana.

Each of Cuba’s Casas del Habanos has a small table where a roller sits, crafting cigars to be sold on site. The rollers in cigar stores work sporadically, sitting down now and then to make cigars. If you’re lucky, when you walk in you’ll see the person in action, but no matter the time that you arrive you’re likely to find house-rolled cigars for sale. You’ll typically find them in a few, familiar sizes, perhaps a pirámide, a corona, robusto and a Churchill.

They’re quite cheap. In a town where most non-Cohibas retail for 9 CUCs (about $10) and up, these typically go for 5 or so CUCs. You can’t expect the same experience as a regular cigar: the construction might not be quite as good, and two coronas from the same shop won’t necessarily taste the same, as the worker is limited in terms of the types of tobacco he or she uses to make the smokes. But for a change of pace, they’re quite fun.

I’m staying at the Meliá Cohiba on this trip, and the hotel’s Casa del Habano is where I do most of my writing. I’m here with Greg Mottola, a man who contains his excitement at just about everything. So when I looked up from my laptop the other day and saw him smiling from ear to ear, I knew something was up. He was puffing on a cigar without a band. “This cigar,” he said, taking a big puff. “It’s delicious. And it’s only 5 CUCs."

I followed his lead and bought one too, and he was right. It’s a tasty smoke, a corona gorda, just the right thing for a half hour or so of puffing. Was it a 90 pointer? Probably not. Was it worth the five bucks? Absolutely. 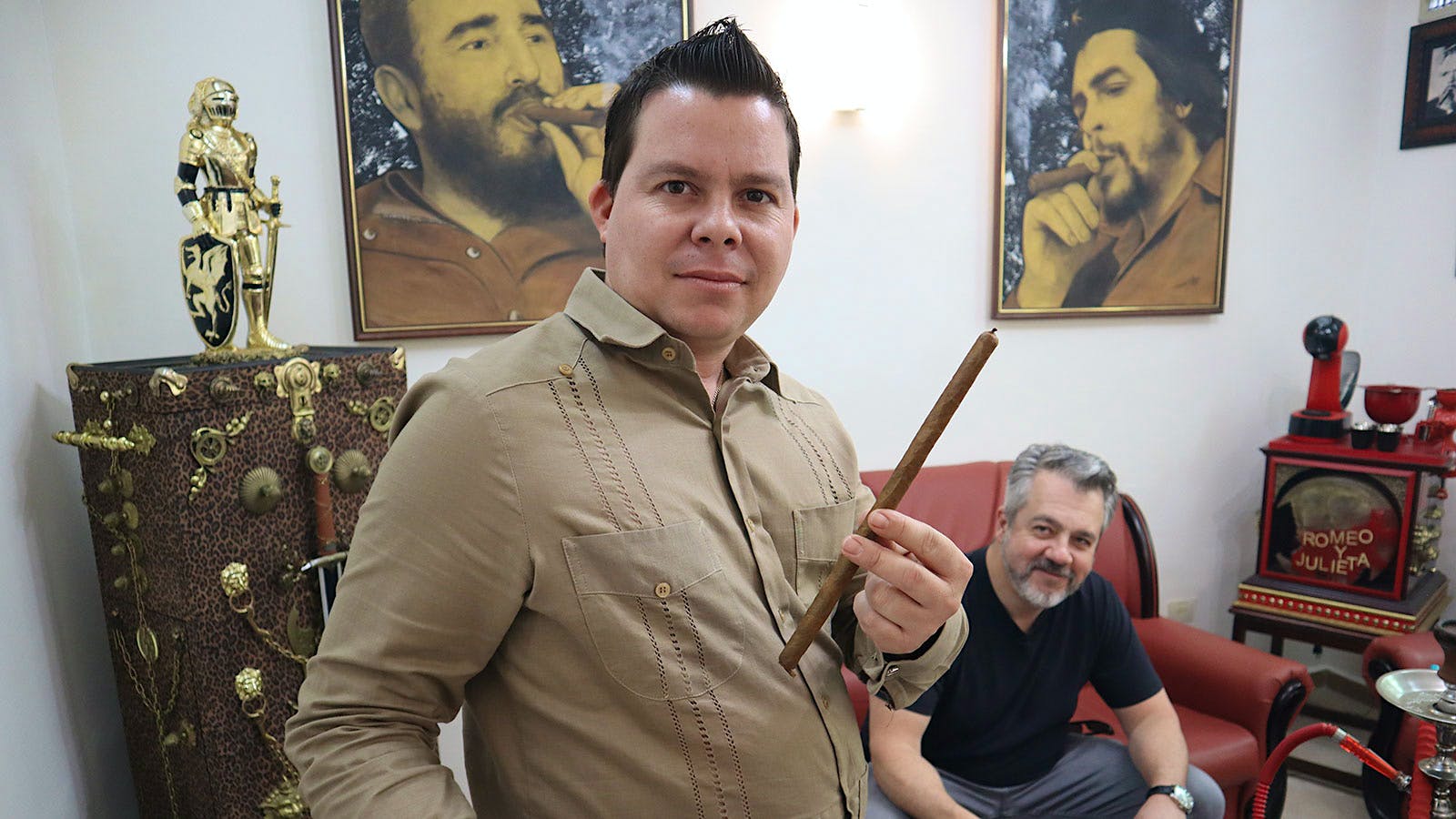 The most famous of house-rolled cigars is the Monsdale, made at Club Habana. It’s the length of a Lonsdale, but almost as skinny as a lancero, with a flag cap and an uncut foot. I’ve gone to this cigar shop on each of my visits to Havana, and it’s hard to leave without buying one. They sell for 5 CUCs, and they’re delicious.

The Casa del Habano at the Conde de Villanueva has long been known for its house-rolled smokes. One retailer I know goes there all the time, and orders shortish, ultra-fat smokes that look as thick as bowling pins.

The cigar shop at the Comodoro Hotel has been completely refurbished, outfitted with a comfortable smoking lounge. The house roller there is a man named Alejandro Gonzalez Arias. Everyone calls him Alex. He’s 33 years old, and has been making cigars for about a dozen years. He makes beautiful cigars (his pirámides are extraordinary) including some with crazy dimensions. He handed me what he calls his Double Lancero, a cigar that’s about 11 inches long with a 38 (or so) ring gauge. He told me it’s the toughest cigar he’s ever had to roll. I’m looking forward to trying one—but I’m not sure when I’ll have the time.

When you try a house-rolled cigar, ignore any tales of how someone will make you a Behike (they won’t) or a Montecristo No. 2 (it won’t be the same) and instead embrace the flavor and experience of smoking something that you really can’t get somewhere else.