It was all about Cohiba last week in Havana when Habanos S.A. celebrated the 55th anniversary of its most famous brand, which is marketed not only as an ultra-premium cigar, but as a global luxury product. The three-day event ended with a new record when a massive Cohiba humidor was auctioned for $2.8 million—the highest bid ever made in Habanos auction history.

This may not have been a full-blown Habanos Festival in the traditional sense, but the celebration served as a mini-Festival of sorts, and included many aspects familiar to festival-goers such as a tour of the El Laguito factory; cigar banquet evenings; an auction of one-of-a-kind humidors and a preview of the Cohiba 55 Aniversario Edición Limitada cigar for 2021. 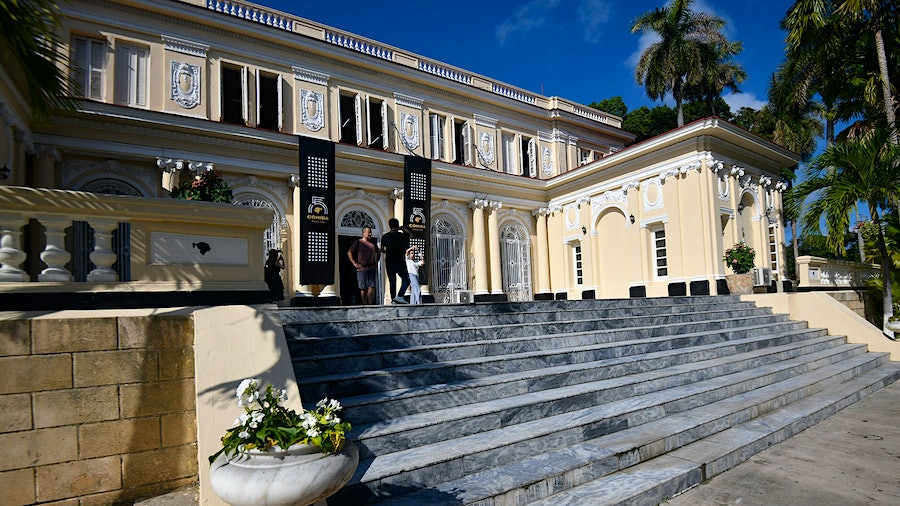 Attendees of the celebration were granted rare access to El Laguito, the converted mansion that now serves as the mother factory for the Cohiba brand.

Habanos reports that approximately 650 guests from around the world came to Havana for the scaled-down celebration, an intimate affair when compared to the thousands of visitors who normally flock to the official Festival.

It all kicked off with a Cohiba party at El Laguito Protocol Hall, which has been the venue used by Habanos for many Festival events in the past. Cohiba was the theme and guests were handed a variety of cigars, including Cohiba Robustos and Cohiba Novedosos, a cigar made exclusively for La Casa del Habano retailers. The Novedosos are still an elusive smoke. Spain threw a release party for the cigar back in 2019, which suggested that a global release was imminent, but most of the world has yet to see this cigar. Welcome speeches were made by Habanos co-presidents Inocente Núñez Blanco and Luis Sánchez-Harguindey, and the night was scored by live music. 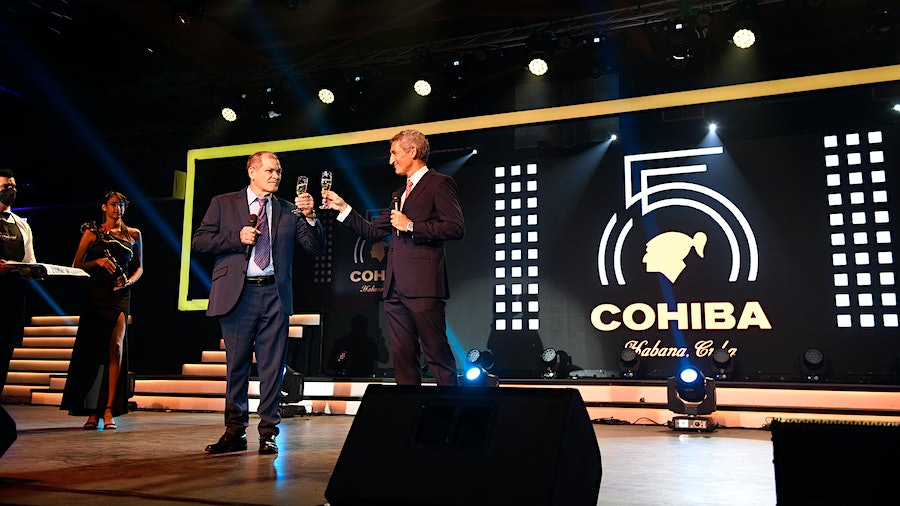 Habanos co-presidents Inocente Núñez Blanco and Luis Sánchez-Harguindey make a toast on the final night of the Cohiba 55 Aniversario celebration.

The Cohiba theme continued the next day with a tour of El Laguito, the stately converted mansion that serves as mother factory for the Cohiba brand. This facility is normally off limits to the general public, but on occasions like this, Habanos allows supervised, guided tours for participants of the celebration. For those interested in how Cohibas and other brands are constructed, the tour offers some fascinating, step-by-step insight.

The mini-Festival concluded on Friday in typical festival fashion at the PabExpo convention center, where Cohiba continued to be feted with a full dinner, live entertainment and an auction of humidors. A variety of Cohiba cigars were passed out that evening, most notably the Cohiba Ambar, Cohiba Ideales (both unreleased) and, of course, the Cohiba 55 Aniversario. 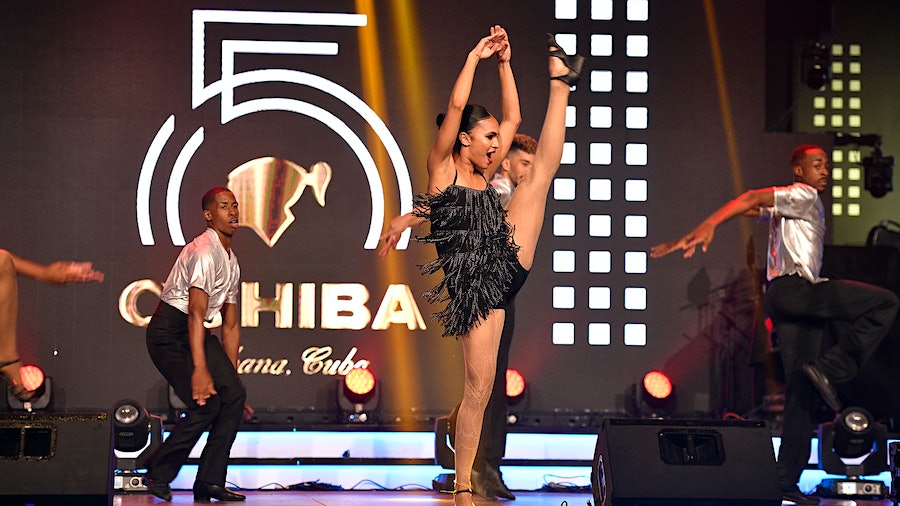 Dance performances like this kept spirits high during the final gala of the three-day anniversary event.

An awards ceremony honoring the Habanos Man of the Year for 2020 and 2021 saw six new inductees: Eulalio Bejarano and Riad Boukaram in the Business category; Walid Saleh and Angel García Muñoz in the Communications category; and Vicente Fausto Torres and Nelson Rodriguez Lopez in the Production category. 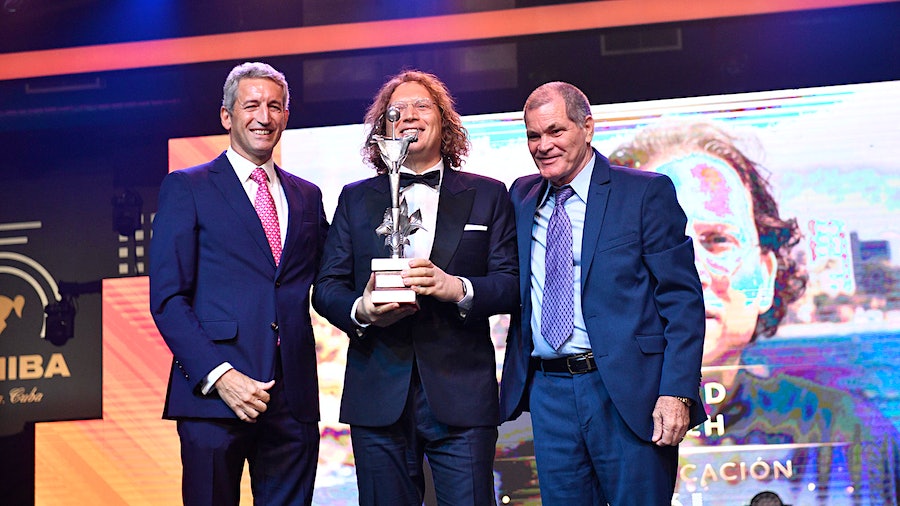 Walid Saleh holds his Habanos Man of the Year trophy presented by the Habanos co-presidents. Saleh is CEO of Phoenicia Trading A.A., one of the largest distributors of Cuban cigars in the world.

After the trophies were presented, the evening went into high drama when the auction commenced. Two unique humidors were on the block, one a fairly modest lot of Champagne and cigars, and the other, show-stopping colossus. The smaller lot was an Ellie Bleu humidor that holds a bottle of Champagne Rare Millésime 1988 and 44 Cohiba Ambar cigars. An extra batch of 48 more bottles were also part of the lot—24 from the 1988 vintage and 24 from 2008. 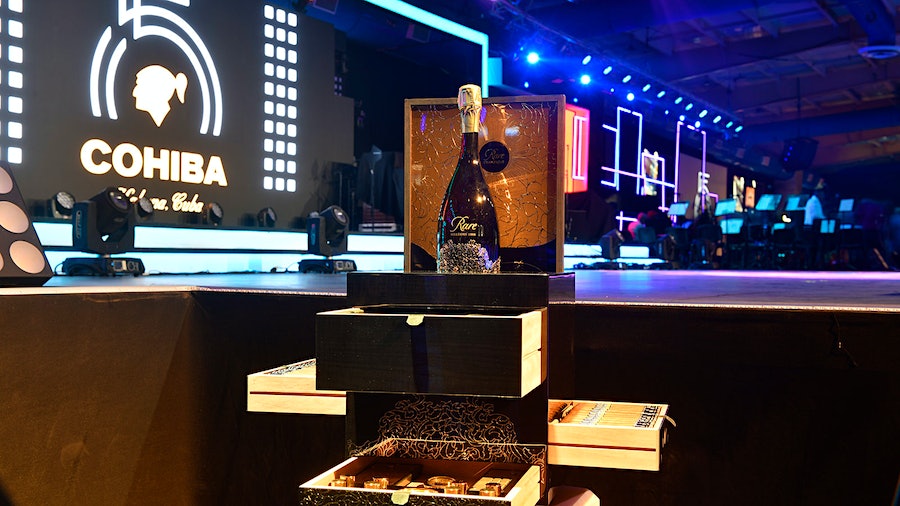 One of only two auction lots, this set of Champagne and cigars closed at 100,000 euros.

But that lot was immediately overshadowed by the main auction item— a large, cavernous humidor made with cabinets, compartments and drawers that hold 550 cigars, all of them Cohiba, some of which are limited editions, others from the regular-production portfolio. History was made that evening when Jimmy Ng, a cigar collector from Singapore won the lot for 2.8 million euros ($2.8 million), the largest bid ever placed at a Habanos auction. As with every Festival auction, proceeds are intended to help fund Cuba’s public healthcare system.

After the auction was over, the night ended with a performance by English singer and song writer James Morrison. 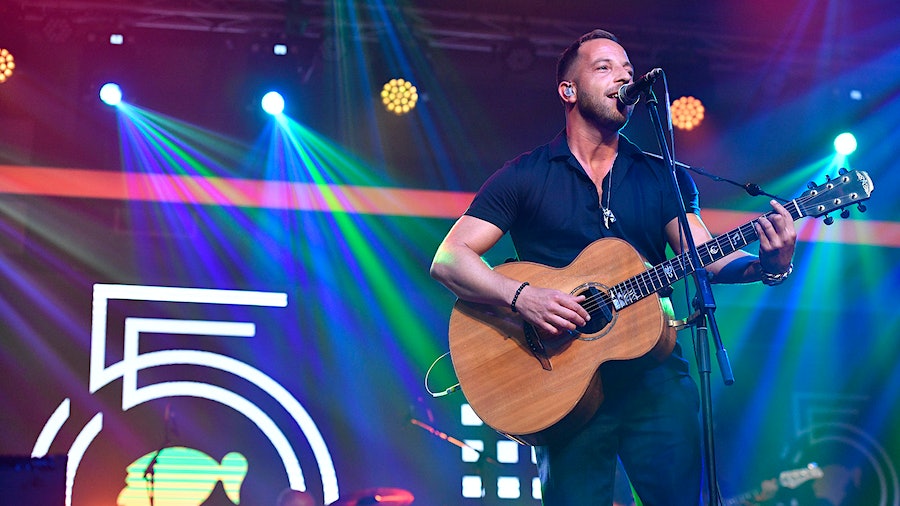 The evening ended with a performance by English singer and songwriter James Morrison.

It should be noted that the Cohiba brand turned 55 last year, but festival cancelations in 2021 and 2022, coupled with logistical difficulties caused by the pandemic, delayed the anniversary celebration.

In what could be considered one of the ultimate collections of special-edition Ramon Allones cigars, …

Another humidor auction record has been broken. Last week, at the Cohiba 55 Aniversario celebration …