Collecting cigars can be an expensive hobby. Collecting cars, even more so. Michael Weil, chief executive officer of AR Global Investments, does both. And he’s as passionate about tobacco as he is about high-end automobiles, but the draw of collecting for him doesn’t stem from vanity or obsession. It’s more the idea that cars and cigars can bring people together, which is why he’s invested so much time and so many resources into building the ultimate cigar room. A cigar-smoking Xanadu, his impressive, high-end man cave is its own separate structure sitting adjacent to his home in Newport, Rhode Island.

“My wife has a yoga studio right above my cigar room, so ventilation is key,” says the silver-haired 55-year-old with a chuckle. “She doesn’t smell cigars, so thankfully it’s working.” 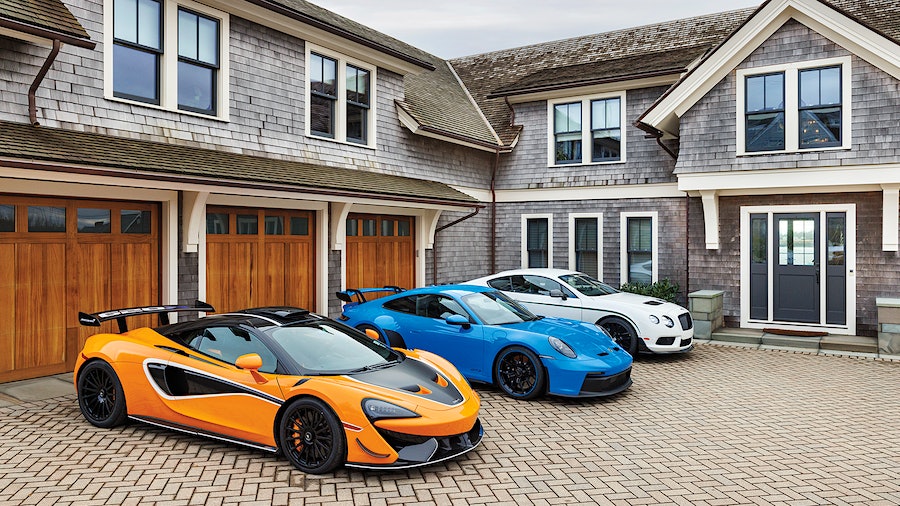 Exotic cars like the McLaren, Porsche and Bentley shown here are only part of Weil's collection.

Construction of the home started six years ago and a separate cigar room was always part of the plan. Weil jokes that his seaside residence was actually built around his cigar room, which he always envisioned as a splendid comfort zone of design and function. Now finished, the space is close to 800 square feet and affords every amenity required to fully enjoy a cigar in style, including humidors, a fireplace, a dry bar, proper ventilation and even a picturesque view of Newport Harbor.

“It’s what I think of as a traditional smoking room,” Weil says. “The thing that’s most important is that I have a remote office set up, so I do quite a bit of work in my cigar room. Lots of conference calls, because it’s a part of my every day. I love to collect ashtrays and lighters and all kinds of cigar memorabilia. My humidors hold about 2,000 cigars.”

His armoire-style, double-door humidors are built into the wall like a trophy cabinet perfectly flush with the room’s other darkly-stained wood cabinetry and shelving. There’s nary an item that isn’t cigar related, and the entire space is beautifully framed by a parquetry border inlaid around the perimeter of the hardwood floor. Whether you notice the more subtle architectural flourishes like that or not, it’s the culmination of details that sets a warm tone for the perfect smoking experience, and that, of course, is the idea. Anyone can build a room and fill it with furniture and ashtrays. Creating true ambiance requires thoughtfulness and an eye for interior design. The project was undertaken by Parker Construction, a New England company that specializes in custom buildings, both commercial and residential, as well as historical restoration. 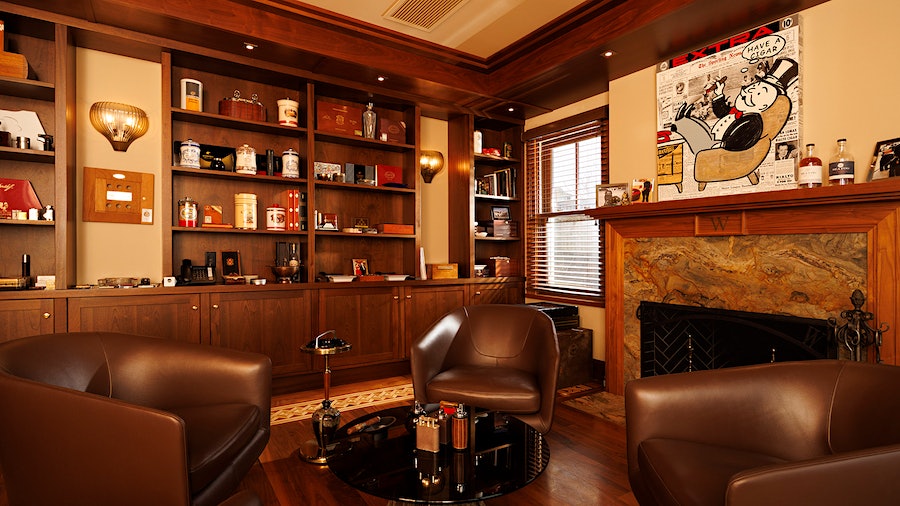 Four leather chairs serve as the centerpiece, making his cigar den as much about conversation as it is about smoking.

Weil began smoking about 15 years ago and fell in love with the hobby when someone passed him an Ashton VSG at a cigar event. Since then, he’s gone all in, fully committed to the smoky pastime and anxious to try new brands whenever he has the opportunity. Among his go-to cigars are Fuente Fuente OpusX, Davidoff, Padrón and limited-edition Cubans. Cigars like Cohiba Behike from the BHK series or OpusX Purple Rain add a bit of rarified glamour to a humidor already stocked with plenty of hard-to-find cigars.

It could perhaps be said that Weil also owns the automotive equivalent of these opulent cigar brands. His passion for car collecting started when he bought a convertible Ferrari F430 back in 2013. Like cigars, the collection only grew, and now includes a range of vintage and exotic vehicles like a 1967 Corvette Stingray 427, a Lamborghini Huracán STO and a coterie of Porsches from the 1644 356 convertible all the way up to the new 2022 911 GT3. He has about 30 cars in his collection, ranging from 1960s era to modern. “It’s an amazing privilege,” he allows.

As much of a cigar lover as he is, you won’t catch Weil smoking in any of his cars—save for one. 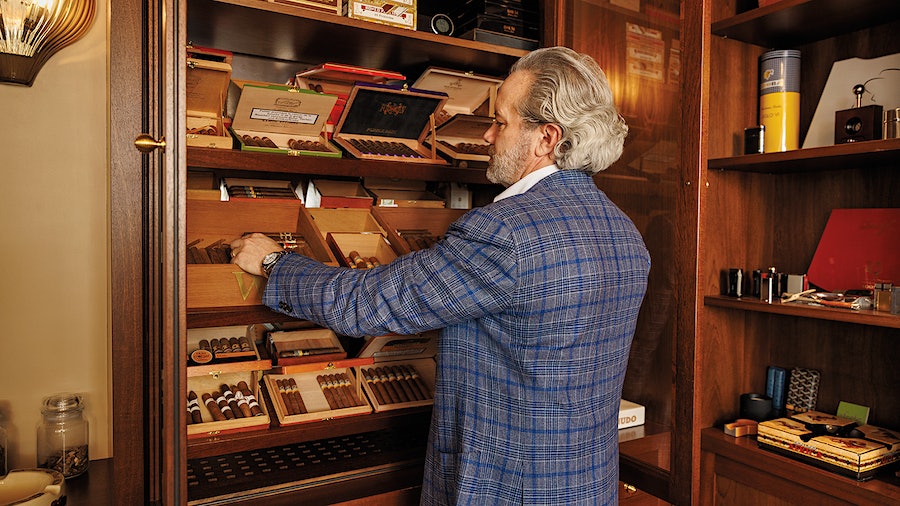 Weil opens the double-doors of his humidor and selects from a diverse, well-curated collection of around 2,000 cigars.

“I have one car that I smoke in, a Land Rover Discovery Turbo Diesel designed for safaris and the bush,” he says. “I don’t smoke in any of the cars but that. I see Arnold [Schwarzenegger] in his Hummers and he always has his Partagás lit, and I thought, ‘There’s got to be one that I can smoke in too.’”

Often, Weil lends out a few of his cars to the Audrain Auto Museum in Newport, which he cofounded in 2014 as a passion project. “Nobody benefits from these cars being locked away,” he says. “We ended up building this beautiful museum in Newport and we developed an event called Cars & Coffee where we’ll have 500 or 600 people register to bring their cars on a Sunday. Like cigars, it’s all about community. A guy who has a Camaro is parked next to a guy with a 2020 Ferrari and they realize how much they have in common. That’s where we see the value of it. It’s really about building the friendly community.”

Like his garage, Weil’s cigar room is a showcase for the rarities and exclusive releases that he’s acquired over the years—decorative collectors’ jars, vintage lighters, etc. But what’s the point of a collection if there’s nobody there to see it? By his own admission, Weil is more than happy to host cigar-loving guests. 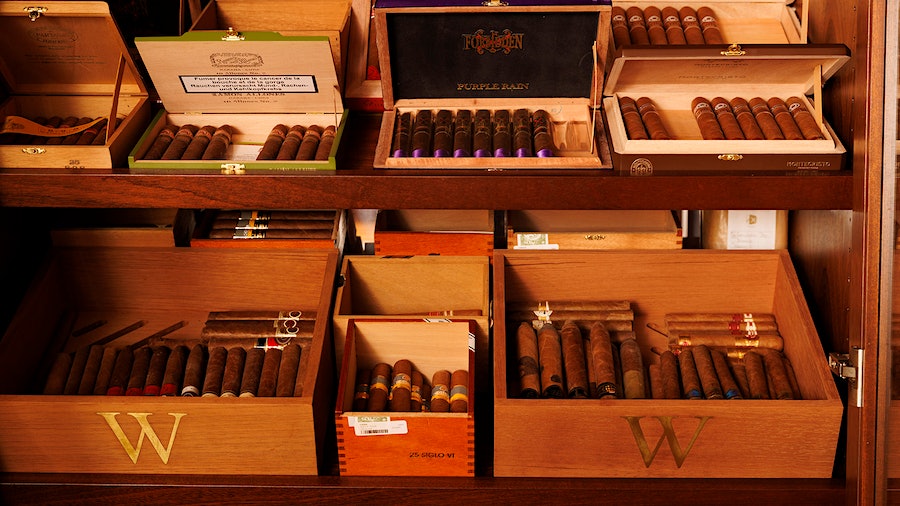 “The smoking room is an amazing way to get to know people,” he says. “So-and-so would love to see your cigar room, and I’m like, ‘Great, bring them over.’ I’ve done business deals here and had great fun. That’s what it’s there for.”

Weil is a daily smoker. On the weekends, he’ll usually light up in the morning and afternoon. During the week, smoking time falls in the late afternoon or evening. When he’s away from his smoking room, Weil sees traveling as the perfect way to build his collection. He’s traveled to London and purchased a Cuban Davidoff because he craved the unique experience of such a celebrated, aged cigar. But despite the high price of Cuban Davidoffs, Weil still has his limits on how much he’ll spend. One overpriced cigar in particular stands out in his memory.

“My wife and I were in Marrakesh on vacation and went to a cigar lounge,” he recalls. “They had a special Ramon Allones. I asked about the cigar, and someone translated it to $800 a stick. There’s no way I’m paying $800 a cigar. No set of tobacco leaves is worth that much. I got back to New York and called my sources and we were able to find a box. It was the Ramon Allones Phoenicio 30th Anniversary.” 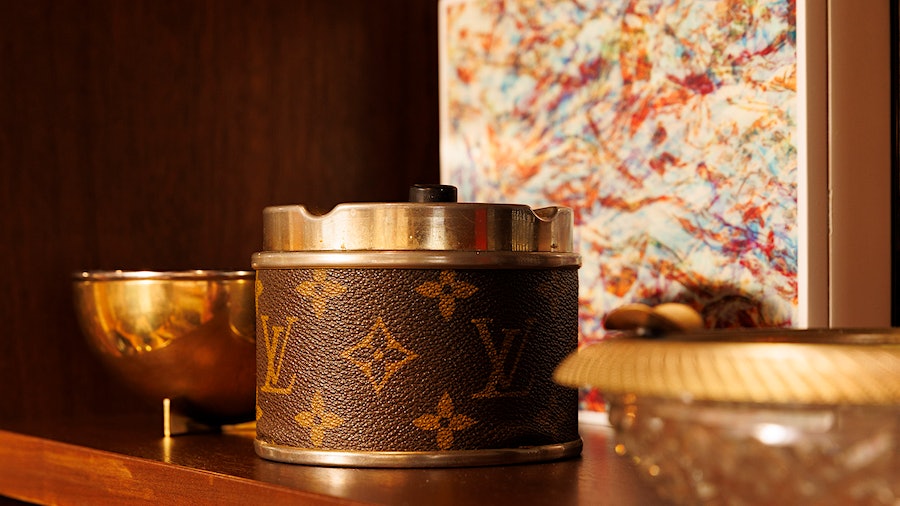 Something old and something new. Some of Weil's cigar accessories are museum-quality pieces, while others are more contemporary.

A good amount of Weil’s time was spent in New York City before the pandemic, especially at Grand Havana Room, a private cigar club on the 39th floor of a Fifth Avenue office building. To the dismay of its membership—including Weil—it closed its doors in 2020 for renovation, leaving many of Manhattan’s cigar fans in the lurch. Before the Grand Havana Room was gutted, Weil emptied his cigar locker and packed up his smokes. What he didn’t know was that someone who worked for him secretly arranged to take an extra souvenir from the club: the door to Weil’s cigar locker. With its engraved nameplate, the refinished door is now mounted to a wall of his cigar room as a reminder of the sweeping city views and camaraderie of Manhattan’s most exclusive cigar club, so there’s a little New York enshrined in Weil’s Newport cigar lodge.

If the room is at all a reflection of the man, then Weil is as engaging and inclusive as he is meticulous. Four leather chairs serve as the centerpiece, making his cigar den as much about conversation and shared, common experiences as it is about smoking.

“I really have built this collection from traveling so much,” says Weil. “If it’s a good friend, or someone I know really enjoys cigars, I’ll ask, ‘What’s the one cigar you’ve always wanted to smoke?’ Chances are, I have it.”