It’s no secret that brown leaves and brown liquids make excellent partners for smoking and sipping together. It’s harder to determine what cigar pairs best with what spirit. So many combinations exist that you’ll probably never know, but one thing is clear: Bourbon is one of the surest places to start.

The American whiskey, based on corn and aged in strongly charred oak, is so subtly sweet and endowed with rustic notes that it is nearly impossible to find one that isn’t at least a friendly connection to a fine cigar.

Born in the American colonies, using a newly available grain—corn—Bourbon developed into an elegant quaff with strict standards (especially as a straight whiskey). Kentucky, the drink’s traditional home, has a long relationship with cigars from its storied racetracks to the cigar event that is part of the annual Kentucky Bourbon Festival. Everybody’s bucket-list Bourbon, Pappy Van Winkle, displays its namesake puffing a cigar on the label.

The tradition has survived through generations: The young principal in Angel’s Envy, Kyle Henderson, keeps a collection of 3,200 cigars and considers how they’ll pair with each Bourbon he creates. But with the growth of craft distilling, Bourbon making has spread beyond the state, always retaining its connection to cigars. And this is a pairing that is hardly limited to men. Ladies are drinking more and more Bourbon, and one of the most sought after personalities in the industry has used her outstanding sense of aroma to create a Bourbon specifically meant to accompany cigars. 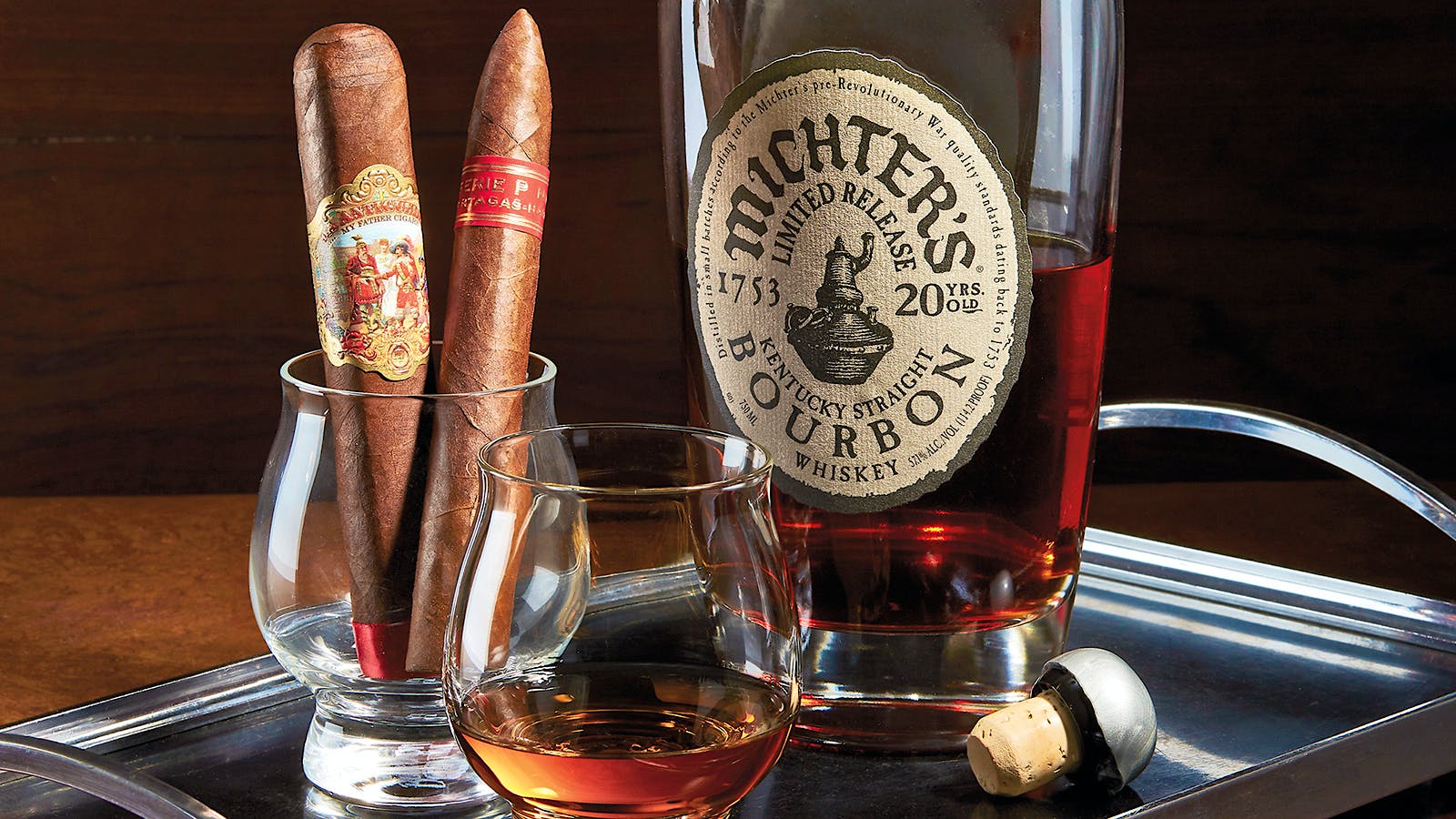 The My Father, as well as the Partagás, paired well with Michter’s 20 Year Old, exuding notes of cherry, leather and more.

We paired 16 Bourbons with two cigars to test our theory. One smoke was medium-bodied, the My Father La Antiguedad Toro Gordo, a box-pressed Nicaraguan that is full of sweet, toasty smoke redolent of raisins, toffee and clove. The 6-by-60 cigar retails for $8.80, and is from our most recent Top 25 list, with a score of 92 points.

The second cigar was a fuller-bodied Cuban, the Partagás Serie P No. 2, a figurado measuring 6 1/8 inches by 52 ring. The 90-pointer retails for £26.18 in the United Kingdom, and offers notes of black pepper, coffee bean and cappuccino, as well as leather and ginger. Some of the marriages between cigar and Bourbon were better than others, but none were disappointments.

Angel’s Envy 2019 Cask Strength Port Finish (122.4 proof, $200)
After retiring as the Brown Forman master distiller responsible for Woodford Reserve and Old Forester, Lincoln Henderson started the Angel’s Envy brand with his son Wes and grandson Kyle, by sourcing barrels and experimenting with finishes. Henderson died in 2013, and Wes and Kyle carry on his tradition of releasing a cask strength Port finish Bourbon every year. The latest is something of a fruit parade built on a toffee base, with lush notes of molasses and honey. With the My Father, licorice arises on the spirit and sweetness engulfs the cigar. The whiskey’s honey coaxes the same from the Partagás, while the cigar opens up its fruit.

Bardstown Fusion Series #2 (98.9 proof, $60)
The word “blended” can take a bad rap, but don’t toss this in with the down-market examples. This is a melding of varied straight whiskeys—a sourced 12-year-old and two of its own. Age balances with youth and produces a range from meaty fruits (apples and pears) to toffee and vanilla with hints of almond and pecan. It gets very tangy with the My Father and, at first, it clashes with the Partagás, then draws out campfire notes and becomes meatier.

Blanton’s (93 proof, $55)
Born in 1984, this is the first single-barrel Bourbon of the modern era. It honors Albert B. Blanton, the longtime president of the distillery now known as Buffalo Trace. It was created by another Bourbon legend and Blanton employee, Elmer T. Lee. Still a treat, its lush vanilla and caramel base support apple, grape, cinnamon, nutmeg and a pleasant gritty note. The My Father pairing delivers a bit of marshmallow to the mix, while the cigar becomes a bit gritty. The Blanton’s and the Partagás create a chocolate, leather and fruit confection.

Booker’s Batch 2019-04 “Beaten Biscuits” (126.1 proof, $80)
The high-octane Bourbon named for the legendary Jim Beam distiller Booker Noe has four special releases each year. This one is named for the neutral-tasting crackers Booker liked to pair with his Bourbon—but there is nothing neutral about this whiskey. Big Christmas spices on the nose meet like-strength vanilla, plenty of berries and cherries, cinnamon and pepper, as well as nuts. The My Father gets a blast of vanilla from the pairing, while the whiskey stands unmoved. The whiskey’s spice melds masterfully with the coffee notes of the Partagás, adding cocoa to the flavors.

Eagle Rare 10 Years (90 proof, $30)
An excellent value Bourbon for its age, Eagle Rare is made from select casks within the Buffalo Trace distillery. It lost its single-barrel designation when it was moved to a mechanized bottling line, but kept its full and complex flavor. Along with vanilla, it presents maple, toffee and molasses notes to match its orange, mint, almond and chocolate flavors. It loses some of its fruitiness when paired with the My Father, but adds barrel flavors. The Partagás draws out maple and leather from the whiskey, and gets a punch of sweetness in return.

Four Roses Limited Edition Small Batch 2019 (112.6 proof, $140)
Four Roses distinguishes itself by melding superior whiskeys using its wide range of mash bills (grain recipes) and yeast types. This special release furthers the cause by adding three different ages to the mix: a 21-year-old, two 15s and an 11. The mash bills are corn heavy, but there’s plenty of spicy rye due to the yeast. It has a mélange of fruit notes, with berries and apples. The My Father draws out a sultry quality to the whiskey. All is rosy with the Partagás pairing as the whiskey grows deeper and the cigar brightens with fruit.

Jefferson’s Reserve Twin Oak (90.2 proof, $80)
Trey Zoeller and his father Chet created Jefferson’s Reserve long before sourcing whiskey was chic, and came up with interesting wrinkles. This 10-year-old is further aged in barrels whose staves have been grooved for increased service area. The effect is unsurprisingly woody, but comes with charms of maple, almonds, Christmas pudding and black tea. The My Father finds its woody depth and the whiskey begets candy. The wood-on-wood combination with the Partagás is pleasant, if quite similar.

Joseph Magnus Cigar Blend (106 proof, $169)
One suspects complexity upon reading the words “finished in Armagnac, sherry and Cognac casks” on the bottle. Furthermore, this is a formulation of the renowned whiskey blender Nancy “the Nose” Fraley (see sidebar, page 69). But that may not prepare you for the wending joy ride ahead.

You start with berries, dates and figs and accelerate with an allspice mix of clove, cinnamon and nutmeg. On the first turn comes the expected caramel and vanilla rush. Then the brandies kick into gear, before tobacco, leather and chocolate stoke the afterburner. It’s superb with both smokes, uncovering plenty to like in the My Father (more spice and barrel flavors) and the Partagás pairing is a wow, with plenty of leather going to the spirit and the cigar taking on rancio flavors.

Kentucky Spirit (101 proof, $55)
This Wild Turkey whiskey is one of the early single-barrel Bourbons. Longtime master distiller Jimmy Russell created it by identifying outstanding barrels (with about nine years of age). Expect caramel and honey layered with nuts, berries and savory, piquant herbs. The spirit is too much for the My Father, but pairs very well with the coffee notes of the Partagás, conjuring cocoa and imparting anise.

Knob Creek Quarter Oak (100 proof, $50)
This latest Knob Creek takes the brand’s full-bodied style a step further with a special finish. The nine-year-old is rested in small casks for four years to increase contact with the wood, and is then mixed with standard Knob. It’s an even bolder take with a toasty charm to go with the whiskey’s signature brown sugar, vanilla, meaty fruit and orange flavors. Vanilla and toast rev up on the My Father, which seeks out spice on the whiskey. The Partagás brings out the leather of the whiskey, and gets back some fruit.

Larceny Barrel Proof (123.2 proof, $50)
This newly released, wheated Bourbon is a line extension of Heaven Hill’s 92-proof Larceny. The whiskey comes from select barrels and the boosted proof gives it more depth and a bit of bite. It’s very spicy, with baking spices on a maple and honey base with berries and nuts. Cinnamon comes with the My Father, and the whiskey confers sweetness on the Partagás, while becoming more tart.

Maker’s Mark Cask Strength (110.7 proof, $52)
For half a century, Maker’s Mark resisted line extensions to its original super-premium Bourbon. Now it has several, including Cask Strength, a high-proof version that has a punch with a spectrum of citrus, maple sugar, cocoa and graham cracker. Chocolate notes amp up with the My Father, which gets a nutty bump. A big bonbon bonfire erupts with the Partagás, with sweetness fusing with leather.

Michter’s 20 Year Old (114.2 proof, $700)
This Bourbon, re-released at the end of last year, is always in limited supply given its age and can fetch prices in the thousands of dollars. While Michter’s now has its own Louisville distillery, this is made by sourcing select casks, which are nursed into extended maturity.

This prize example brims with caramel, vanilla and maple sugar, tingles with cinnamon and nutmeg and finishes with bread dough, honey, cocoa and cherry hard candy. That cherry really shines with the My Father, while the cigar becomes far more leathery. The luxe balance with the Cuban is sublime: caffeinated leather together with a range of sweet and chocolaty choices.

Old Fitzgerald Bottled-in-Bond Fall 2019 Edition (100 proof, $150)
Bonded Bourbon guarantees certain standards in aging and proof, but this wheated Bourbon from Heaven Hill outdoes the regulations with 15 years of maturation. At this sweet-spot age, it exudes honey, caramel and vanilla, then adds dates, berries, butterscotch, anise and sassafras root. Its body builds on the My Father. Leather and coffee notes dominate with the Partagás, marrying with an herbal note.

Old Forester (100 proof, $30)
This bottling has all the proof and all the punch of the distiller’s bottled-in-bond release, but at a substantial savings. A mixologist’s favorite, it channels mulled spices, black cherry, orange peel, a maple-toffee-caramel continuum and enough licorice to hold its own with any additives. The Bourbon’s fruit added sweetness to the My Father, and allowed the Partagás to show off its spicy side.

Woodford Reserve Chocolate Malted Rye Bourbon (90.4 proof, $130)
Despite the name, this limited release is not a rye, nor does it contain chocolate. The title refers to how its rye malt content (15 percent) was roasted to a level at which its sugars caramelized into dark chocolate notes. Along with the advertised cocoa comes a note of coffee ice cream, toasty rye bread, anise, vanilla and a bit of cherry. There is a hint of nougat candy bar when paired with the My Father, and the Woodford gives off a savory nuttiness with the Partagás.