Share
On Saturday night, more than 1,000 cigar fans came from across the United States and from as far away as Romania, Australia and Canada to smoke together at the Big Smoke Florida at the Seminole Hard Rock Hotel & Casino.

The Hard Rock Hotel might be a tribute to the best rock and roll musicians in history, but on Saturday, the real rock stars of the evening were the cigarmakers of the handmade industry who came to Cigar Aficionado’s Big Smoke Florida for one, cigar-filled night at the Seminole Hard Rock Hotel & Casino in Hollywood, Florida. And the star power was undeniable, which is precisely why cigar lovers from all over the world are drawn to Big Smoke celebrations every year. 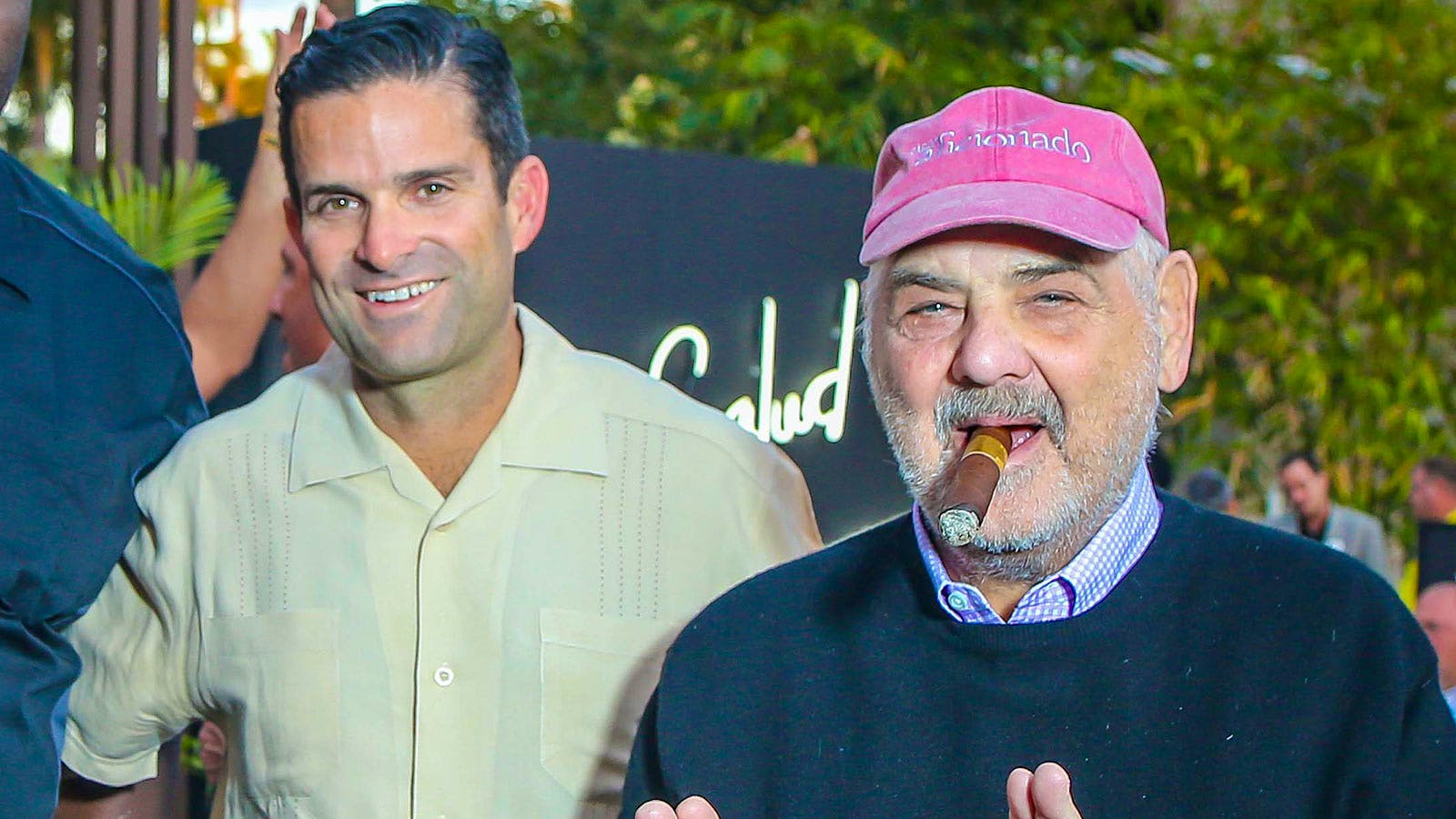 Big Smokes are opportunities to meet the people behind the cigars in a single evening. On Saturday night, more than 1,000 cigar fans came from across the United States and from as far away as Romania, Australia and Canada to be at the event. 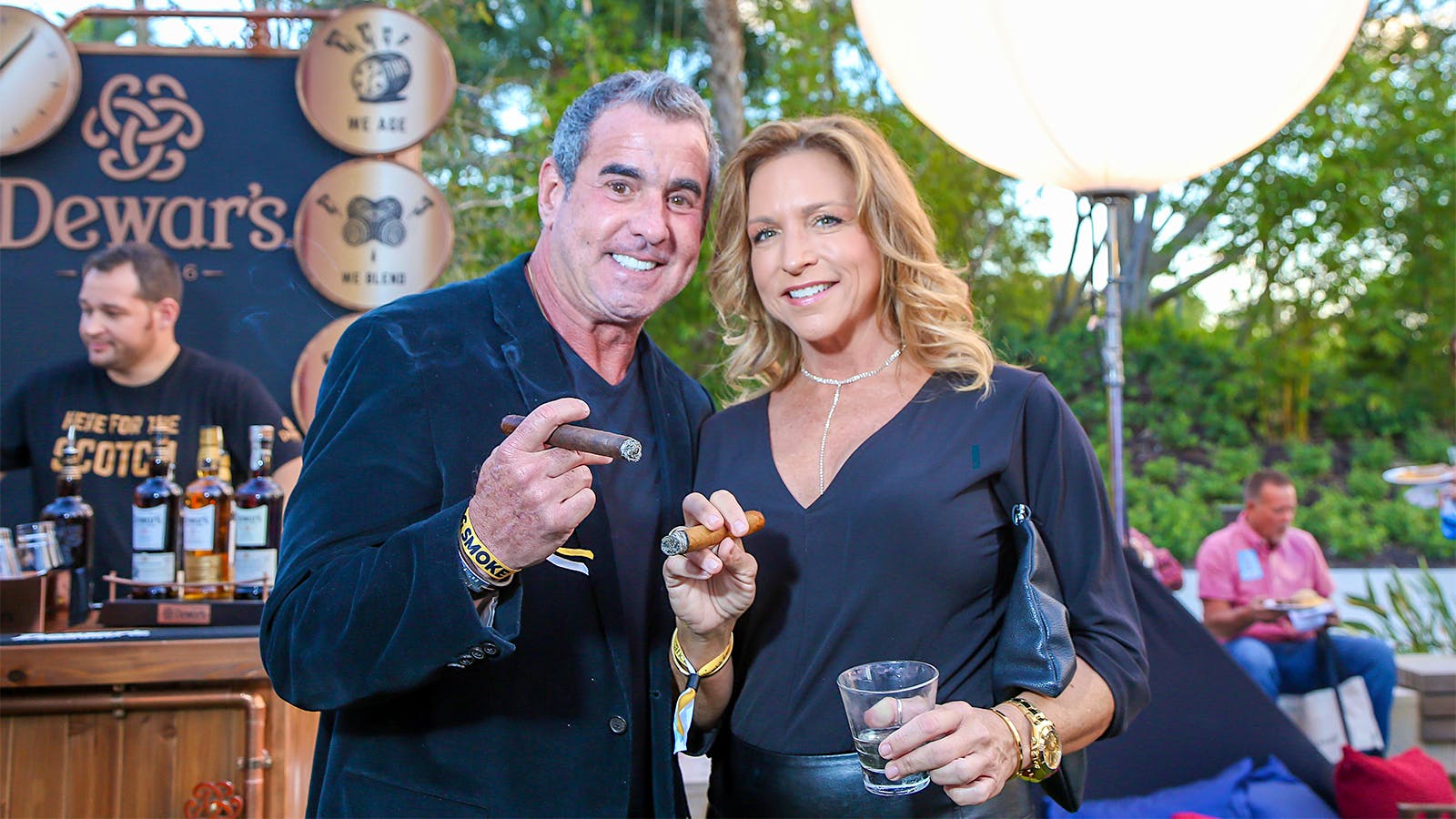 Shannon Quigley and Michael Marin enjoy a cigar with their drinks during the event. 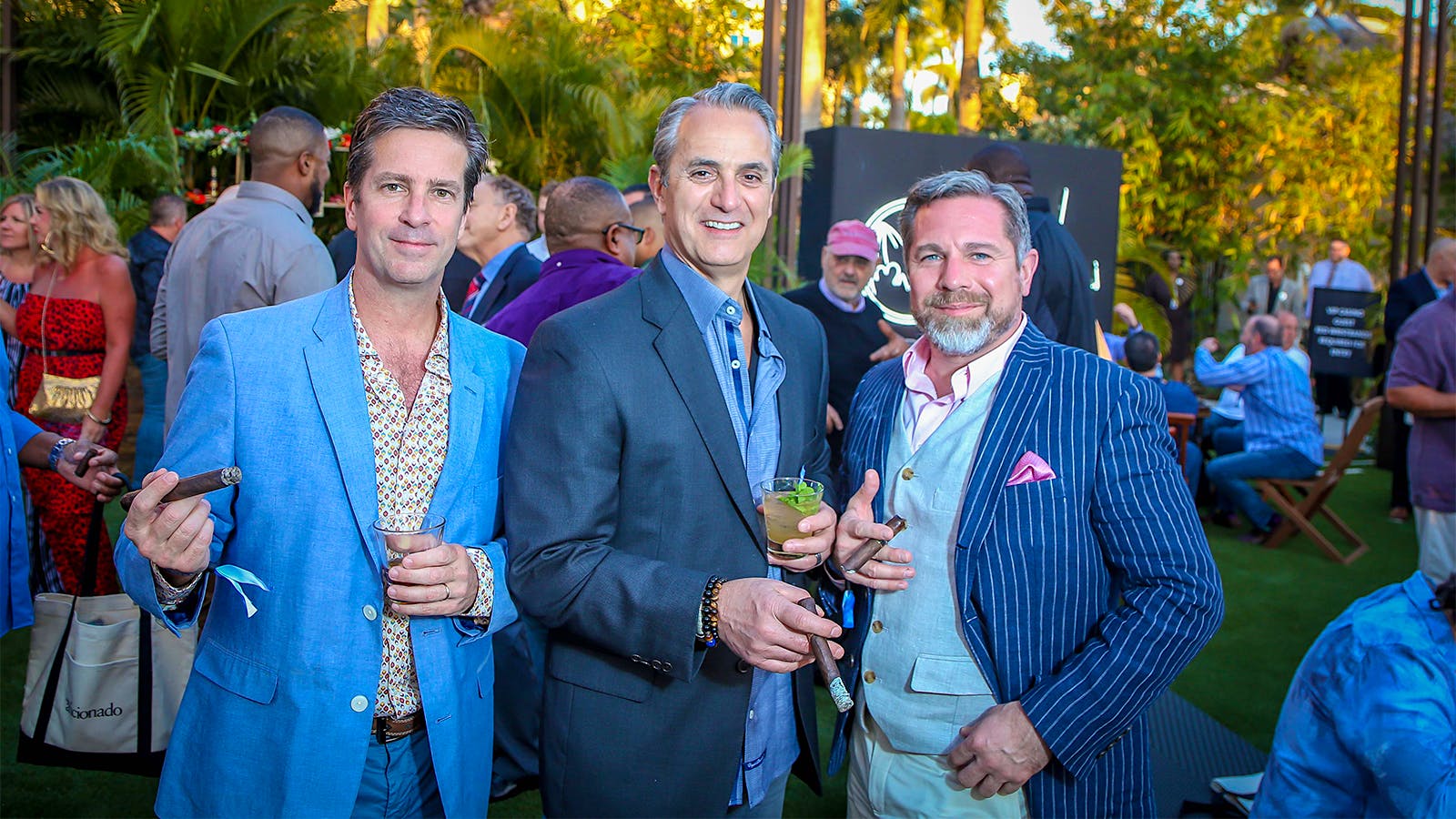 Every Cigar Aficionado Big Smoke has its own feel, vibe and personality, no matter the city. All, though, have one thing in common—a superlative selection of cigars and a festive environment where people are given the freedom to enjoy their smokes and also the rare opportunity to meet the cigarmakers who created them. The Seminole Hard Rock in Hollywood is the newest venue for the Big Smoke celebration. Here, everyone is free to smoke inside the Hard Rock’s ballroom or wander outdoors to the lush garden as the warm, Florida evening turned into night. 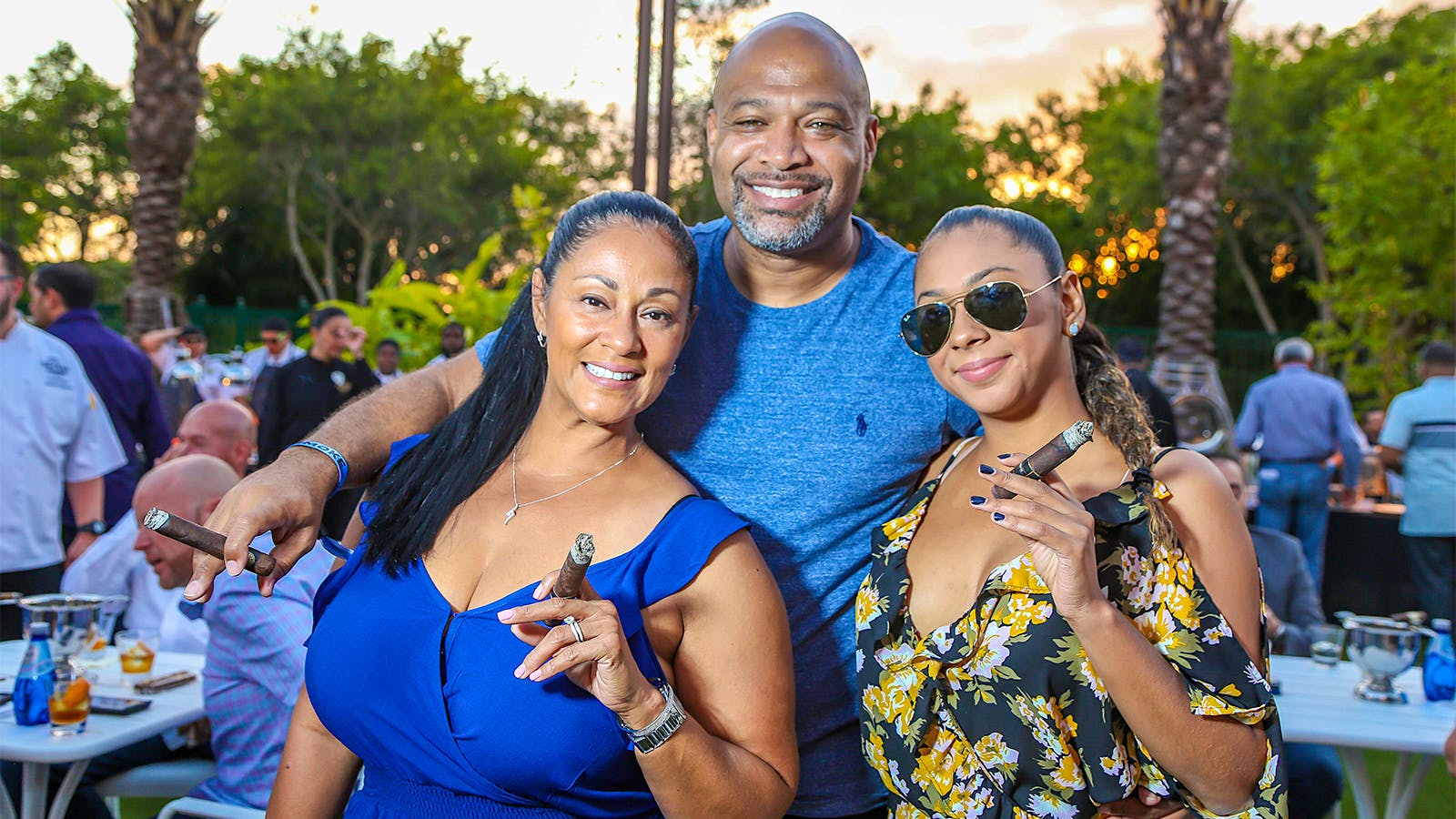 It's all smiles and smokes for Yvette Mathis, left, Bryan Mathis and Chelsea Melendez.

Ticketed guests first encountered the inside areas, which, for cigar fans, was more like a wonderland of cigar booths, cocktail bars and food stations. And in keeping with the Big Smoke theme, it’s one of those rare times when almost every maker of premium, handmade cigars is in the same room. You’re just as likely to run into cigar stars like Litto Gomez of La Flor Dominicana, Ernesto Perez-Carrillo of EPC Cigar Co. and Jorge Padrón of Padrón Cigars as you are to shake hands with Rocky Patel of Rocky Patel Premium Cigars, Alan Rubin of Alec Bradley or Pete Johnson of Tatuaje. 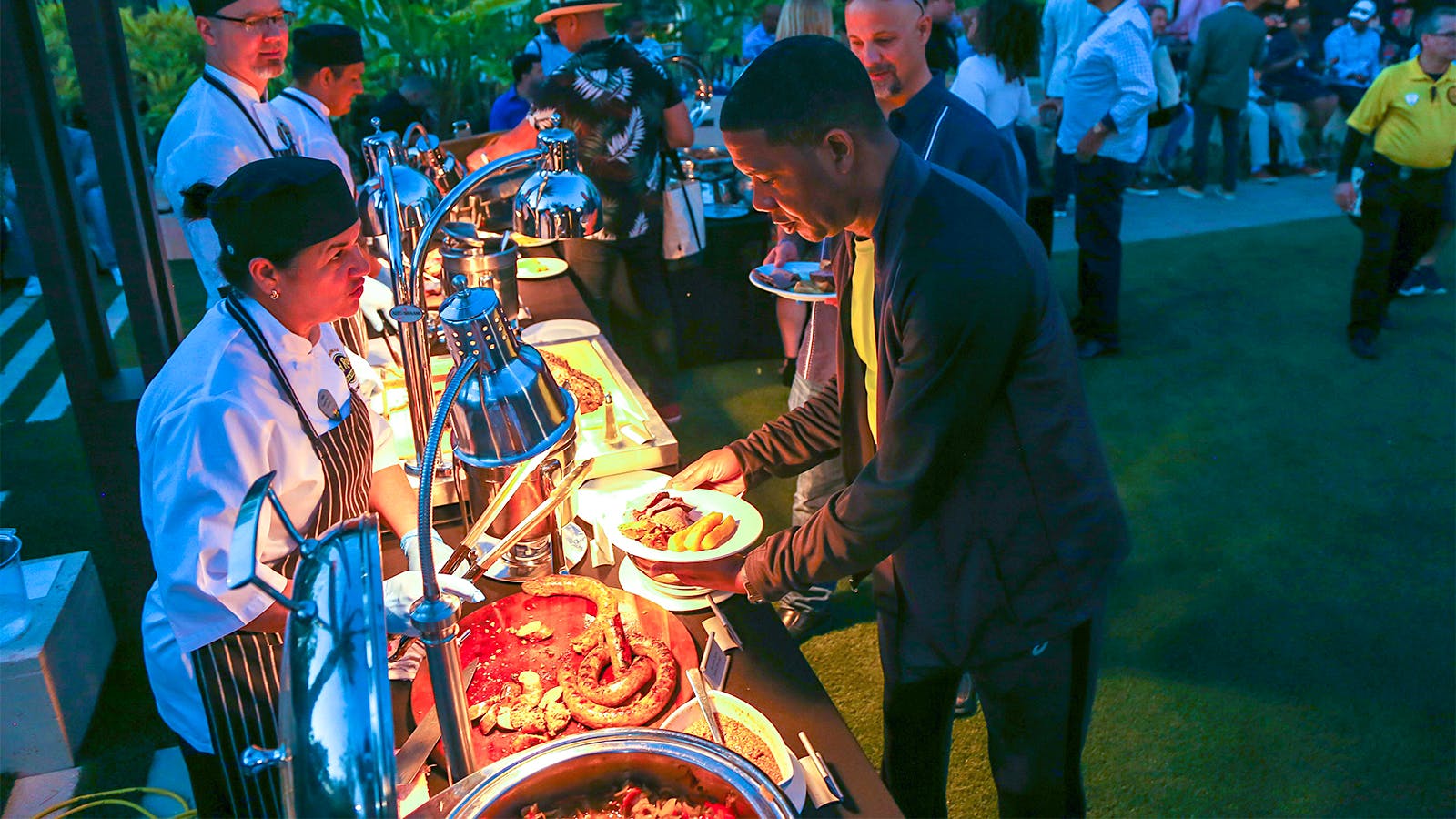 The food was as plentiful as the cigars and drinks, with sausages and flank steaks roasting on open-fire grills all night while servers at carving stations piled up as much beef as a plate could hold.

You might see Jaime or Pepín Garcia of My Father Cigars while getting a cocktail or Cynthia Fuente-Suarez and Liana Fuente behind the Fuente booth taking photos with their devoted fans. They were all there, as were industry heavyweights like Javier Estades of Tabacalera USA, the giant company responsible for the Montecristo and Romeo y Julieta brands, and Rick Rodriguez, brand ambassador for General Cigar’s CAO brand. 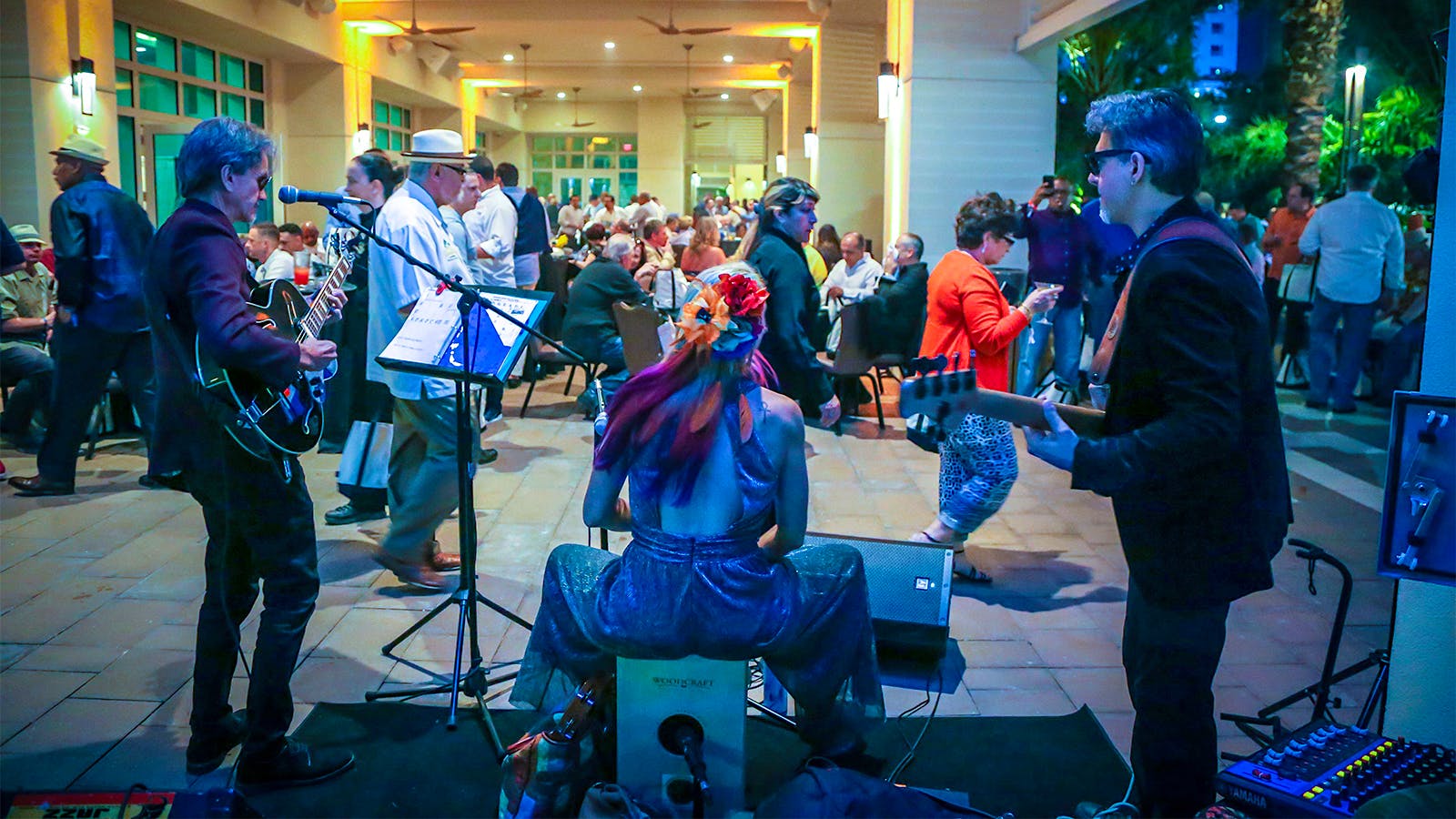 A live band entertained the crowd and kept the vibe upbeat and jovial.

Raphael Nodal was happy to talk about his Aging Room Nicaragua cigar and Nestor Andrés Plasencia, the tobacco grower to the stars, was there with his brother José Luis, handing out their own brand of smokes.

If this sounds like a giant cigar lounge where nearly every cigar star in the industry is present, that’s because this is exactly what it is. 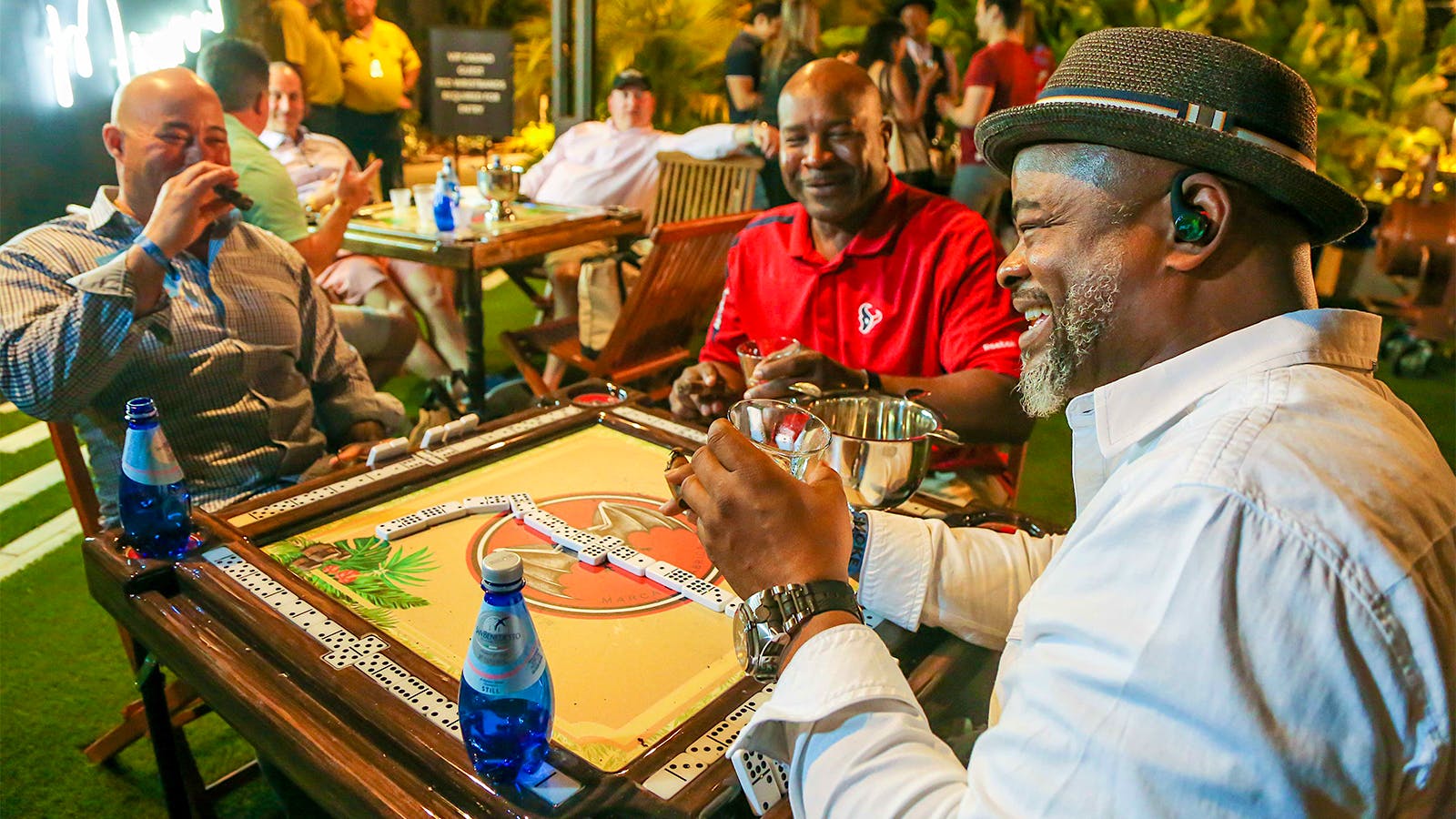 But unlike previous Big Smokes, the ballroom at the Hard Rock opens up to a beautiful, tropical themed outdoor garden with live entertainment, more cocktail bars and plenty of room to relax and enjoy a cigar.

José Timaros came from Santo Domingo, the capital city of the Dominican Republic, and flew in just for the show. Timaros brought eight of his friends and is a regular attendee of Big Smoke celebrations. He purchased regular tickets, which granted entry at 6:30 pm. 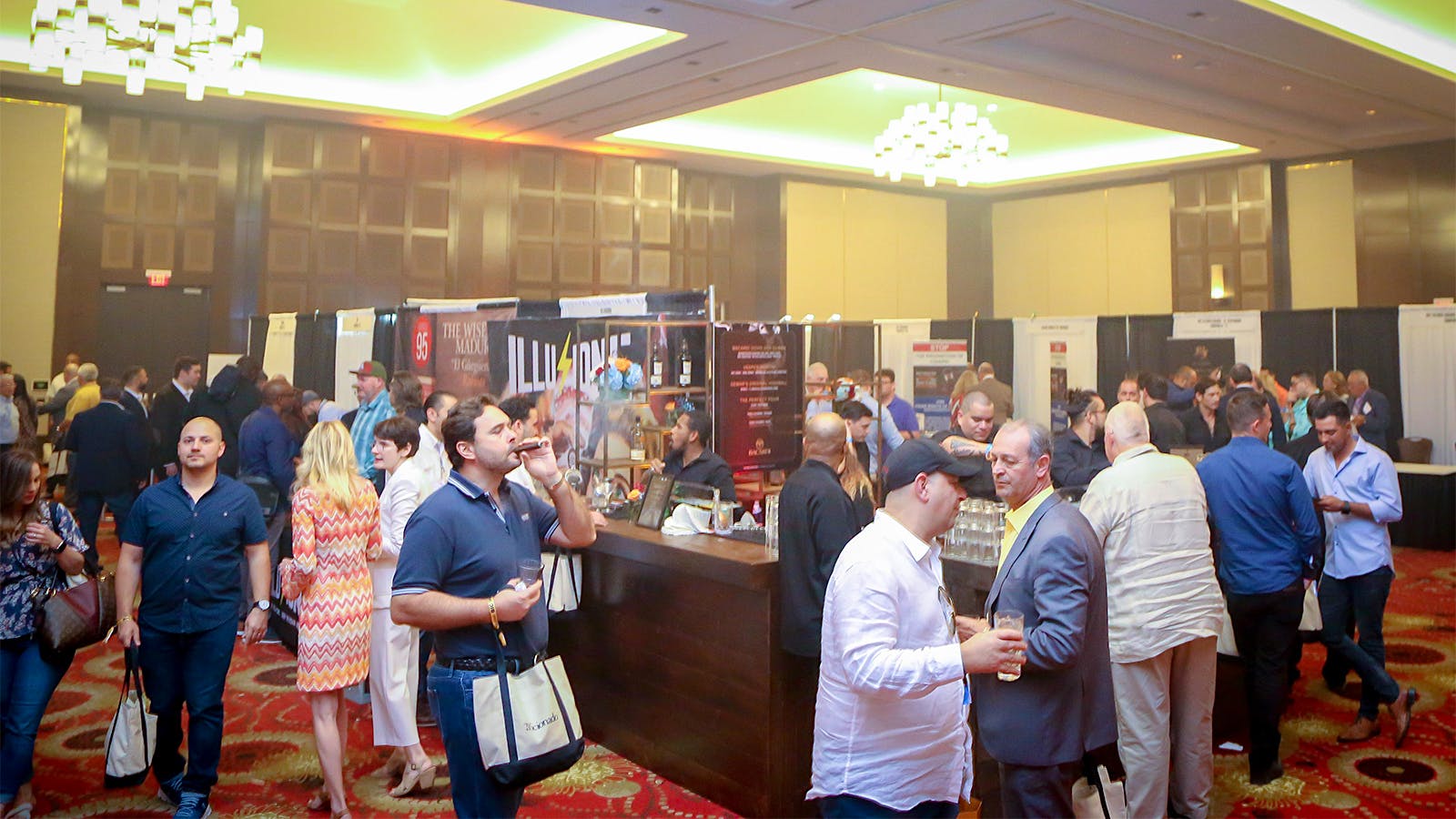 Big Smoke Florida guests smoke inside the hotel as they sample cocktails from one of the Bacardi bars.

“Next year, I’m going to get the V.I.P. tickets,” he said. Those will get him in an hour early before the crowds. “But I love the D’Ussé,” he adds, referring to the Cognac. “I had it here for the first time, and if not for the Big Smoke, I would have never heard of it.”

Bacardí brought mixology to the Big Smoke, offering two cocktail bars serving a variety of creative and classic drinks, including Vespers and Old Fashioneds and more. Dewar’s Scotch had its own pouring station, as did Hatuey Cuban-style beer. 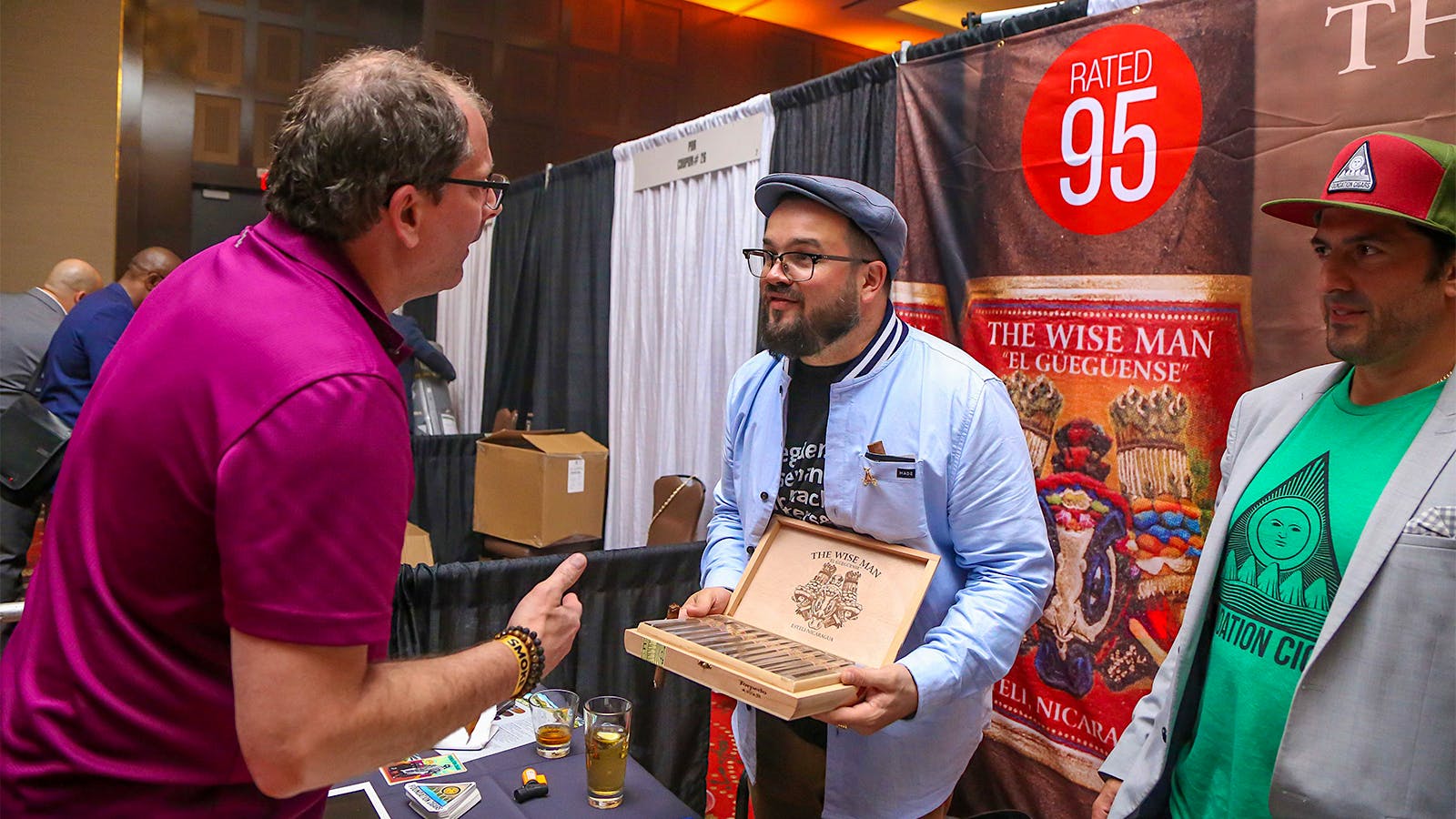 Foundation Cigars owner Nick Melillo talks with a guest at his booth.

Avid cigar smoker Steve Silvers of Tampa, Florida was on his way to a music festival in Miami, but figured he’d stop in at the Big Smoke on his way.

“It’s an amazing event,” he says. “I’ve been smoking for 30 years.” Silvers was puffing on a CAO Flathead 660, a large, box-pressed smoke given out by General Cigar.

To make sure that all the cigars stayed fresh, Boveda handed out large, humidified bags capable of holding every smoke of the evening.

Of course, the food was as plentiful as the cigars and drinks. Sausages and flank steaks were roasting on open-fire grills all night while servers at carving stations piled up as much beef as a plate could hold. Charcuterie, cheese and sliders were available, as well as an array of desserts and more.

The Seminole Hard Rock is located in Hollywood, Florida, roughly 20 minutes away from the Fort Lauderdale Airport and a half-hour from Miami International. The resort offers gambling with slot machines, table games and poker, fine and casual dining, a 4 1/2-acre, lagoon-style pool, spa and more. That evening, temperatures hovered in the high 70s.

Next to the Hard Rock is a curvy structure that looks like a giant guitar. You can’t miss it from the highway. At 450-feet tall, it’s the unforgettable centerpiece to the Hard Rock’s $1.5 billion expansion: a guitar-shaped hotel. The building isn’t quite finished, but when it is, this giant guitar in the sky will add hundreds of additional rooms to the property.

“It’s a beautiful event,” said Jorge Padrón, one of the rock stars of the evening. “I hope you do it here again.”

The next Big Smoke will be the Big Smoke Las Vegas weekend, which is scheduled to take place from November 15 to 17 at The Mirage Hotel & Casino. Tickets will go on sale soon.