Babe Ruth died 71 years ago, played his last game 84 years ago, and was born 124 years ago. Despite such irrefutable inactivity, “The Sultan of Swat” recently set another record. His New York Yankees road jersey, dated between 1928 and 1930, sold at auction for $5.64 million, the highest price ever for a memorabilia item. Alas, Babe Ruth is still the king.

The sale was conducted by Hunt Auctions at Yankee Stadium in June. The intact, light grey flannel shirt bears its original drawstrings at the back, all of its buttons, and the name “Ruth” stitched into the collar. “Yankees” is bannered across the chest.

“The only time anyone wore such a uniform was between 1928 and 1930,” explained David Hunt, president of Hunt Auctions. The auction house partnered with Ruth’s family and had access to “elite third-party collections.”

“We’ve known of the uniform’s existence for some time,” Hunt said. “Babe’s collection has remained largely unknown to the general public, and we thought it was time to bring these amazing pieces of his life to light,” said Linda Ruth Tosetti, Ruth’s granddaughter, in a news release. The seller and buyer chose to remain anonymous.

The jersey itself is pristine, if unadorned. “There’s never been a time before or after when they had that iconic nickname ‘Yankees’ on the jersey,” Hunt continues. “It was also in their monster wheelhouse days of the [world championship] 1927 and 1928 teams. There is no doubt that Ruth is the driving factor behind it, but if you were going to want a Ruth jersey that is one of the top jerseys, this is the one you would want.”

The previous record sale was also for a Ruth road jersey; a 1920 item with “New York” across the chest that sold for $4.4 million in May 2012. Prior to that sale, the record for any piece of sports memorabilia was the 1909 T-206 Honus Wagner baseball card, which sold in October 2016 for $3.12 million. In sum, Ruth’s road jersey sold for $2.52 million more—nearly double—the next most expensive item. 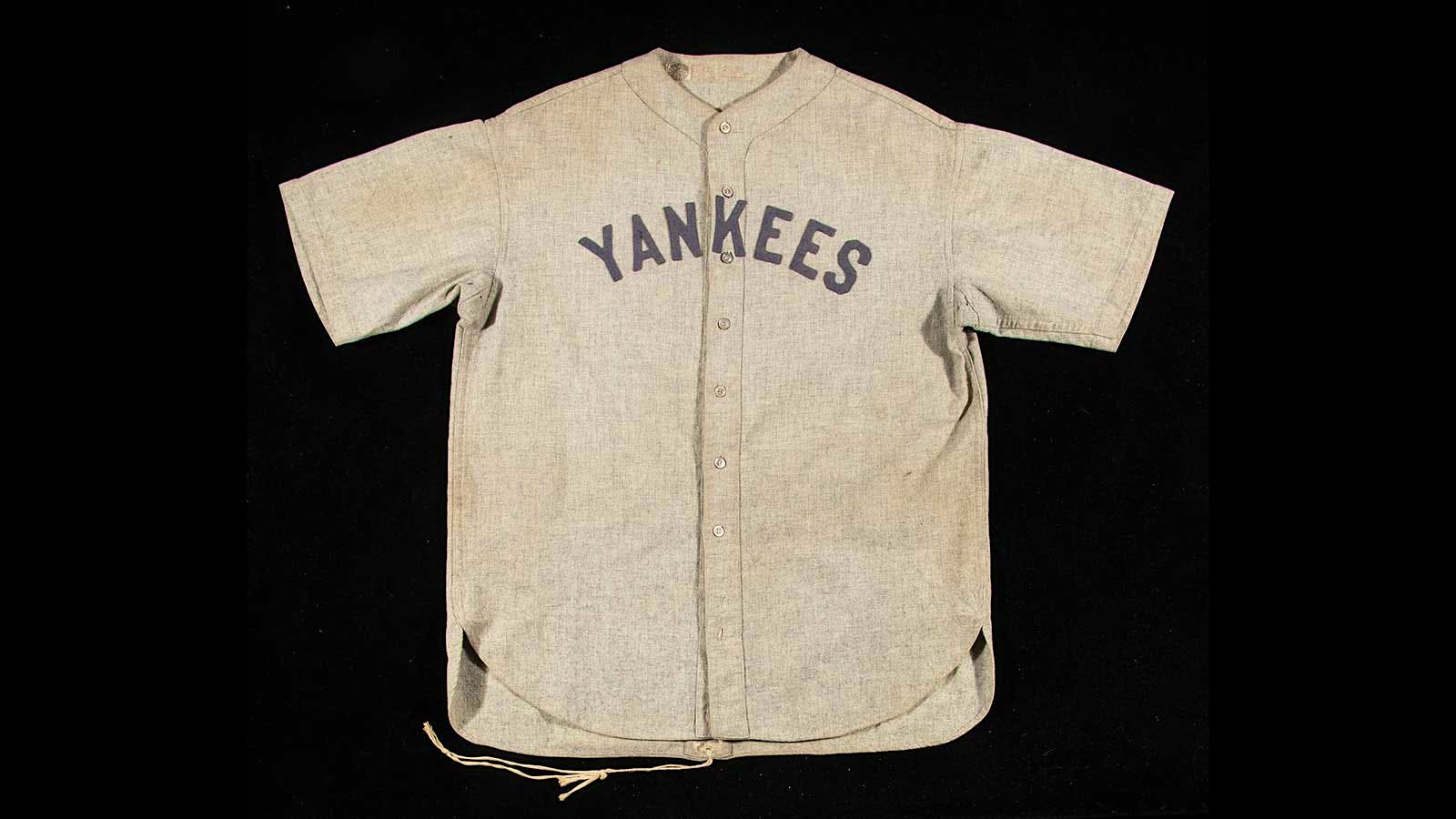 The intact, light grey flannel shirt bears its original drawstrings at the back, all of its buttons, and the name “Ruth” stitched into the collar. “Yankees” is bannered across the chest.

The story possesses a fitting symmetry. The successive record-breaking prices for Ruth memorabilia mirrors his repeated shattering of records—his own records. He was the first to hit 30 home runs in a year, the first to hit 40, then 50, and finally 60 in 1927. Those marks came after he won 20 games in a season twice and hurled a record 29 and 2/3 consecutive scoreless innings in World Series play for Boston, helping them to three world championships in four years.

Ruth plied his trade amid a sea of sporting personalities competing for newspaper column inches in the 1920s. The notables included lithe Bill Tilden in tennis and Bobby Jones in golf, football’s “galloping ghost” Red Grange and boxing’s Jack Dempsey, the “Manassa Mauler.” Yet Ruth outdistanced them all. In the Roaring Twenties he roared the loudest, belting 467 home runs.

But how does Ruth draw such a high value? “It’s a phenomenal question for which there is no scientific answer,” Hunt opines. “One thinks first about the athlete on the field causing fans to throng to the stadium. You have to think that he came at the right time—in that Roaring Twenties era where baseball was the most popular sport. Not just here but in the world. During the Great Depression Ruth was a figure that people could turn their attention to. And then all the different marketing pieces: appearing in movies, on Broadway, on the Vaudeville circuit. In the midst, he never forgot who he was. He would famously stop the car on the side of the road and be pictured in the throng of 300 kids.”

The Ruth legend also owes to his degree of dominance. Two examples: when Ruth hit 54 home runs in 1920, the runner-up George Sisler hit 19. The following year he led by 35 again, hitting 59 home runs to Ken Williams’ 24. No professional team athlete ever outdistanced the field to such a preternatural degree. The Bambino’s inhuman achievements, coupled with an outsized lifestyle of eating, drinking and carousing, fueled a mythic reputation. He was baseball’s Zeus and anything his life touched was heightened in importance. Like cigars.

Ruth became synonymous with cigars from the time he was depicted as a young man rolling torpedoes at a work bench. Then there was a Boston firm that Ruth had invested in that produced a Babe Ruth nickel cigar, complete with his picture on every wrapper.

His Yankee roommate, and future Hall of Fame pitcher, Waite Hoyt marveled, recalling how Ruth lit up “a long 60-cent cigar” in his hotel suite. Later, he and his second wife, Claire, gave a dual endorsement to White Owls, which the Bambino touted as a “mild cigar” which his wife favored because “they’re kind to kisses.”

“He was a generational player,” Hunt concludes. But that description doesn’t quite do him justice. Ty Cobb and Honus Wagner, Ted Williams and Joe DiMaggio, Stan Musial, Willie Mays and Hank Aaron—these immortals are all generational players by definition, since they each dominated the game for the roughly two decades they played. By that measure Ruth is intergenerational. He dominates all time. He remains the “Colossus of Clout,” “The Wali of Wham,” and the “Maharaj of Mash,” the very tags applied to him by newspaper scribes of the 1920s trying to outdo each other with their baroque flourishes.

How fitting that the greatest player ever should have the highest priced uniform.

Ken Shouler is a frequent contributor to Cigar Aficionado.