Josh Melville doesn’t want you to compare his new cigar lounge, Ash, to other cigar lounges. In fact, Melville really considers Ash something else entirely, a “professional business incubator” that also includes a premium cigar lounge.

“The comparison is really to shared work spaces,” Melville says, explaining that companies like WeWork, Regus and other smaller outfits rent out shared office space, but “none of them lets you smoke.” Melville is confident Ash is filling a need, one that has grown since the pandemic realigned the need (or desire) for permanent office space. 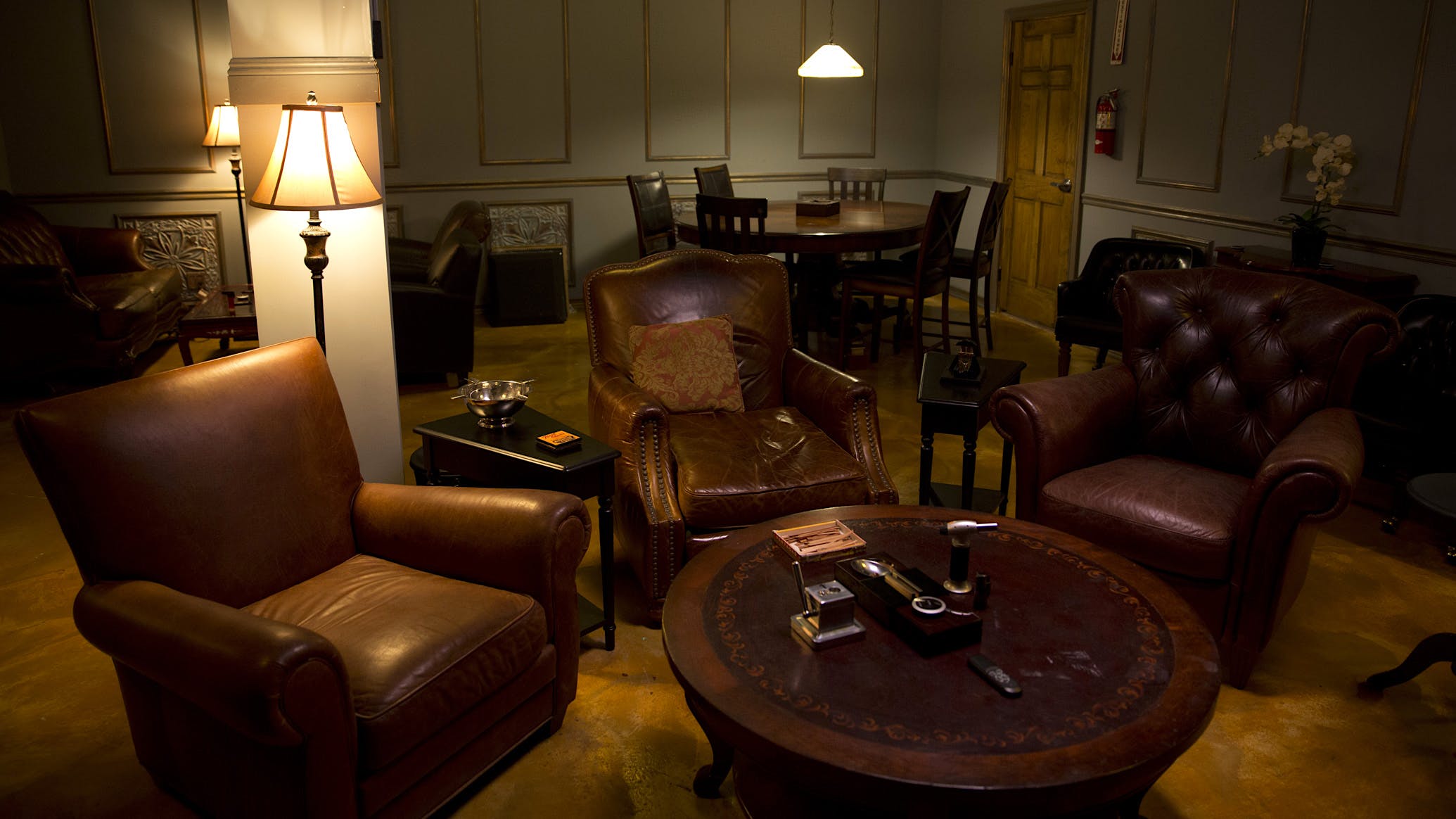 The Illuminati Lounge is a private room in Ash that features leather seating, dark accents, a TV and even a round table for discussion.

“This is work space 2.0 with cigars as a bonding element,” he says, explaining how Ash is aimed at attracting creative millennials. “Most artists smoke something during the creative process,” he says. The 2,000-square foot lounge exhibits a lot of creativity, beginning with the logo. If you look closely at the orange “H” (it can take awhile) you should see a short, stubby cigar. Frescoes harkening to the cigar culture of Cuba and Key West adorn the two long side walls in the larger room known as the “Commons.” Shelves holding old cigar boxes are cut into the walls. Everything about the design, done by Melville, is meant to evoke some idea of Havana. The textured tile ceilings, the faux paint on the walls.

Ash is located in Los Angeles, in the East Hollywood neighborhood called Thai Town. The area, to put it mildly, is evolving. There’s very good, free covered parking nearby and a lot of great restaurants. But, as in many parts of L.A., there are homeless folks. 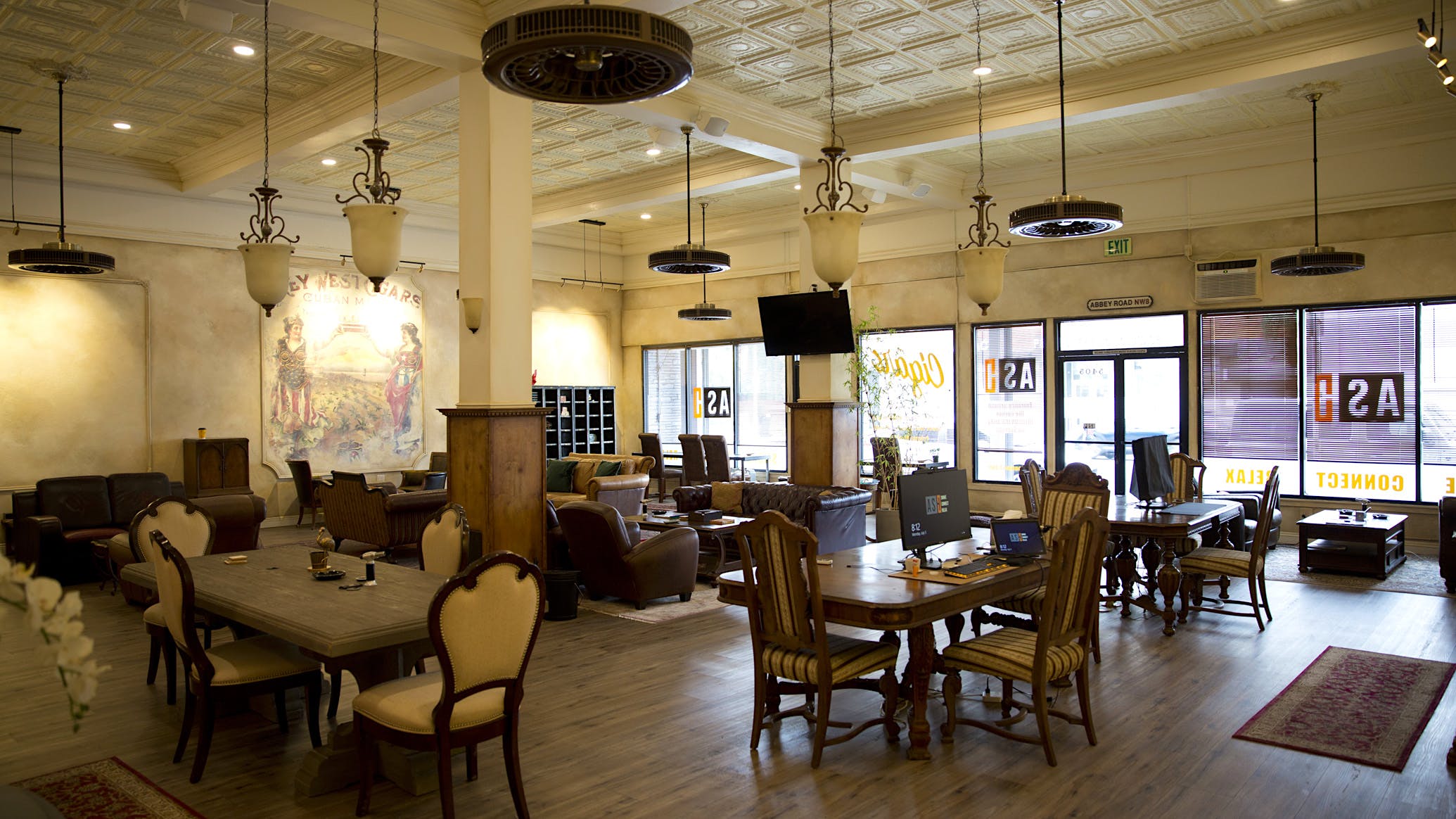 A sprawling floor plan makes room for everything from long tables for collaboration and work stations to chess boards and TVs.

After you enter Ash, there’s a hermetically-sealed closet to keep the aroma of cigars off bags and coats, something Melville said is an effort to attract women to the lounge after research showed that the lingering smell of smoke could keep them away. That’s also the motivation for having a ventilation system—two large air handlers called “Fred and Ethel”—that exchange the air in the lounges 12 times an hour aided by modified ceiling fans that pull up and filter smoke. That makes for an almost smoke-free environment.

The second lounge, the “Illuminati” room, is smaller and designed for business or social gatherings. The floor is “marbleized” and the overstuffed chairs are quite inviting. There’s an 85-inch screen for business presentations or watching movies.

Melville designed the Commons to accommodate visitors who want to create at several of the work station tables on the perimeter, or those who want to hang out at a bistro table or pod of comfortable couches and chairs, what Melville calls “conversation pits.” The pits succeed, without walls or dividers, in providing a sense of privacy. The couches face each other with a coffee table in between. Chairs can be pulled up to the sides. Two TVs show the games. A service button is on each table. Push it and someone will show up “in eight seconds,” Melville claims, to attend to your request for coffee (there’s an upcharge for espresso), some lapsang souchong tea or another cigar. 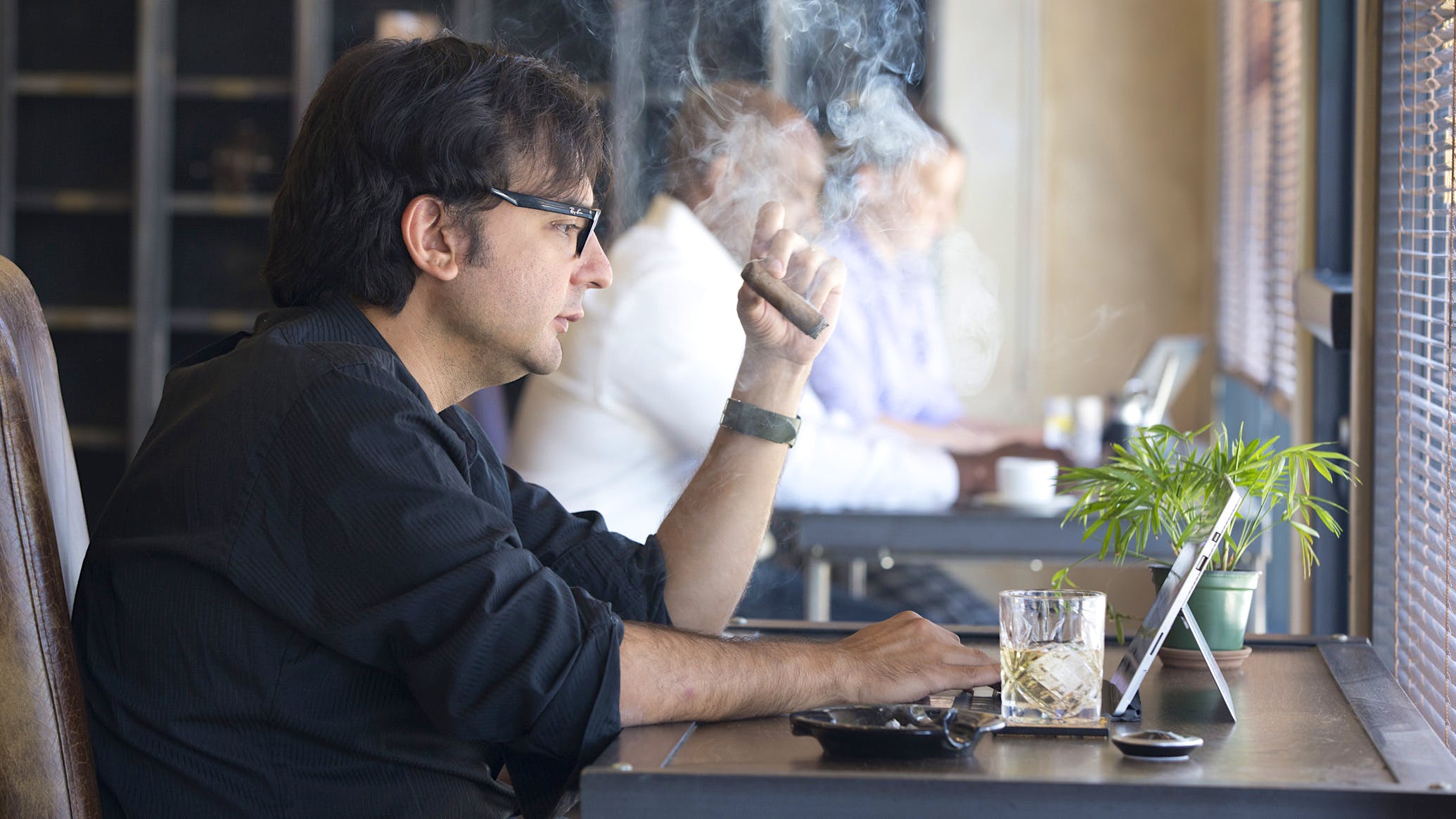 Aficionados who appreciate a good smoke while they work will love the work stations at Ash.

Ash is happy to have you bring in your own cigars, but also offers some that are harder to find and a variety that fits most taste levels, including a house cigar called “Don’t Ask,” as in don’t ask where it’s from, don’t ask about the blend. The claim is they taste like “farm rolled cigars from a certain island.” That island is not Cuba. The blend is pleasant, medium to medium-full, not overly challenging, slightly floral with a bit of complexity. It’s available in a robusto ($18) and torpedo ($22), and it’s a good midday cigar for most aficionados.

Ash does not have a walk-in humidor. The cigars are displayed “like jewelry,” Melville says, in two glass cases, called “Desi” and “Lucy,” at the entrance, which is through an alley in the back of the building. They are ordered from milder to stronger, from premium to super-premium. The latter category includes Davidoff and Padrón Serie 1926 while the premiums include Arturo Fuentes, Henry Clay War Hawks, My Father El Centurions, NUB, Charter Oaks, Oliva Serie Vs and Romeo y Julietas. Prices range from about $14 to $35 per stick. You can light your cigar with a torch or a cedar spill found on the coffee tables around the lounge.

If you go there to work, Ash’s WiFi is about as powerful and secure as you can find in a public space, boasting a 940 Mbps network and an internal VLAN (virtual local area network), along with networked printers and, for certain memberships, high-resolution work stations. About those memberships, keep in mind that the concept here is not your traditional cigar lounge. 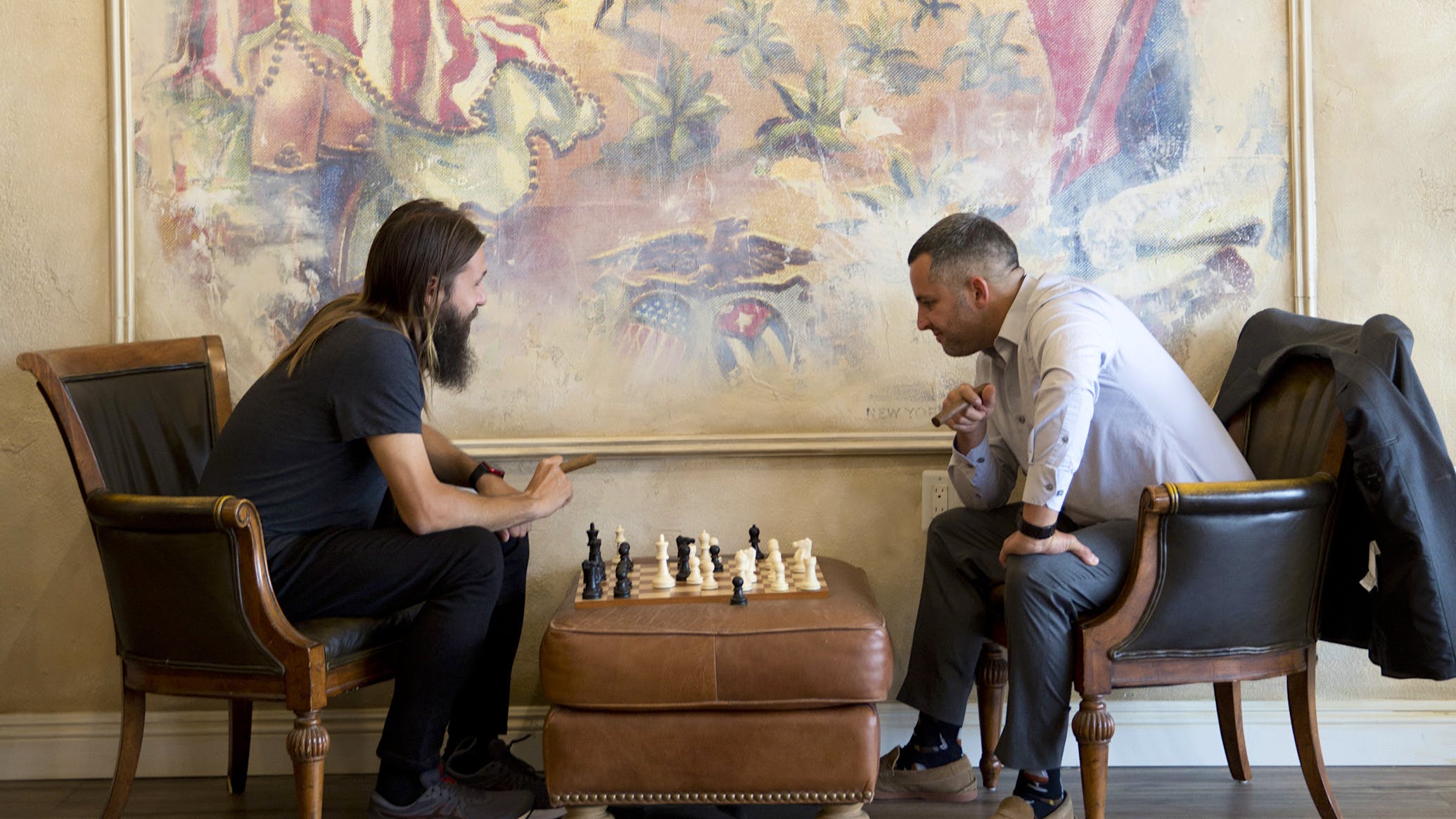 Guests at Ash Cigar Lounge have a showdown of the minds at the chess table—while indulging in a premium smoke.

If you are visiting Ash for the day, pay $25 for the “Day Tripper” level. The fee can be applied to merchandise, including cigars, and you can use the Internet and enjoy a chair all day. For $85, you get five visits per month with one guest pass per visit and a $20 monthly store credit. At $190 a month, you have daily access and two guest passes per visit, plus a humidified locker. All the membership levels above $85 come with a locker to store cigars.

“Our locker bay is retrofitted from a 1920 Portland Oregon hardware store storage armoire,” Melville says. The lockers come in “standard” (room for up to 25 cigars) and “jumbo” (holds about three boxes), which are individually humidified with Boveda packets. Humidity levels can be monitored via WiFi.

Access to the Illuminati Lounge costs $450 per month and that comes with a 15 percent discount on all merchandise, a $105 monthly store credit and five guest passes per visit. If you use Ash as your work space, that’s pretty reasonable rent.

Ash is a good example of the evolution of the cigar lounge, and it might be way ahead of others in adapting to business realities. Time will tell. Some lounges around L.A. have taken to limiting how long you can visit. Many require the purchase of cigars to be smoked on the premises. Some have minimum-purchase levels. In many ways, what Ash is doing is a bit clearer. Pay the daily fee, or go monthly. Smoke whatever cigar you want. Then spread out at a conference table to create and develop that next-level idea.

Hours:
Tuesday through Thursday: 10am to 8pm
Friday: 10am to 9pm
Saturday/Sunday: 1pm to 9pm
Closed Monday (except by appointment)