Share
Michael Sullivan's waterside patio in Port Charlotte, Florida took home the number one prize in the #MyCigarSpace Contest based on reader votes.

Cigar Aficionado's #MyCigarSpace Contest revealed an impressive array of great places to smoke cigars, from carefully manicured lounges inside the house or loosely configured chairs in the backyard, to scenic spots around the neighborhood that offer a comfortable place to sit. After hundreds of submissions online, the editors of Cigar Aficionado selected five finalists, and you readers voted for the winner. These finalists had quite a bit of range, too, from a secluded patio to a James Bond-like cigar lounge that took years to make.

Michael Sullivan is originally from the Dayton, Ohio area, but he currently resides in Port Charlotte, Florida. His eye-catching waterside patio certainly appealed to our readers, and it took 38.1 percent of your votes, earning him the top spot in our contest and two tickets to the inaugural Big Smoke Meets WhiskyFest in Hollywood, Florida.

Sullivan likes to go down to his dockside patio two or three times a week to get away from the house and smoke his Olivas and Padróns or try out some new cigars. Here, the smoke doesn’t bother his wife, and he can relax with a Bourbon. While in his personal cigar space, he stays in touch via Facetime with his buddies.

The nature also offers its own free entertainment. From his patio, Mike can watch a variety of birds take flight and take in the wildlife. Occasionally, he’ll also take his boat out for a ride on the Dorchester Waterway, which flows past his dock to meet the Morningstar Waterway, where the confluence creates a small lake for drifting and hanging out. 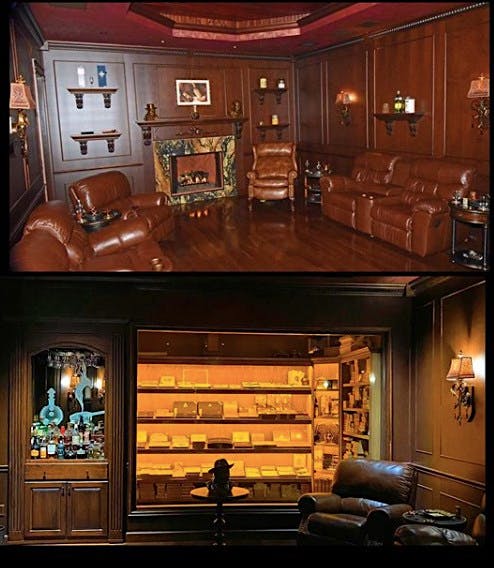 When Emil Dameff finished his medical training at the University of Miami (The U) he wasn’t a fan of cigars. That all changed when he watched “Seinfeld,” and became intrigued by the character Kramer’s obsession with Cuban cigars. He puffed his first Cuban cigar on a cruise, and quickly became enamored with cigar smoking and started amassing a collection that includes Arturo Fuentes and Padróns, along with vintage boxes of Montecristo and Cohibas.

Dameff knew he wanted to one day have a cigar space of his own and began compiling notes and research over five years. When his mother-in-law was diagnosed with Alzheimer’s, he had a guest house built for her, along with a cigar room for himself in his home in Punta Gorda, Florida. The cigar room took two years to construct and was finished in 2011. Since then, Emil regularly uses his space two to three times a week and often entertains friends there with his collection of smokes and fine spirits. A medical man to the bone, he has conducted several small studies monitoring how the blood pressure and pulse of his friends goes down after a stressful day of work and lighting up a cigar. His favorite thrill of going into his space is the 10-20 minutes he spends going through his collection before deciding what to smoke. 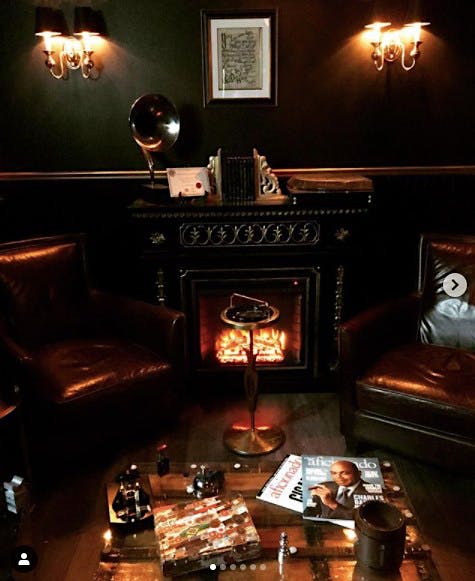 Nothing is more archetypal to the image of a cigar lounge than a couple of easy chairs, a glass of Scotch and a roaring fire. All of this can be found at the Hardisty Room, located in the home of Anthony Mazzotta of Edmonton, Alberta, Canada. The Hardisty Room is a labor of love between Mazzotta and his wife, Stefania, who helped Anthony design and build the room. Inspired by their mutual love for the aesthetic of the Roaring Twenties and cigars, this room is complete with a stocked bar wall humidor. When looking around the room, you can almost imagine Al Capone or Marlene Dietrich making an appearance.

Not only is a proper lounge a cornerstone for a good smoke, but it is also a cornerstone in the Mazzotta marriage – one of their very first dates took place at the Carnegie Club in Manhattan. When they went house hunting, one of their essential requirements was a space they could convert into a cigar lounge. Anthony, whose favorite cigar is the Arturo Fuente Eye of the Shark (Stefania’s is the Oliva Serie V Melanio Torpedo), uses his lounge three to four times a week whether it is to entertain friends, spend time with his wife, read a good book or sip whiskey while smoking. 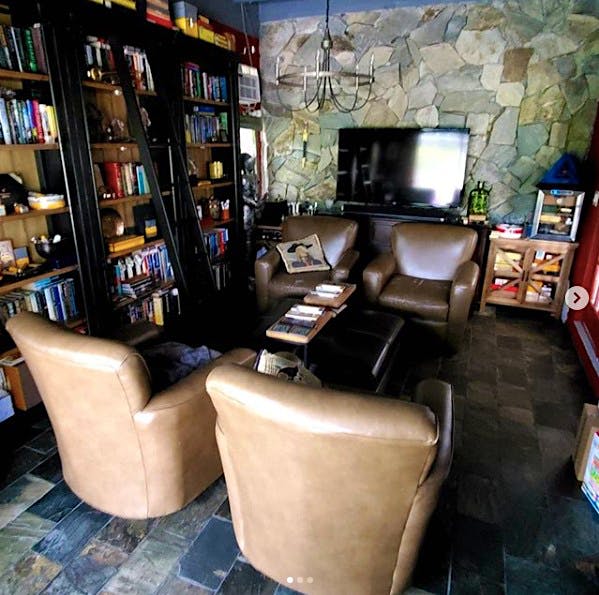 Eddie Ramirez hails from San Juan, Puerto Rico, but he relocated to Delray Beach, Florida (sensing a trend here) 10 years ago to continue his medical practice. He converted a screening room in his home—located between the terrace and backyard—into this stone-faced, book-lined viewing room of a cigar lounge. His goal was to create a classic cigar space with slate floor, stone walls, beautiful mahogany bookcases from California and classic leather chairs. This is where Ramirez smokes his favorite cigars: Montecristo No. 2, Cohiba Robusto, Hoyo de Monterrey Epicure No. 1 and Arturo Fuente Hemingway.

In normal times, you could find football, golf and baseball on the centerstage flat-screen, but recently it’s been movies and TV series. Currently, Ramirez and his wife are binge-watching “The Sopranos,” a fitting show for a cigar lounge. In his bookcase, you might pull out novels by John Grisham, David Baldacci, Tom Clancy, Michael Connelly and others, as well as informatives about cigar history and other nifty handbooks. Unless Eddie is an incredibly fast reader, it sounds like enough material to make it through apocalyptic-like times. He’s also placed collectible humidors, ashtrays and lighters on the shelves to put the cherry on top of a great space.

***
Thanks to everyone who showed us their places of solitude, where one might enjoy a fine cigar and some peace of mind–especially in times like these. Keep on posting shots of your favorite cigar space on social media using the hashtag #MyCigarSpace. We love to see them.

For information on how you can attend Big Smoke Meets WhiskyFest, click here.