“I’m going to go with a Romeo y Julieta Wide Churchill today,” says Inna Tuler, carefully rolling the Cuban cigar between her fingers and getting ready to cut and light it. “I got it as a gift so I’m going to smoke it today.”

The California-based businesswoman expertly clips the cigar, and lights it with a torch, moving the flame slowly around the foot of the cigar. Sitting on the outdoor deck of her home in Beverly Hills, she begins to talk about the cigar and her choice of a drink.

“I’m going to have a Jack Daniels on the rocks,” she says. “If I’m alone, I usually just have wine. But I like a lot of Scotches and Bourbons.  I always try different ones with my cigars. This cigar is burning really well.”

After a few minutes of chitchat, Inna opines about the cigar. “It’s not too strong, actually a little mild and I’m enjoying it a lot,” she says, as the smoke curls up into the evening air.

Tuler and her husband, Abraham, arrived in the United States from Israel in 1991 with just $200. Before his death in September, 2011, they built Maintco, an all-purpose general contracting company, which builds, renovates, cleans and maintains commercial real estate in Southern California. The firm’s 800 or so clients include Taco Bell, Starbucks, 7-11 and Safeway. It generates between $50 and $60 million in annual revenues.

“We left Israel after the Gulf War in 1991. There were curfews, things were closed. It was very scary. You’d be in the middle of the street and the sirens would sound and missiles were flying around and you had to find cover,” she says. “My husband owned a restaurant at that point, very successful, and it had to close.

“We decided we wanted to move to the United States,” she says. “We didn’t want our kids growing up in that kind of environment.”

Tuler says they packed up their belongings in four suitcases and flew to New Jersey where they had friends, arriving in March 1991. “We had nothing left after the war,” she says.

“It was the shock of my life, snow, cold,” Tuler says, “We didn’t have enough jackets for the kids . . . I said, we can’t do this, we are used to T-shirts and flip-flops.” After two weeks, they packed up again and headed to Los Angeles where her husband’s former partner in a road construction business lived.

The transition wasn’t easy. Neither she nor her husband spoke fluent English, they had no car and initially no place to live. But their connection helped Abraham find work on an avocado ranch, doing heavy construction jobs. He also took odd jobs. From the little bit of money they both earned, they rented an apartment in a big 200-unit apartment complex. The manager said someone had quit and offered Inna a job as an assistant manager. She had been walking up and down Ventura Boulevard looking for help wanted signs and decided the apartment job was an opportunity.

“Trust me, I didn’t have a clue about what I was doing,” Tuler says. But she rented apartments and handled problems with existing tenants and impressed the manager. She spent four years at the company, moving nine times with the family to new apartment buildings. “Every time they had a different struggling building that needed help to rent apartments or whatever, they would move me there, I’d do my job and they would move me to the next one,” she says.

But it still wasn’t enough. She took on two piano students, capitalizing on her training as a concert pianist, which she had given up in her early 20s because “I realized I wasn’t going to be the next Arthur Rubenstein.” After one session, the students’ father asked her why she shouldered two jobs while her husband wasn’t working. He offered to help her get a loan for $2,000 to buy a rug shampoo machine which might help in her apartment management job, but only if she could guarantee there would be work. She asked her apartment company boss, who said there would be plenty of work cleaning carpets when apartments turned over. 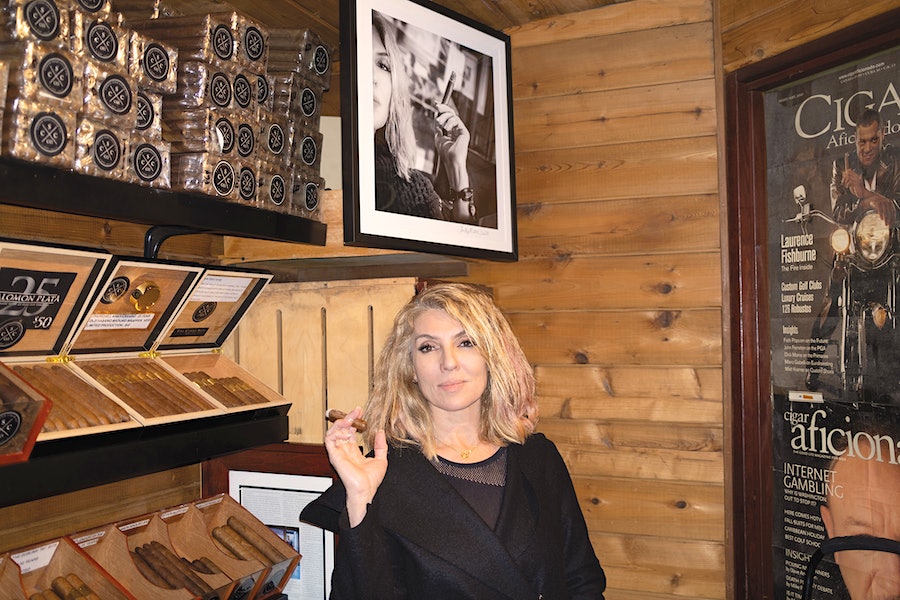 Tuler surveys the humidor at the Cuban Seed lounge on L.A.'s Sunset Boulevard where first become introduced to cigars in earnest.

“That’s how our company got started,” Tuler says. The rug cleaning jobs led to painting jobs and then to repairs in the apartment complexes that she was managing. She says her husband ended up hiring people because “he was really not a worker type. He was a manager and an entrepreneur and after a couple of shampoo jobs, he said, ‘I can’t do this.’ ” He made a deal with his first hires, keeping 30 percent of each shampooing job. And as the other types of jobs for painting and repairs came up, he did the same thing, hiring people to complete the work.

But the company’s progress was not a straight line to success. Tuler left her position at the apartment management job because she had tired of the constant requests to move. But there wasn’t enough money coming in to support the family, so she went to work in the finance department of a home mortgage company, underwriting HUD loans. “I said, one of us is going to go get a real job. I was born in [Ukraine] and I need to feel secure. I need a paycheck,” Tuler says. “But one day, Maintco got a phone call from 7-11. The representative said the company wanted a different supplier for their stores in the San Fernando Valley.” That account opened up a new world of big commercial real estate jobs, and after four months, Tuler went back full-time to Maintco.

“April 1, 2000, I went straight into the field, and we grew the account, we went from cleaning up a little graffiti here to fixing a piece of tile there to doing full remodels of the 7-11 stores,” she says. “I got our guys trained in installing roofs, fixing safes, food and beverage equipment. We had 60 stores as our client base, and now we have close to 800 stores in the area.”

While 2020 was hard on her and the business (she lost a good male friend to a non-Covid illness that year), the company is still growing and helping its clients adjust to the state’s sanitary requirements for operations during the Covid pandemic. “We are an essential business, so we stayed open at all times. There were some limitations with all the PPE, and some business was put on hold because customers didn’t want any exposure,” she says. She adds that she kept all her employees thanks to the government’s small business loan. “It hasn’t been easy, but we have survived.”

Tuler says she and her husband worked together well for over 10 years, but when he died in 2011 she assumed direction over all the operations of the company. Now, a son-in-law is involved in the management of the business, which has 40 employees. While she continues to work every day, she hopes her son-in-law will continue to take over more and more of the responsibilities so she can begin to enjoy life more.

Tuler wants to get back to some of her hobbies, including more time at the piano. She trained first in her native Ukraine starting at the age of four, and then, until she was 21, while living in Israel. She even had a music school with nearly 100 students in Israel before the Gulf War. “I want to spend more time to read my music,” she says, explaining that she doesn’t actually play piano much anymore, but that she can read a piece of sheet music and “hear” the notes in her head. ‘But I would like to start playing more again too.”

Cigars fall into the category of a new hobby. She had smoked cigars on and off since the late 1980s, but she describes getting immersed in 2018 through a friend, Andy Marx, a relative of Groucho Marx. “The first cigar lounge I tried in Los Angeles was called the Cuban Seed on Sunset Boulevard. They have a great lounge,” she says. “Then I got my membership at the Grand Havana Room and the Beverly Hills Cigar Club.

“Every time there’s a new cigar, I love it. I just want to try it,” she says. “The different aromas. It’s always good for any occasion. I enjoy the look of it, the smell of it. It’s like an event for me. It’s fun to do.”

She has several cigars that she favors from the Cuban Seed shop, a Churchill that she describes as filled with coffee and cocoa notes, a smaller one called an Exquisito, with some cocoa notes but also “something floral.” She likes the Montecristo Open series from Cuba, and recently was given a Hoyo de Monterrey Le Hoyo de San Juan, also from Cuba. “It was a nice light cigar that I enjoyed at the club one afternoon.” She says she prefers natural wrapper cigars but doesn’t have a preferred size, usually deciding what she’s going to smoke based on the company and the occasion. She recently acquired a new Daniel Marshall humidor to add to her several others and she is starting to build a collection, with up to about 100 cigars in total. “I’m keeping most of them in my wine cellar in Palm Desert,” she says.

Tuler truly enjoys her times at Grand Havana, the private cigar club in Beverly Hills, and was saddened when it temporarily closed due to Covid. “When it was open, I was going there at least once a week. Great food. Great people. Great conversation. It is one of the highlights of my week. It is a great place.” You’re likely to see her there at the start of the weekend. “I had Friday lunch there every week, with a girlfriend, or a business meeting with clients over lunch or dinner. With great wine, and even outdoors with the street noise, political rallies, loud cars, cold wind, didn’t matter.”

Tuler says she is one of the few women members of the club and is looking forward to not only getting back to her regular visits, but making it to the New York location once it reopens. “The people in the club are extremely friendly,” she observes. “It’s an educated, wealthy crowd that is very welcoming into conversations at their table and shares fun cigars over a debate. I always feel comfortable, welcomed and admired.”