Share
ABAM produces around 3 million cigars a year, with about 200,000 being the Villiger Flor de Ynclan.

Admit it—when you think of cigars and the Dominican Republic, the city of Santo Domingo never enters your mind. Seeing how most of the Dominican cigar industry is in Santiago, I never gave it much thought myself until yesterday when I visited ABAM, the factory that produces some of Villiger’s premium cigars, most notably La Flor de Ynclan. The Robusto size was awarded Cigar Aficionado’s No. 10 cigar of 2017. Since the accolade, ABAM has received a bit of recognition, but for years, it seems to have flown under the radar.

I thought it was time for a visit.

I had never set foot in ABAM before, but owner José Matias Maragoto told me that there is a new energy and enthusiasm in the factory. Since the rating, he’s had to put more rollers on Flor de Ynlcan, secure the tobaccos needed to maintain the brand’s consistency and more carefully manage workflow.

Right now, ABAM produces around 3 million cigars a year, with about 200,000 being the Villiger Flor de Ynclan. Before Villiger got the number 10 spot on the Top 25 list, ABAM had three pairs (or six rollers) making Flor de Ynclan cigars. Now, that has doubled to six pairs. The factory also produces Villiger 1888 and La Libertad for the U.S. market.

Maragoto, who blended Flor de Ynclan for Villiger, told me that even though demand has grown, he doesn’t want to push his rollers. Each pair makes 350 Flor de Ynclans a day.

And here’s a bit of news that I found exciting: they have a new size—the Lancero. You won’t see it until later this year at IPCPR, but I smoked one during my visit, and it is indeed a remarkable cigar. It has all the elegance and refined sweetness that put the Robusto on the Top 25 list, but because of the shape, the smoke is more concentrated per puff and, therefore, intensified. Lanceros tend to do that, and this one is a beauty. (See my news story for more details.)

Here’s a bit of history about ABAM. It was started by Maragoto and his uncle Adalberto “Berto” Ruizcalderon. Now, these names might not mean very much to the average cigar fan, but if you were in the industry, especially during the Cuban diaspora, you knew who Berto was. Like many, he was a tobacco grower in Cuba before leaving after the communist regime took control of the country. He ended up working for Alfredo Perez of A.S.P. Enterprises, which is an enormous grower of tobacco, and then eventually opened up ABAM with his nephew Maragoto.

ABAM opened in 1996, right when the cigar boom was in full swing. Because of Berto’s connections, they were able to get tobacco at a time when it was difficult or impossible to get quality leaf, let alone any leaf at all. One of ABAM’s suppliers was Siegfried Maruschke.

“This is a relationships industry,” Maragoto told me during my visit. During that time, suitcases of money couldn’t get you premium tobacco, and a good connection was invaluable. It may sound a bit clannish, but from every story I’ve heard about boom-time tobacco, that’s simply the way it was. 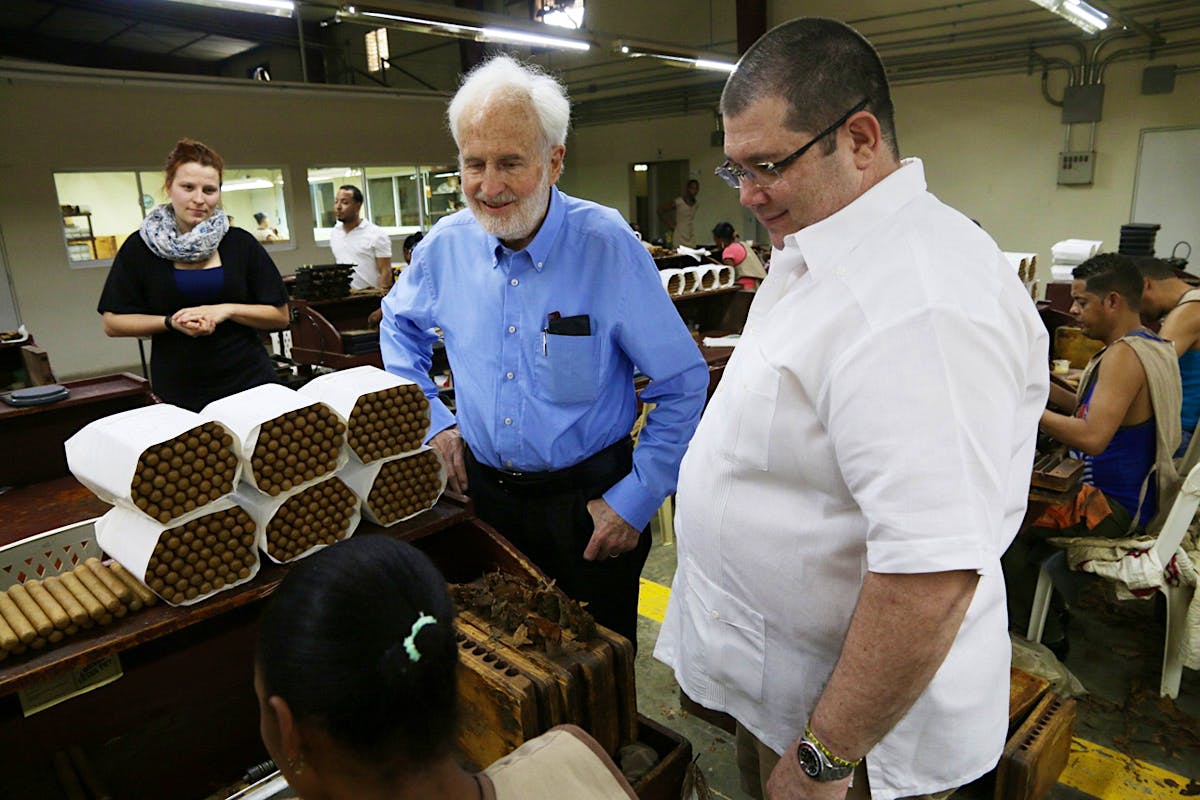 Heinrich Villiger, center, and Maragoto observe a roller at ABAM.

For many years ABAM worked in relative obscurity, producing bundle brands and private labels in a cramped space with only a few rollers.

As the story goes, the factory expanded and Maragoto connected with Heinrich Villiger, owner and chairman of Villiger Cigars. ABAM eventually produced Bock cigars, for Europe only. Villiger doesn’t own the rights for Bock in the United States. Gradually, ABAM made more and more brands for Villiger.

You might remember Flor de Ynclan’s original release in the U.S. The cigars weren’t particularly memorable and they were discontinued. But Villiger never gave up on the line. It’s hard enough launching a new cigar brand, but imagine relaunching one that was already dead?

ABAM is around 100,000 square feet and located in a free zone in the northern area of Santo Domingo. It holds about $2 million of tobacco in inventory, which constitutes about a year’s worth of stock.

About the name ABAM: each letter stands for someone in Maragoto’s family. His mother, his uncle, his wife (Aidee, who is his right hand in this operation) and himself (Maragoto).

“I share the last M with my brother,” he said with a chuckle.