Share
Cigar enthusiasts from all over the world have traveled far and wide to walk through this gate—the famed entryway to the Robaina farm.

On an overcast afternoon in February, late in the growing season, I took a trip out to San Luís in Pinar del Río to visit Hirochi Robaina on his famous tobacco farm in western Cuba. Continuing his grandfather’s tradition of careful cultivation, Robaina was hard at work growing what he believes to be the best tobacco in the world. Most of the year’s crop had already been harvested, barned and baled, but on this visit, Robaina still had some late-harvest wrapper leaf in the ground.

No cigar fan’s life is complete without making the pilgrimage out to “Vegas Robaina” at least once. Given the current climate—both political and pandemic—it seems unlikely that many will get to Cuba anytime soon, so here’s a look at the farm from a safe distance as this plot of soil celebrates its 175th year of fertility and bounty. 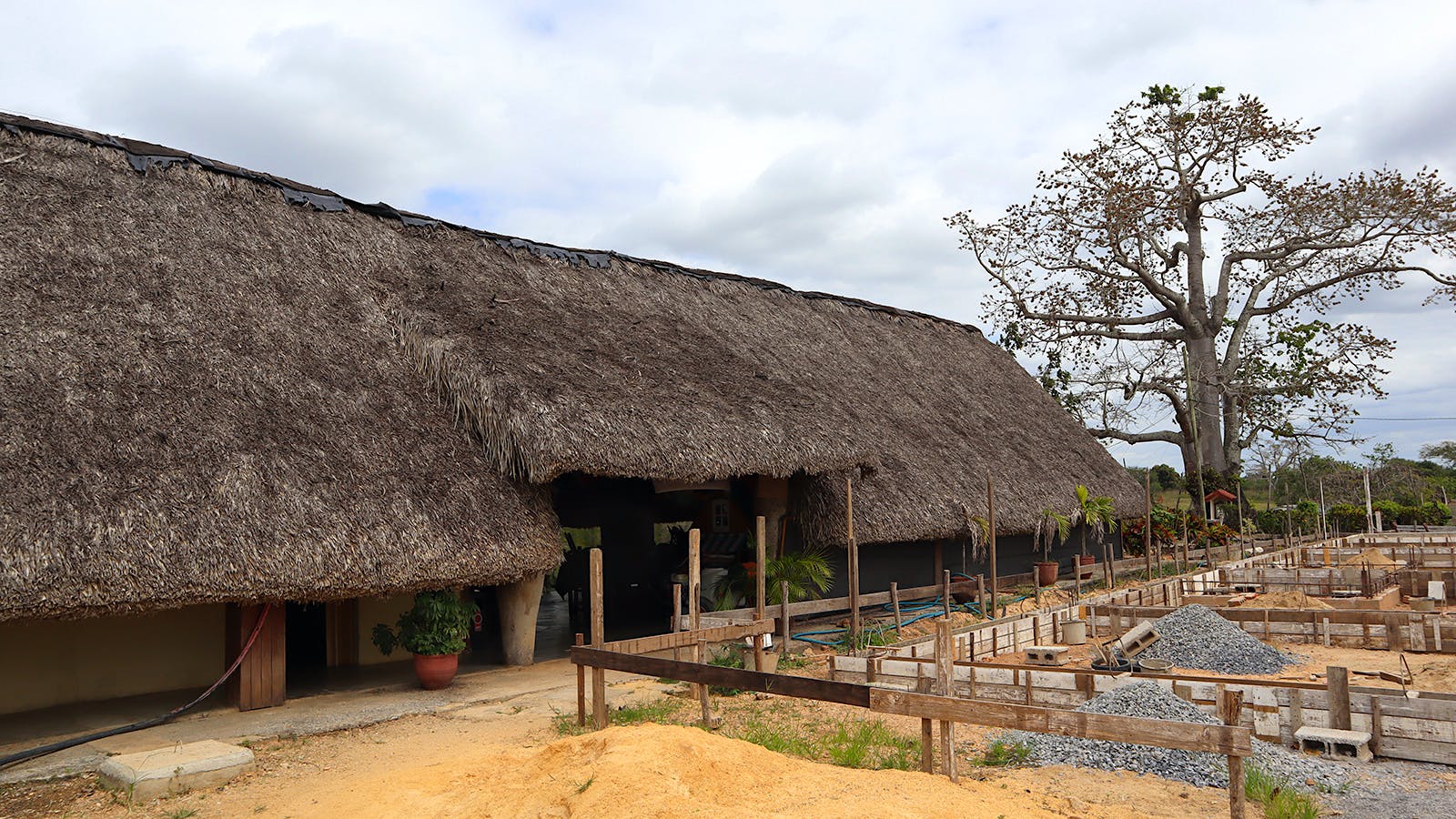 Guests are welcomed at this rustic, thatched roof pavilion. Note the new construction around the area. Robaina is in the midst of building new facilities on the site. 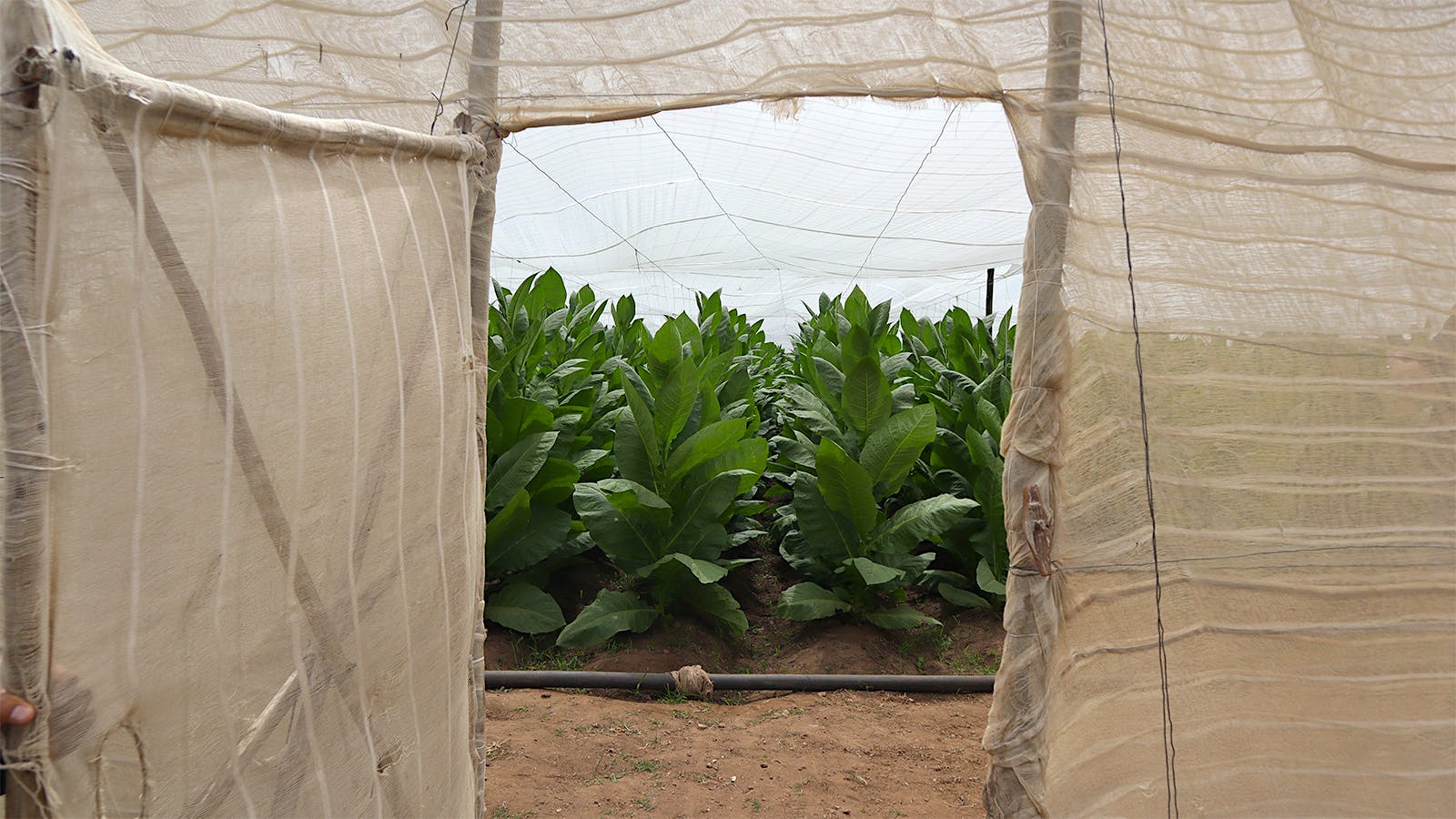 The tent door opens to verdant rows of wrapper leaf, grown under “shade” as the tents of cheesecloth filter the sun’s rays to prevent the tobacco from getting too dark or coarse. 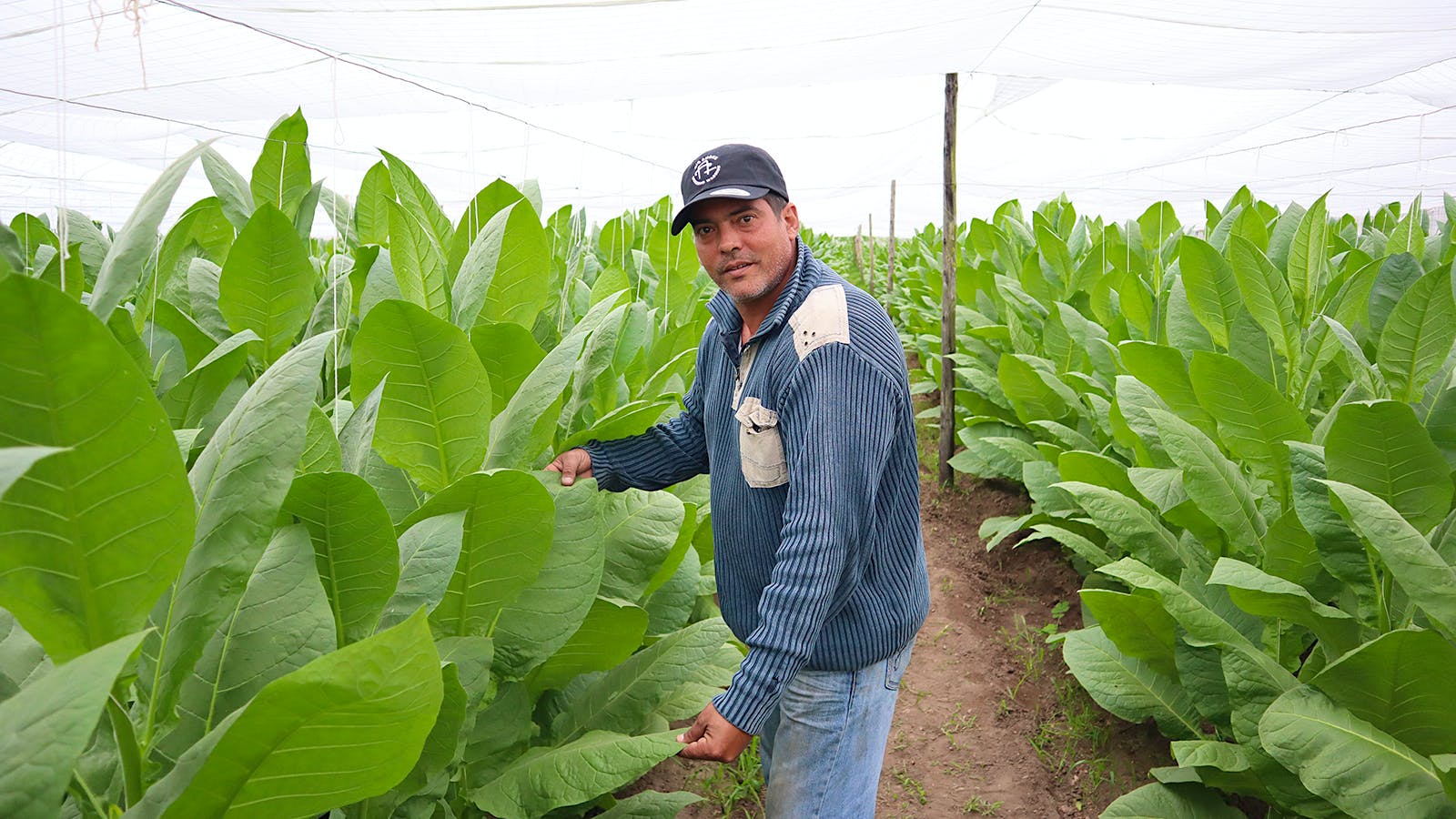 Hirochi Robaina, grandson of the late Alejandro Robaina, shows off some late-harvest tobacco that’s nearing maturity. In late February, he was very optimistic about the 2019-2020 crop. 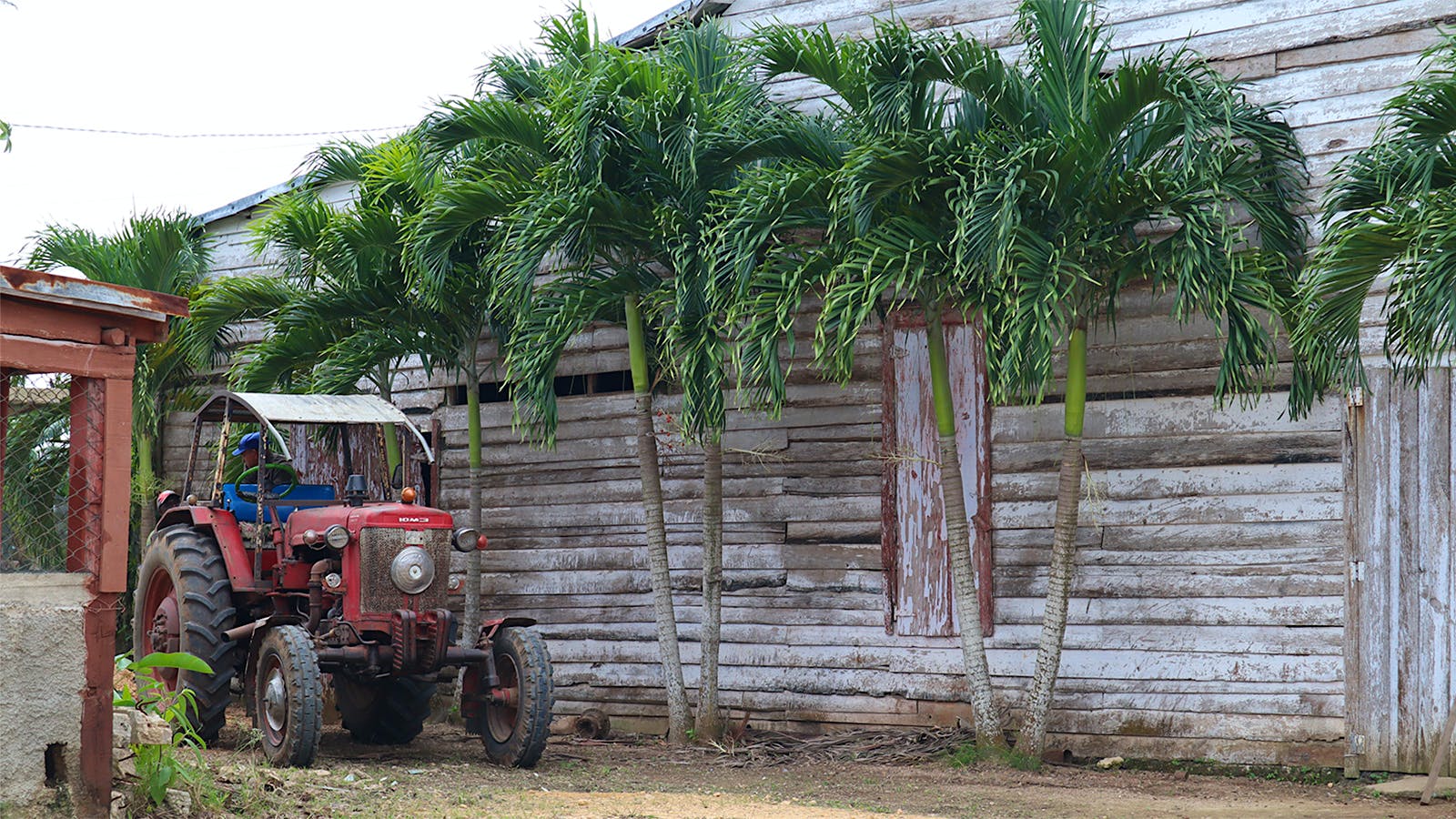 The weathered slats tell a tale of time, tobacco and tenacity, as this picturesque barn has been curing Cuban leaf for decades. 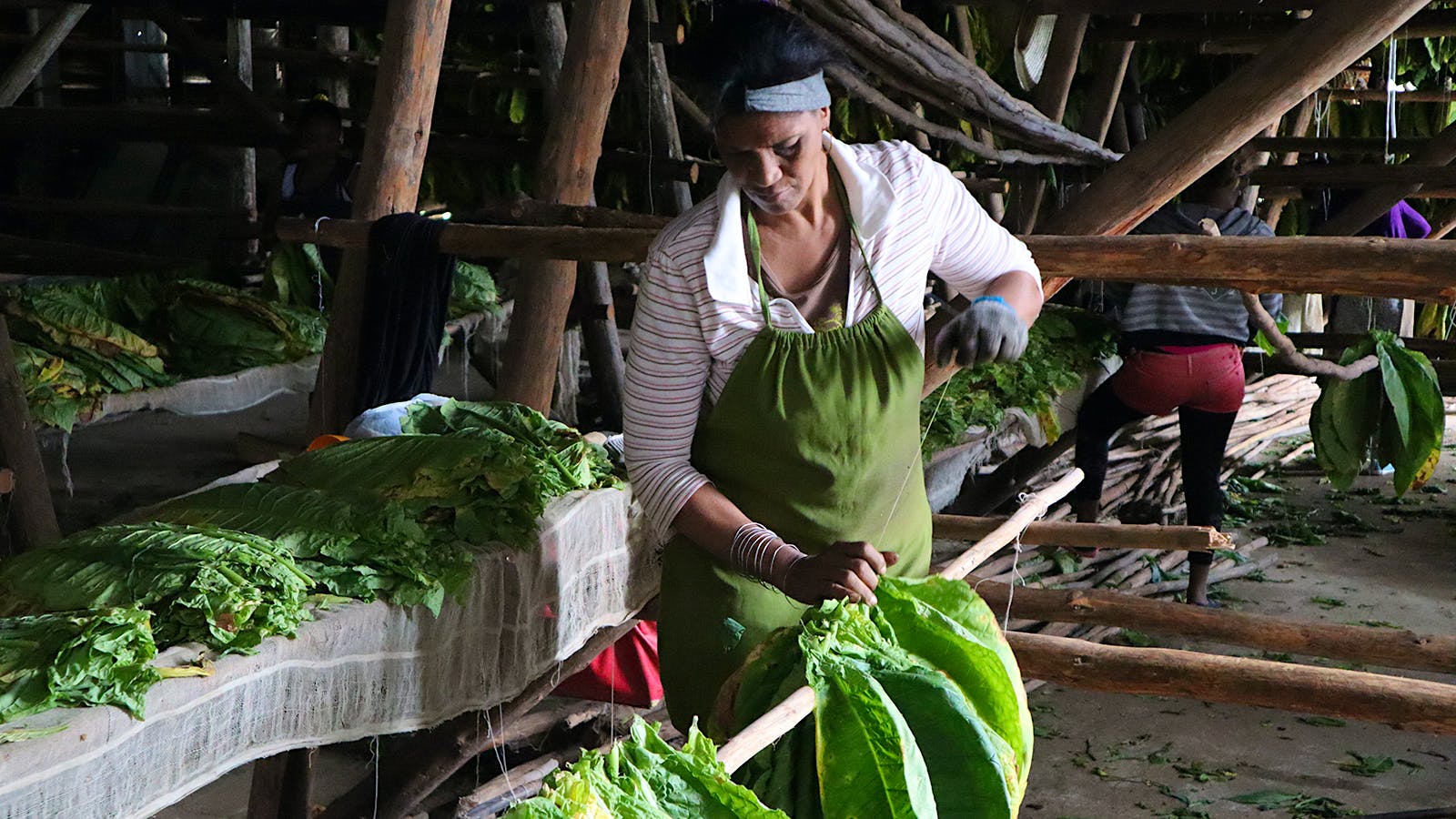 In the curing barn, a worker strings together four freshly harvested leaves by the stalk so they can hang evenly in groupings on a long, wooden pole called a tobacco lath, also known as a cuje. 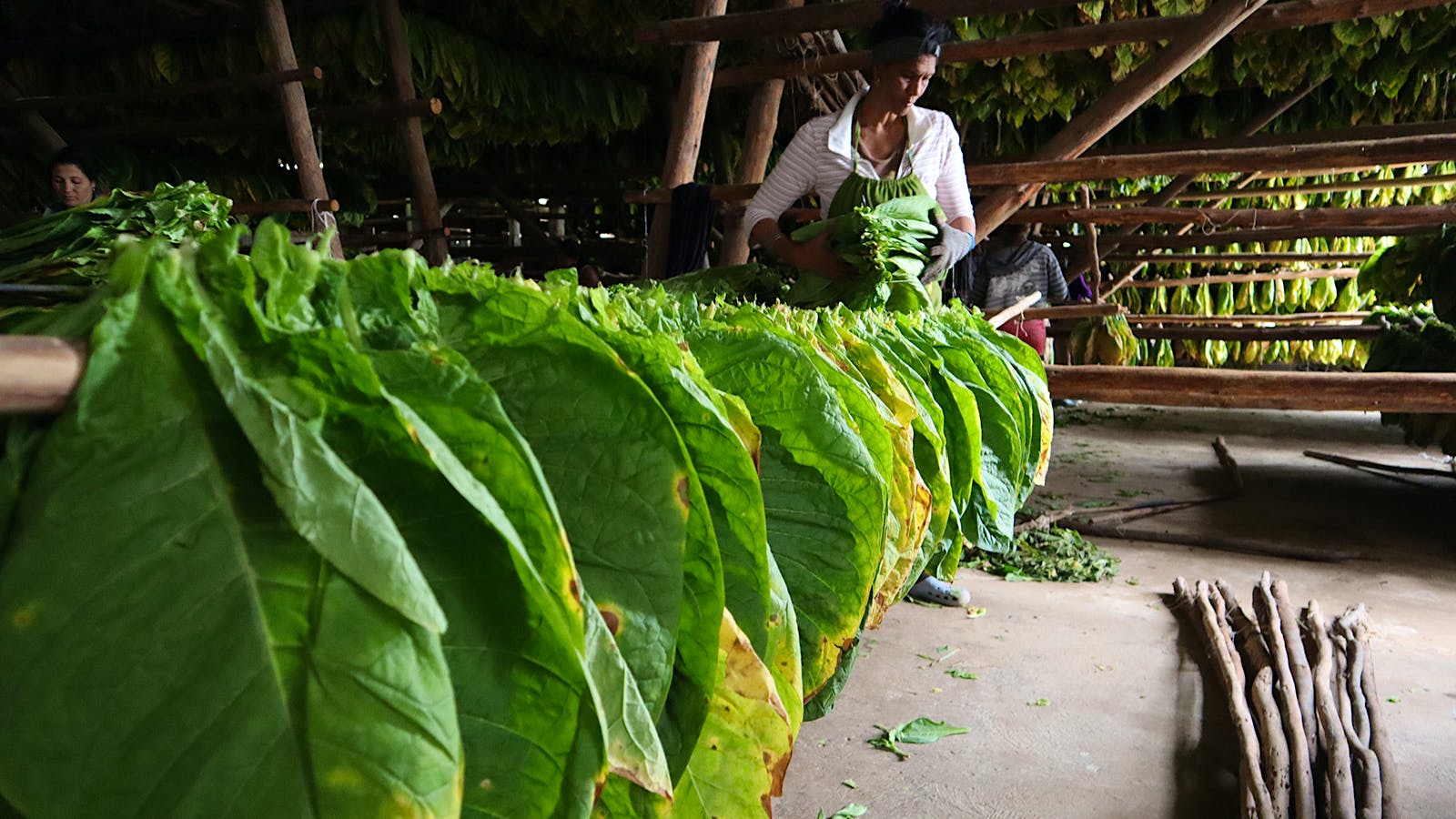 This long lath bows a bit under the weight of all that tobacco. Once completely loaded with leaf, it’s carried off and hung on the barn rafters to dry. A pile of laths sit on the floor awaiting more tobacco. 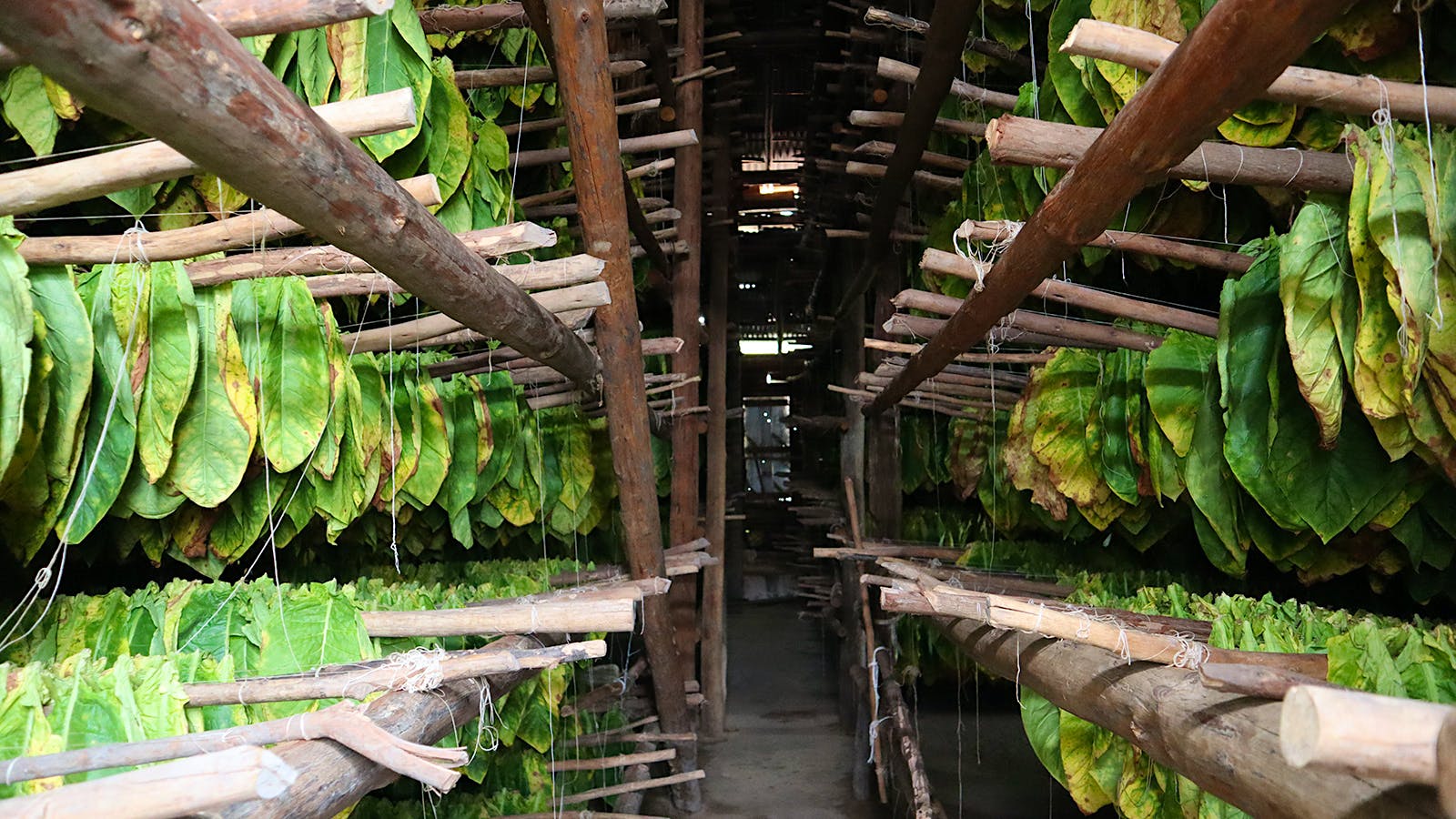 Now that the barn is full from floor to ceiling, the tobacco can start the curing stage, where each leaf sheds water and turns from green to yellow to brown. It spends about 40 to 65 days drying in the natural air of this well-ventilated structure. 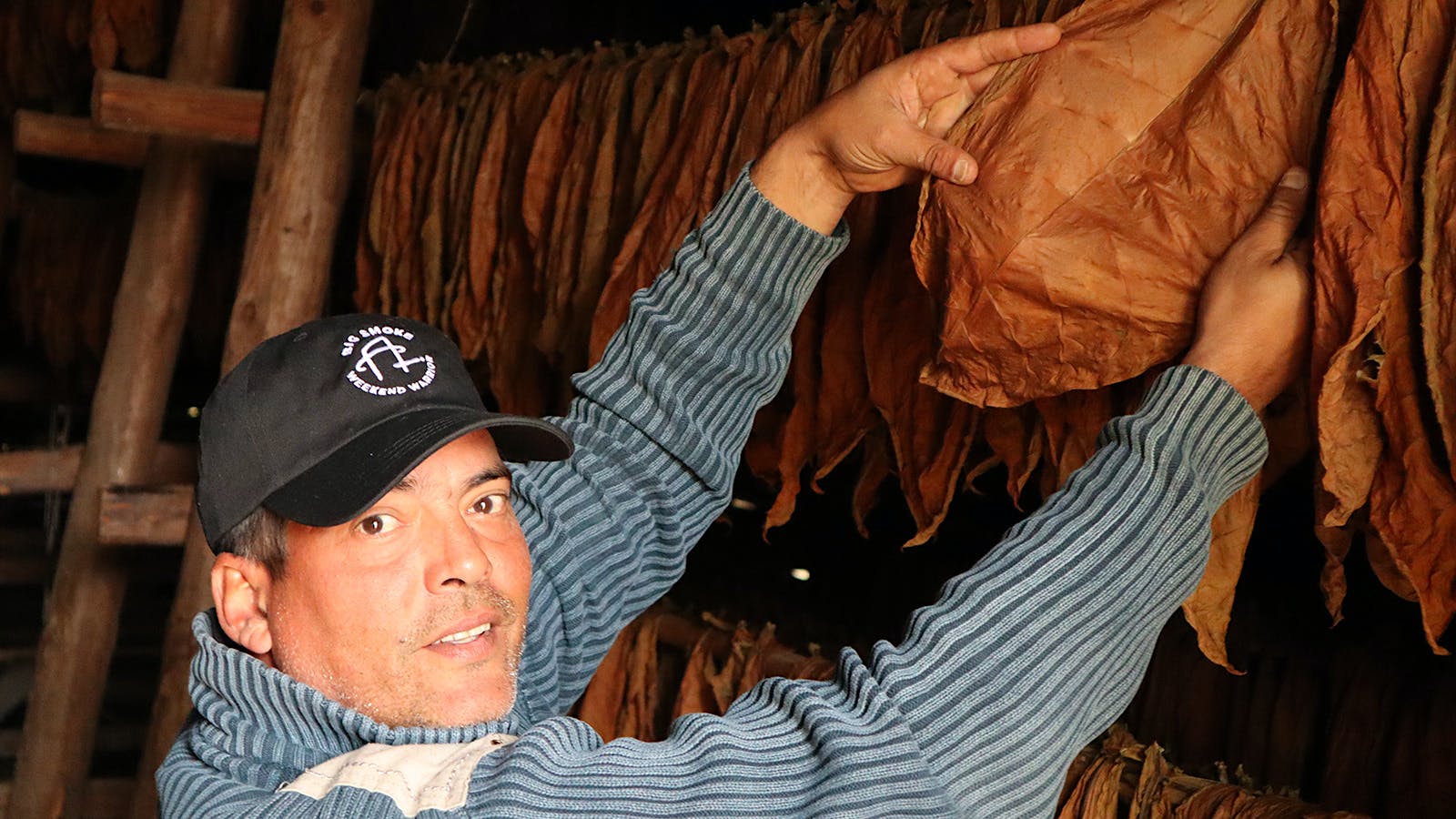 Inside another barn, the tobacco is much further along in the natural curing process and nearly ready to begin the fermentation process, and later, will be baled for long-term aging. 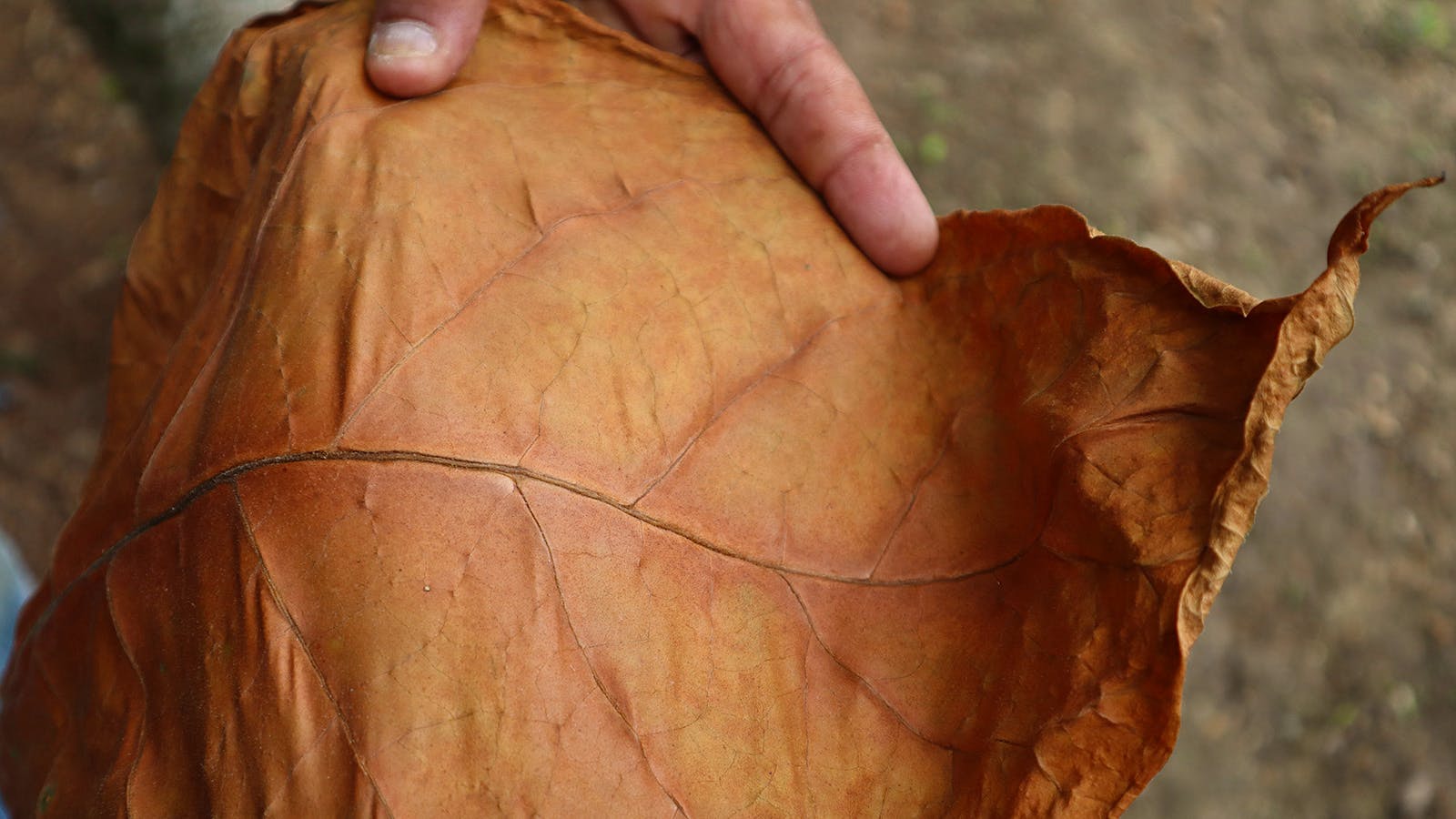 Notice the tobacco’s elasticity and rich hue. This wrapper leaf is on its way to attaining the perfect, reddish-brown shade of colorado that all wrapper aspires to. 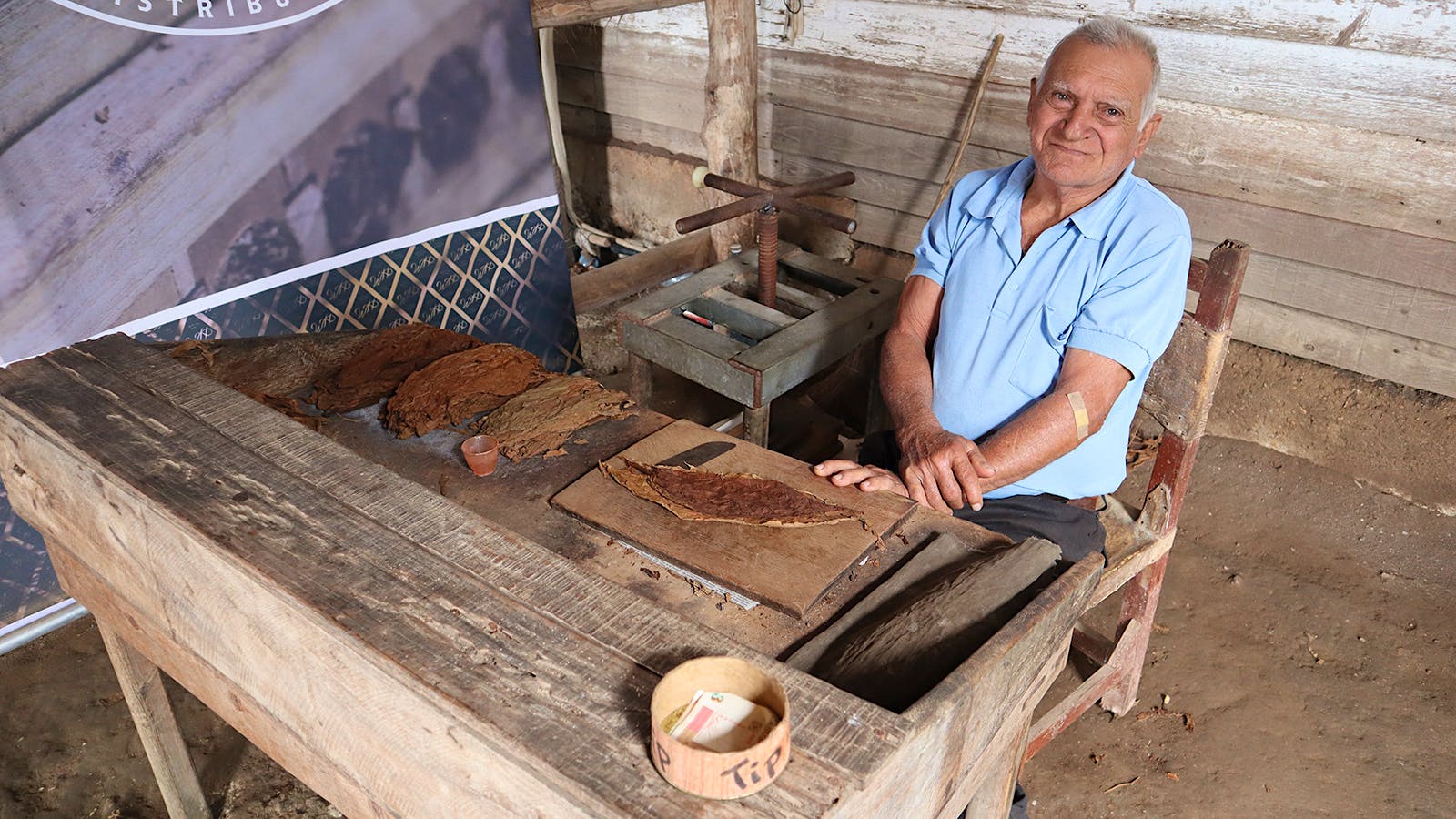 Single-estate cigars like the ones rolled here by Maximino “Mamino” Gonzalez Gomez are rare in Cuba, as Cuban brands produced commercially contain tobacco from all over Pinar del Río. He’s been working on the farm for 54 years. 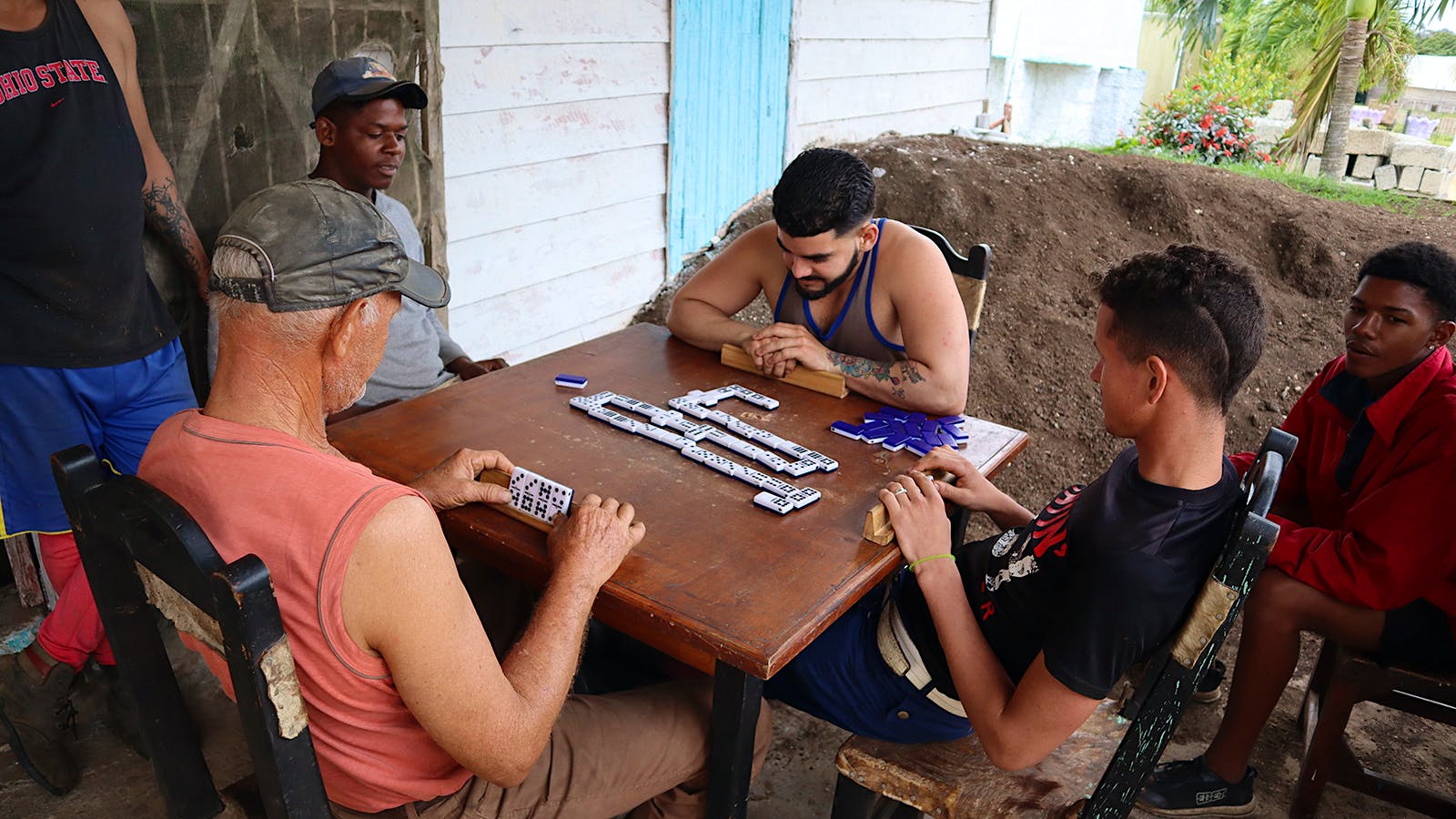 Break time. Now that the barns are full, farm workers can take a breather and sneak in a game of dominoes. 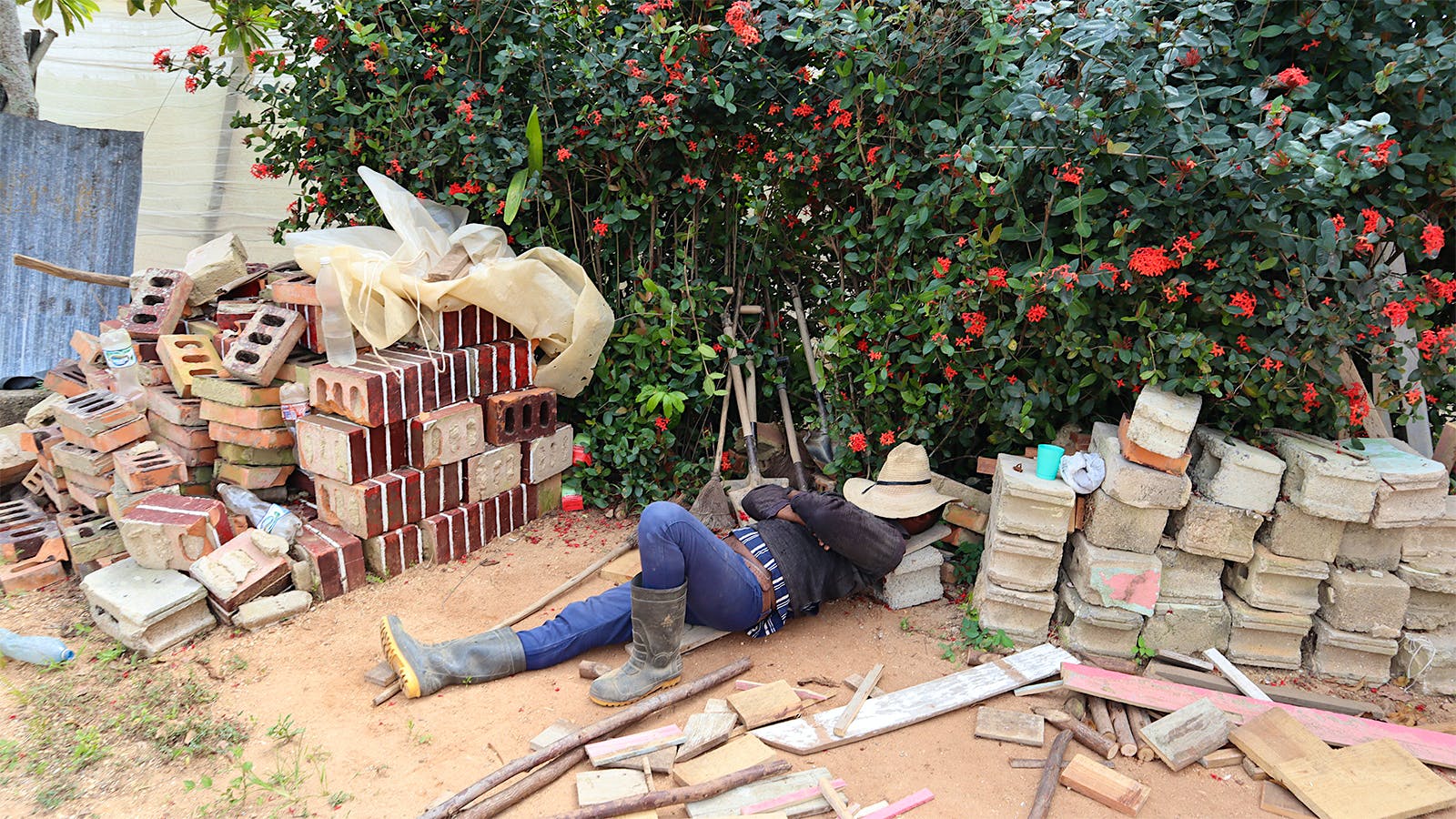 At this rate, it may take a while before the new construction is complete. 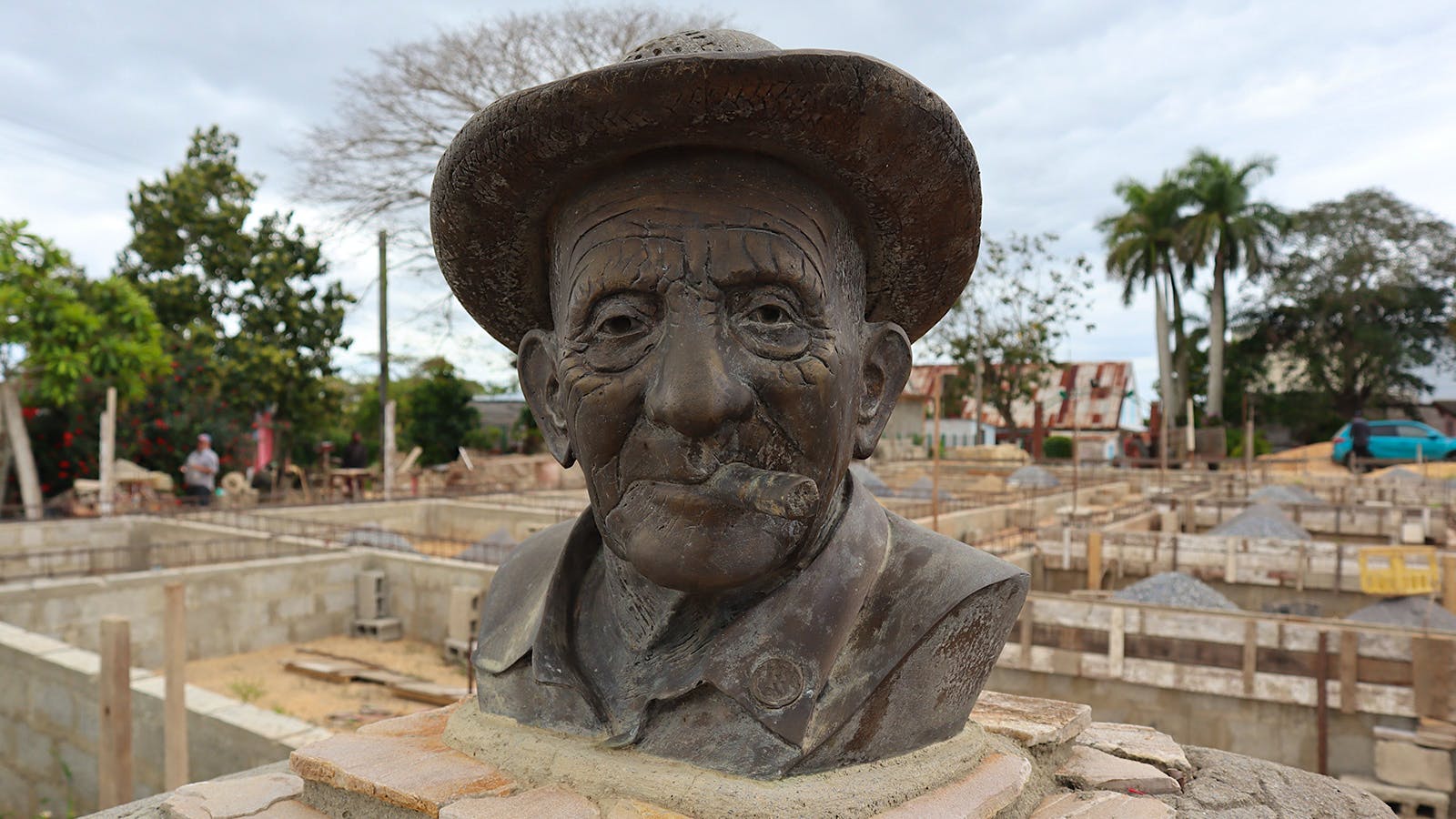 Although he’s passed on, Don Alejandro Robaina’s spirit will always be present with every leaf of tobacco grown on the farm. He’s memorialized here in bronze keeping a watchful eye on his legacy.
Cuba