Share
El Laguito is one of many beautiful mansions in Havana's tree-lined Miramar section, and it has been Cohiba's home factory for many years.

If some of the trim work around the El Laguito cigar factory in Havana seems to be a yolkier shade of yellow than you remember, it's not your imagination—El Laguito just got a paint job. While the rest of the mansion-cum-cigar factory is still that softer, pastel shade of yellow, the exterior columns now have the color of a school bus or taxi cab.

All of Havana seems to be getting a paint job. I hear it's because President Obama is making an appearance soon, so everything is getting spruced up, including El Laguito. Inside, it's more of the same. Decorative molding and other interior architectural accents have also been slathered in this overstated safety paint. It stands out, that's for sure. I think the trim used to be white. 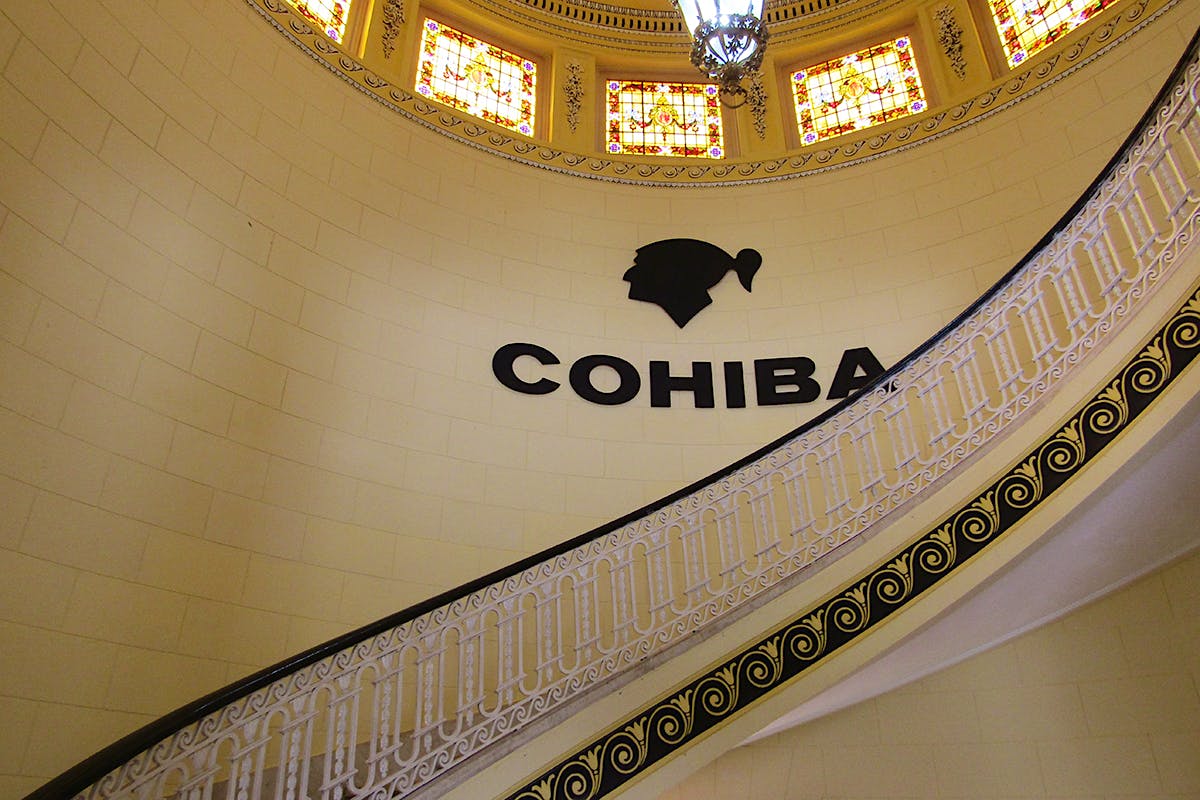 The sweeping spiral staircase is the first thing you see in the lobby of the El Laguito cigar factory.

El Laguito is one of many beautiful mansions in Havana's tree-lined Miramar section, and it has been Cohiba's home factory for many years now, but you can tell when you walk in that it used to be the residence of a very wealthy man. (Ahhh, the majestic symmetry of Beaux-Arts architecture.)

There's a sweeping spiral staircase in the lobby and two smaller salons furnished with rolling tables on either side of the main foyer. This is much different than the large, open rolling rooms you see in most cigar factories. You'd think that the smaller spaces would make each room feel stuffy or cramped, but the tall windows let in a lot of light and give each salon an airy feel. What used to be a dining room, sitting room, tea room or parlor is now the place where Cohibas are made on a daily basis. 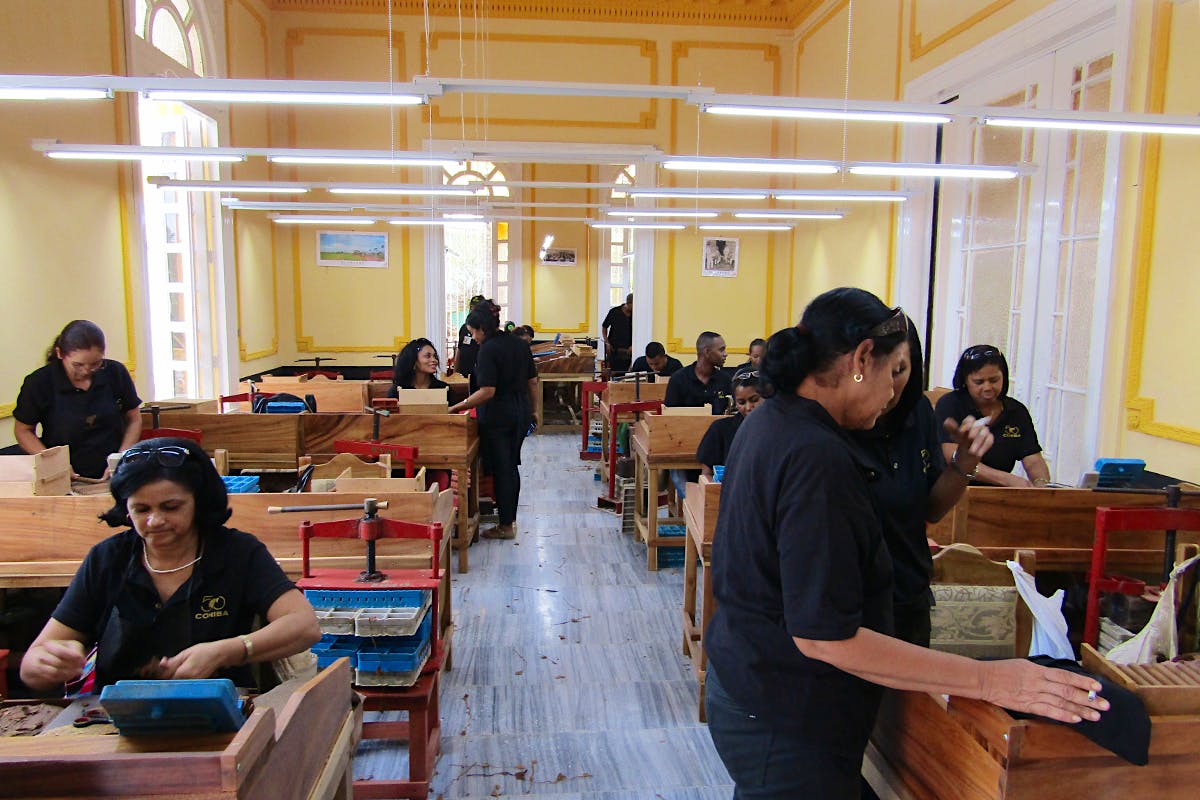 One of the two smaller salons on either side of the main foyer is furnished with rolling tables.

On the day I went, most of the factory was making Siglo VIs. As David Savona said in his blog on El Laguito, each room has its own pace and its own feel, but there were no Behikes being rolled when I went. I guess Siglo VI was the cigar of the day. Everywhere you looked you saw stacks of these Cañonazos on just about every table.

Look more carefully and you see some rollers making Robustos and even a few Lanceros, but no Cohiba Behikes, which is one of Cuba's most sought-after cigars. The collective efforts seemed to be for the Siglo VI. 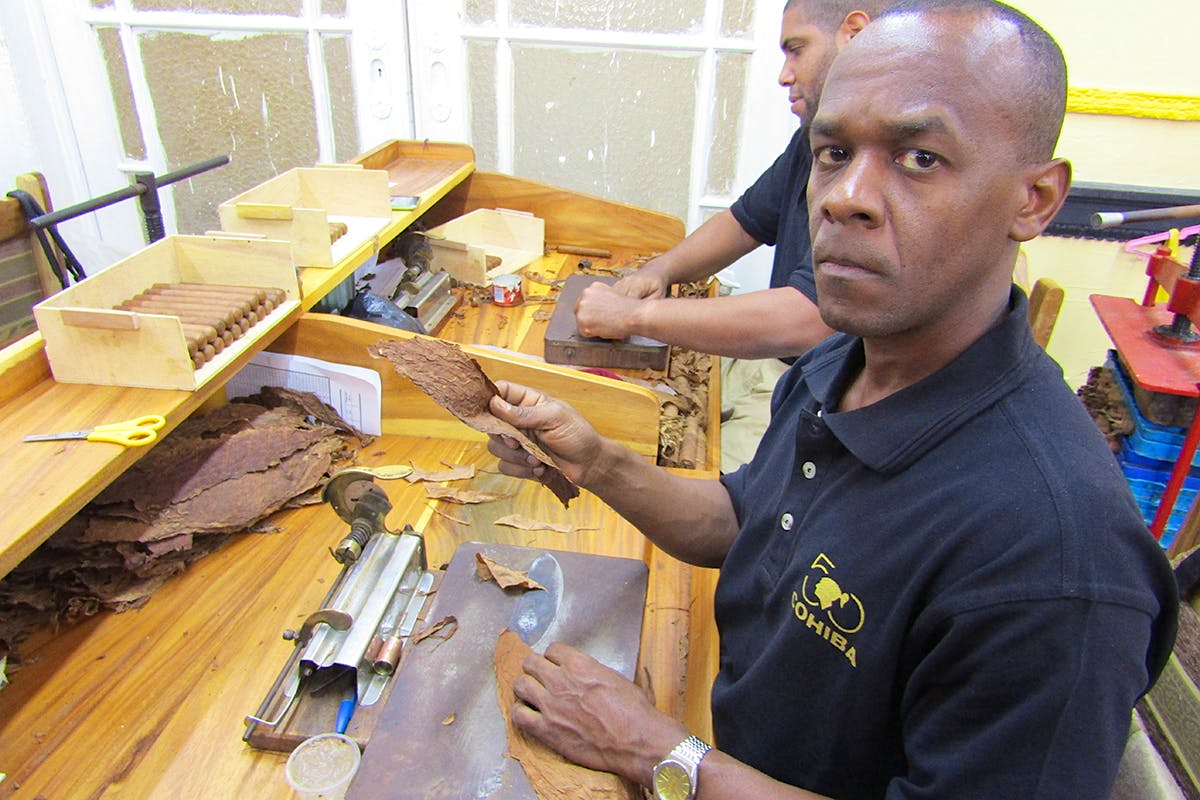 A roller holding up ligero tobacco. Only half a leaf of ligero goes into a Cohiba Siglo VI.

Did you know that the Siglo VI only contains a half leaf of ligero per cigar? That's the strongest type of tobacco, which is grown out in the open sun and harvested from the top part of the plant. Oily and powerful, ligero is usually blended to give a cigar some body. At 5 7/8 inches by 52 ring, it's one of the thicker Cohibas on the market, but, despite its girth, it only gets half a ligero. At least that's what a roller told me as he held up the leaf. I suppose if anyone is working off the official Siglo VI recipe, it's these rollers at El Laguito. 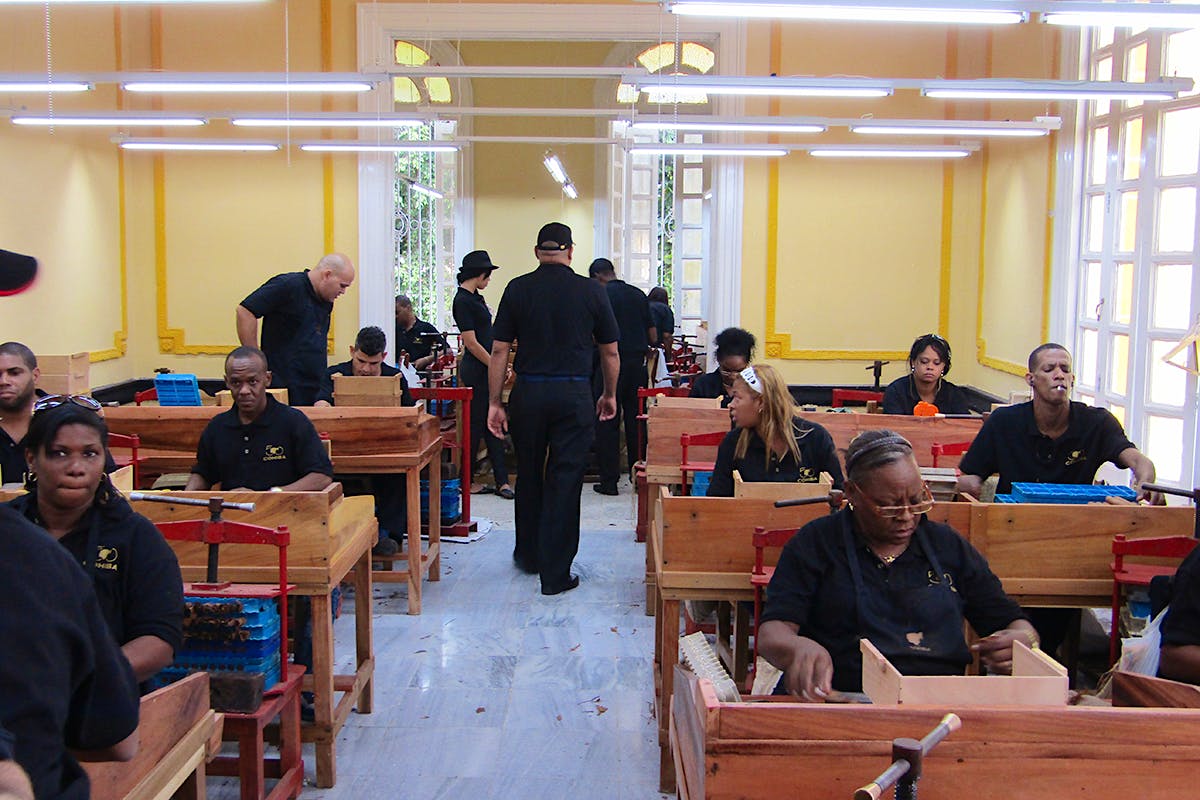 Cigar rollers making Cohiba Robustos, Siglo VIs and even a few Lanceros, but no Behikes.

Sometimes other brands are produced here, as well. I was told that when that happens, the "engineers" from the other factories come in to oversee production of the other brands. "Engineers" was my tour guide's word, not mine.

And speaking of tours, I must say that the entire El Laguito operation seemed rather aloof. In other cigar-producing countries, where the factories are privately owned, it's up to each individual owner where you can and can't go. Normally, they let you see everything. Here, they sort of rush you through. It's as if they want you to have only the most elementary idea of what they're doing. 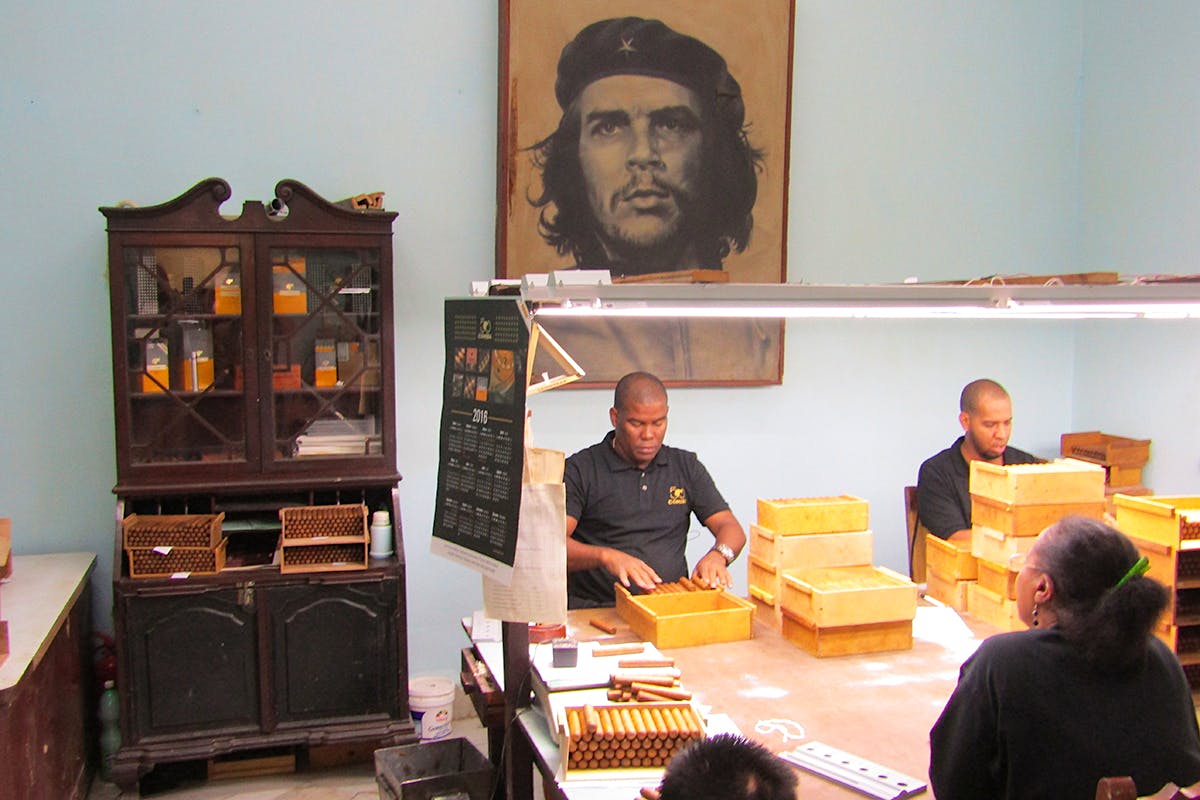 Once you start to look too closely or linger too long, you're quickly ushered into the other room. Try to backtrack, and you're told to keep it moving. Fermentation rooms? Large pilons of tobacco? Aging rooms? Off limits. And don't even think about taking a cigar off one of the rolling tables to smoke. While that might be OK in the Dominican Republic, I'd probably be tossed in El Laguito's dungeon if I tried that here. Or worse yet, never invited back to ever see a factory in Cuba again. 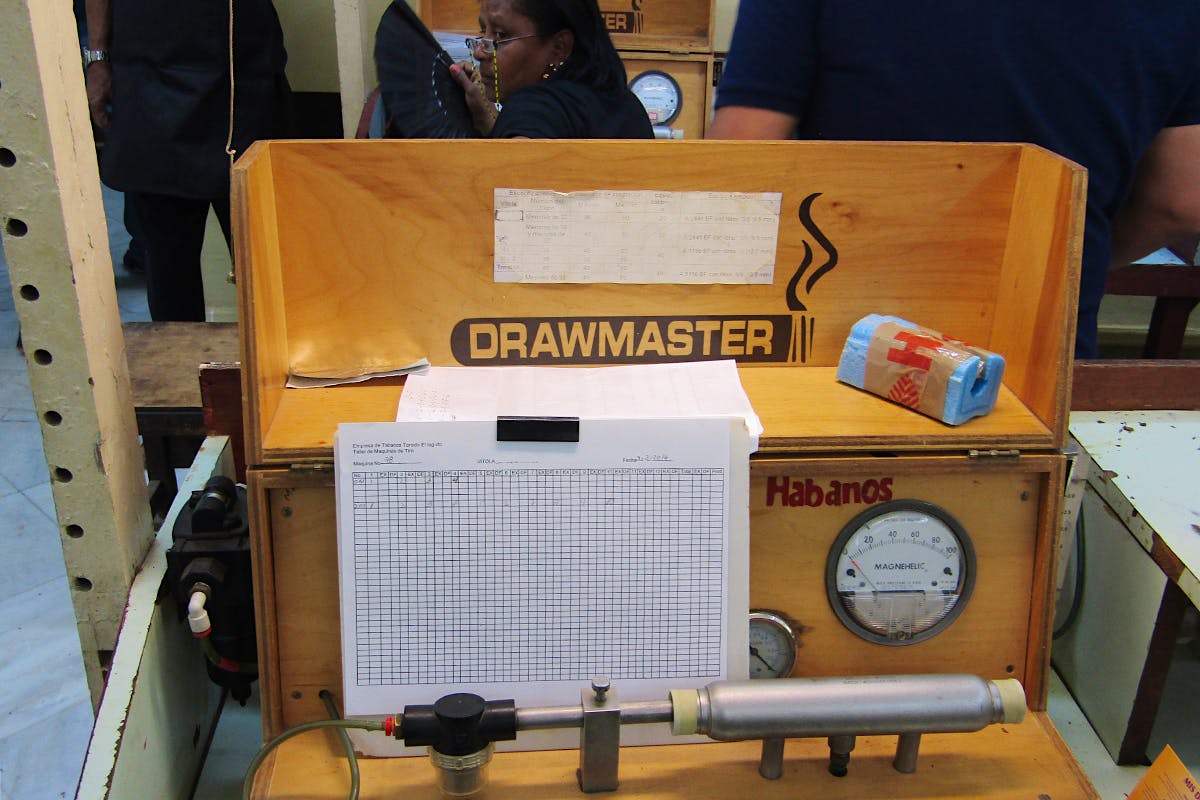 The Drawmaster machine inside one of the quality control rooms aims to weed out plugged cigars.

Outside, I strolled gingerly through a covered walkway to the quality control building, which is adjacent to the mansion. Like the stripping room, it's in a nondescript structure on the property of the mansion—kind of like a guest house, but for tobacco. Quality control is where they check cigars for color consistency before each stick is banded up and boxed. Every cigar in each box has to be the same color. This is industry standard in most factories, Cuban or not. 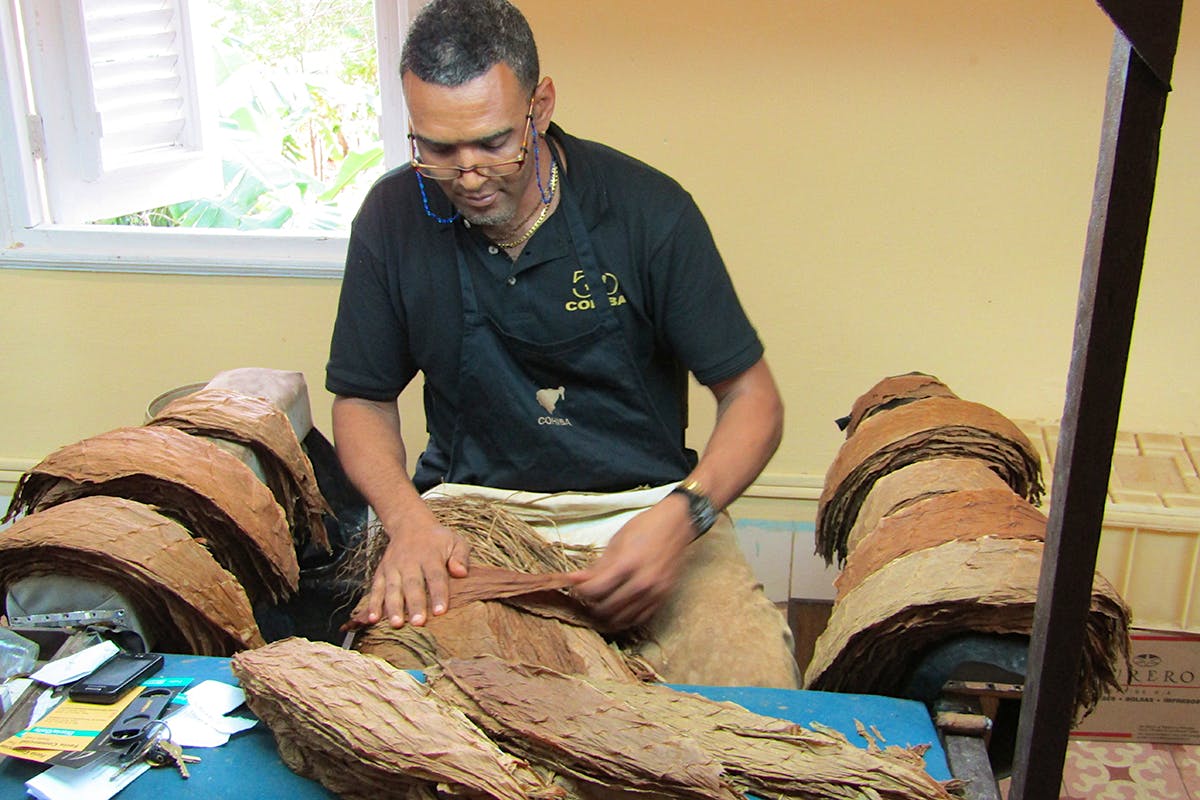 A worker removes the central veins from wrapper leaves in the despalillo or stripping room.

Of course, the color-sorting tables were full of Siglo VI cigars, but they were banding up some Cohiba Esplendidos, too. I managed to flip over a few boxes and see some factory codes stamped on the bottom. They all read "AMO MAR 16." Some still read "FEB." For those of you interested in exactly which factory your Cuban cigars came from, AMO is one of the 2016 El Laguito codes. For now anyway. Perhaps they'll switch that code once production goes into April or May. 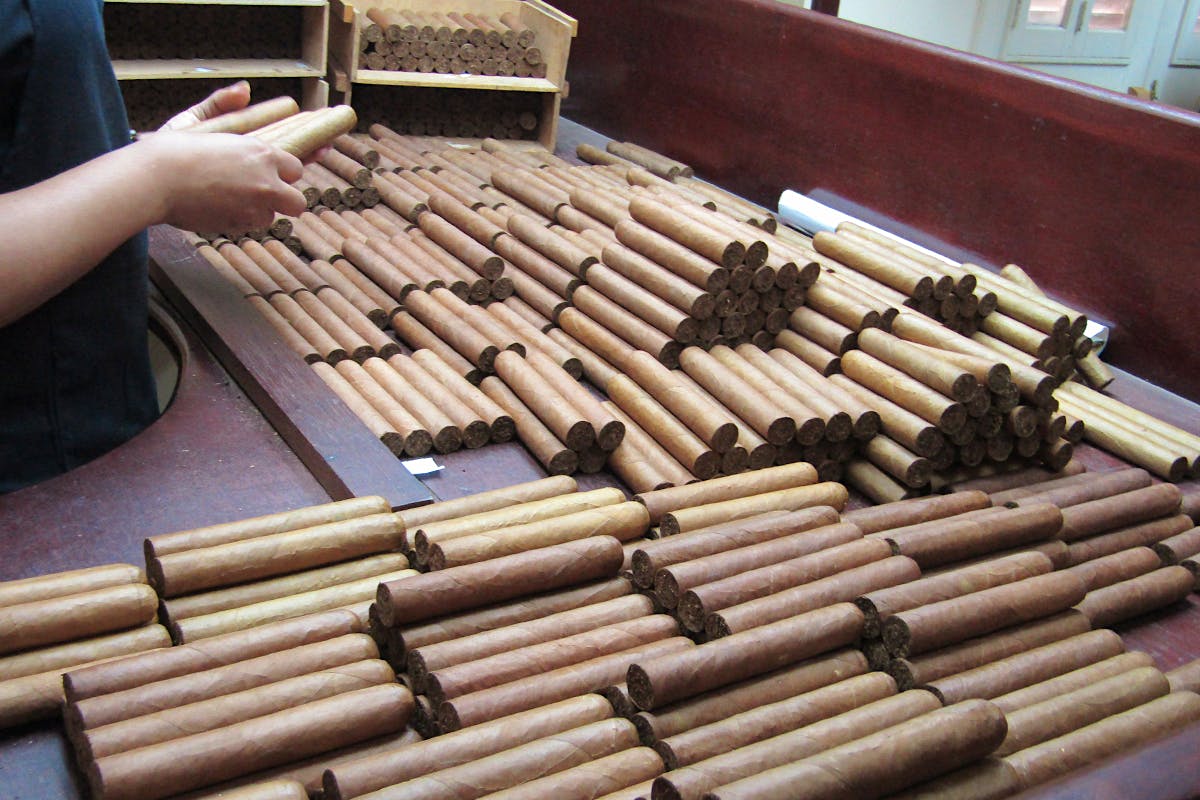 Quality control is where they check cigars for color consistency before each stick is banded up and boxed.

I also saw one woman banding up Cohiba Majestuosos 1966. It's one of the two hefty, commemorative cigars rolled in honor of Cohiba's 50th anniversary. I didn't see any boxes though, so these were most probably rolled and banded for the final Cohiba dinner last Friday night. All guests of the final dinner got two of these cigars.

At the end of the tour, we wound up in an unremarkable chamber that finally led outside. A woman handed me a Cohiba Siglo I in a glossy yellow tubo. The tour was over, and all I got was a Siglo I. 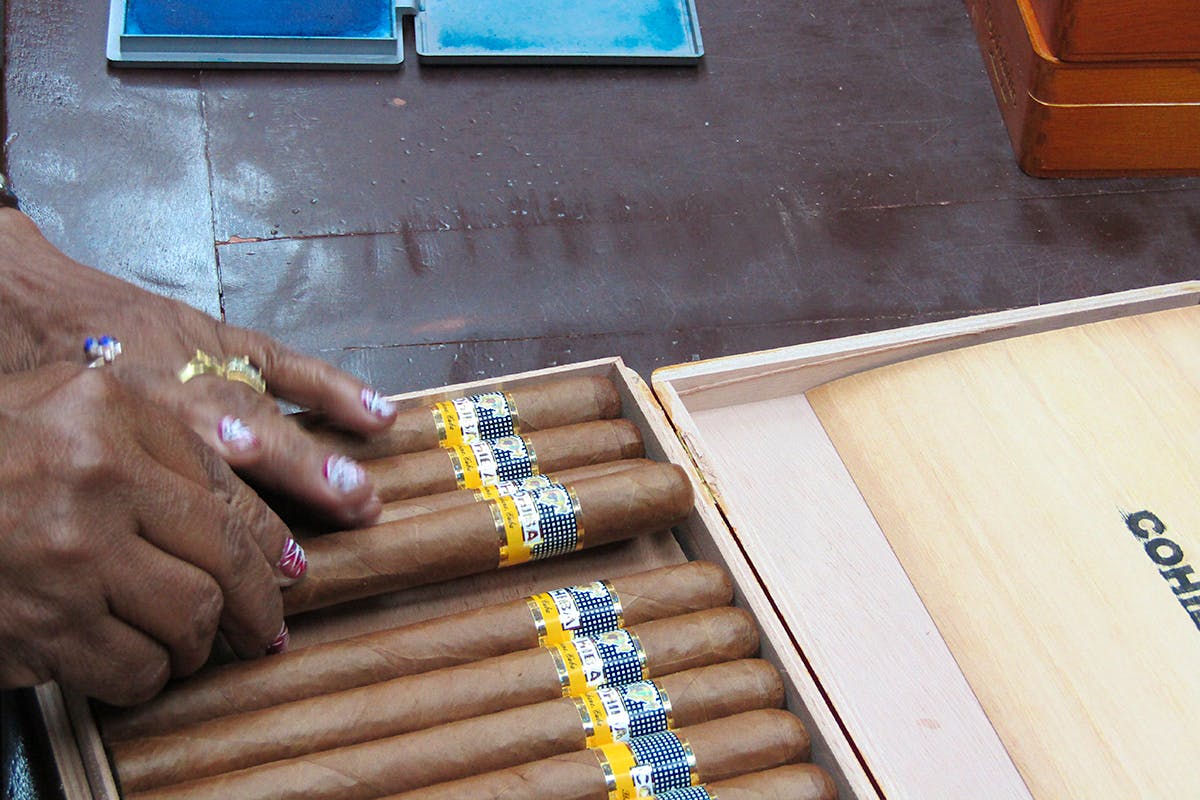 It all seemed so fast. One big yellow blur. I tried to go back inside but was told by a man with a walkie-talkie that this was impossible. At that point, I kind of felt like Charlie Bucket at the end of Willy Wonka and the Chocolate Factory when Wonka screams: "You get nothing! You lose! Good day, sir!" I could have given the cigar back to the factory owner, just like Charlie did with his gobstopper, but who was it? Who owns this place? The answer is nobody. And everybody. Part of the mystique I guess. 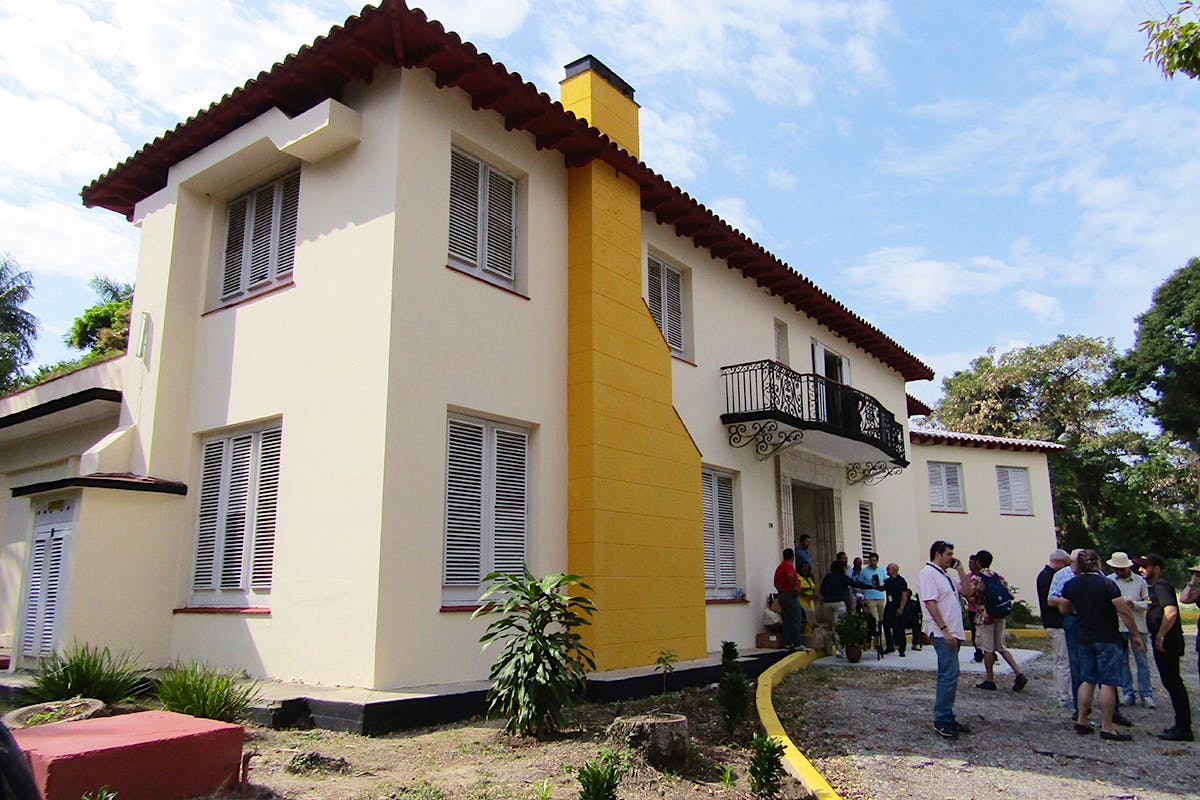 The end of the tour outside the quality control building.

I must admit that I was a little disappointed at only getting a tiny 4 inch by 40 ring Siglo I after seeing all those hundreds—if not thousands—of Siglo VI cigars all over the factory. Then again, a Siglo I is always better than a Siglo none.