With the Habanos Festival over and Covid-19 hamstringing any travel, it isn’t likely that you’re getting to Havana, or a cigar factory for that matter, anytime soon. If you’re quarantined like I am, you probably haven’t left your zip code in months, so I figured this would be a good time to take you on a virtual tour of the Partagás Factory in Cuba.

There are 40 or so cigar factories across the island of Cuba, and Partagás is what I like to call one of The Big Four with H. Upmann, La Corona and El Laguito completing the quartet. Despite the name, other brands are produced here as well–everything from Partagás, Cohiba and Romeo y Julieta to Bolivar and Quai d’Orsay.

Don’t confuse this factory with the Partagás store, which is located behind the capital building. That’s often referred to as the “Partagás Factory” because it’s located at the base of the old facility. The building’s facade has become a rather iconic image, but the old rolling and production spaces are now closed, and the shop is just that: a cigar store (one of Havana's Casas del Habano) and a major tourist destination. The real Partagás Factory relocated to the corner of Calle San Carlos and Penalver Street in Central Havana a few years ago.

Hopefully, these photos take your mind out of quarantine for a little while and into the often closed-off world of handmade, Cuban cigars. 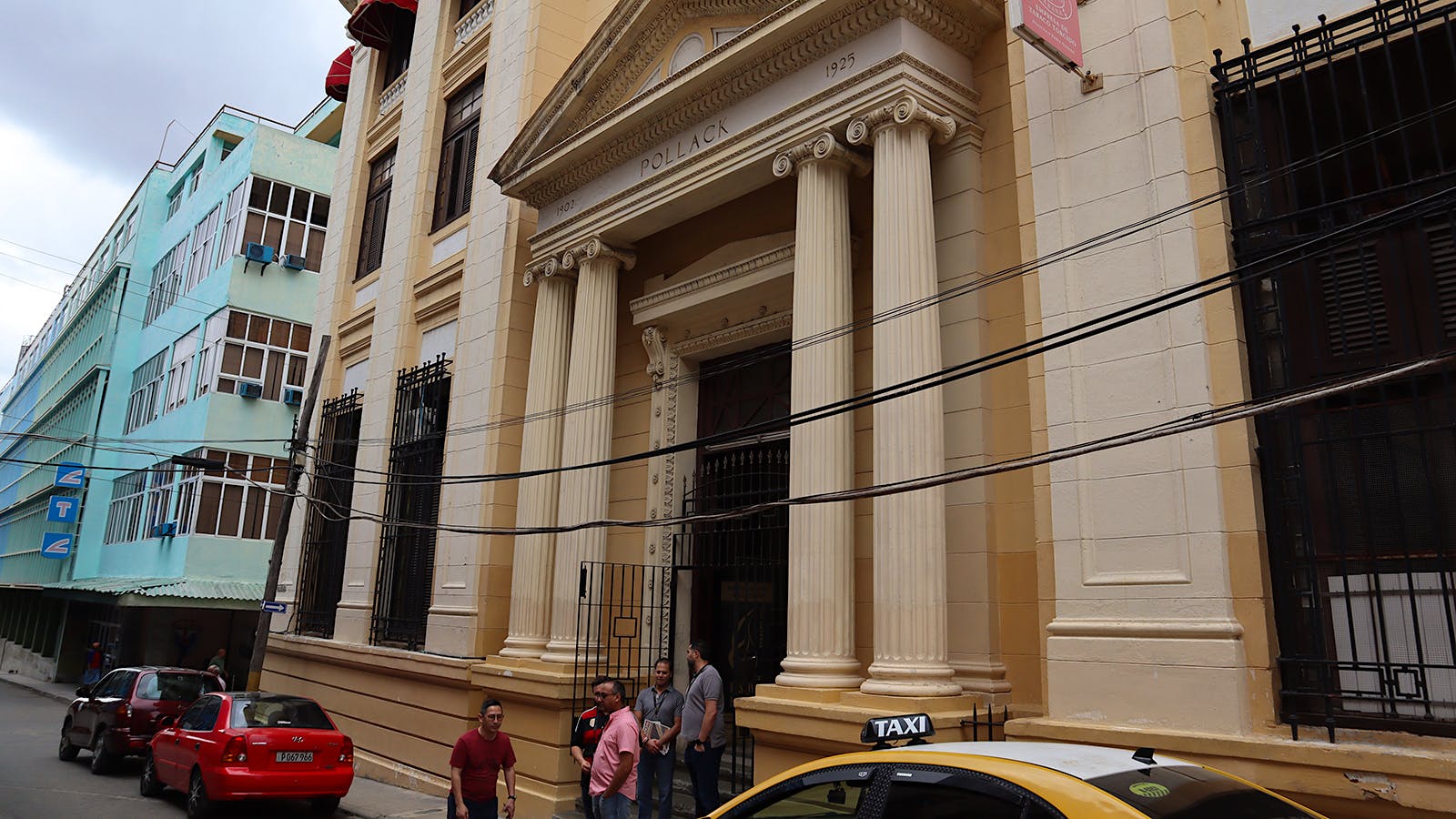 The facade of the modern Partagás Factory might not be as recognizable as that of the original location behind the Capitol, but its columns and iron gate give it a distinction of its own. Notice how it says “Pollack” above the entrance. This building used to be a tobacco warehouse owned by leaf broker Pollack y Compania S.A. before the Revolution. 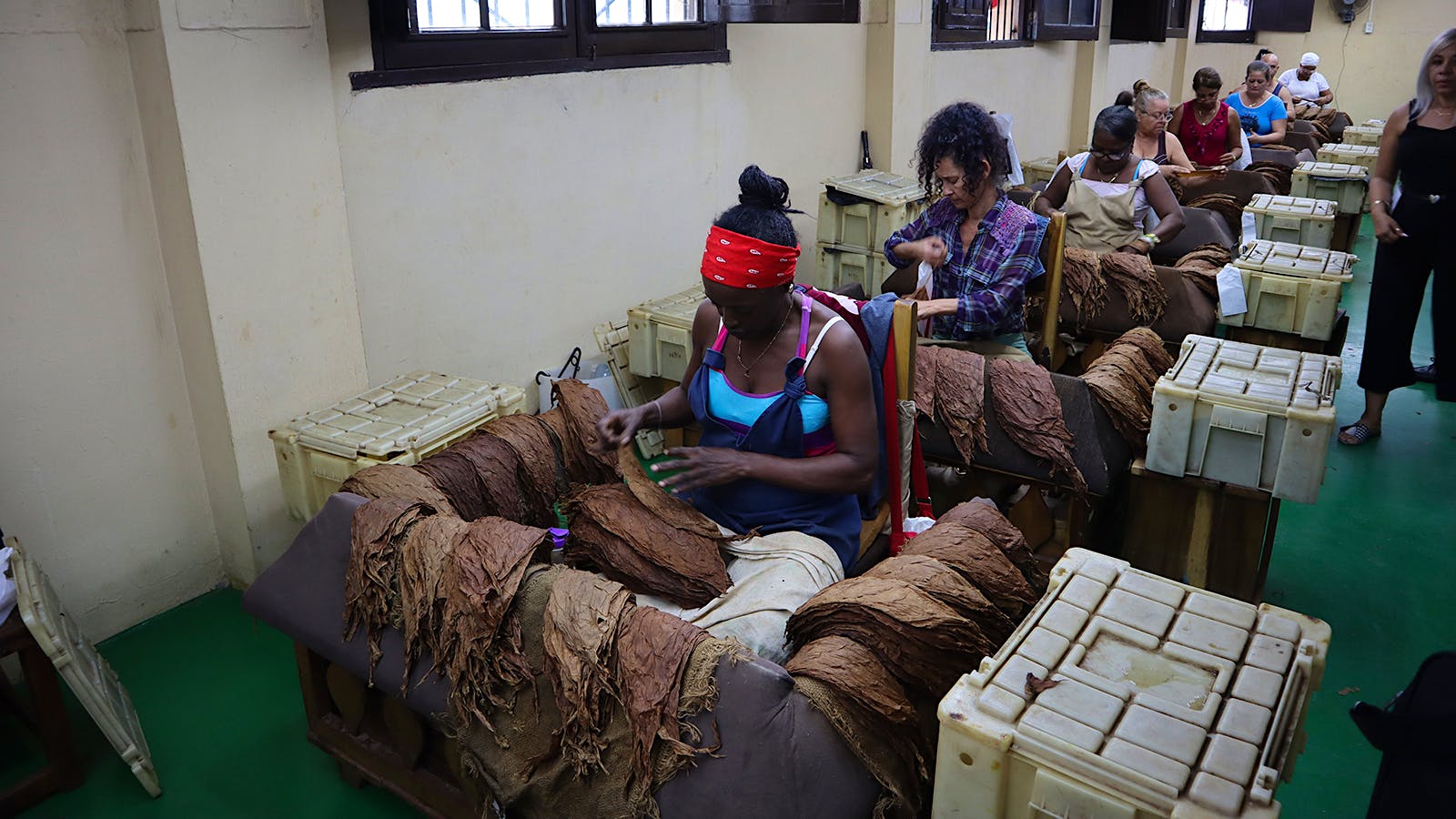 In the destemming (or despalillo) room, these women remove the central vein from wrapper leaves by hand before sorting them by color. 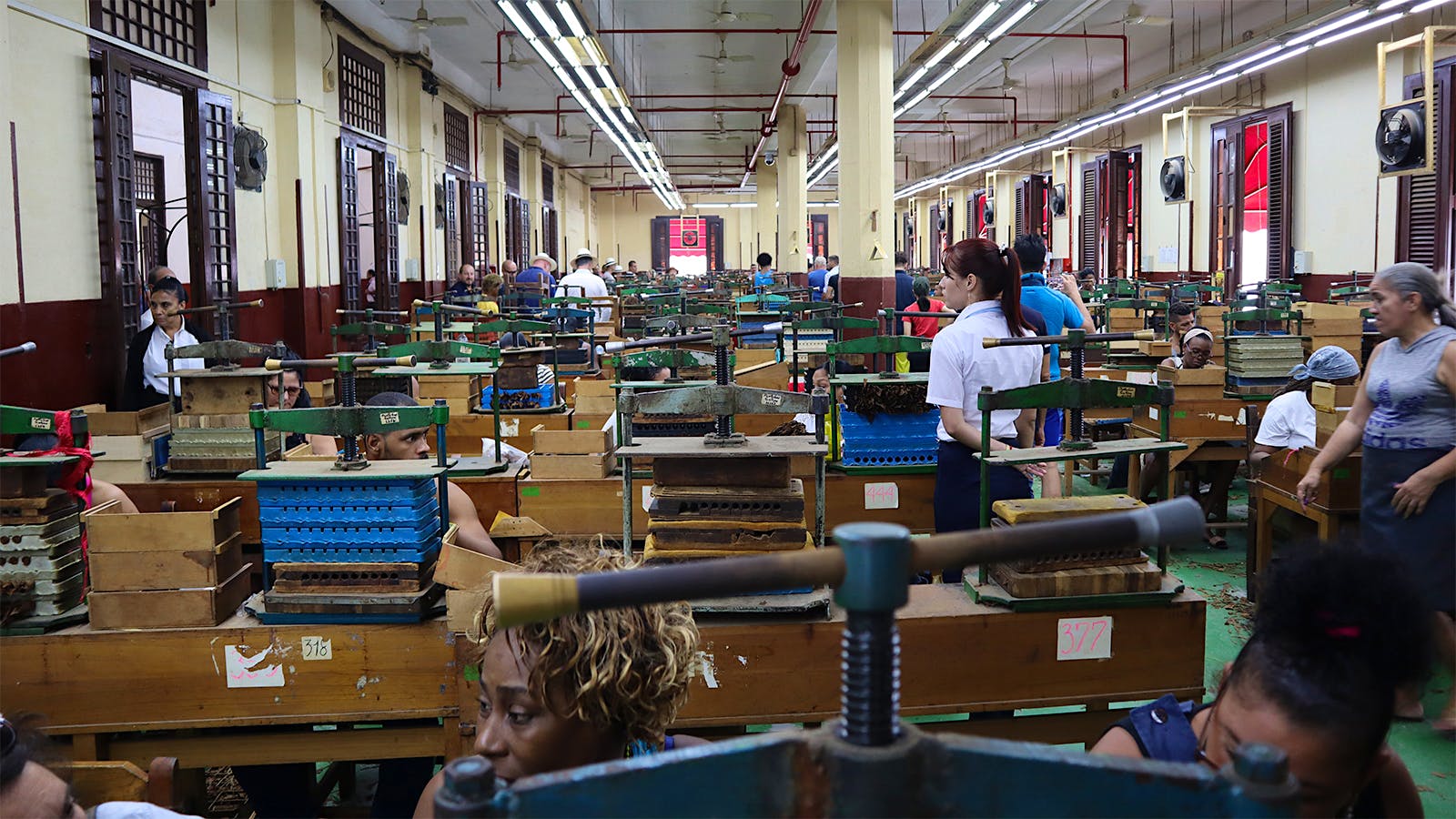 A rolling gallery on the building’s third floor where torcedores spend the entire day making brands such as Montecristo, Romeo y Julieta and, of course, Partagás. 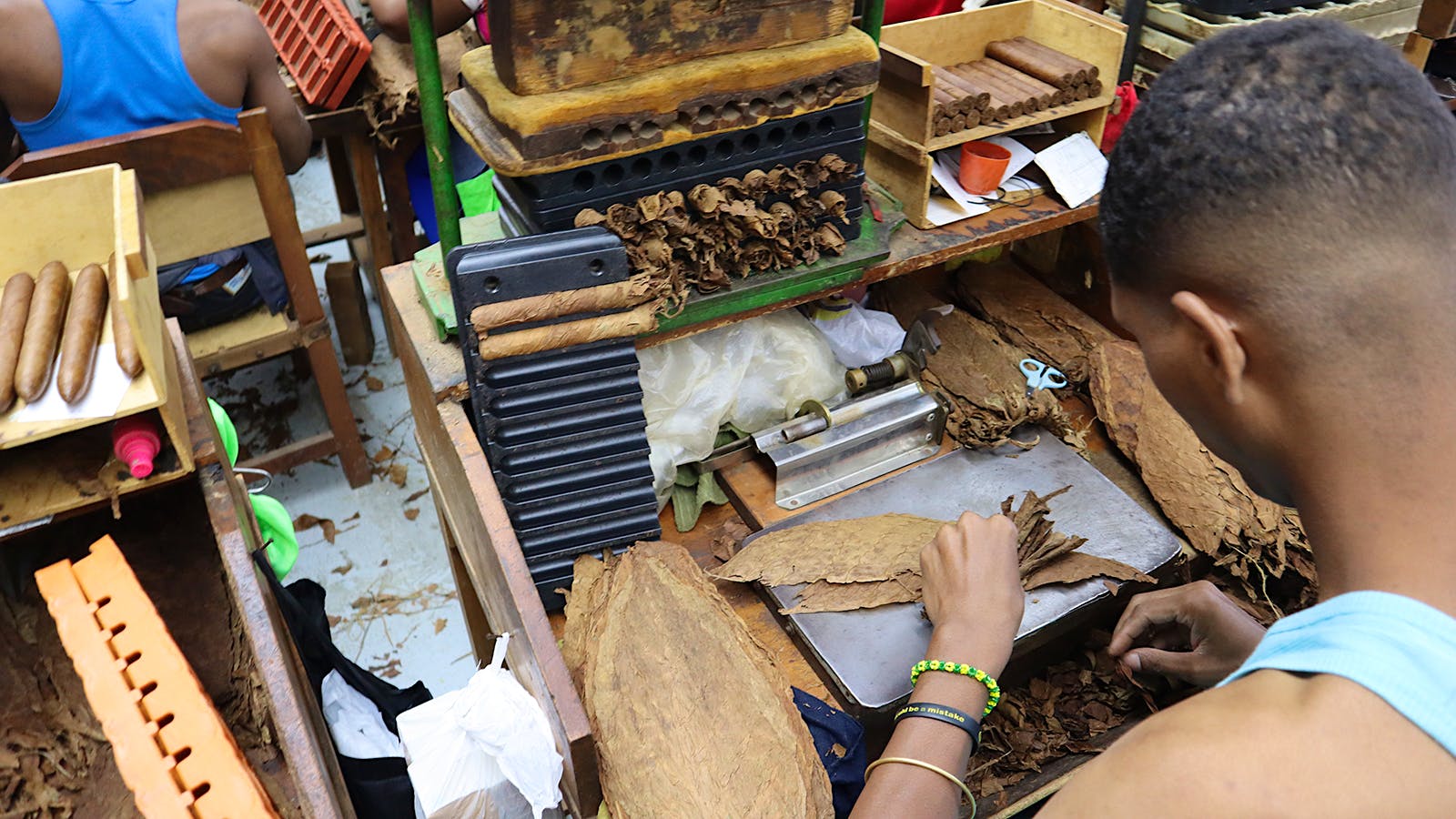 The roller forms a tobacco bunch into the shape of a cigar. See how he’s putting the filler inside two binder leaves? The double binder is a Cuban rolling method. The bunch gets its wrapper leaf after it’s taken shape in the plastic mold. 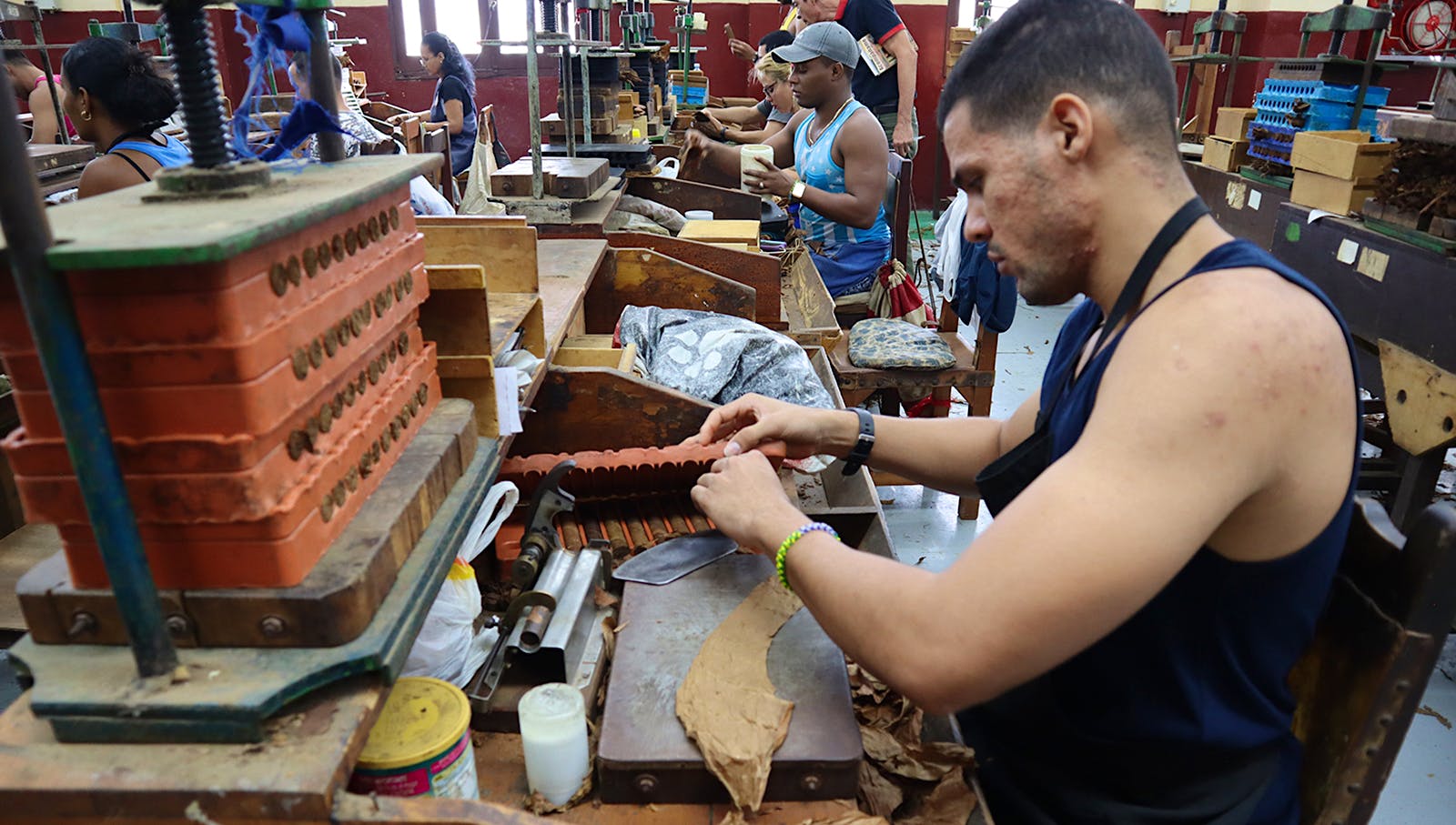 Now that the cigars have spent time in the mold, they’re ready for the wrapper. The roller here removes a well-formed cigar from a mold and will apply the wrapper leaf, which is cut to spec on the rolling surface. 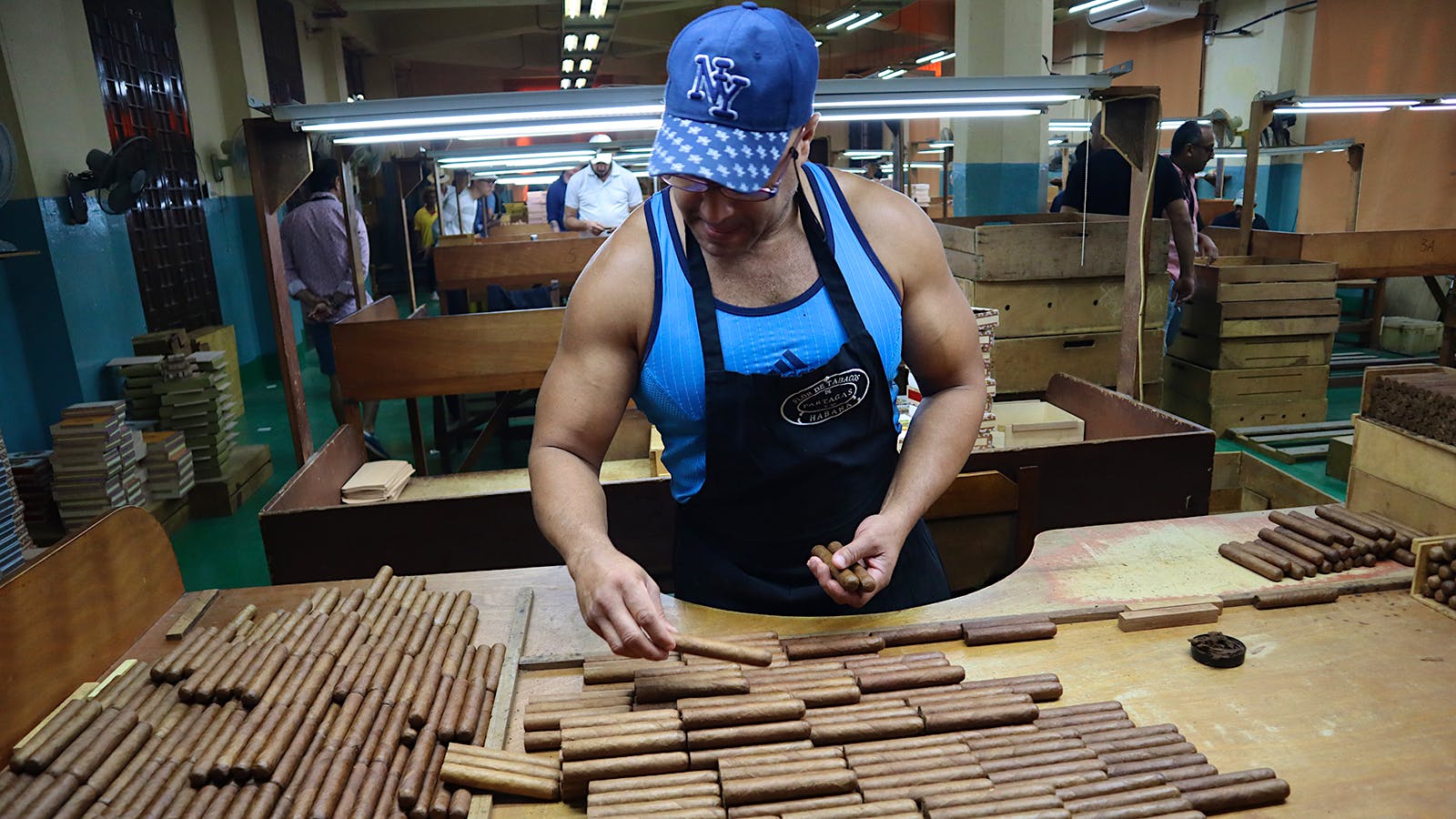 These robustos are being sorted by color to ensure that the cigars in every box are the same consistent shade. You must have good eyes for this job and the ability to discern many subtle hues of brown. 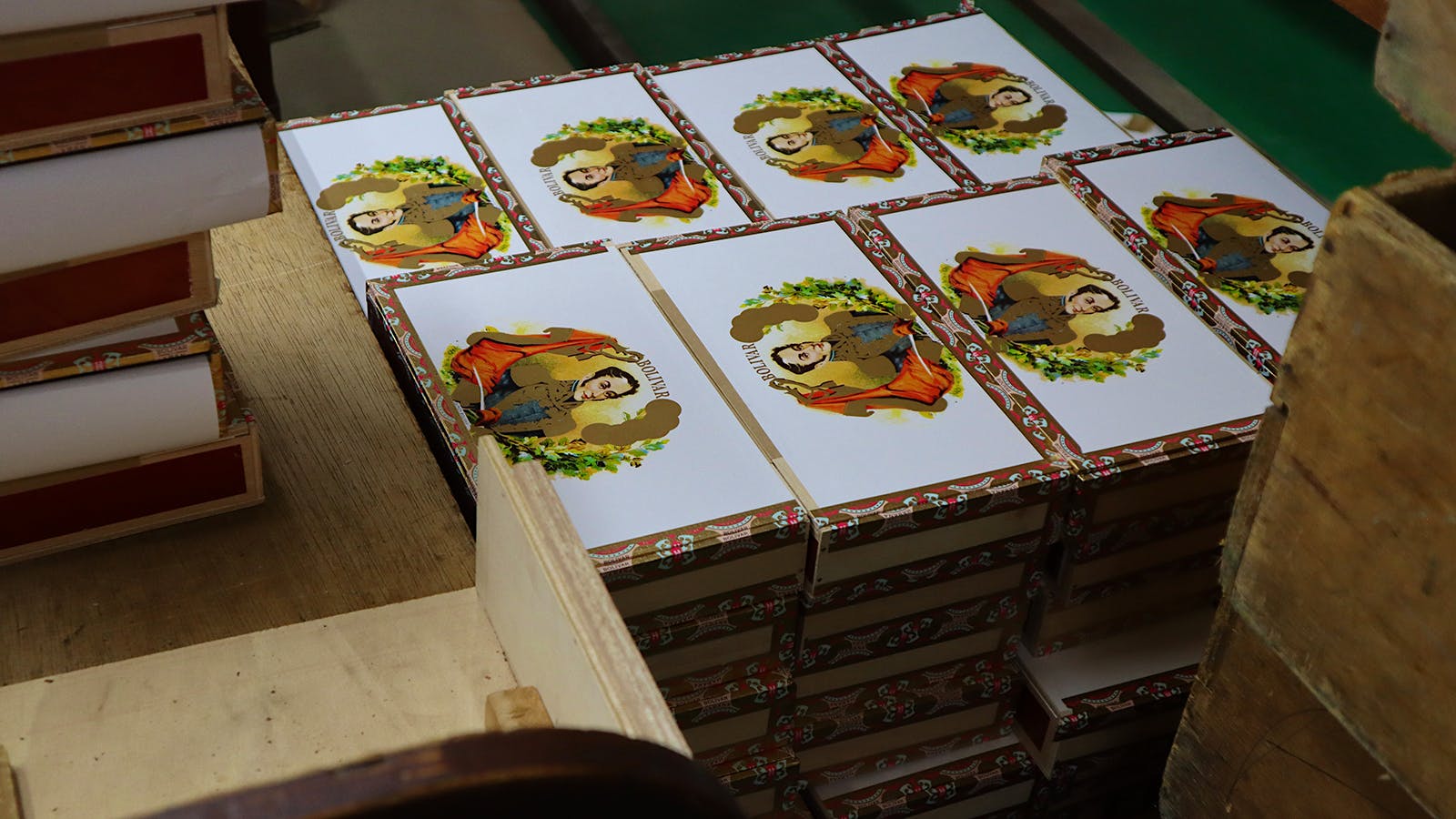 Empty boxes of Bolivar Royal Coronas aren’t quite finished yet. They still need their costeros, or side stickers, to complete the design. When finished, each box is filled with 25 cigars. 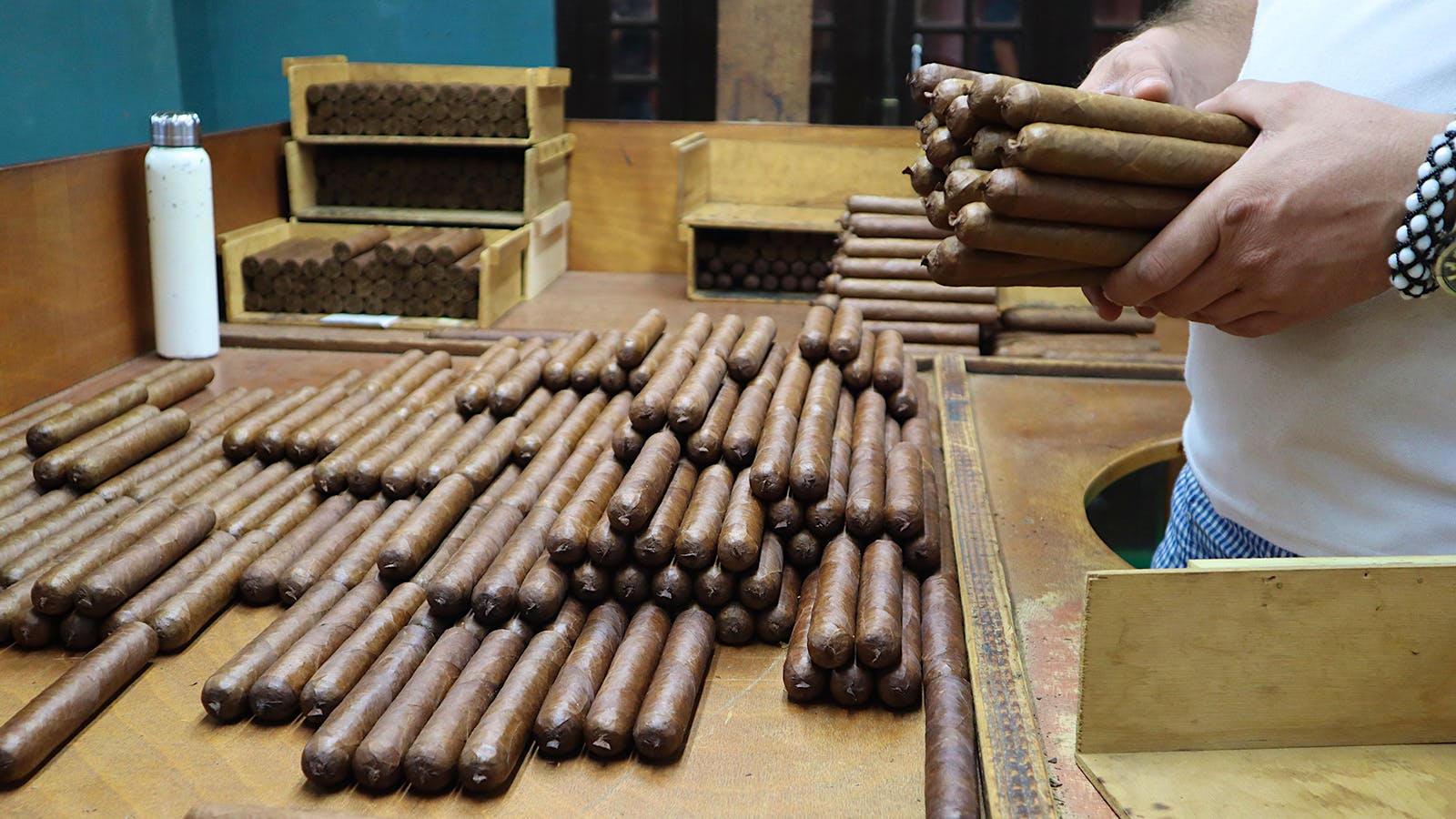 Dozens of Cohiba Talismáns on the color sorting table. Factories in Cuba have been busy producing this 2017 Edición Limitada ever since it was put back into production last year. 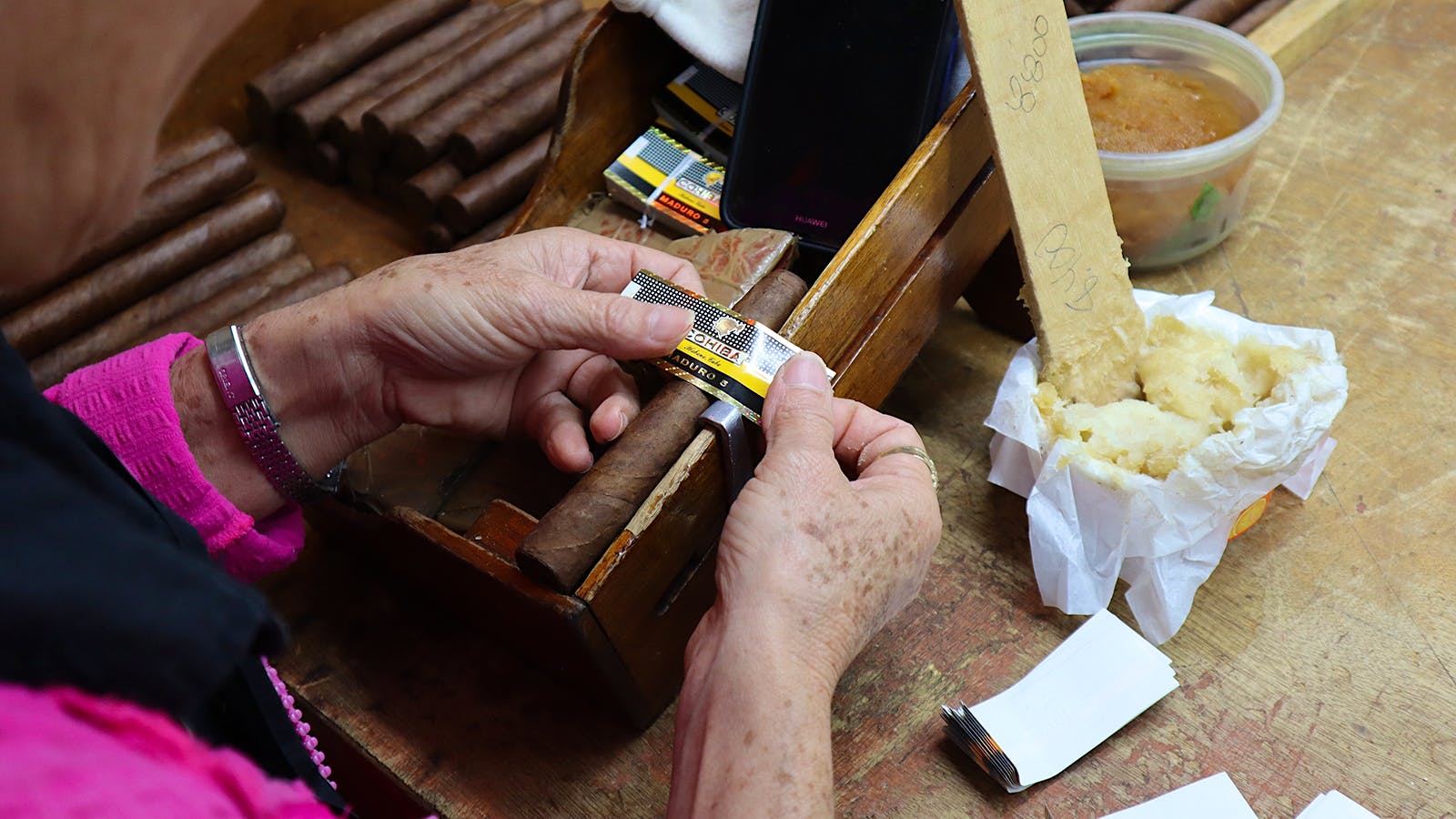 Bands are meticulously placed onto these Cohiba Maduro 5 Genios. The spacer ensures that each band is affixed at exactly the same position on the cigar every time. 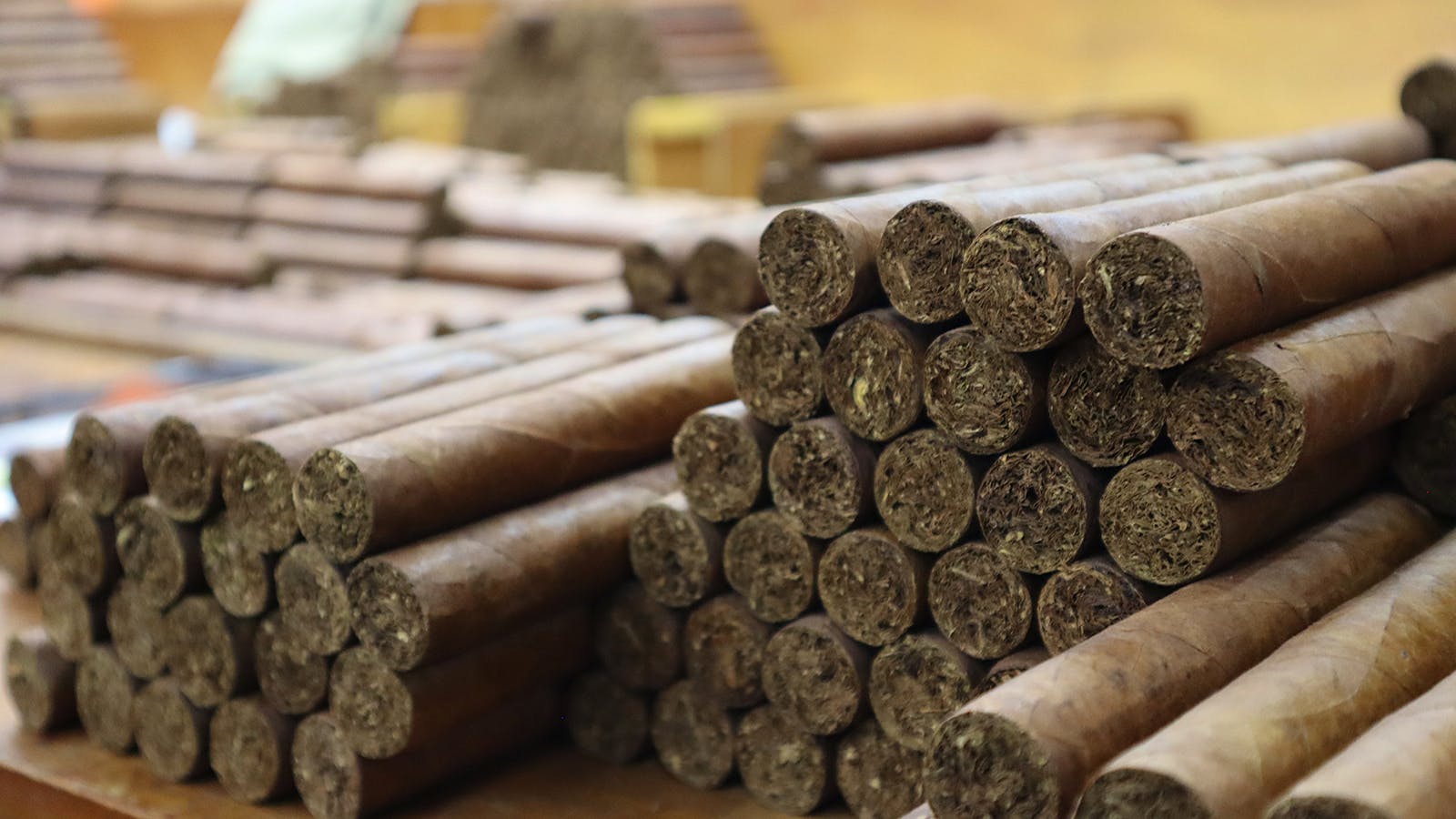 These handsome cigars have been matched and grouped by color. The next stop for these smokes is a banding station. 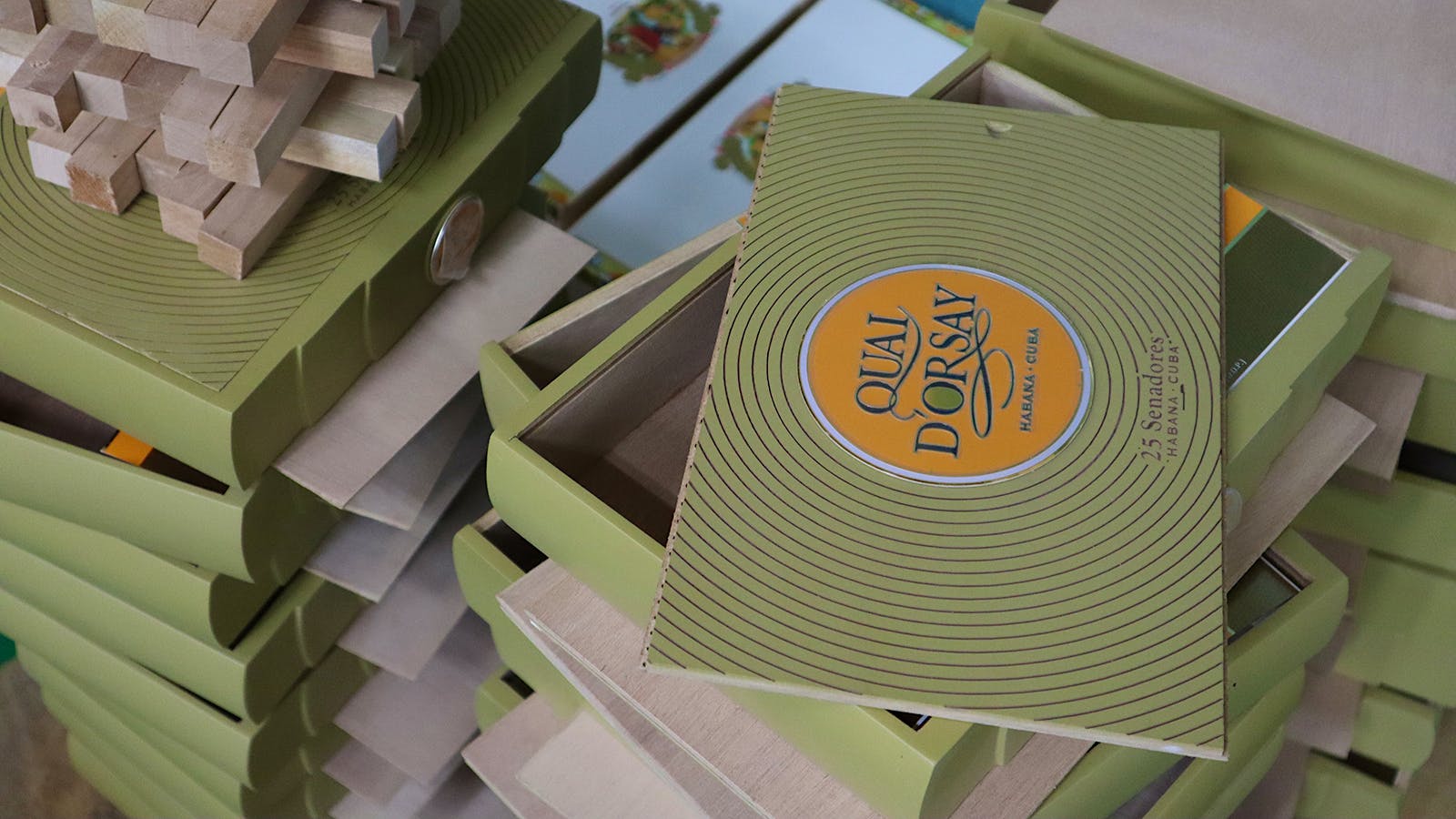 Boxes of Quai d’Orsay Senadores are stacked like Jenga blocks. It’s one of three 2019 Edición Limitadas. 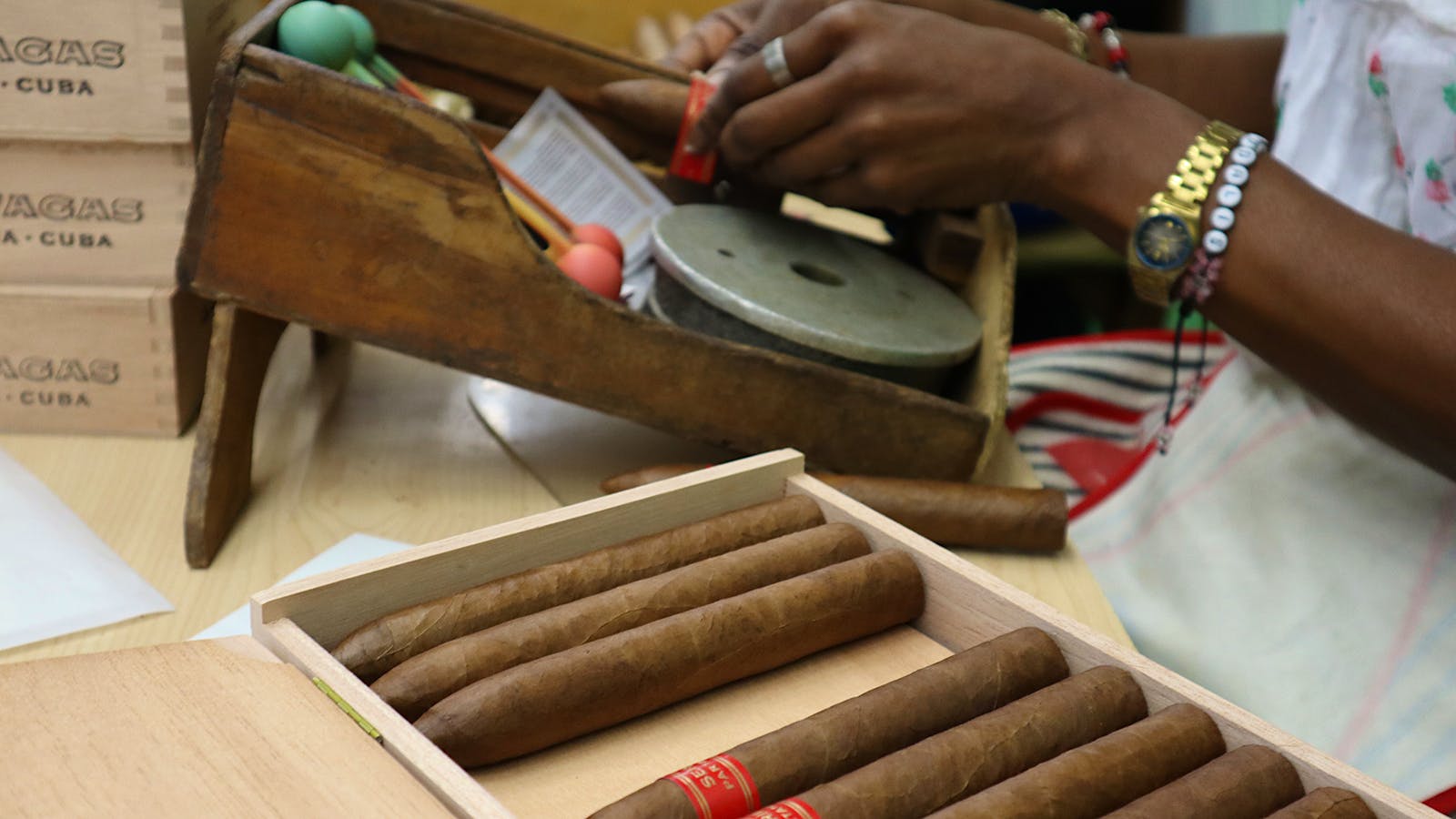 Quick and capable hands apply bands to these Partagás Serie P No. 2 pirámides. It only takes this bander a few minutes to fill a box with banded cigars, and then, onto the next. 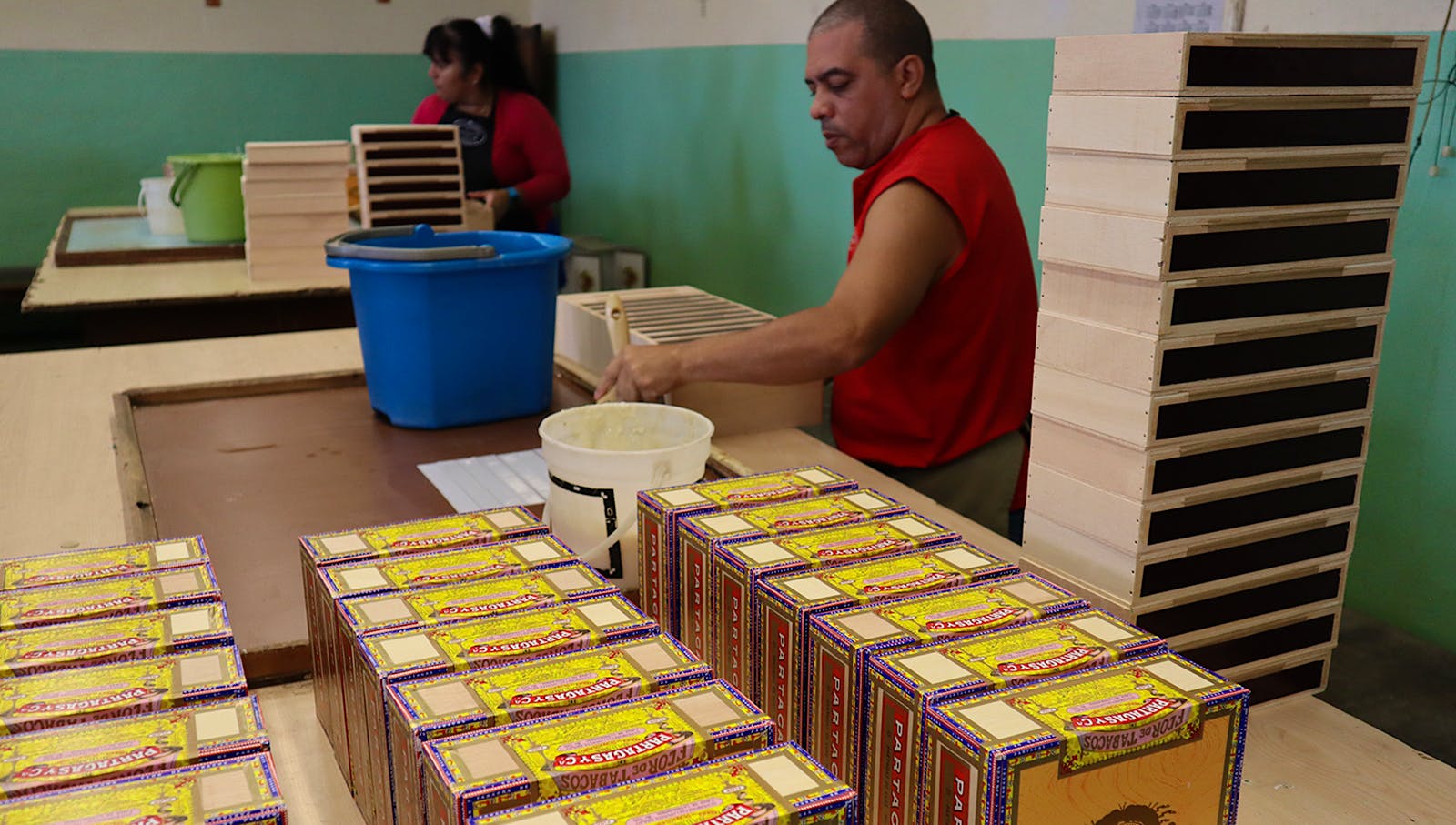 In a finishing room, this worker brushes glue onto a series of decorative labels that will cover a standard dress box. 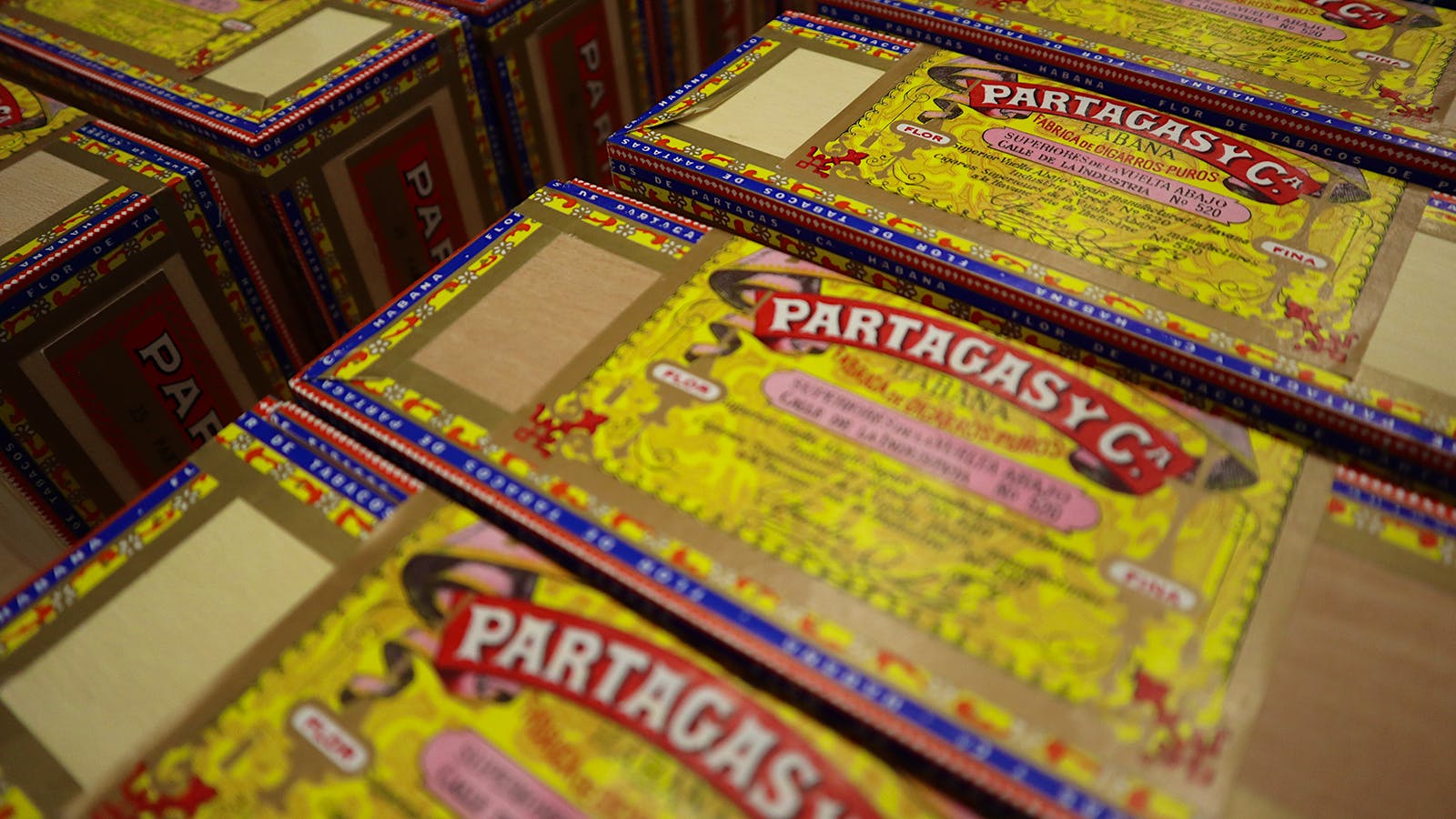 Freshly labeled dress boxes are left to dry. After they are filled with cigars they will be on their way to a cigar shop, a colorful ambassador of one of Cuba’s most famous cigar brands.
Cuba Partagas Habanos S.A.