Share
Ernesto Perez-Carrillo and daughter Lissette test smoke cigars together in their factory in the Dominican Republic.

Family businesses abound in the cigar industry, and many of the cigars we smoke are made by fathers working alongside sons or daughters. In the spirit of Father’s Day, we have created this gallery showing off some of the many father/son and father/daughter teams that are behind your favorite smokes. 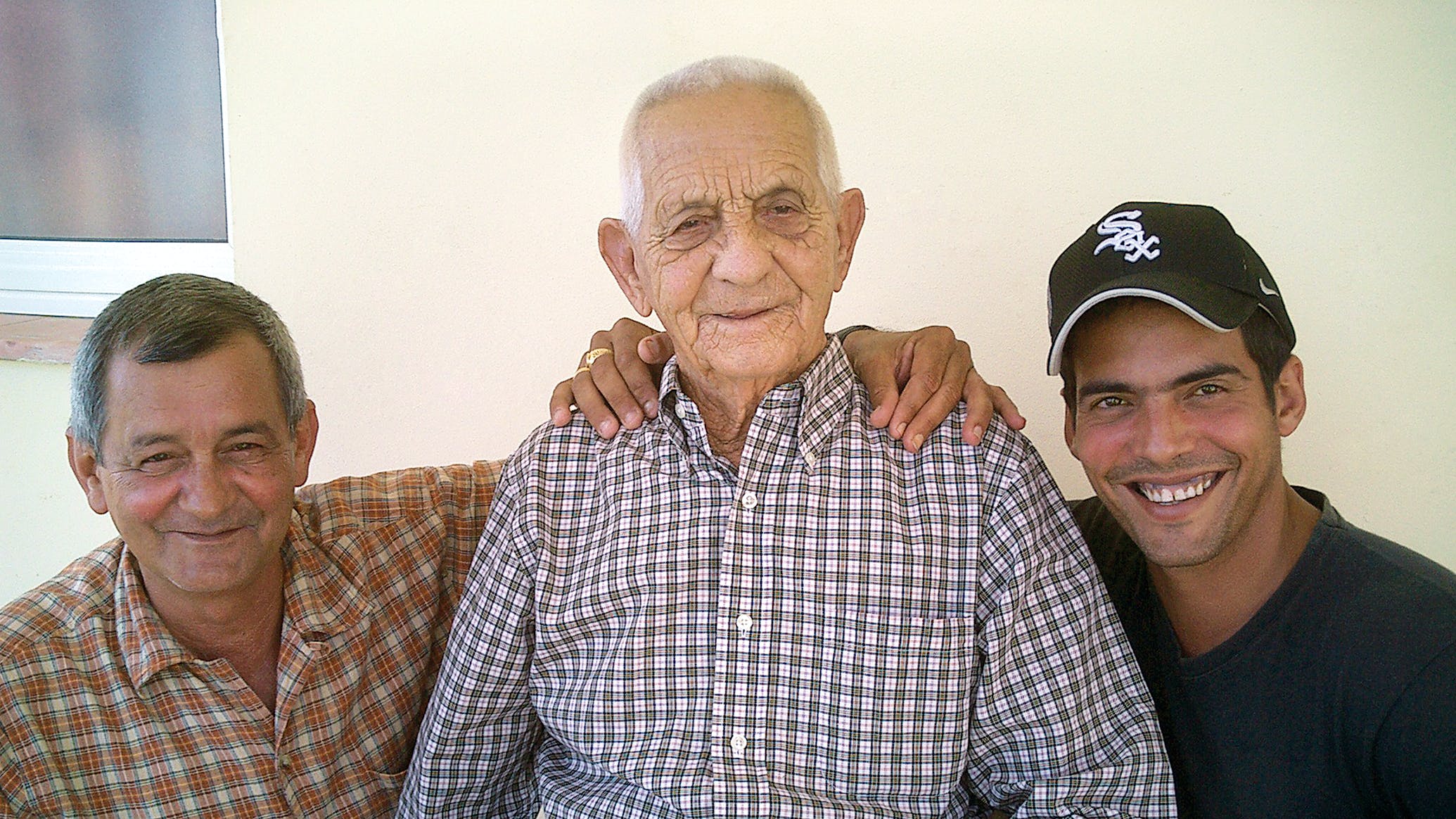 Alejandro Robaina, who died in 2010, is widely considered one of the most talented men to ever grow tobacco in Cuba. His son Carlos (left) sells cigars in Havana, at La Casa del Habano Quinta Avenida, while his grandson Hirochi (right) now runs the family farm, Cuchillas de Barbacoa in San Luís, Cuba. 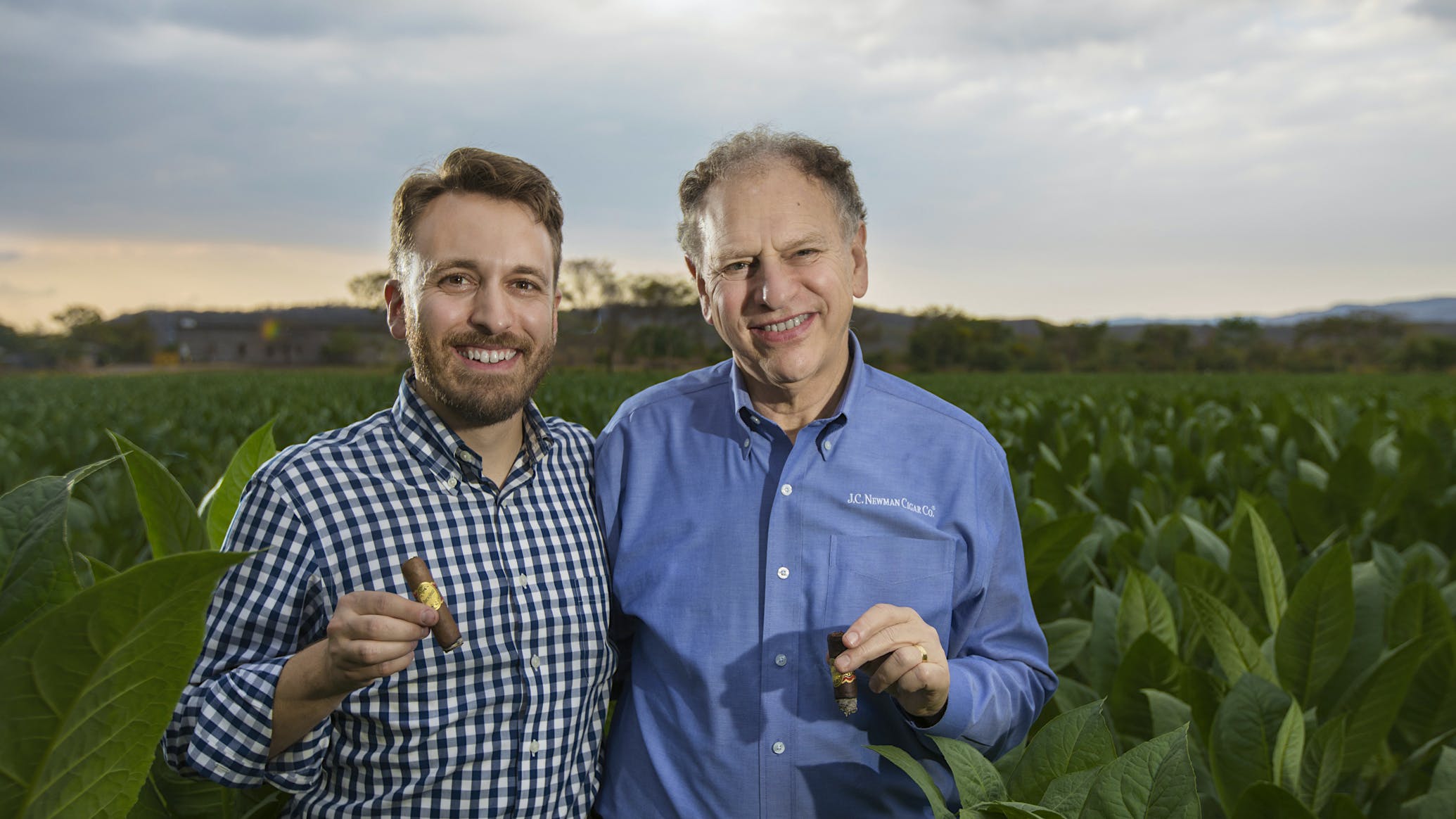 Fourth generation cigar man Drew Newman (left), standing in a field of Nicaraguan tobacco with his father Eric. They are continuing the J.C. Newman story, which began back in 1895 when Drew’s great grandfather began making cigars in Cleveland, Ohio. 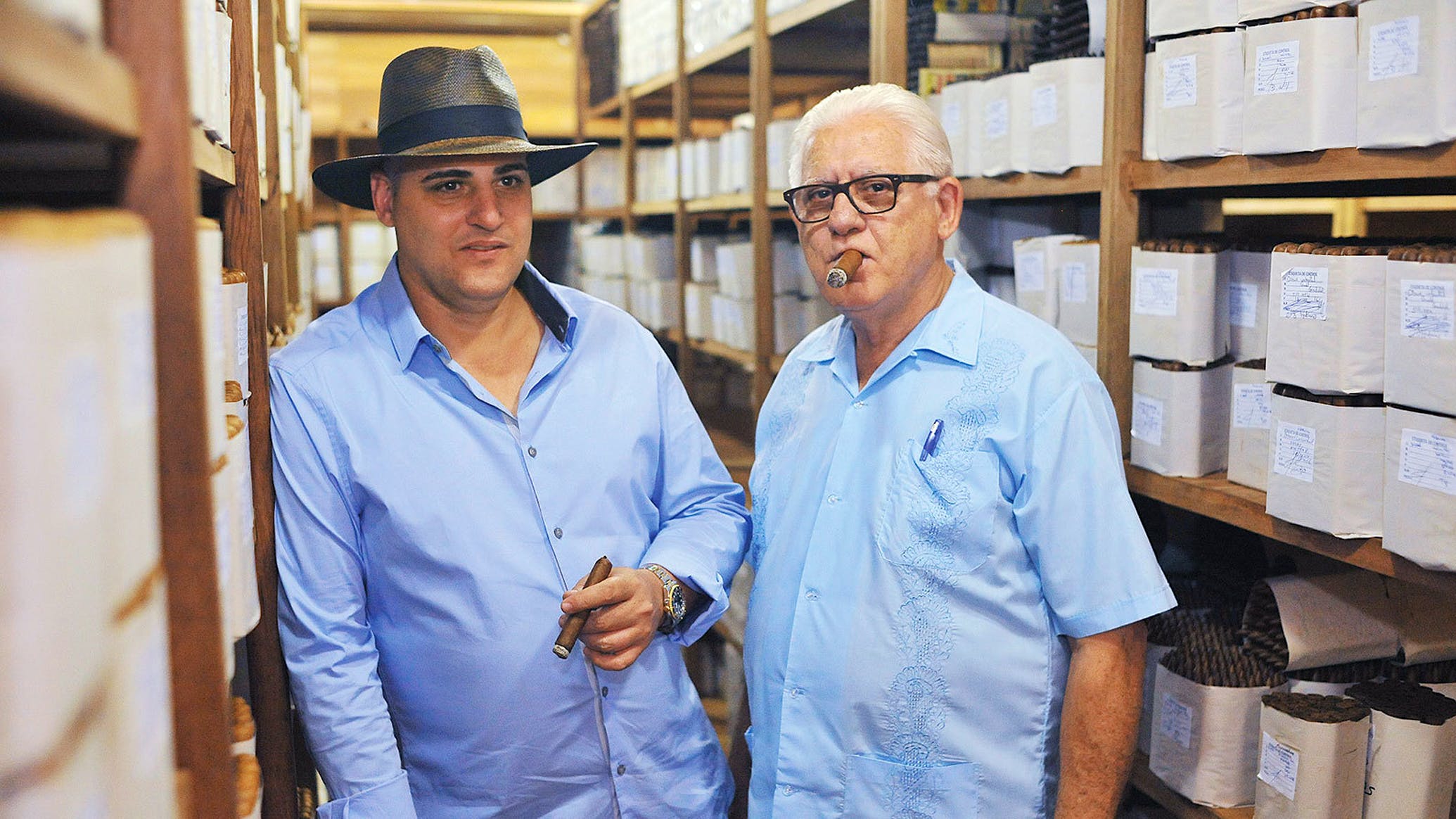 The operations at A.J. Fernandez are growing rapidly, but A.J. can’t do everything alone. His father, Ismael, is always on hand offering wisdom and advice that only comes with years of experience. (Photos/Richard Leonardi) 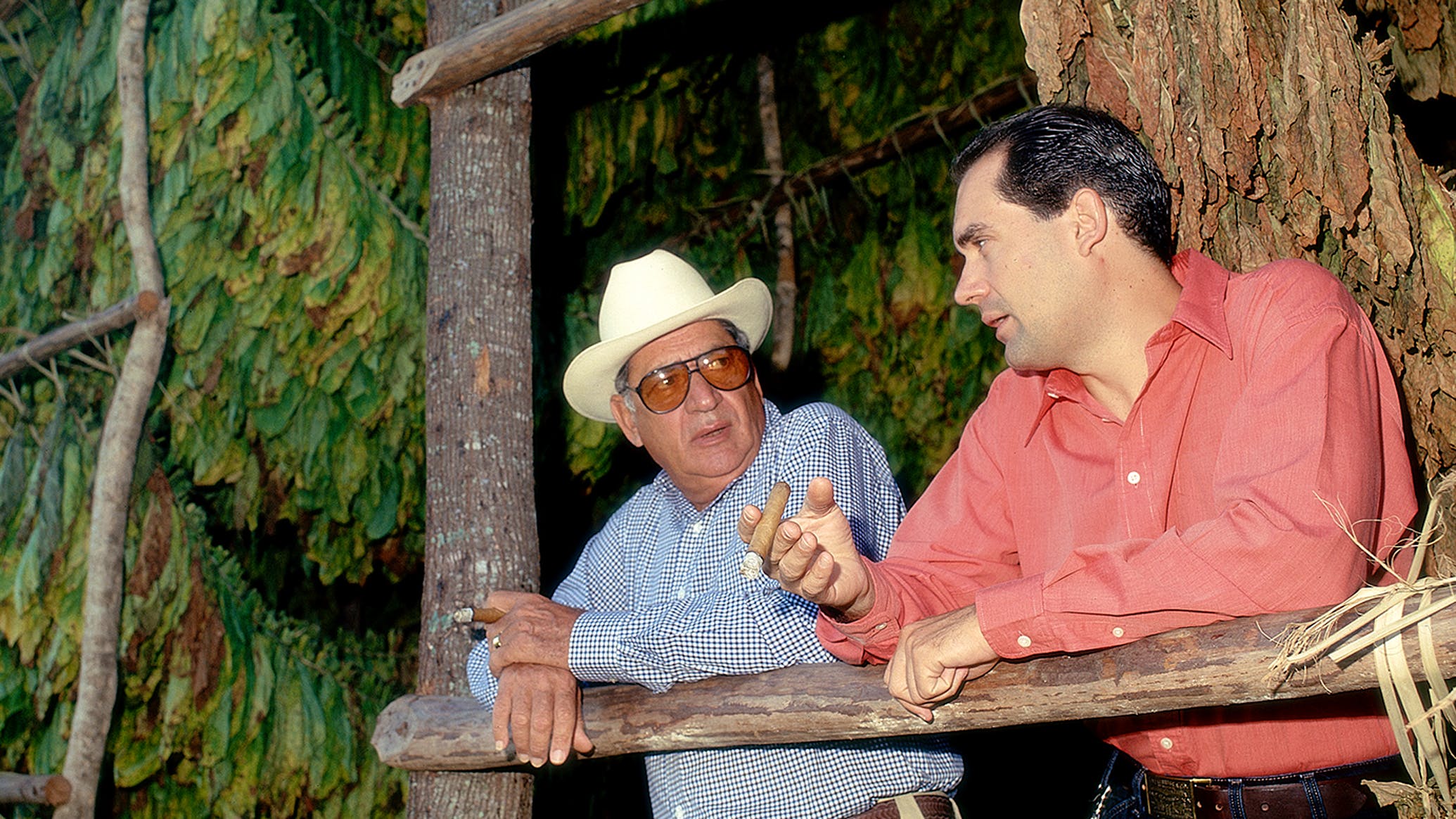 La Aurora is the oldest maker of cigars in the Dominican Republic, founded in 1903 by Eduardo León Jimenes. His role was taken over by his son, Fernando León Asensio (left), who died in 2009. Today Fernando's son Guillermo (right) follows in the footsteps of those who came before him, overseeing production of La Aurora cigars. 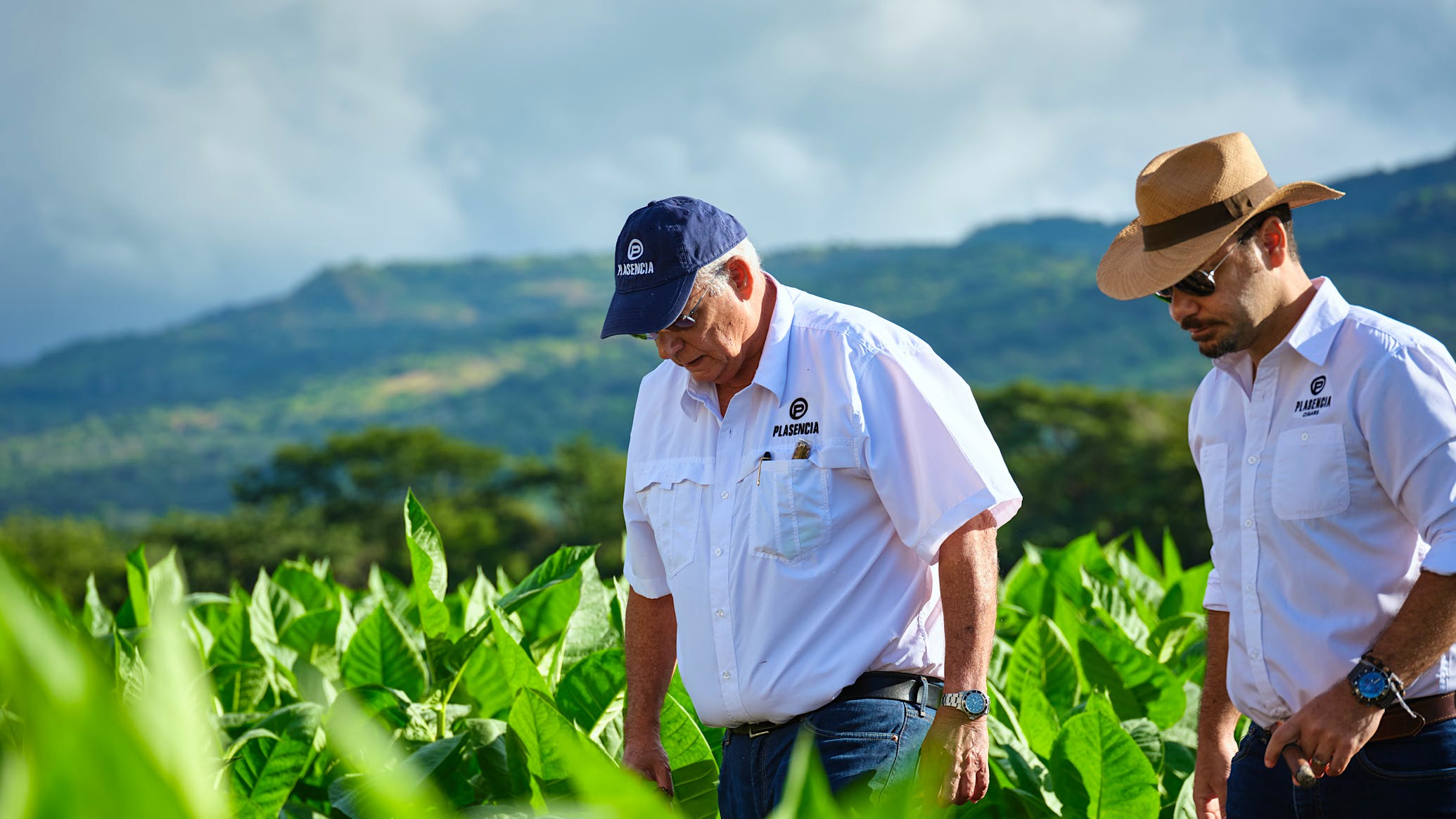 Few, if any, have as vast a tobacco leaf library as the Plasencia family. Nestor Plasencia and his son, Nestor Andrés grow mostly in Nicaragua and Honduras, but they make cigars under contract for many clients, as well as producing great cigars of their own. 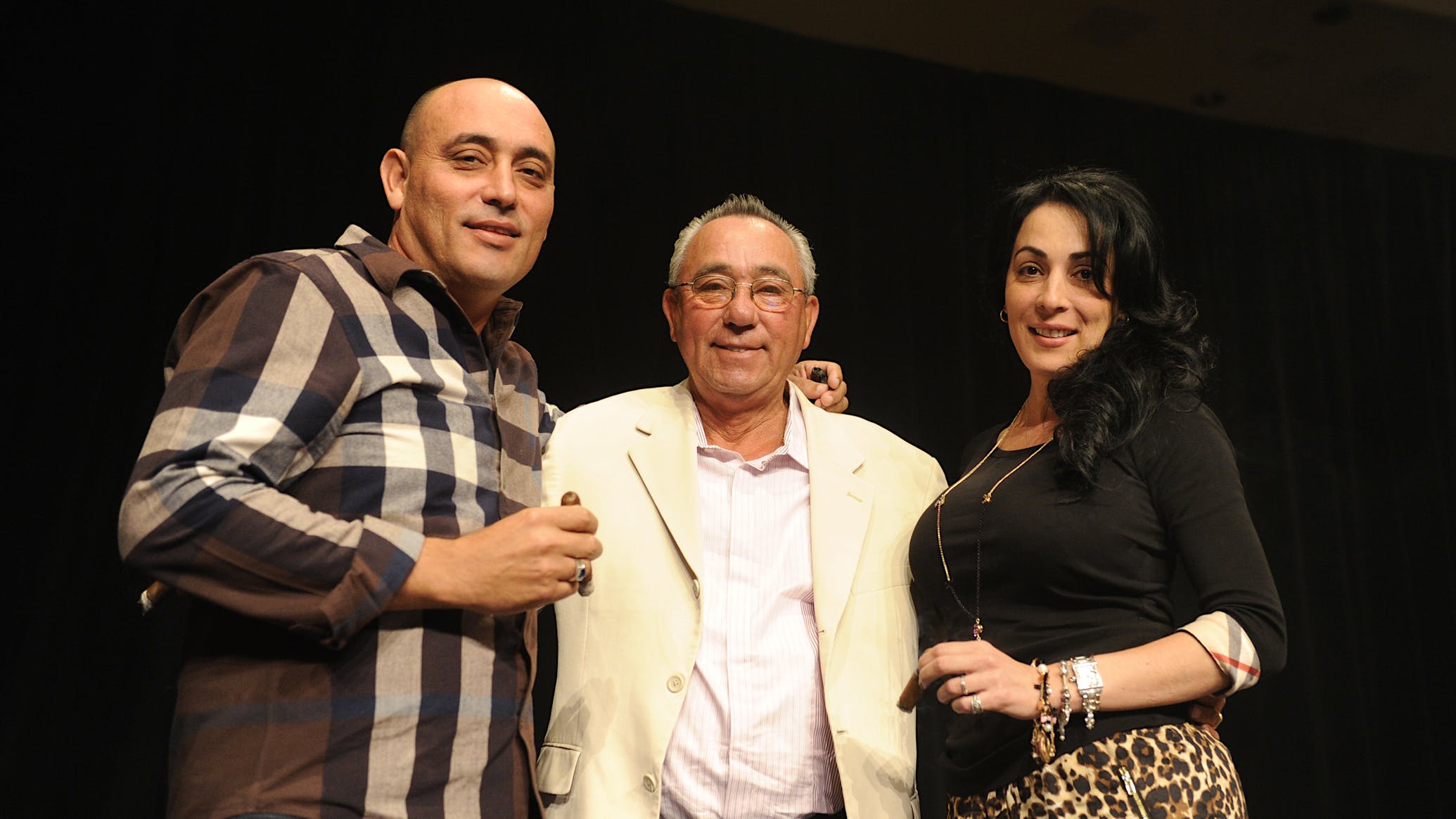 It’s hard to believe the Garcias started in a tiny space in Miami during the early 2000s. The family has expanded massively since those days, and occupies a large footprint in Nicaragua that includes a formidable factory and fields of tobacco. José “Pepin” Garcia couldn’t have done it without his son, Jaime and daughter Janny. (Photo/David Becker via Getty Images) 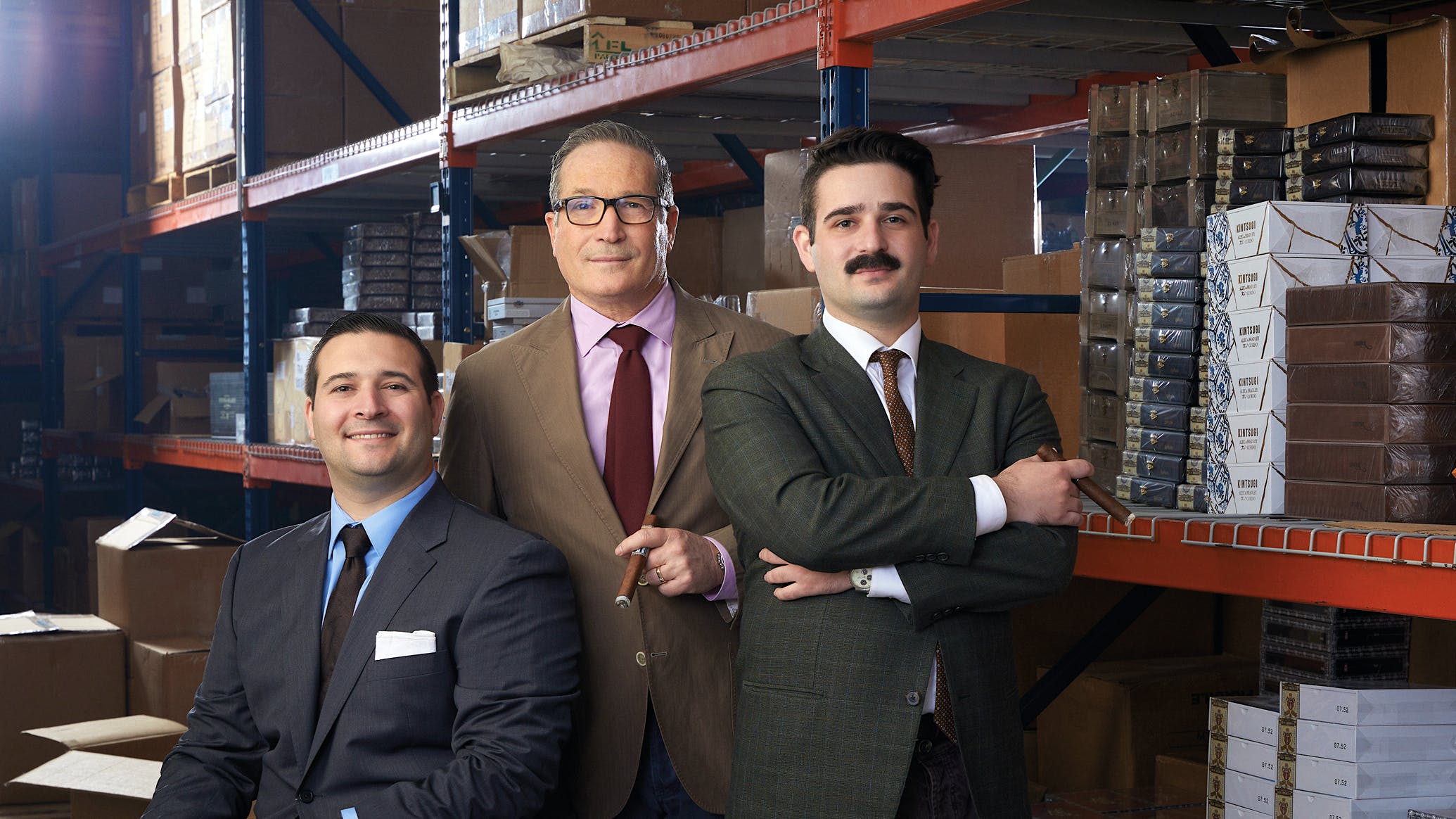 Twenty-five years ago, Alan Rubin started the Alec Bradley Cigar Co. which he named after his two sons. Today, Alec (left) and Bradley (right) are an important part of the business, working at Alan’s side to absorb all the expertise they can and make it their own. (Photo/Jeffery Salter/Redux Pictures) 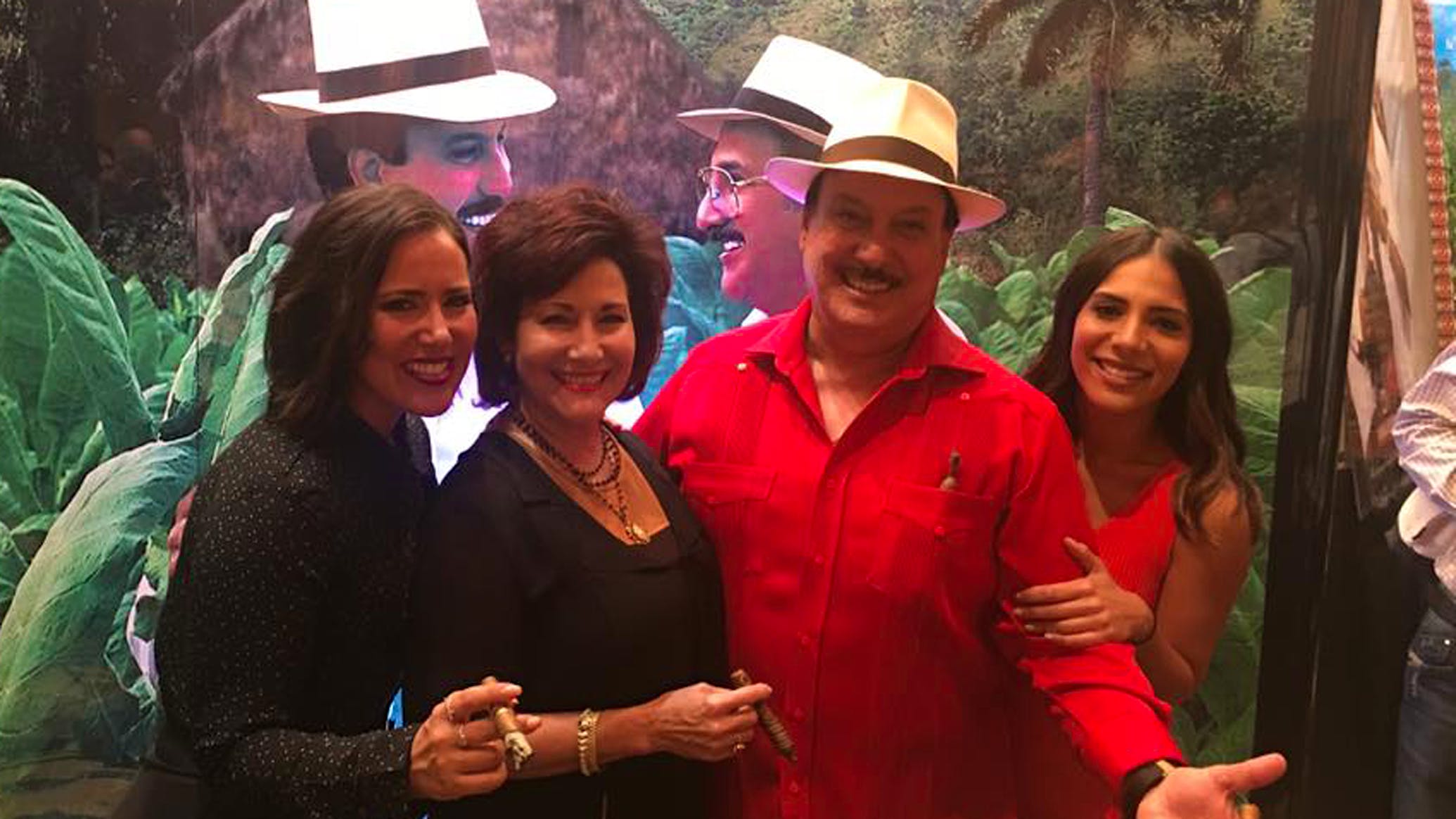 Cigars have been made under the Fuente name since 1912, when Arturo Fuente began rolling cigars in Key West, Florida. Today, the company is run by Carlos Fuente Jr. (in red). Here he is at a Big Smoke with his daughters Liana (far left), Lidiana (far right) and his sister Cynthia, and all are involved in the family business. 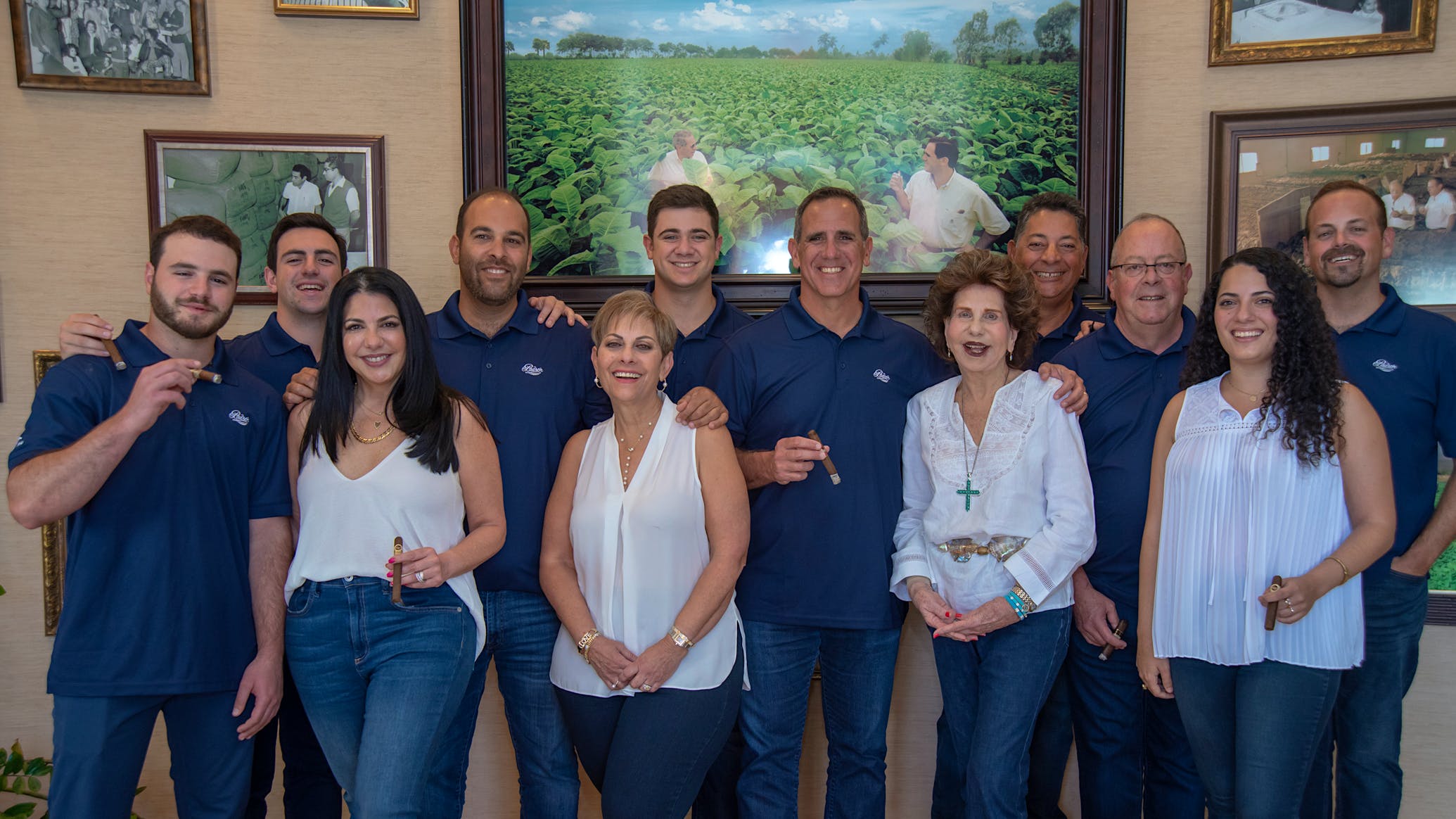 Making Padrón cigars has been a family business since 1964. If you buy one of the company’s cigars, it’s almost assured that someone with the last name Padrón had a hand in getting it to your favorite cigar shop. In the Miami headquarters, there are fathers and sons and fathers and daughters: from left: Andres Martinez-Padrón, Alfonso Martinez-Padrón, Lisette Padrón, Marcos Soto Padrón, Elizabeth Padrón, Jorge Luis Padrón Jr., Jorge Padrón, Flory Padrón, Rodolfo Padrón, Orlando Padrón, Kimberly Padrón and Jeffrey Padrón. (Photo/Miranda) 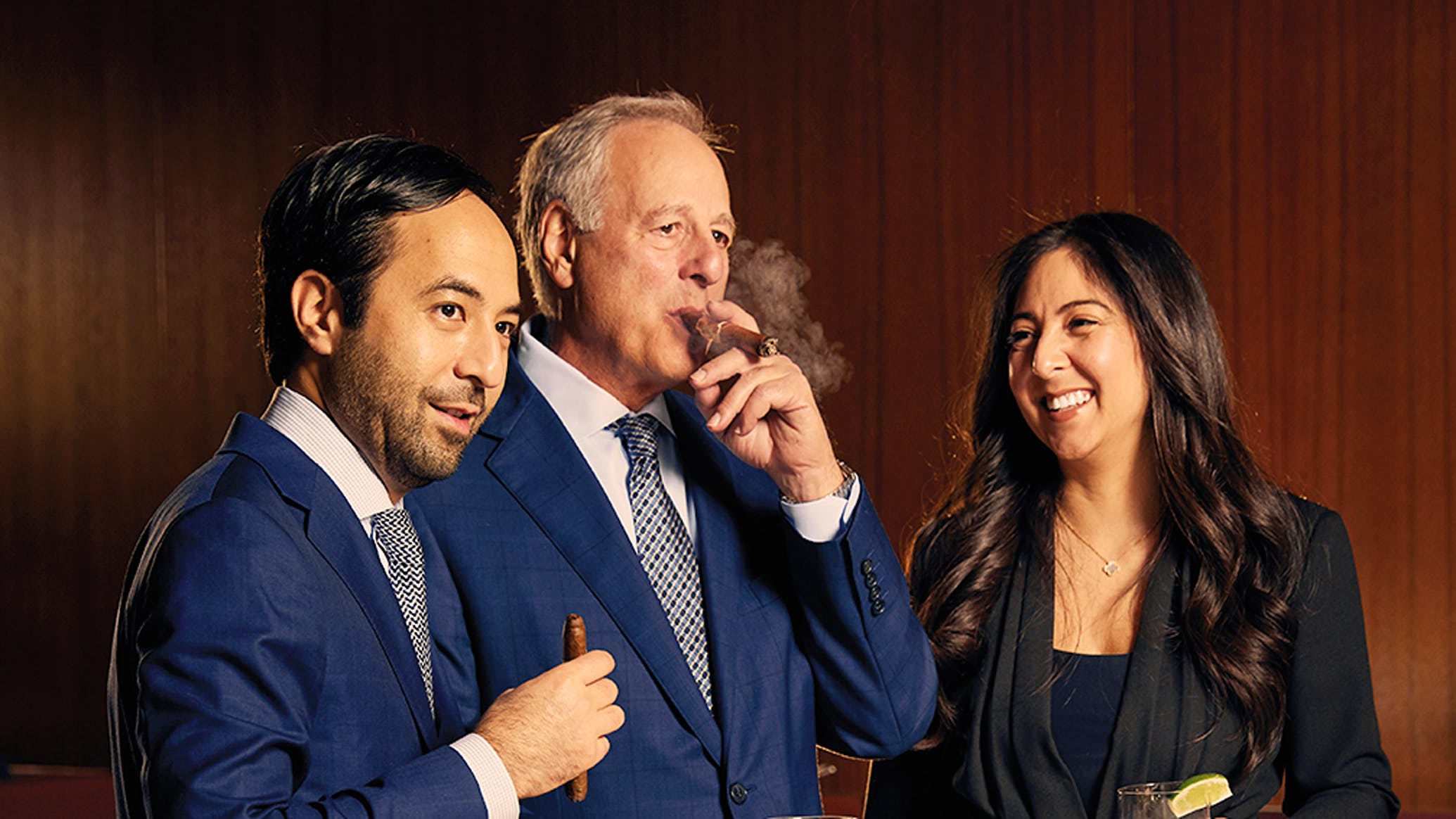 The family that has a cigar together stays together. Robert Levin of Ashton Distributors Inc. enjoys a great cigar with his son Sathya and daughter Meera in their Ashton Cigar Bar in Philadelphia. (Photo/Peter Garritano) 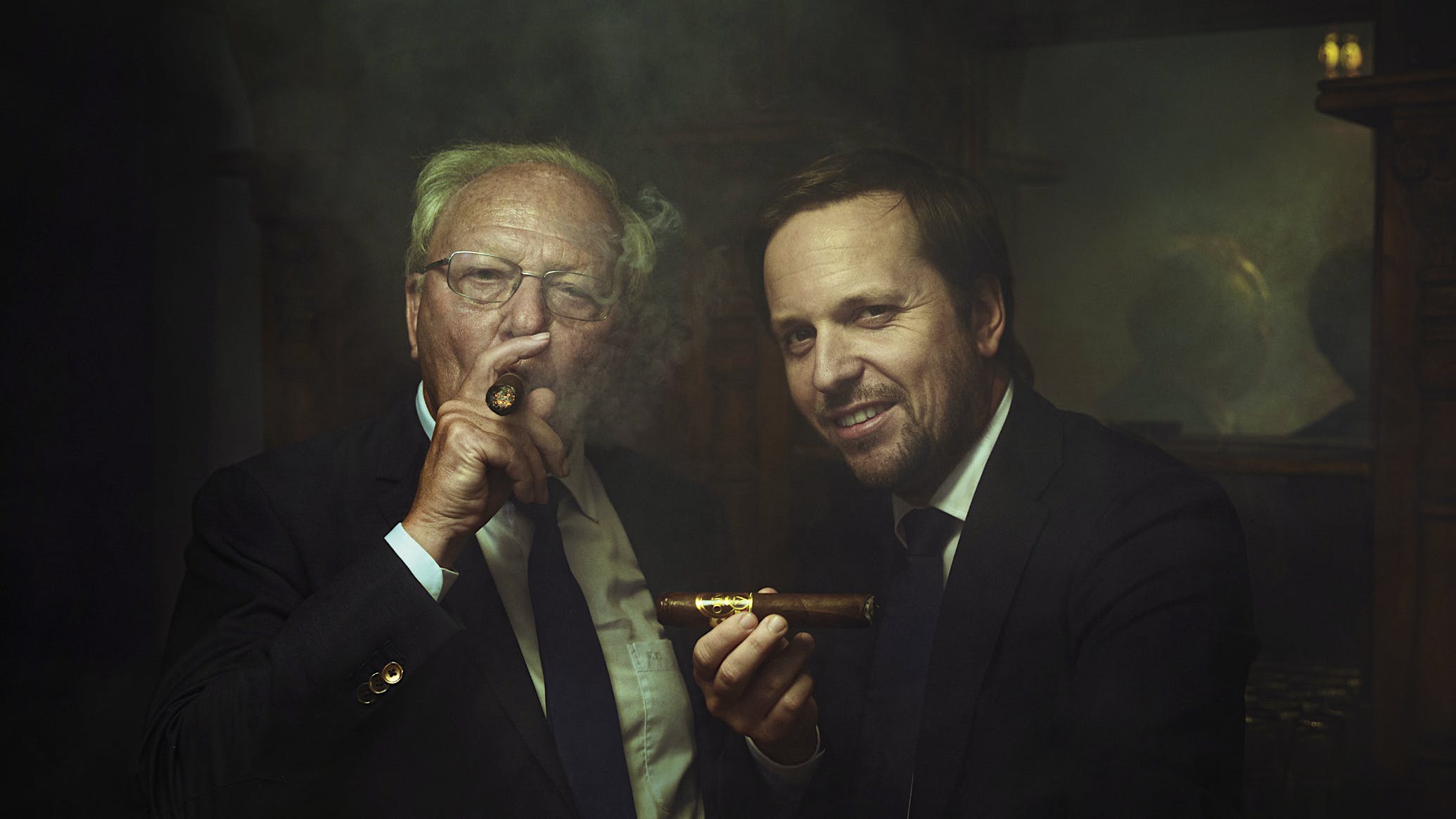 J. Cortès of Belgium has been in the cigar business since 1926, when Maurits Vandermarliere started making cigars in the attic above his cigar shop. His youngest son Guido (left) joined the business in 1965, and today, Guido’s son Frederik (right) continue the tradition. J. Cortès is the owner of Oliva Cigar Co. 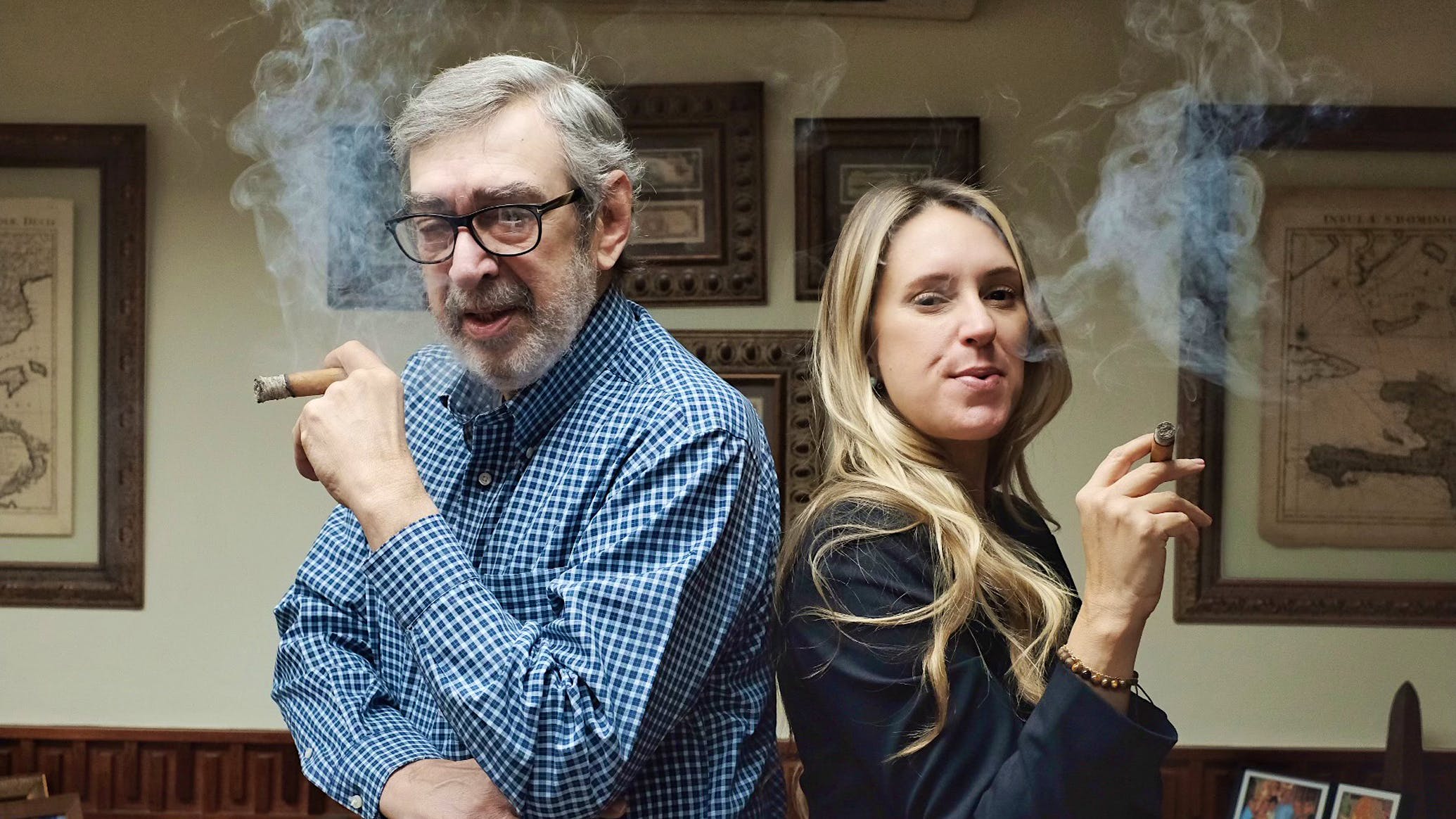 Manuel “Manolo” Quesada, of Quesada Cigars, conducting some smoky research and development with his daughter Racquel in Licey, Dominican Republic. 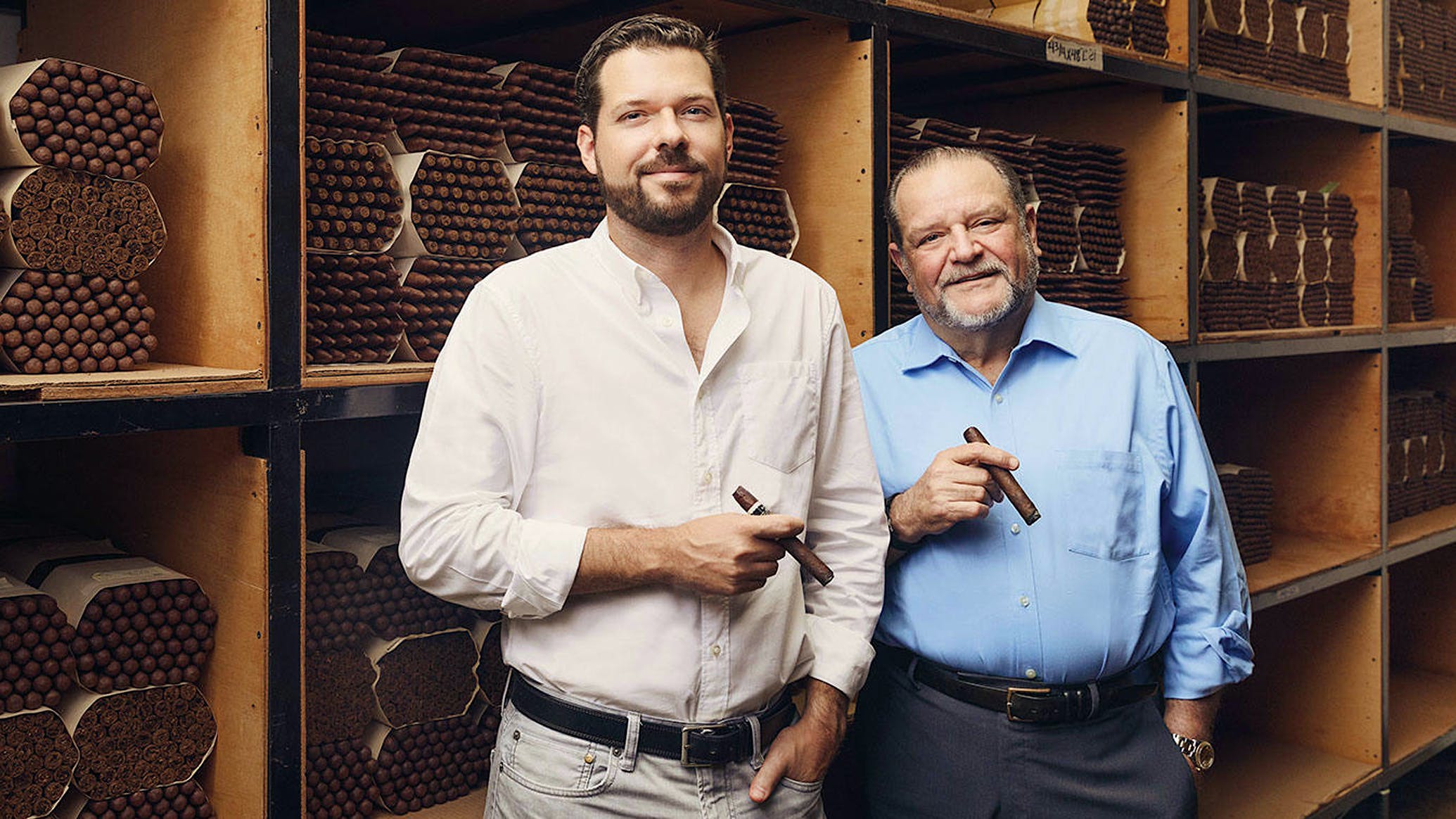 Joya de Nicaragua is in the capable hands of Dr. Alejandro Martínez Cuenca and his son, Juan Ignacio Martínez, who are both ensuring that Nicaragua’s oldest producer of handmade cigars is as important now as it was 50 years ago. (Photo/Peter Garritano) 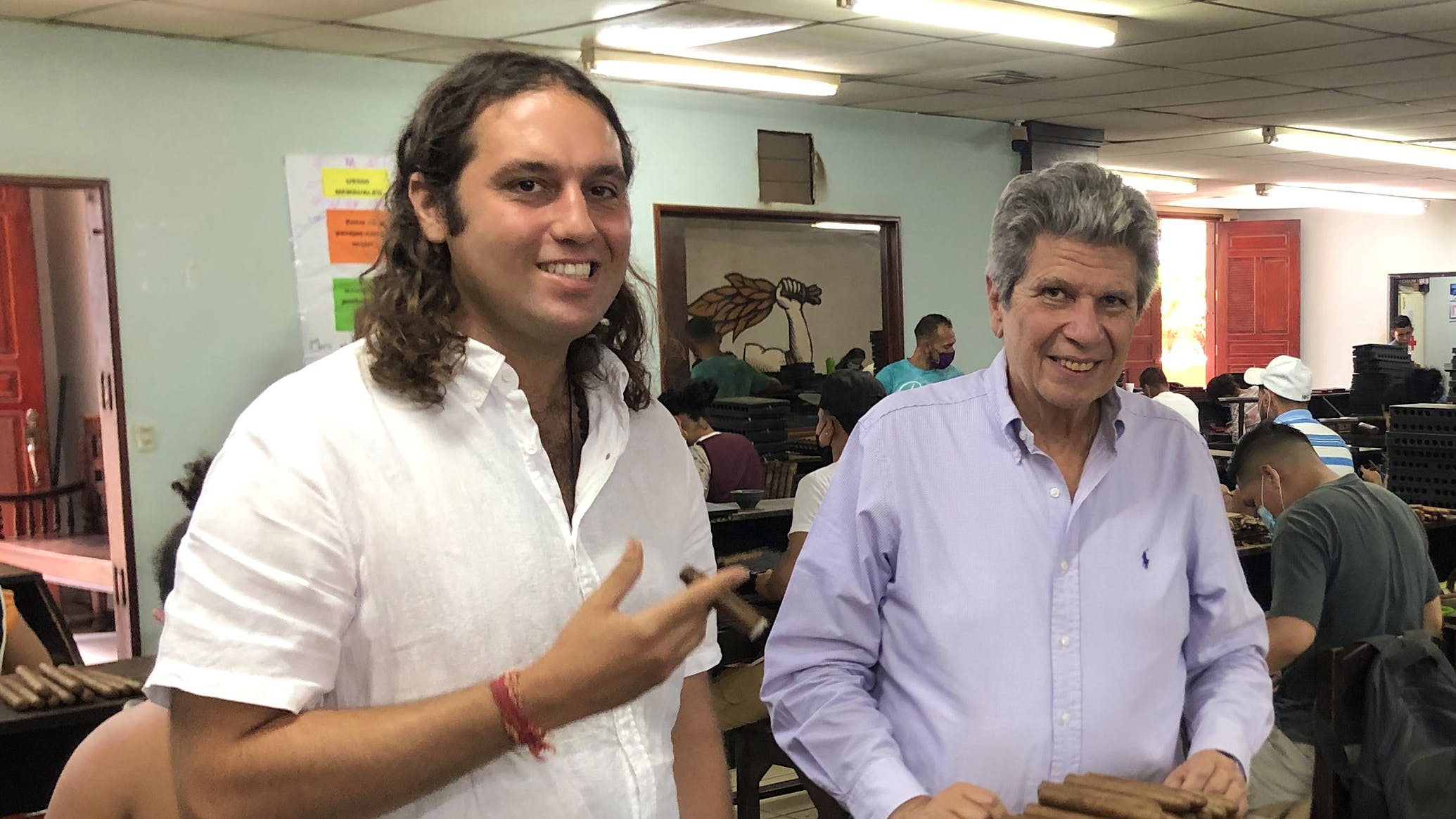 In addition to their massive Aganorsa tobacco-growing operation in Nicaragua, father-and-son Eduardo and Max Fernandez also oversee their Aganorsa Leaf factory, which produces some stellar smokes. 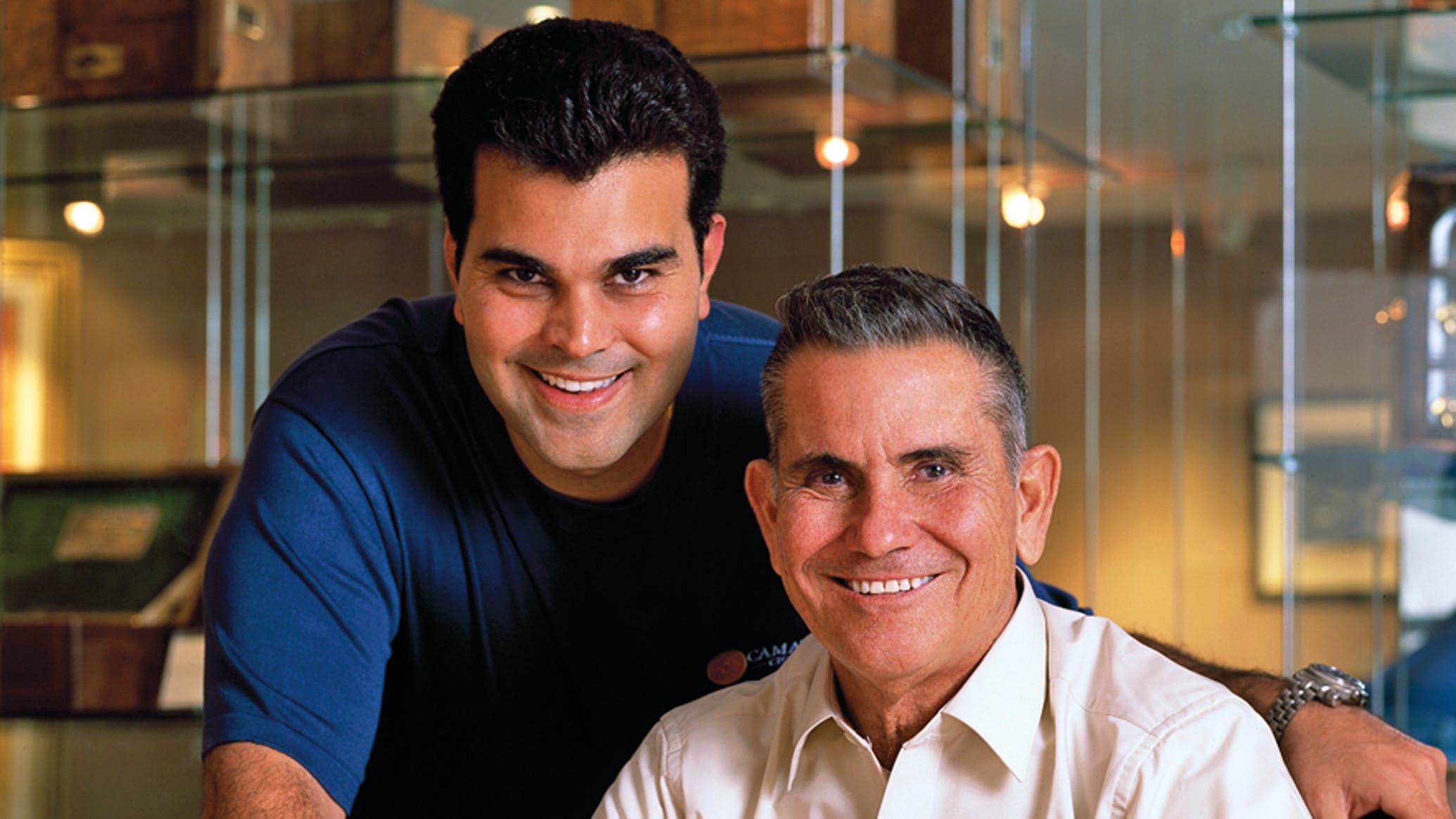 Honduran Corojo-seed tobacco has never tasted better, thanks to Julio Eiroa and his son, Christian, who cultivate the leaf in the Jamastran Valley. They make great Honduran cigars as well, helping to keep the Central American country on the cigar map. (Photo/Carina Salvi) 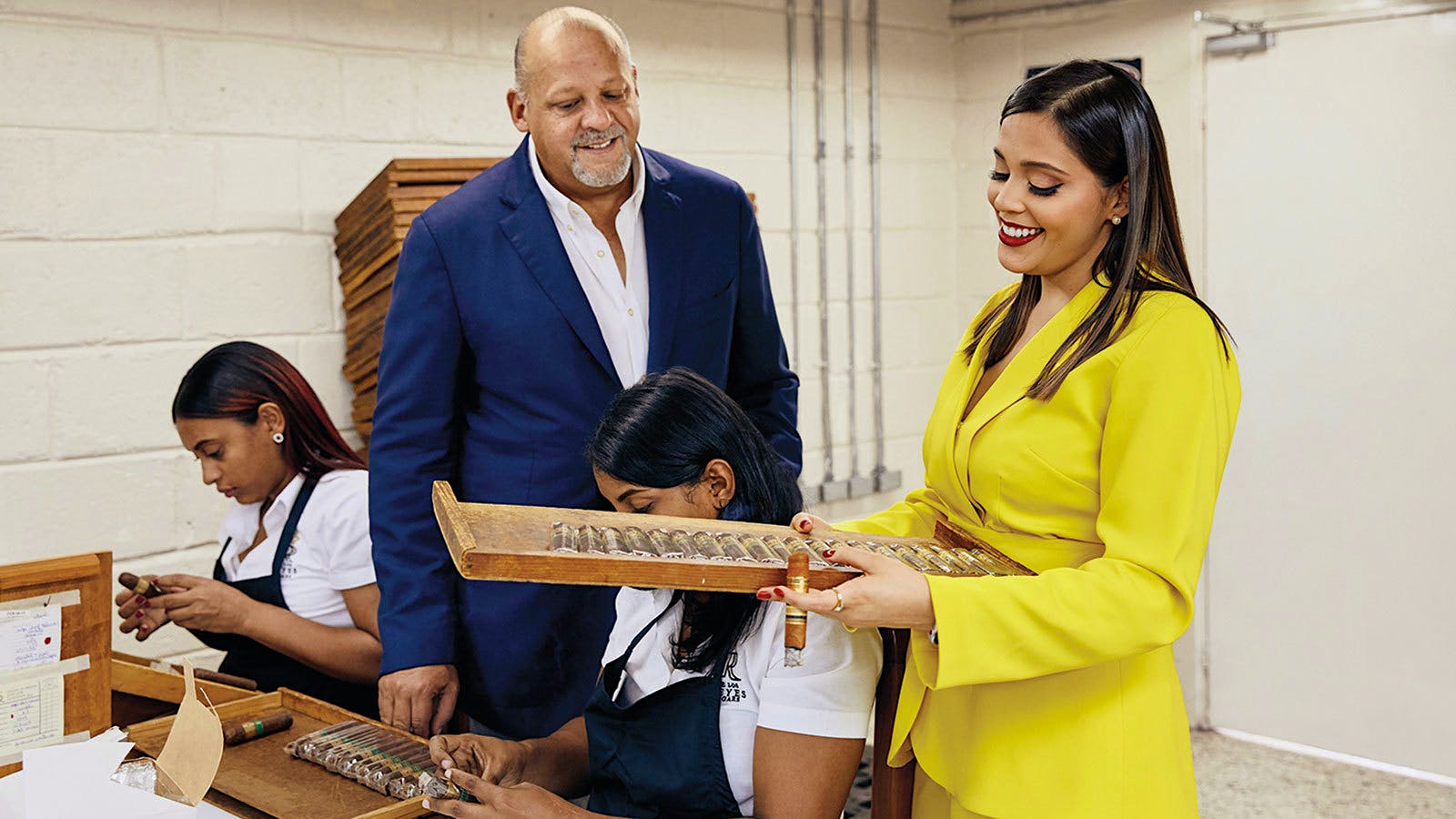 What a vote of confidence! Augusto Reyes handed over the reins of his factory in the Dominican Republic to his daughter, Nirka. Now, she’s the boss of De Los Reyes Cigars, but still turns to her dad for valuable advice. (Photo/Peter Garritano) 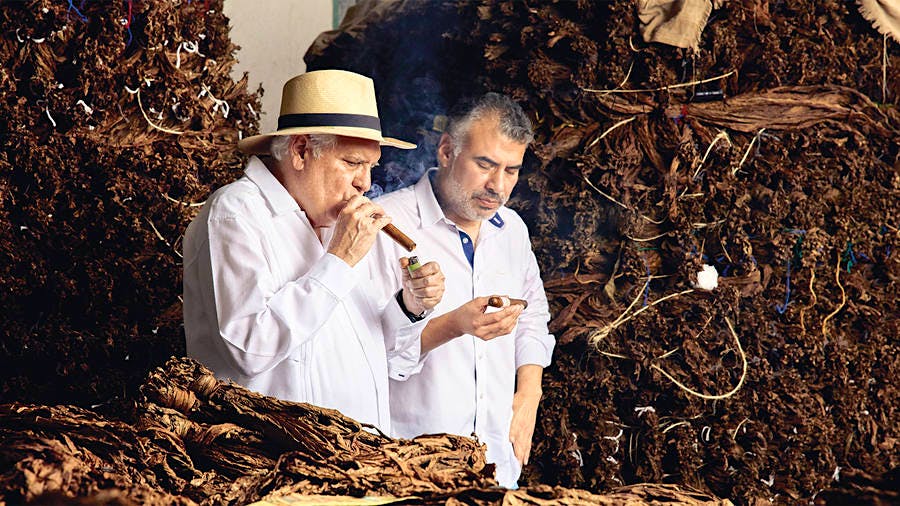 If a cigar has a dark, Mexican San Andrés wrapper, it probably came from Alberto Turrent and his son, Alejandro who provide Mexican tobacco for much of the premium industry. (Photo/Peter Garritano) 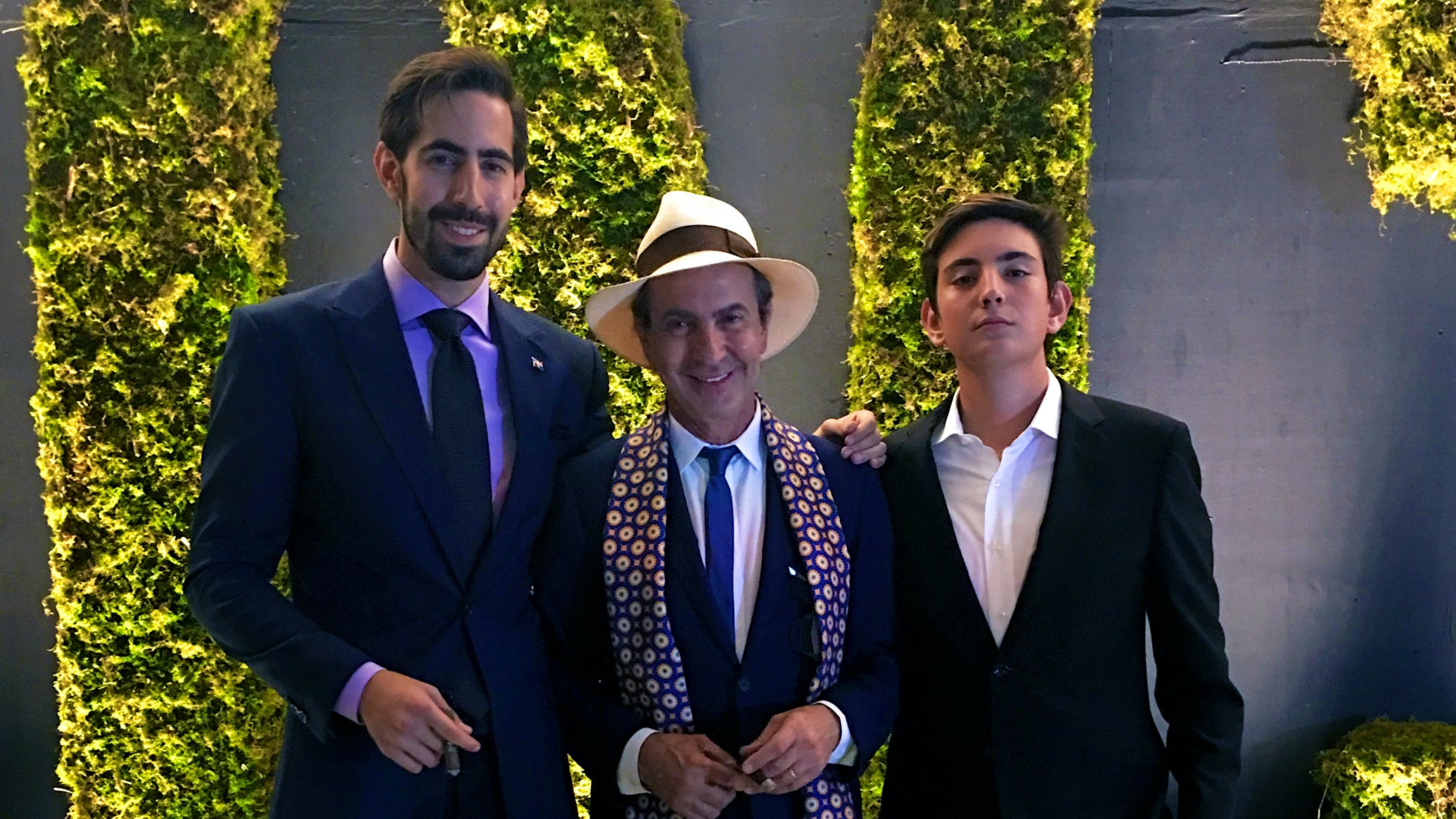 Litto Gomez, the man in the hat, has been making cigars in the Dominican Republic since 1994. Now, his sons Tony (left) and Litto Jr. (right) work with him in the family business. 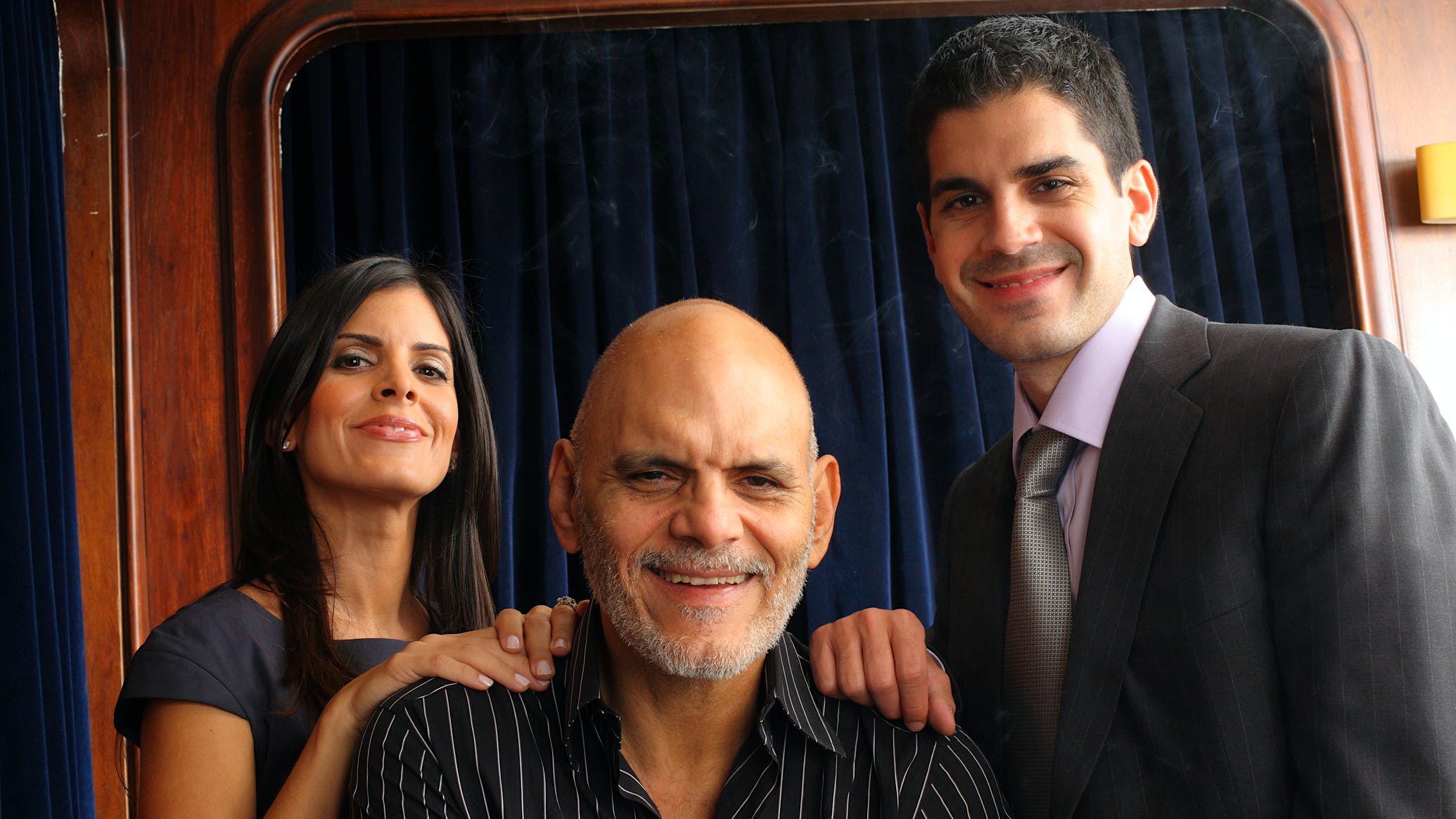 Ernesto Perez-Carrillo (center) with his daughter Lissette and his son Ernesto III. The three are all part of EPC Cigar Co., a successful company that produces some of the most distinguished cigars coming out of the Dominican Republic. (Photo/Perry Heller) 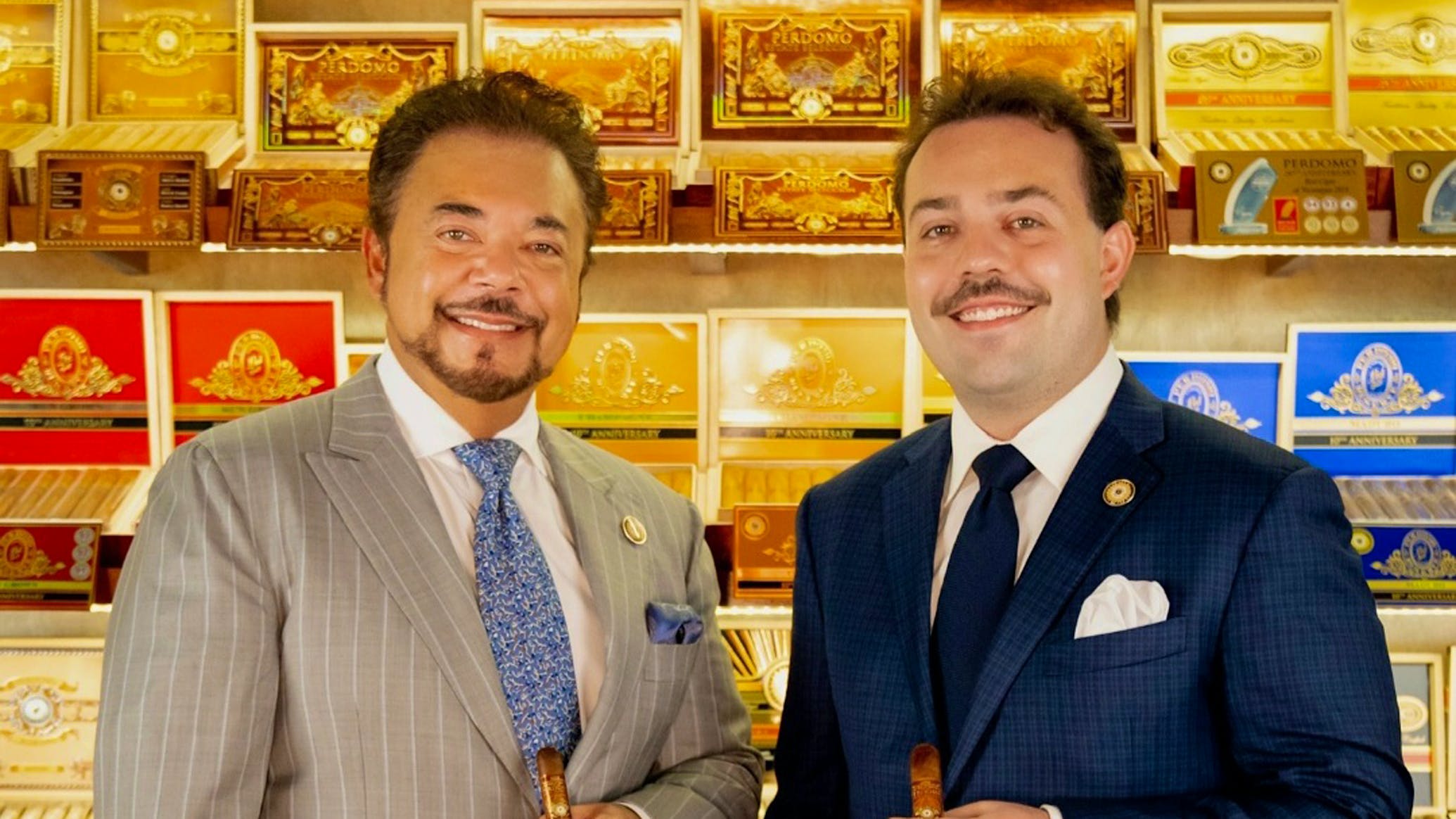 Nick Perdomo Jr. (left), the owner of Nicaragua’s Tabacalera Perdomo, is passing on his cigarmaking lessons to his son Nick Perdomo III. 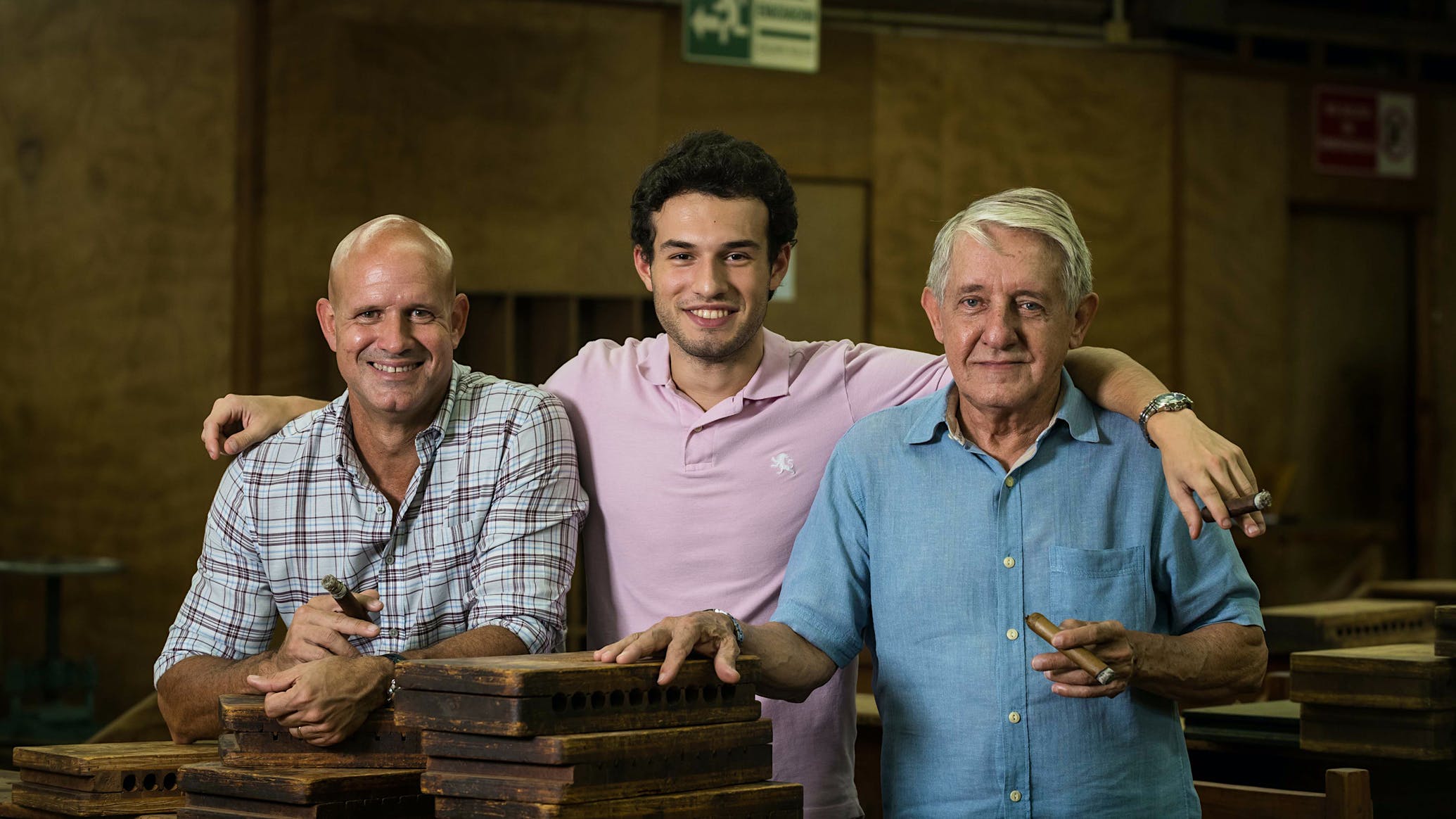 Casa Cuevas Cigars in the Dominican Republic is run by three generations of the Cuevas family. The youngest, Alec, in the factory with his father, Luis Jr. and his grandfather, Luis Sr. 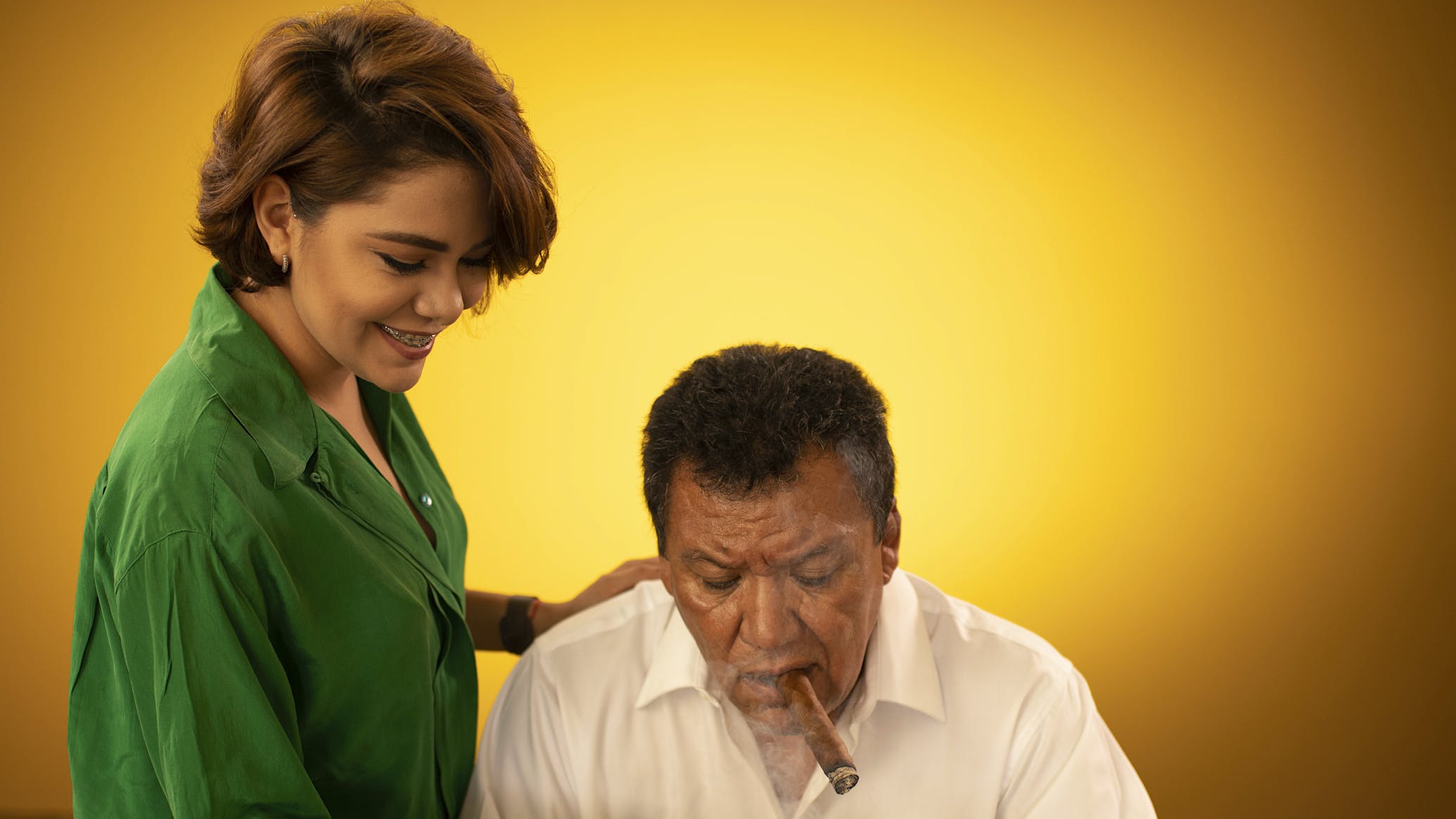 Indiana Ortez was recently named the general manager of Mombacho Cigars at just age 27. Here, her father, Omar, gives her notes on the best ways to roll a cigar from knowledge he acquired over his 30-plus years in the industry. 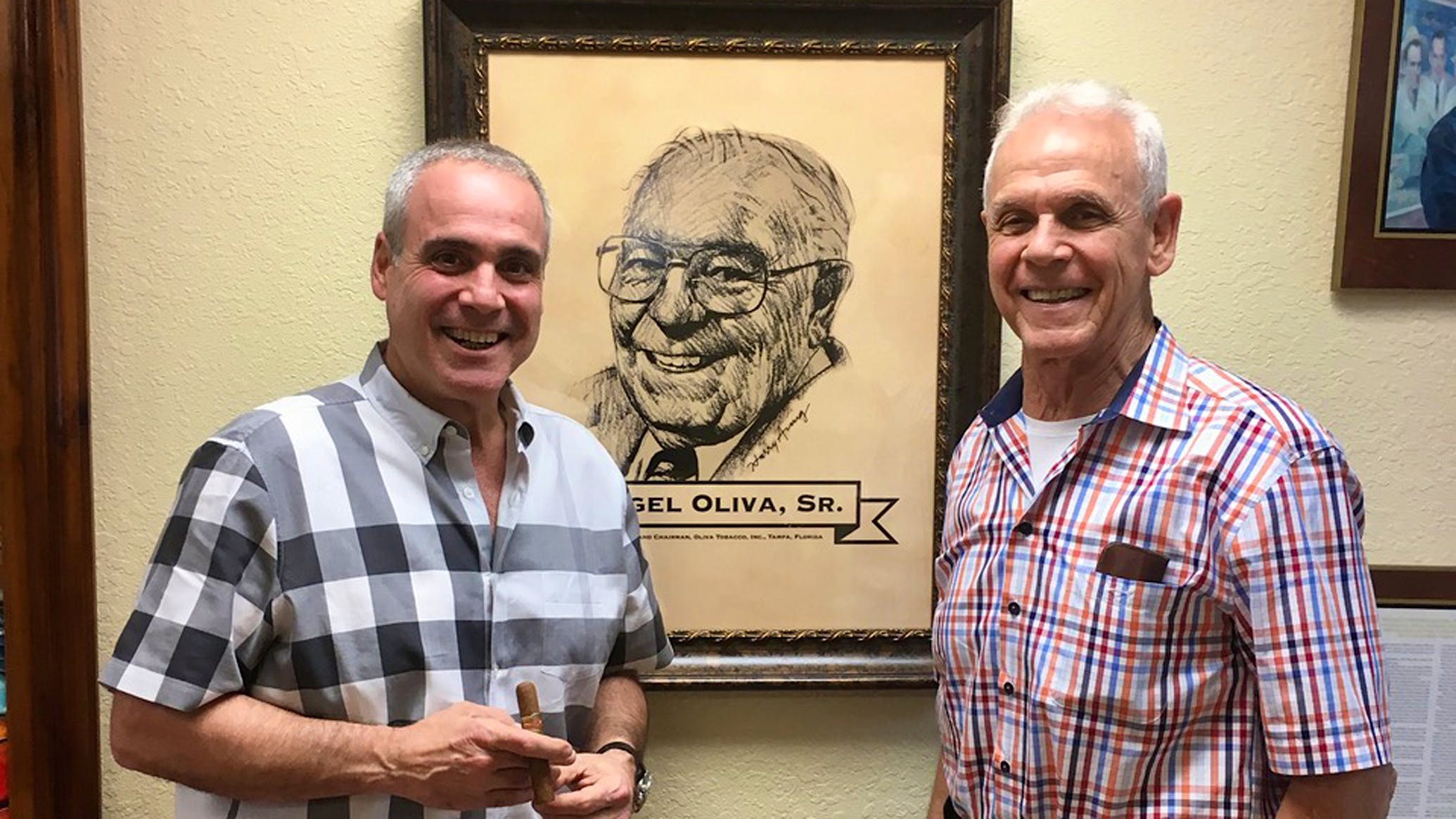 Three generations of the Oliva family have given the cigar industry some fantastic leaf. John Oliva Jr. and Sr. flank a portrait of the late Angel Oliva, who founded the Oliva Tobacco Co. in the 1930s. 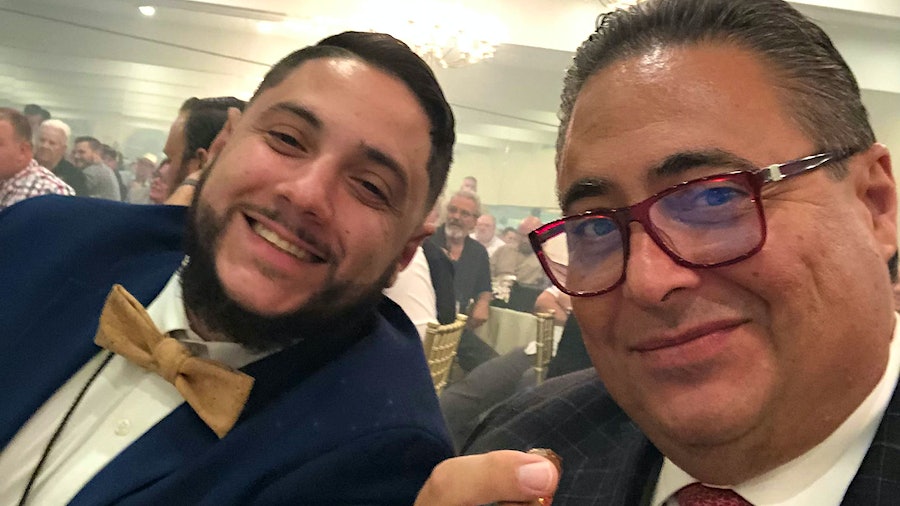 When Rafael Nodal came to the U.S. from Cuba in 1980, he had no idea he’d be in the cigar business—or that his son Carlos would one day join him. They both work on the cigar brand Aging Room, a one-time Cigar Aficionado Cigar of the Year. 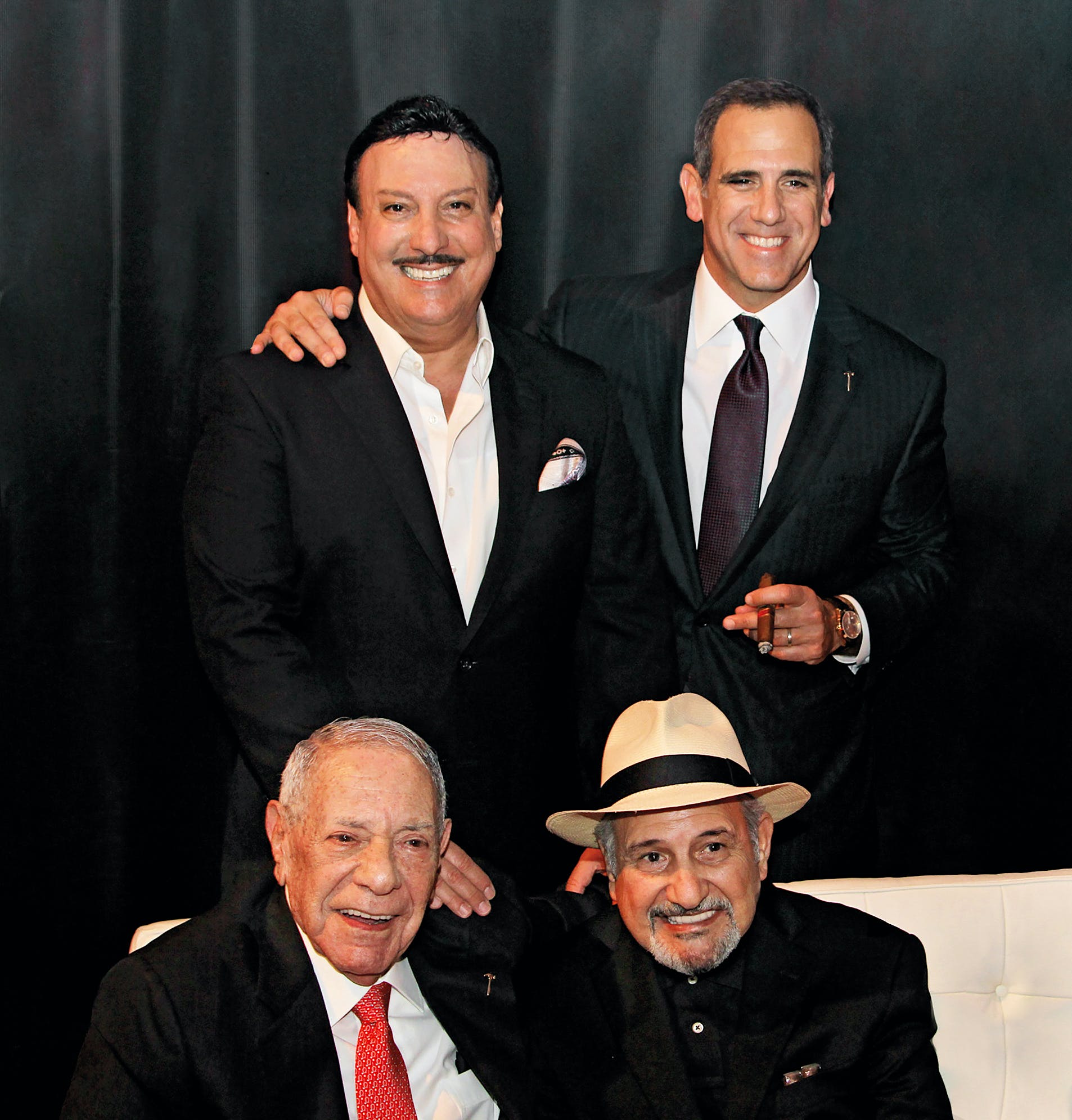 José Orlando Padrón (bottom left) founded Padrón Cigars in 1964. Carlos Fuente Sr. (bottom right) took his father’s Arturo Fuente brand out of Florida. Today, both men are gone, but their lessons live on in their sons, Carlos Fuente Jr. (top left) and Jorge Padrón (top right). Both men honor their fathers by continuing the family traditions, while forging new paths of their own.