They’re hip. They’re rare. Sometimes they’re even a little weird. But some of the industry’s offbeat cigars have gained a serious cult following over the years in much the same way cult movies attract a small, yet passionate fan base.

In the July-August issue of Cigar Aficionado, which is heading to your mailboxes now (and on newsstands starting July 9), we look at these curiously unconventional smokes in an article called “Cult Cigars and the People Behind Them.” It provides background on today’s cult cigarmakers, the cult movement and colorful anecdotes about how far some fans are willing to go to obtain these smokes. Here, we’ve conjured an assortment of some of the quirky products from the article, as well as many others, as a companion piece to the story in the magazine.

Even if you don’t enjoy cult movies like Samuel Fuller’s Shock Corridor or David Lynch’s Eraserhead (or never heard of them for that matter), we’re sure you’ll be intrigued by such cigars as the Fuente Fuente OpusX Chili Pepper, Tatuaje Pork Tenderloin, OneOff+53 or Liga Privada Dirty Rat. 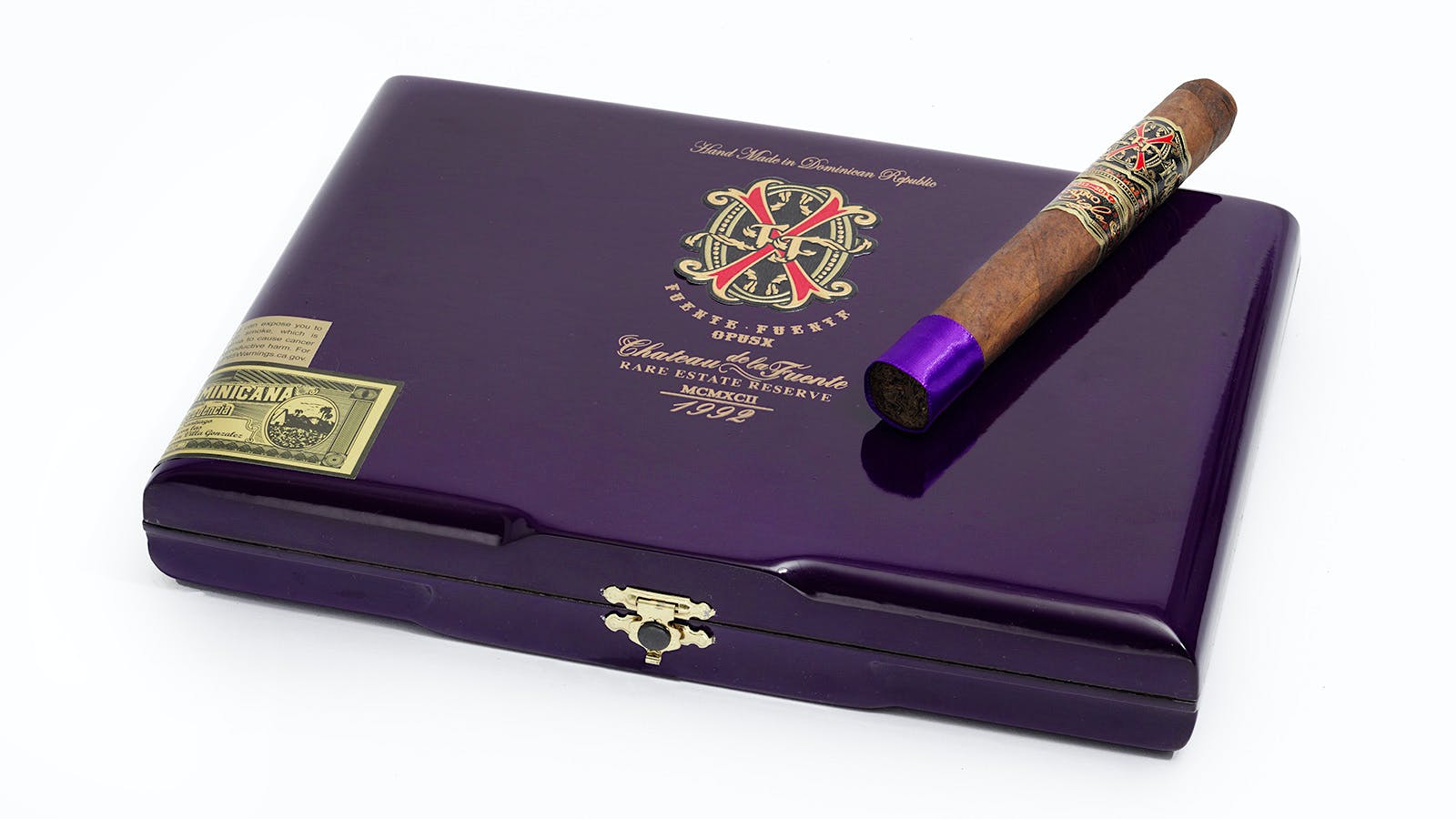 First there was the Fuente Fuente OpusX. As if those cigars weren’t rare enough, Carlos “Carlito” Fuente Jr. then created the ForbiddenX, which was even more rare. Now, there are all types of interesting and esoteric Fuente exotica, but few are as scarce as the OpusX Purple Rain Destino al Siglo Toro, which we’ve only seen at one event. It comes in a glossy, wooden box painted a princely shade of purple unlike anything in the OpusX portfolio.

Every year, Old Forester Bourbon puts out a limited-edition release to celebrate the founder’s birthday. Viaje owner Andre Farkas figured if Old Forester could do it, then so could he. Since 2016, Viaje has been releasing a few cabinets of the Viaje Birthday Blend. Needless to say, it’s made in absurdly small quantities. The cigars even come gift wrapped. 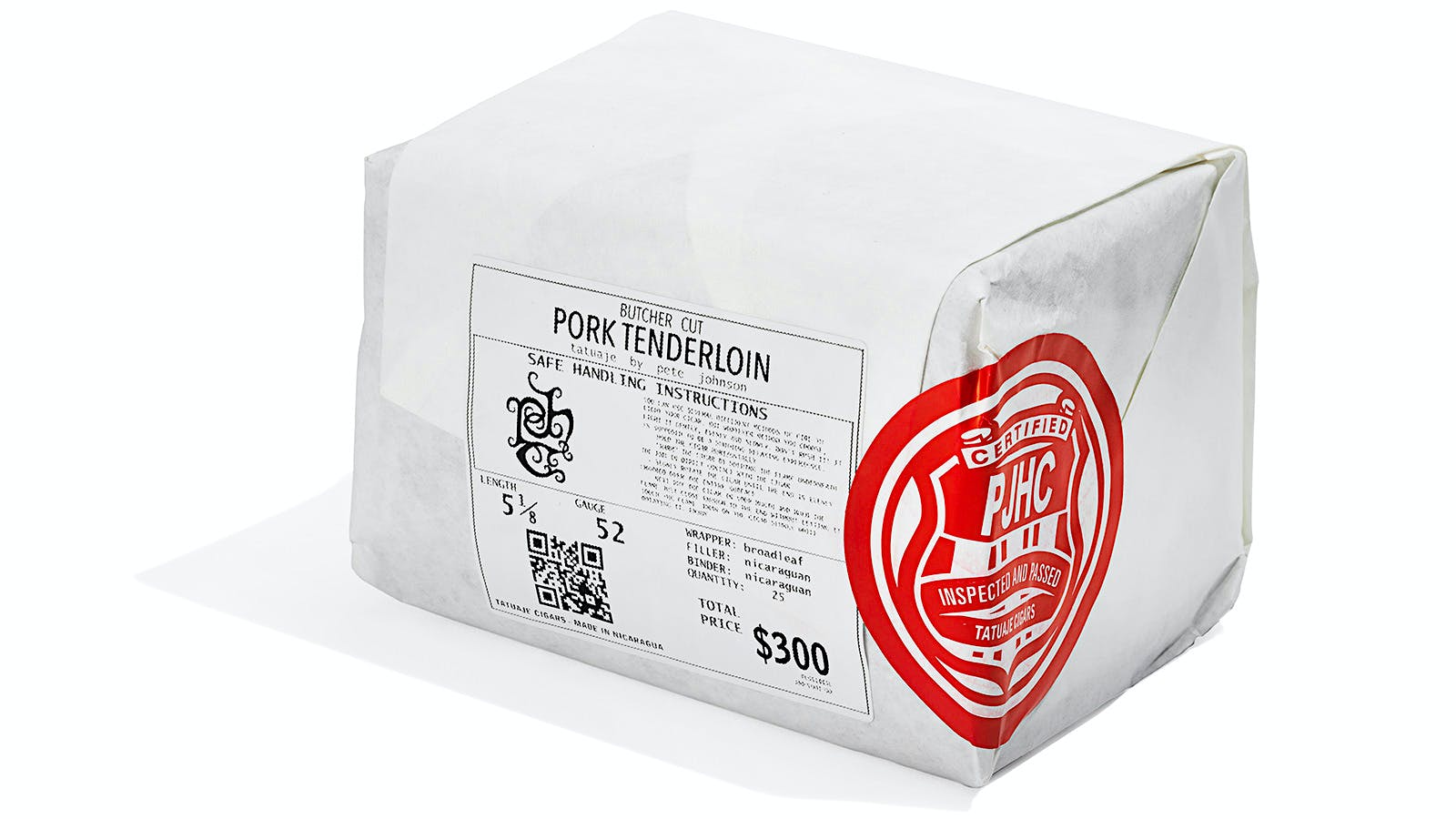 It takes a certain kind of mind to wrap up 25 cigars in butcher paper and name it after a pork chop. And it takes a certain kind of cigar fan to buy it. But that’s exactly what Pete Johnson did when he came out with the Tatuaje Pork Tenderloin. First runs of this meaty cigar were for a retailer in Boston, Massachusetts. Then, it had a brief stint as an events-only cigar. Today, it’s out of production, and highly sought after.

Lucy In The Sky With Cigars

The Sky Flower from Warped stands out within the Flor del Valle brand, as it’s the only size in the line made with medio tiempo, a sprouting of tobacco that sometimes grows on top of the plant, above the corona leaves. Not all tobacco plants produce medio tiempo, and it's prized for its intensity and aroma. Sky Flower comes out once a year or so, depending on whether or not there’s enough medio tiempo available. 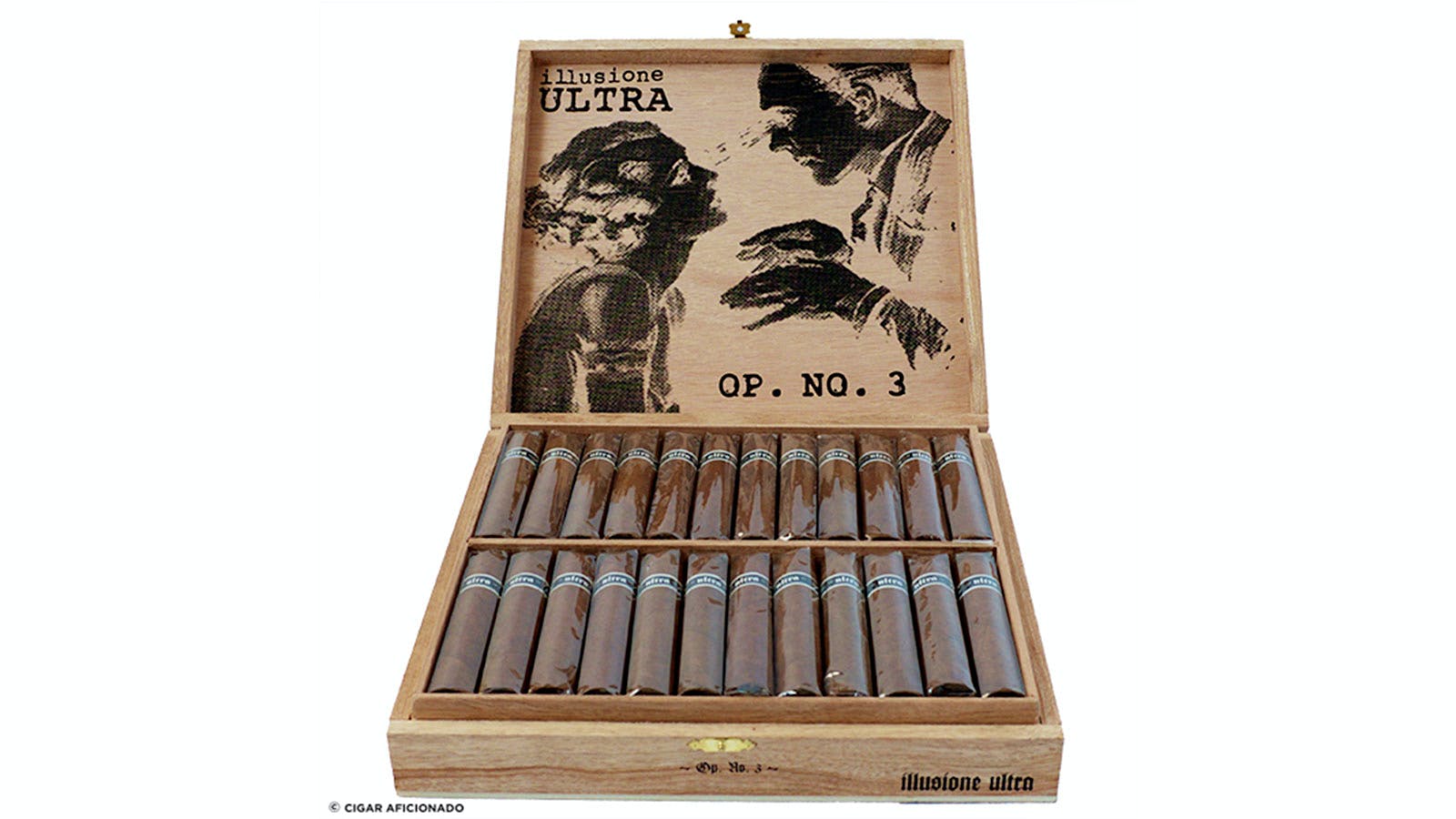 Sure, the Illusione Ultra Op. No. 3 might be a regular-production cigar, (though still made in relatively small quantities) but this mesmerizing box sure wasn’t. Only 300 of these 48-count cases were made, each printed with an image taken from a vintage ad for lessons in hypnotism.

The Chili Pepper is one of the more elusive shapes in the Fuente Fuente OpusX line. You can occasionally find them as part of a large set called The Opus22, which includes 22 rare OpusX sizes. The proceeds for that set go to the Cigar Family Charitable Foundation. If you make it to the Fuente Factory in the Dominican Republic, Fuente might pull some of these extra spicy smokes out of his “toy chest.” He sometimes even has some in his pocket at events.

A Cigar That Ages In The Box

There’s a wine theme behind Tatuaje’s Le Vérité cigars. The tobaccos are estate specific, vintage specific, and—perhaps most importantly to the concept—the fermented tobaccos used to make the cigars are not aged in bales, which is standard practice in the industry (including with all other Tatuaje cigars). The idea was to age cigar tobacco the way wine ages in a bottle. “I'd rather age the tobacco gracefully in the rolled cigar instead of in the bales,” said brand owner Pete Johnson. 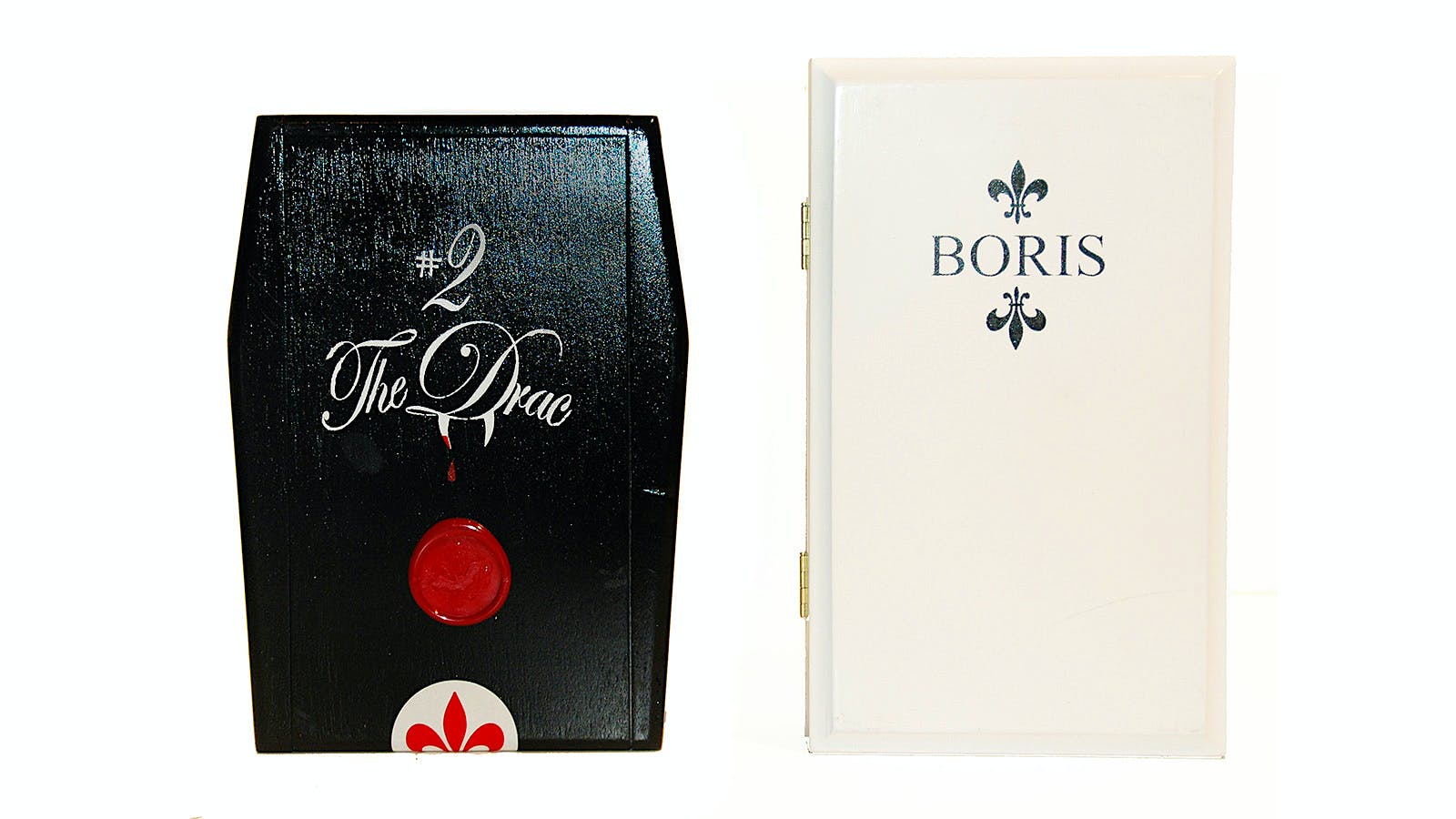 Johnson is certainly a fan of body art, but he loves a good monster movie as well. In 2008, he started a Halloween tradition by releasing a limited number of Monster Series cigars named after the ghoulish icons of Universal Pictures—Dracula, Frankenstein, The Mummy, The Wolfman—but here was the catch: only 13 retailers could carry them. And they were chosen at random. His fans went a little wild, often crossing over many state borders just to get a box. Little Monsters (shown in main photo) was an offshoot of this project. They were the same cigars, only miniature.

When OneOff first came to the market in the early 2000s, it became a cult cigar almost instantly. Then, it disappeared. In 2017, Illusione brand owner Dion Giolito purchased the rights and put it back into production, giving the blend his own interpretive spin. Illusione is already a cult brand, so one could consider OneOff to be a cult brand within a cult brand. And seeing how the OneOff+53 size shown here is twice the price of other OneOffs, it’s a cult within a cult within a cult.

A Cigar or Chocolate?

When you look at the packaging for La Relatos by Warped, it certainly resembles one of those expensive bars of single-origin chocolate, but once you unwrap it, you get five slim, tasty coronas instead. The overall aesthetic is vaguely Victorian and unusual in the world of handmade cigars.

Big Bad and His Little Brother

Carlos Fuente Jr. is a talented cigarmaker and dead-serious about quality, but his capricious sense of humor shows in some of his rarest cigars. Take the Fuente Fuente OpusX BBMF and LBMF for example. They both have trademark mop-top caps that Fuente refers to as a “Cuban tickler.” And the initials? These are powerful smokes, so the abbreviation stands for Big, Bad, Mother—you can figure out the rest. The LBMF is the Little Bad Mother. Smoke them on a full stomach, that is, if you ever get the chance to light one up.

The Liga Privada from Drew Estate started as a toro size made exclusivamente para el jeffe: just for the boss. It was the personal blend of Drew Estate’s president. After it was released to the cigar-smoking public, the brand became a phenomenon. Liga Privada has come a long way from being a traditional toro. Now, it’s offered in unorthodox shapes like the Flying Pig (a plump perfecto) and the Dirty Rat, shown here, so named for its tail.

Know of more cult cigars? Add them to our comments section below.