Some cigars are blended to start strong. Others are made to start off mild. Omar de Frias, owner of boutique brand Fratello, has a new smoke that he says can do both.

Fratello Vice Versa is a short-run cigar intended to let the smoker choose the power of the first puff. If you pick one up, you’ll think there’s something wrong—the cigar has caps on both ends. That’s intentional. You have to cut off both caps, putting one in your mouth and lighting the other. Which end you light determines the initial flavor.

“You choose,” said de Frias, standing at his booth at the PCA Trade Show last weekend. Depending on which side you put in your mouth determines if the cigar will start with spice or rather mellow. The cigar band is in the middle, and to help guide the smoker. One end of the band is red and says “full,” guiding you to the end that gives the fuller flavor. The other is yellow and says “mild.” For further guidance, the mild side is capped with a much lighter looking leaf. 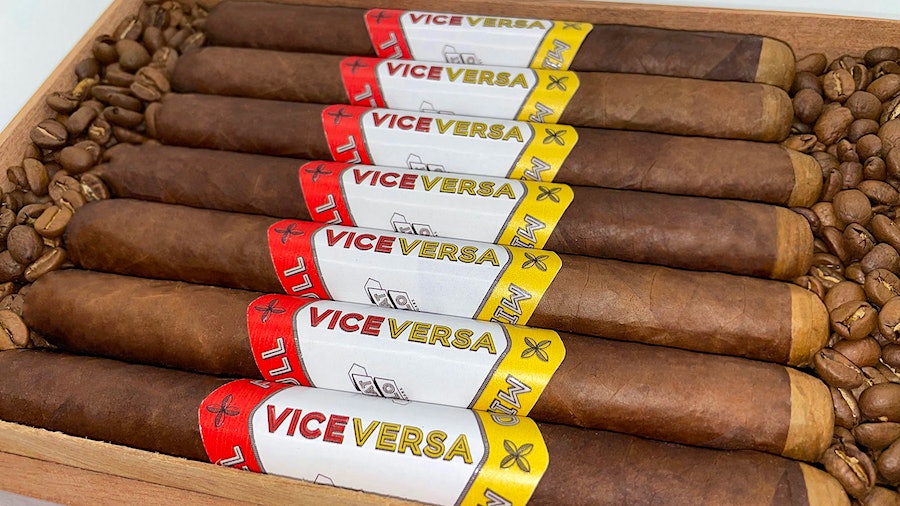 Vice Versa comes in one size, 7 inches long by 52, and retails for $15. The cigars come in untraditional packaging: a box contains 60 cigars, divided into five packs of 12. De Frias says production has been limited to 400 of those large boxes, 24,000 cigars in total. Shipping is expected to begin in mid-October.