Share
No one cared that it was only nine a.m.—it was time to light the No. 1 Cigar of the Year, and to sip an 11-year-old Lagavulin Scotch. Many more cigars (and drinks) would follow.

When speaking of cigars, most people picture sitting in a chair, puffing away and sipping on a fine Scotch. Well, attendees of the Big Smoke seminars did just that at the Resorts World Events Center in Las Vegas this past weekend. A record crowd of cigar enthusiasts queued up bright and early Saturday morning to receive a Boveda bag containing five fine cigars, including Cigar Aficionado’s Top Three Cigars of 2021. A continental breakfast provided by La Aurora was complemented by a La Aurora Preferidos Gold Robusto that was also passed out, fortifying the audience with a good meal, for there were plenty of cigars to smoke, and no shortage of fine spirits.

As guests took their seats, the air turned alluringly smoky with a peaty undercurrent as glasses of Scotch were being poured around the room. Executive editor David Savona took the stage to greet the audience of well over 600, the largest seminar turnout in Big Smoke history. The room was a combination of return visitors along with an impressive amount—perhaps one third—of first timers, indicative of the new blood among consumers in the cigar industry. 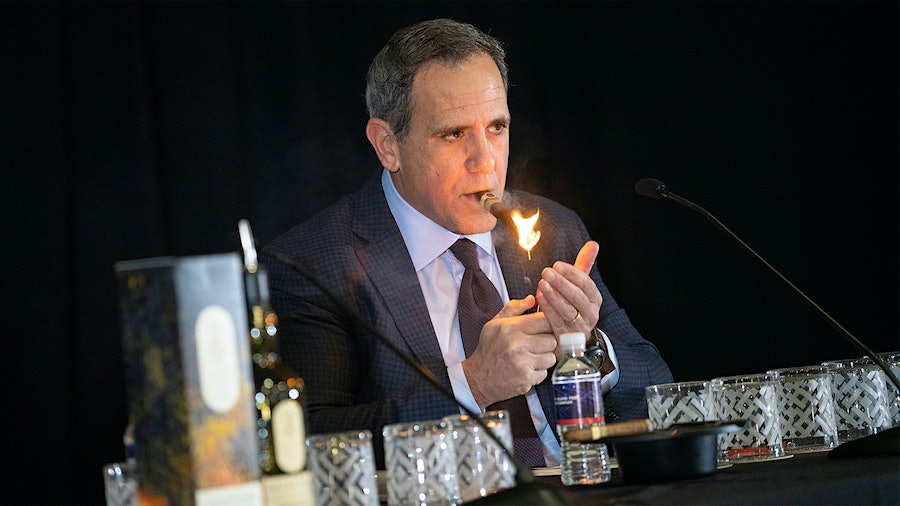 Jorge Padron lighting one of his cigars on stage.

Savona remarked how the seminars sold out back in August, and thanked the crowd for their presence. “If you’ve been here before, you probably think you know what’s going to happen—we will build up to the Cigar of the Year, and then have some kind of spirit.” This year, he said, Cigar Aficionado was tearing up the script. “The first cigar of the day? The Cigar of the Year. You’re going to smoke it on a fresh palate.” And he said the Scotch wouldn’t wait for the afternoon. Even though it was just after nine a.m., it was time for some whisky as well.

Whisky Advocate named a similar Lagavulin 2021’s Whisky of the Year, the Lagavulin 11 Year Old Offerman Edition Guinness Cask Finish. The new version of the whisky, Diageo’s third collaboration with “Parks and Recreation” actor Nick Offerman, while the same age, is aged in a combination of reused American oak and European oak red wine casks that have had the wood shaved down on the inside and then heavily charred, Leon explained. 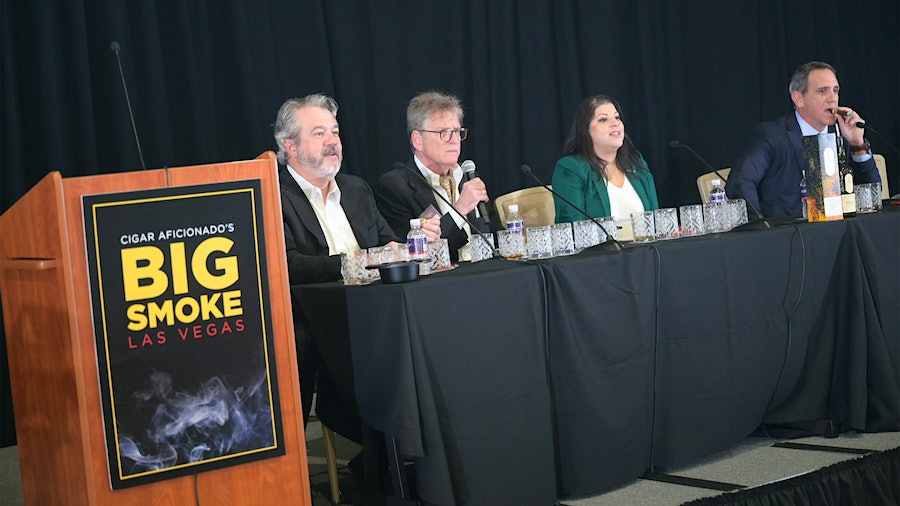 The Cigar of the Year seminar. From right: Jorge Padrón, Vanessa Leon, Jack Bettridge and David Savona kicked off the Big Smoke seminars with a pairing of Padrón Cigars and Lagavulin Scotch.

The purpose of charring the wood inside is to help break down the lignin, which is found in the cell walls of the wood. This helps release flavors from the wine absorbed by the wood into the whisky. She went on to explain that while Lagavulin is a peated Scotch, the extended fermentation time the distillery employs produce creamier, fruiter notes and the maturation process imbues the whisky with its golden amber color.

Bettridge and Leon spoke about flavors that were present in the Scotch such as apple, chocolate, tangerine and peat as the audience paired the Lagavulin and Padrón. Bettridge, Cigar Aficionado’s spirits expert, also noted how it is sometimes difficult to pair peaty whisky with cigars because the “smoke against smoke” notes can clash, but this was certainly not the case here. “It’s almost like they were meant to go together,” Savona observed.

Scotch even plays a big role in cigars other than just pairings. Savona spoke of how cigarmakers often drink Scotch after a day of blending cigars, and how after a day with Jorge Padrón and his father José Orlando, the Scotch would come out and conversation would ensue. 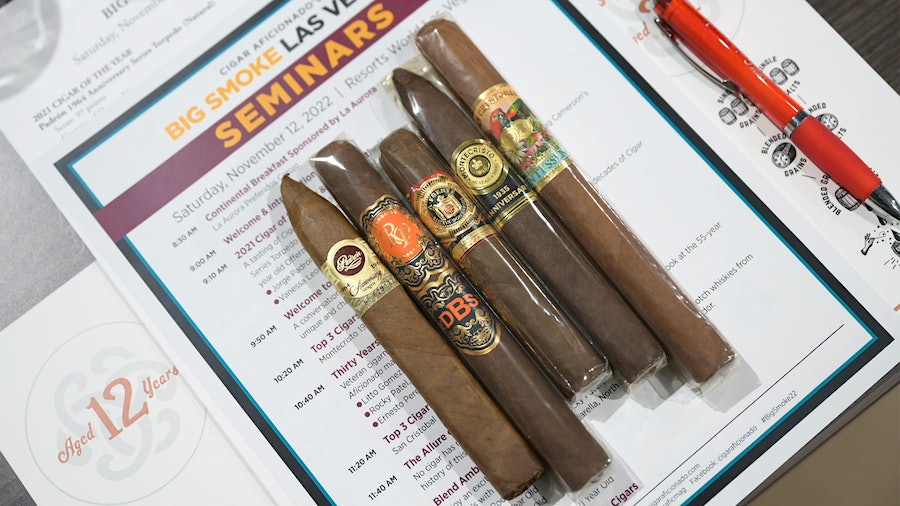 This was only part of the cigar lineup for the seminars: The Padrón 1964 Anniversary Series Torpedo, DBS By Rocky Patel Toro, Arturo Fuente Don Carlos Robusto, Montecristo 1935 Anniversary Nicaragua No. 2 and San Cristobal Quintessance Churchill. There was also a La Aurora Preferidos Gold Robusto and an Oliva Serie V Melanio Churchill.

“[Drinking Scotch] was a big part of the process of developing a lot of these cigars,” Padrón stated. “Every day we would be in the factory, we’d be working, and then in the afternoon we’d come back and have some Scotch and just relax and smoke cigars. And honestly it was quite some of the best times I ever shared with my dad—over a Scotch and cigar.”

Padrón also spoke of how he as a relative newcomer to the cigar business approached his father José Orlando in the early 1990s to create the 1964 Anniversary Series to celebrate their upcoming 30th anniversary. “I was fortunate enough to have my father with me, who listened and was open to the idea of trying introduce a new product into the market. Something that he really had not done in the past.”

As he puffed, on his cigar, Savona gave a tiny preview of a typical cigar tasting and described to the audience what he tasted as he smoked, noting its toasty character, with the cocoa powder sweetness that he finds typical of the line and baked nuts with a very long finish. He also noted how difficult consistency is in making a cigar and how Padrón manages to maintain its consistency. The company currently has won Cigar of the Year a record four times. 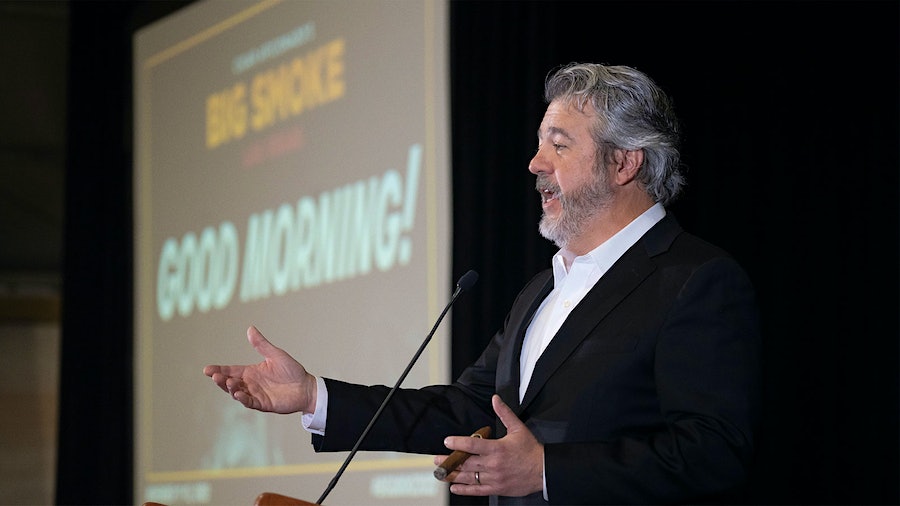 Executive editor David Savona starting off the show, a Padrón cigar already in his hand.

That cigar was only the first of many that would be presented during the seminars, and more whisky would come later. The Big Smoke seminars were off and running, with much more smoky education to come.