The third seminar for this year’s Big Smoke Meets WhiskyFest focused on Nicaragua, the No. 1 exporter of cigars to the United States. The country is a major player in the cigar world, accounting for 68 percent of all handmade cigar exports for January, according to the Cigar Association of America. Gordon Mott, the senior contributing editor of Cigar Aficionado, was joined onstage by cigarmaker Rocky Patel; Liana Fuente, the vice president of brand development for Arturo Fuente and Tatuaje brand owner Pete Johnson.

“You’ve gotten a lot prettier, Carlos,” Mott joked as Liana sat down. Her father, Carlos Fuente Jr. was originally scheduled to be onstage, but was unable to attend the morning seminar.

Each cigarmaker had provided a cigar for the audience to smoke: Patel was represented by his Rocky Patel Sixty, Johnson by his Tatuaje Regios and Fuente by her Arturo Fuente Don Carlos Double Robusto. The first two cigars are rolled in Nicaragua, the Fuente is made in the Dominican Republic, as Fuente has yet to complete its Nicaraguan cigar factory. 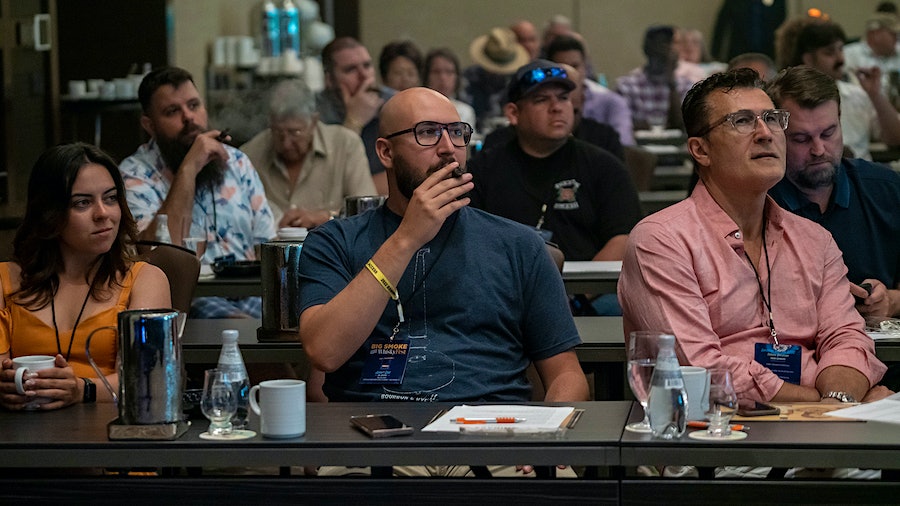 The audience puffing along and listening

The panel began with Johnson talking about his relationship with Nicaragua and what drew him to Nicaraguan tobaccos. Johnson spoke at length about his love of Nicaraguan leaf, along with his relationship with the Garcia family, whose factories make Tatuaje cigars in both Miami and Nicaragua. The Garcias didn’t grow their own tobacco when Johnson founded his brand in 2003, but now the leaves they grow in Nicaragua make up the majority of his cigars. Johnson then spoke on how Nicaragua plays a major role in his cigar identity.

“I have a lot of respect for the history and tradition of this industry and Nicaraguan tobacco for me was the absolute closest to what I remember of old Cuban cigars,” he said. “When it comes to the history of tobacco, Nicaragua definitely kind of nailed my palate into a happy place and I stuck with it.”

The conversation turned next to Patel, looking dapper in a gray and blue checked suit. When Patel started making cigars in the 1990s, all of them were made in Honduras. When he started working with the Plasencias, who also grew tobaccos in Nicaragua, that access allowed Patel to experience Nicaraguan tobacco and include it in his blends. Years later, he set up his own factory and farms in Nicaragua (while maintaining the relationship with the Plasencias in Honduras) and he explained though it was a big factor in this decision, vertical integration wasn’t the sole reason. 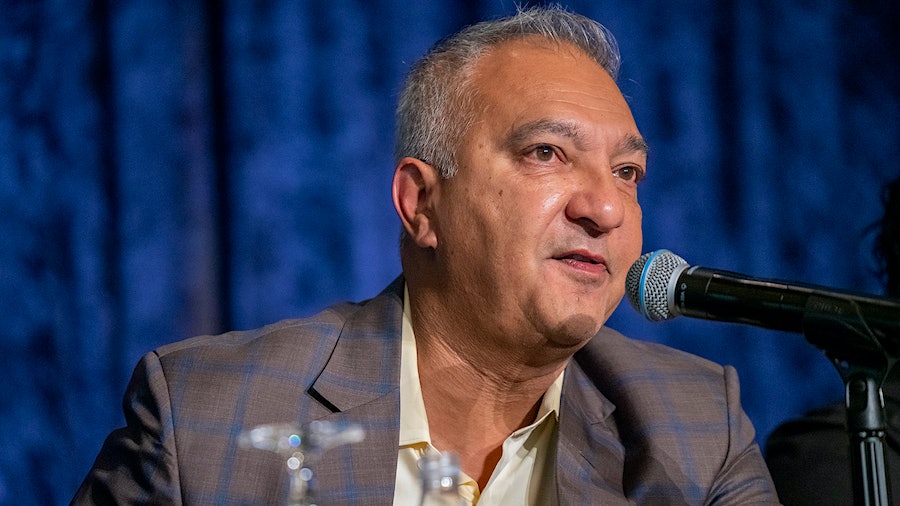 Rocky Patel, who makes a considerable number of his cigars in his own factory in Nicaragua

Patel went on to explain that the historic political instability of both Honduras and Nicaragua spurred this decision: “We wanted to make sure we had our feet on both sides of the border and if something happened, there was some sort of turmoil… we wanted to make sure that as a business we were protected.” He provided an example about his grandfather, who was a farmer in Africa and lost everything due to the government seizing the land.

When discussing what made Nicaraguan tobacco special and the industry’s shift towards using it, Patel cited José Orlando Padrón and the popularity and consistency of their cigars as one of those reasons. “He was really the pioneer for Nicaragua for all the companies that are there now,” he said to thunderous applause. 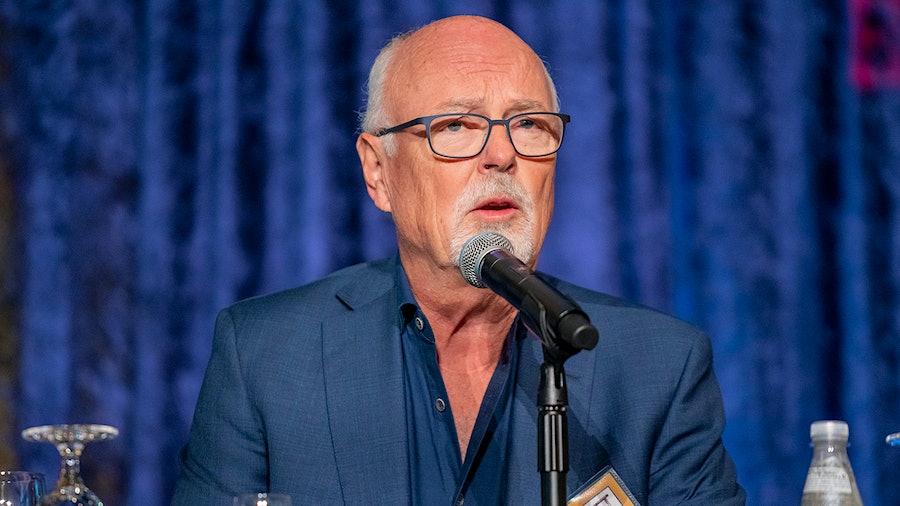 Mott then directed his attention to Fuente. Though the Fuente family is known today as a Dominican-based cigar company, their roots actually trace back to Nicaragua, where they had a cigar factory until it was destroyed in 1978 during the political unrest leading to the Nicaraguan Revolution. Liana spoke about her grandfather, Carlos Fuente Sr., and his tenacity and resilience building his family’s business back up in the Dominican Republic. She also discussed how they always intended to go back one day and the Nicaraguan factory they announced in 2018 will finally be breaking ground this July.

“We are extremely excited to go back, it’s like home,” she said to applause.

Mott then asked Liana if there will ever be a Nicaraguan puro from the Fuentes. She did not confirm definitively, but she said that her father, who she called a “master chef,” works with many different ingredients from different places and that she believes something very special will likely be coming from their Nicaraguan factory. Liana also stated that the Cigar Family Charitable Foundation, which provides education assistance for local children in the Dominican Republic will also receive a Nicaraguan counterpart. 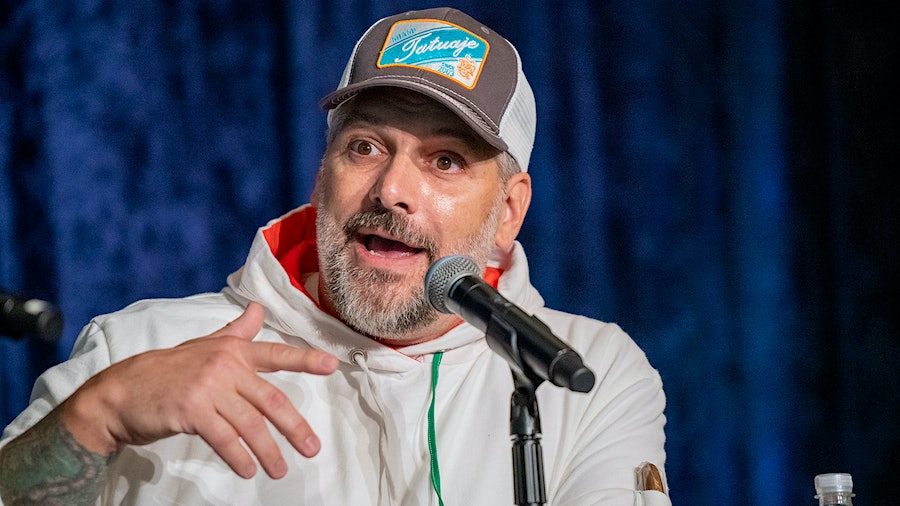 Johnson agreed with Liana’s “master chef” remark with tobacco blending, explaining with how all the different seed varietals and soils in Nicaragua alone that are available, thousands of blend possibilities can be created, but the right ones have to be made.

“I don’t blend to the market, I blend to my palate and what ends up on the market is what I like because if no one buys it, I have to be stuck smoking it,” Johnson joked.

Up next, read about the last seminar of the day: The Cigar of the Year Meets the Whisky of the Year.