Share
Alan Rubin, the founder of Alec Bradley cigars. He named his company after his two sons.

The first seminar of the second-ever Big Smoke Meets WhiskyFest set the tone for a day full of smiles and enthusiasm. It was just after 9:30 AM in a ballroom at the Seminole Hard Rock Hotel and Casino in Hollywood, Florida, but guests had already dove into their bag of cigars. They were puffing away when Cigar Aficionado executive editor David Savona asked Alan, Alec and Bradley Rubin of Alec Bradley Cigars to discuss their familial dynamic and the keys to their success.

The Rubins took natural command of the audience, offering an alluring balance between a sentimental family story and a humorous relationship between a dad and his children, as well as a touch of good-natured sibling rivalry. Alec and Bradley, the oldest and youngest son, respectively, presented a noticeably contrasting dynamic. Alec largely mirrored his father’s look, with a blazer, button-down shirt, and short-cut hair, whereas Bradley sported a partially opened-up short-sleeve button-down with a gold necklace and an impressive mullet and mustache few could pull off. 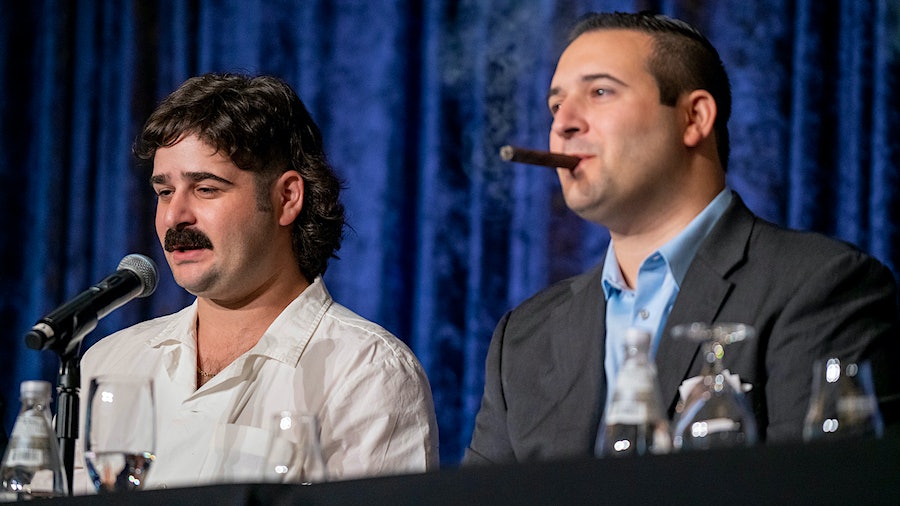 Bradley (left) and Alec Rubin, the namesakes of Alec Bradley Cigars. Note the microphone they (sort of) shared on stage

To start things off, Alan Rubin discussed how he got started in the business. Cigars weren’t always in the picture for him; he ran a different business beforehand (alongside his own father) that he eventually sold. As he considered his next move, Alan knew he wanted to do something different from a business model perspective, but his plans didn’t exactly unfold how he expected, and he instead followed his passion for cigars. Thus, Alec Bradley Cigars was born.

From a young age, Alec and Bradley shared the same passion for the cigar business as their father. As they grew up, the brothers were eager to get into cigars, but Alan gave them just one rule: you can’t have a cigar until you’re 18. Alec shared his first cigar experience with the audience, one where he waited as instructed until he was 18 when he smoked a Maxx Nano, which was stronger than he anticipated. Bradley then gave a similar account of his first experience at 18, admitting he struggled with the mechanics. But the tables quickly turned on stage as Alan asked to chime in for a second. “So when Bradley turned 18, I said ‘Why don’t we sit in the backyard together, and we’ll have a cigar together for the first time at 18.’ And I pulled out a cigar, and he goes, ‘No, Dad, I like Black Market,’ and I’m like, ‘Well, this is supposed to be your first cigar now,’ and he’s like, ‘Well, you told me don’t get caught,’” said Alan, prompting the crowd to erupt in laughter and applause.

Such moments gave those in attendance a glimpse into the close relationship of this father, son and son team. “To sit with my two sons and smoke personally is probably one of the most enjoyable things I do in my life,” said Alan. He also noted that the trio has a fantastic working relationship which was undoubtedly a critical factor in Alan trusting his two sons to start their company brand, Alec and Bradley.

The oldest by three years, Alec had a subsequent three-year headstart on Bradley as part of the family operation. But it wouldn’t take long for Bradley to make his impact as Alec mentioned that not even two months into the job, Bradley approached him with the idea to start their own brand together as brothers. Their first release was Blind Faith—named Alec and Bradley, rather than Alec Bradley—although it took them about a year to finish with several restarts along the way. “It has really been a roller coaster starting Alec and Bradley,” said Alec, admitting that the brothers decided to change their approach after the first release and split up responsibilities. “Bradley focuses more on the concept, the name, the packaging. I focus a little bit heavier on the blend, but we both have to agree on both at the end of the day.” 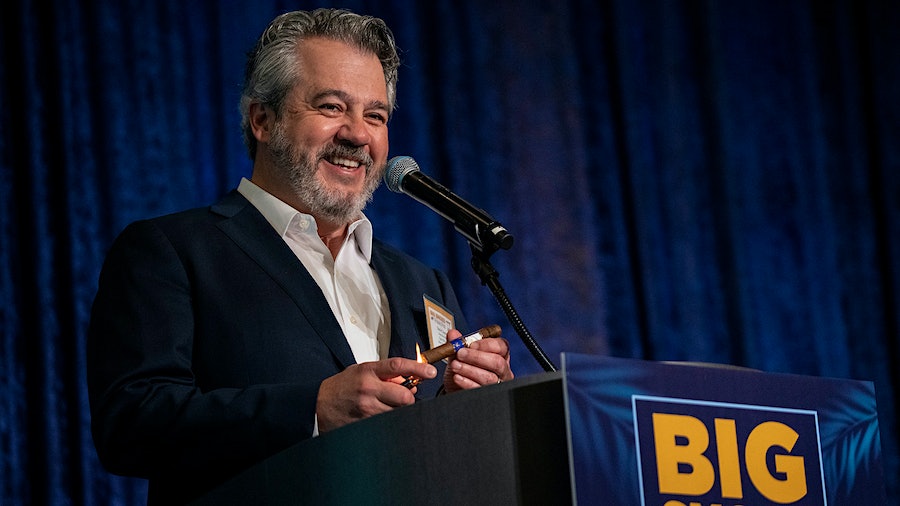 Executive editor David Savona welcoming the crowd to the seminars, and introducing the Rubins to the stage

As they shared their story of launching their brand, the two brothers joked with one another on stage, jokingly dueled over one microphone and painted a pleasantly chaotic scene anyone with a sibling can relate to, but the brothers have had great success with their brand right off the bat. Alec and Bradley has earned two Cigar Aficionado Top 25 awards, and their cigars consistently rate high in blind tastings, not bad for a pair of young, dueling brothers.

“I thought it was a great addition to our company. They were going to speak to a different audience than we were speaking to, they were going to bring in an audience more towards their age group, which I felt would expand our brand worldwide, and it did happen,” said Alan in regards to his sons venturing out on their project.

The brothers hope this new line will be another notch in their belt on the road to success, which the two take great pride in. “It’s an incredible feeling. It’s something I get somewhat emotional about, seeing not just my name but projects I’ve got to create with Alec. Seeing them in the Top 25 of Cigar Aficionado is something that my father worked years and years for, and we were lucky enough to be on there so shortly, and every project that we work on it feels like that’s just a part of you living there.” said Bradley.

As powerful and joyous as this seminar was for those in attendance, it was perhaps more rewarding for the Rubins. “This is without question one of the greatest days of my life,” said Alan. “For them to both end up working with me and then to be up on stage here, the three of us, I couldn’t have dreamt this. My dreams weren’t lofty enough to see this.”

Up next, read about the seminar that followed this one: The World of Montecristo.