Share
Rafael Nodal, who helped create the Montecristo that was named No. 2 Cigar of the Year, entertaining the sold-out crowd during the Saturday seminars.

Sometimes it’s difficult to get the top-rated cigars from Cigar Aficionado’s Top 25—but not if you go to the Big Smoke Las Vegas seminars. The audience received the top three cigars of the year, which were tasted while being presented by the people who made them. After starting with the No. 1 Cigar of the Year (see previous coverage) then moving on to the seminar on Cameroon tobacco with Jeremiah Meerapfel, executive editor David Savona and Rafael Nodal, head of product capability for Tabacalera U.S.A., took the stage. The latter was dressed vividly in his usual bright blue blazer and glasses.

“Who’s ready for another cigar?” Savona asked to enthusiastic applause from the audience. “I told you we’d smoke a lot of cigars today, I’m not lying.”

Nodal, who started in the cigar business selling cigars in 1988 before founding brands of his own such as Aging Room, began working with the Montecristo brand for Altadis U.S.A. in 2017. One of his more recent explorations of the brand, the Montecristo 1935 Anniversary Nicaragua No. 2 was also fittingly named the No. 2 Cigar of 2021 at 95 points.

The Montecristo brand began in 1935 in pre-Castro Cuba and has since become a mainstay of the cigar industry, prized for its bold but delicious flavor. Savona asked Nodal to tell the audience about how it felt working with such a legendary cigar brand and creating a new version of it. 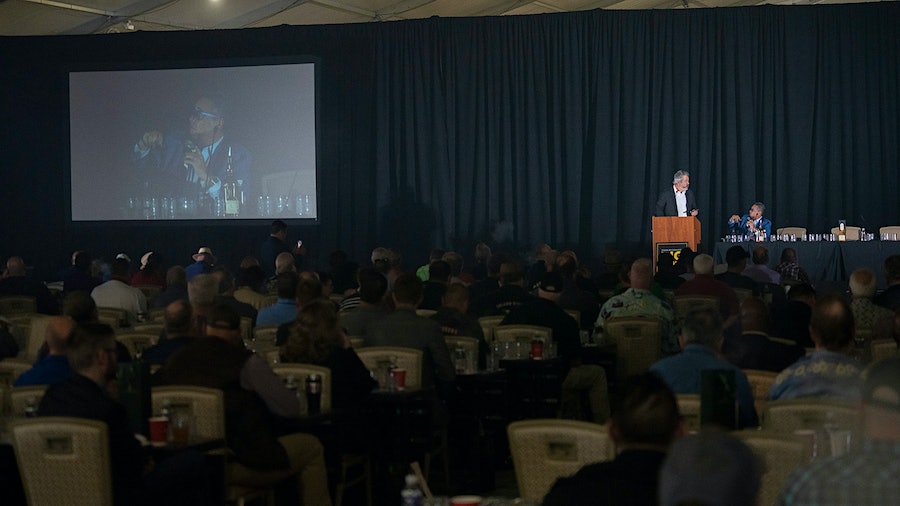 The audience at the Big Smoke seminars listening and smoking along during the presentation of the No. 2 Cigar of the Year.

“It was nerve-wracking,” he said. “Because it is not the same as making a blend for my own Aging Room or some other cigars. When you make a blend for Montecristo and, in addition, it was to celebrate the 85th anniversary of this amazing brand… All I wanted was not to mess it up."

Nodal turned to frequent collaborator and Nicaraguan cigarmaker A.J. Fernandez for the project and together they did their research and sought to recreate the blend.

As he puffed on his Montecristo, Savona remarked to Rafael and the audience how strong of a cigar it was, yet remained complex with evolving flavor.

“It is bold in flavors. You know sometimes people confuse complexity and strong flavor with a strong body. And what we wanted to do was a strong flavor,” said Nodal. “When you light up a cigar, that aroma has to get to you… it’s like dating, right? You see a woman in a beautiful dress,” Nodal said. “You say, oh my God, it looks good, it smells good and then you start talking to them and say, oh my god what a terrible, terrible talk! And that we don’t want this to happen with cigars.”

Savona asked him if he had doubts after the blend had been finalized and was about to go into production. Nodal admitted that he was worried that he hadn’t gotten the blend quite right, that he gets beset by doubts and on the day that production was about to start, he almost shut down production to start over but thankfully was stopped by his wife. 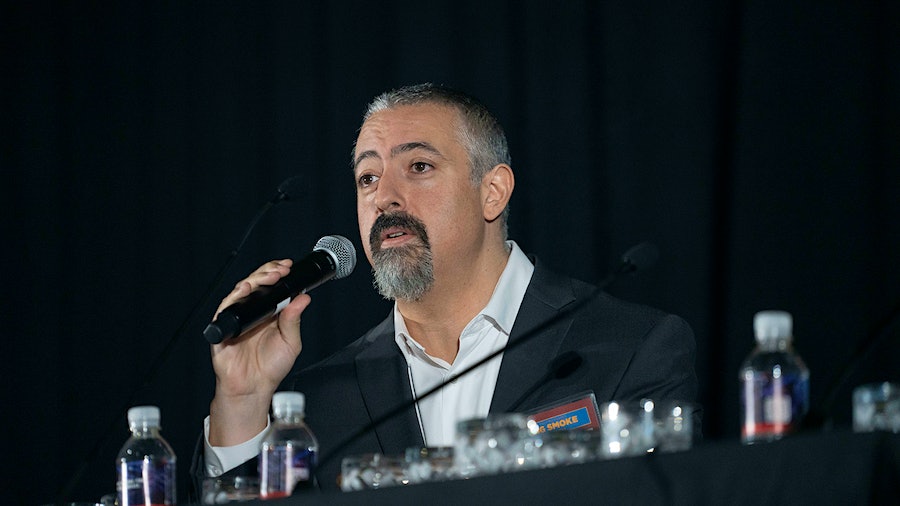 Greg Mottola moderated a tasting and discussion of the No. 3 Cigar of the Year, the San Cristobal Quinitessence Churchill.

Nodal also told the audience how Benjamin Menendez smoked it for the first time. Menendez is a legend of the cigar industry, with a total of 63 years under his belt beginning at his father’s H. Upmann cigar factory where the Cuban Montecristo brand was born. When the elder cigar statesman smoked the cigar, Nodal was eager for his approval. “I’ll never forget the day, he came and said, ‘You did us right.’ And that for me, it’s great being Cigar Aficionado’s No. 2 of the Year, it’s an amazing thing, but having this guy come and tell me you did us right, it was for me the most amazing thing.”

After the conclusion of the Thirty Years of Cigar Aficionado panel, managing editor Gregory Mottola and Sathya Levin vice president of Ashton Distributors Inc. came onstage to discuss the third highest-ranking cigar of 2021: the San Cristobal Quintessence Churchill, which was rated at 95 points by Cigar Aficionado.

As Levin took his seat, Mottola first congratulated him and Ashton for providing a cigar that performed so well and consistently through the rigorous taste tests conducted by Cigar Aficionado but also offered him his condolences due to the outcome of the World Series as Ashton is located in Philadelphia.

The two discussed the history of the San Cristobal, which traces its roots back to Cuba. The Cuban version, called San Cristobal de la Habana, was trademarked in 1999, but interestingly, San Cristobal (which translates to St. Christopher) was trademarked for the U.S. market two years earlier. This is atypical as most Cuban brands predate most other versions of their brands. Levin explained that in the 1980s and 1990s, his father Robert Levin spent a lot of time traveling through the Dominican Republic and during those drives through the countryside, he noticed signs everywhere that read San Cristobal and decided to create a trademark out of it. 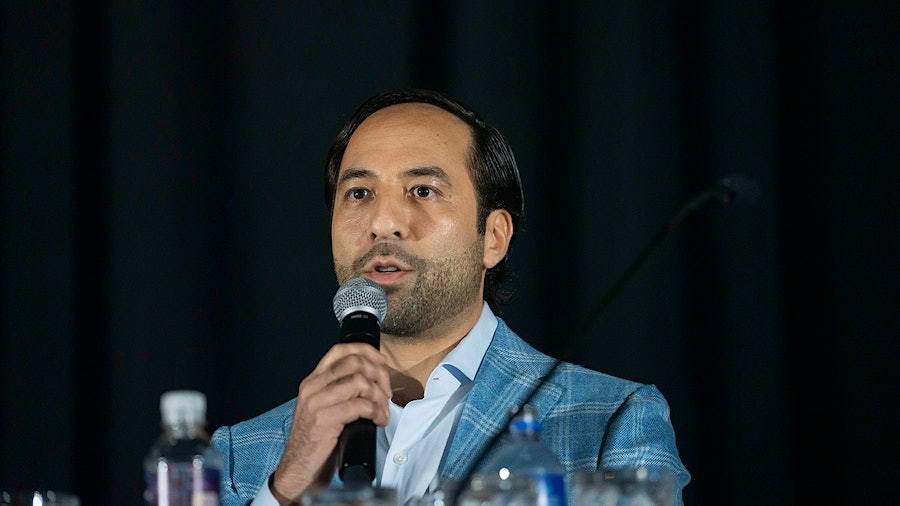 Ashton’s Sathya Levin spoke about his company’s San Cristobal brand, which was named No. 3 Cigar of the Year by Cigar Aficionado.

The resultant cigar, the core San Cristobal line, was launched in 2007 and was the company’s first Nicaraguan cigar and it and all other San Cristobal offshoots (such as Quintessence, which was released in 2016) are made by the Garcias at My Father Cigars S.A. At the time, as Levin explained, Arturo Fuente’s production operation was maxed out, so Ashton sought to explore new partners to make brands such as San Cristobal and La Aroma de Cuba. And Levin believes that new partnership was the right call.

“It was like magic,” he said. “The synergy we have with the Garcias from day one of the meeting was unbelievable—a lot of shared values as far as the way we do the industry and they’re bringing so much passion and commitment to quality and excellence. Just enormous respect for them.”

Mottola asked Levin about his involvement in the blending process. Levin stated that while he and Ashton guide the process and know what they want from the cigar, they overall entrust the talent of the master blenders to bring the cigar to fruition. He likened his entering a cigar factory and demanding to blend the cigars to entering someone else’s kitchen. “I love eating at restaurants, I think I’m a pretty good judge of food and I know what I like but I’m not going walk into a kitchen… and say, ‘I’m going to be the chef.’”