Share
Rocky Patel with his new DBS by Rocky Patel cigar, which had its first official tasting at the Big Smoke Las Vegas seminars.

There’s nothing like a cigar and Scotch before lunch, but why stop at just one? After a morning filled with cigar talk and smoke, which started with a pairing of the Padrón 1964 Anniversary Series Torpedo and a new release from Lagavulin, it only seemed fitting that the 2022 Big Smoke Las Vegas seminars were closed out with a pairing of a new Rocky Patel smoke and not one, but four, Dewar’s Scotch whiskies.

Just after noon, Cigar Aficionado senior features editor Jack Bettridge was joined by Rocky Patel of Rocky Patel Premium Cigars and Gabe Cardarella, the North American Whisky Ambassador for Dewar’s, for an exclusive pairing of the Rocky Patel DBS Toro and a quartet of  Dewar’s whiskies. This was the first tasting of the new Rocky Patel ‘DBS’ smoke, which is coming to the market in early December. The DBS stands for ‘Double Broadleaf Selection,’ as it features Pennsylvania broadleaf and broadleaf grown in Jamastran, Honduras, as well as a Mexican San Andrés wrapper.

The Dewar’s being poured consisted of the 12 Year Old, 15 Year Old, 18 Year Old and Double Double 21 Year Old Scotch whisky, which like the DBS included some newcomers to the lineup.

As Bettridge introduced the two gentlemen, the crowd began lighting up their DBS smokes as the Resorts World Las Vegas staff walked around and poured whisky number one, the Dewar’s 12 Year Old. While guests were trying the first pairing, Cardarella and Patel were sharing their deep wells of knowledge regarding the blending process for whiskey and cigars and the strong similarities between the two complex processes. Cardarella was a big bundle of energy and oozed passion with every word he spoke as he introduced the Dewar’s selection on-hand, which he says moves away from the traditional flavor of the Dewar’s White Label, the proverbial face of the brand. 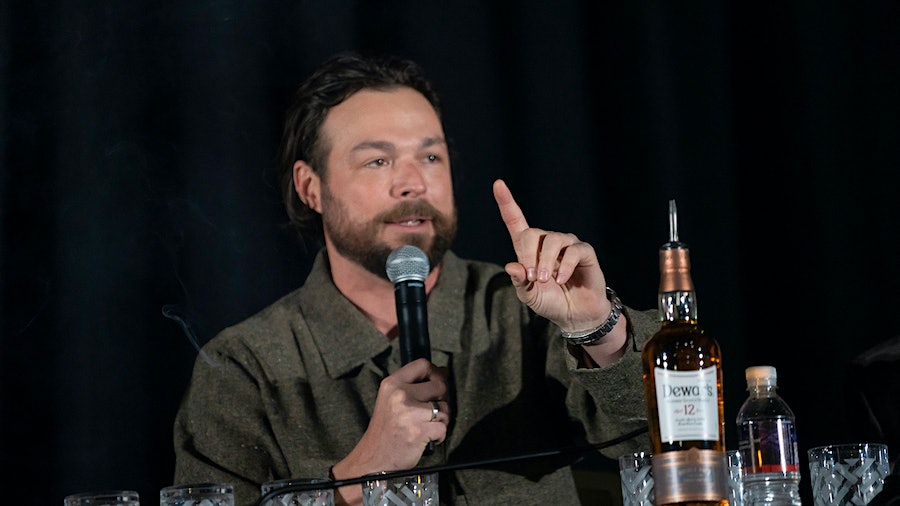 Cardarella dove deep into the blending and aging process, noting the importance of Scotland’s climate. “Scotland’s weather is incredibly ideal for making whisky that’s old without being overwhelmed,” said Cardarella. Patel reinforced this sentiment, pointing to the array of flavors different tobacco regions produce and the complex process of trying to blend various tobaccos together to make a flavorful, yet consistent cigar. “We’re not scientists, we’re blenders,” said Patel.

The 12 Year Old tasting served as a warm-up for the crowd, and a fine one at that. According to Cardarella, the audience at this seminar was the first to try the 12 Year Old besides in-house members, as they just recently reworked the blend. As Bettridge led the crowd into the next Scotch, the differences between blends and the unique relationship each formed with the DBS smoke started to become even more apparent, though each shared balance, complexity and smoothness, which Cardarella said is the main goal.

The Dewar’s 15 Year Old, introduced in 2014, targets Bourbon lovers. “The 15 Year bridges the gap between Bourbon and Scotch,” said Cardarella. The blend, he said, has a toned-down smokiness with a slightly sweeter flavor than your typical Scotch whisky. The 15 Year Old hung onto the palate longer than the 12 Year Old, but was a bit lighter in flavor.

The 18 Year Old, which Cardarella says is the most rewarded on their portfolio, is the one he prefers to give a taste of to those who don’t typically like Scotch. According to him, the 18 Year Old always wins that crowd over. The blend offers great complexity on the palate and evolves as you sip and linger with the flavors. “With this 18 Year Old you’re looking at something you can hang-out with,” said Cardarella. “Our master blender says this one tastes like barrel-aged crème brulée.” He then gave a shout out to the company’s master blender, Stephanie MacLeod, who is just the seventh person to hold that role with Dewar’s and one of the few females in such a position in the world. “If you guys look up the word ‘badass’ in whisky, Stephanie MacLeod shows up,” said Cardarella. He credits her with bringing innovation and consistency to the brand. 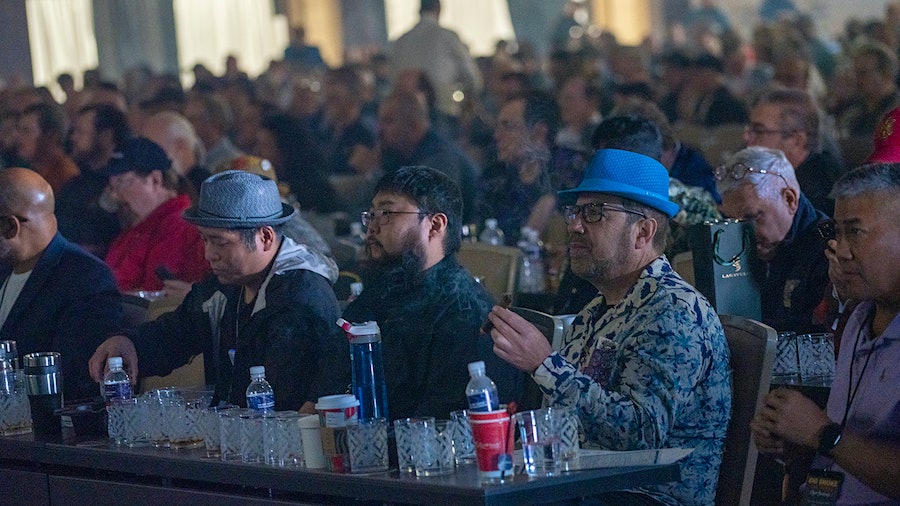 Big Smoke seminar guests smoking and sipping along with the panelists.

“This final whisky is something incredibly special,” said Cardarella, so excited he had to stand up to introduce the Dewar’s Double Double 21 Year Old. “You can see this dark dark red color and you can tell, unlike the others influenced by Bourbon casks, this one is influenced by the sherry cask.” Cardarella positioned this whisky as a great after dinner drink, something bolder but with a touch of sweetness. “Rich and decadent, that’s how I’d describe this whisky,” chimed Patel. Cardarella’s excitement was warranted, the 21 Year Old is highly acclaimed, earning the 2019 No. 2 Whisky of the Year from Whisky Advocate.

Each Dewar’s selection performed remarkably with the Rocky Patel DBS Toro, adding various layers of complexity to a strong, spicy and rich smoke that was the backbone of this seminar. Bettridge led a vote for each pairing, which seemed to generate no real consensus winner among the audience. Patel offered his appreciation and remarked on the never-ending journey the cigar industry offers. “This is my 26th year in the business, I’m still learning. But I enjoy it so much,” said Patel. Cardarella capped the seminar off with a room-wide toast and a big thanks, which generated some cheers from the audience, who, by then, were certainly grateful for the four whisky tastings and a fine cigar. The arrival of lunch was a welcomed occasion.