Expansion, brand recognition and vertical integration: these were the main talking points that Rocky Patel emphasized during his seminar at the Big Smoke Meets WhiskyFest at the Seminole Hard Rock Hotel & Casino in Hollywood, Florida this past Saturday morning.

“When I started, everything was very mild and linear. I wanted to make something with more character,” he told the crowd. “Maybe it was something from my Indian background with all the spices and everything.” Rocky continued by saying how much he loves to cook and takes pride in his palate, whether it’s tasting a dish he prepared or a cigar his company rolled.

“So how did you go from being a big, fancy Hollywood lawyer to becoming a cigarmaker?” managing editor Gregory Mottola joked with Patel. The now big-shot cigarmaker went on to talk about his time on movie sets with actors like Jean-Claude Van Damme, who has famously smoked cigars in films, and how that turned him onto handmade smokes. 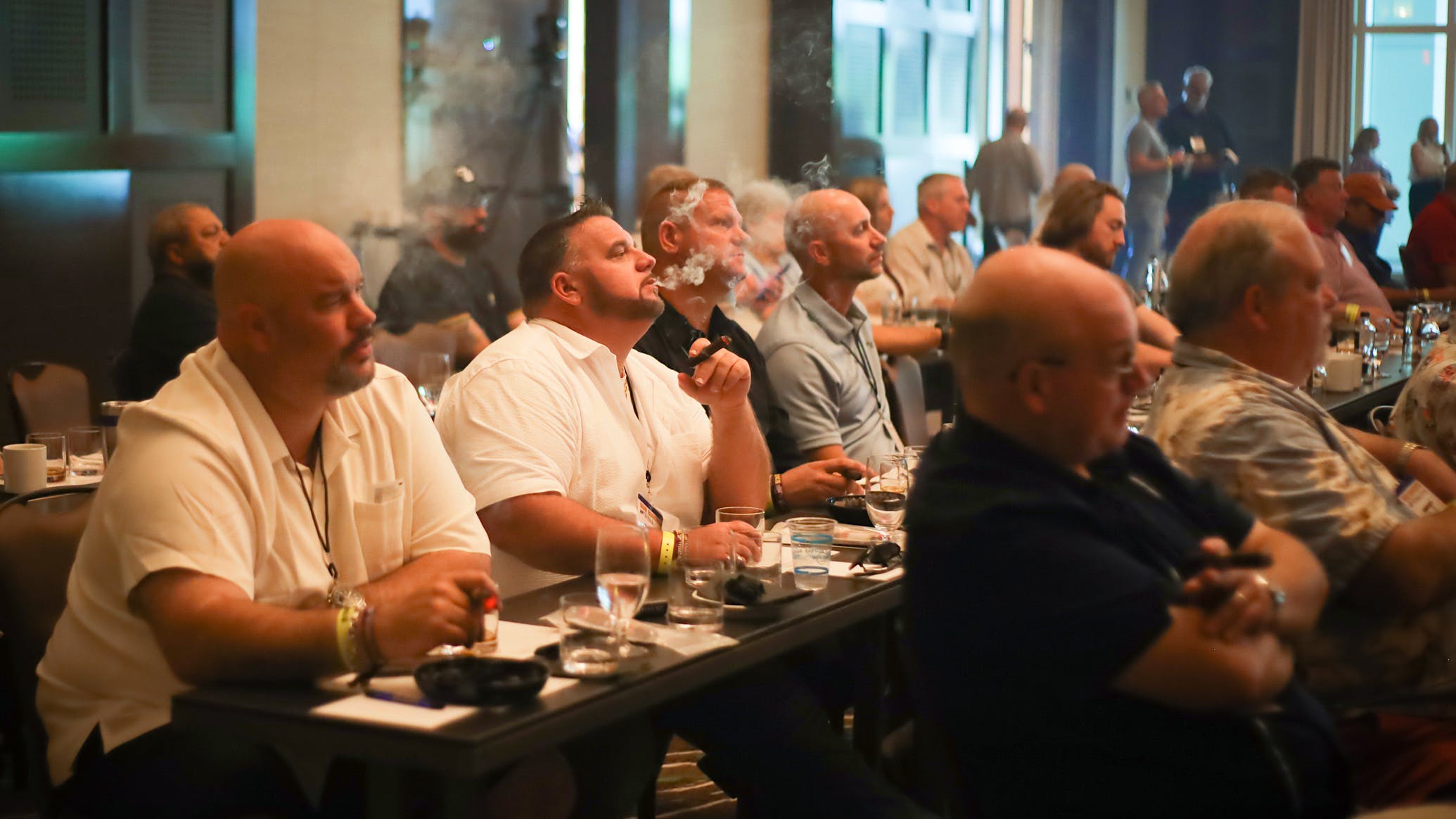 Cigar aficionados from around the United States and around the world light up during the Big Smoke Meets WhiskyFest seminars.

Patel also spent a lot of time talking about his background with the Plasencia family of Central America. They gave him the opportunity to create his own line of cigars in their Honduran factory, which is where he really broke into the industry.

“’Who the hell cares about Rocky Patel?’ they would say,” said Rocky, impersonating what an outsider would think about hearing such a new and unconventional name in the industry. Later Patel branched out and eventually put his own name on the cigar, and opened a second factory, this one owned entirely by his company, so he could finally control his own destiny.

The cigarmaker hammered home the notion that his company would utilize the strictest implementation and guidelines possible, in order to guarantee each cigar would be as similar in quality and color as the one next to it—referring to a box of his Rocky Patel Sixty (a cigar that each audience member had the chance to smoke) as a box of chocolate. He wanted each chocolate to look the same delicious brown as the rest. 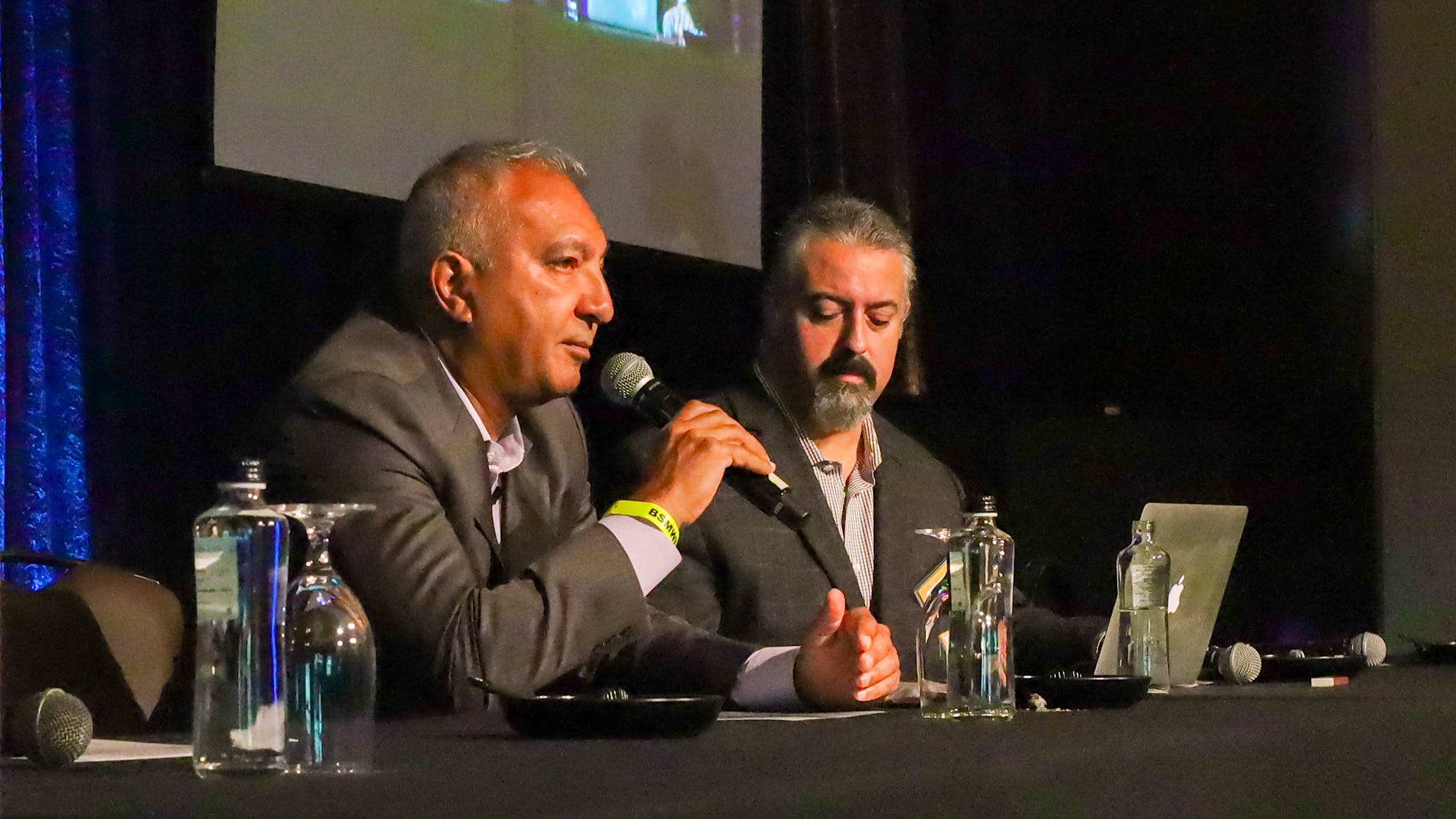 Rocky Patel and managing editor Gregory Mottola smoke a Rocky Patel Sixty while having an in depth conversation before the crowd.

“I love blending cigars,” he said, regardless if the tobacco is from Honduras, Nicaragua, the Dominican Republic or a place like Panama. “People thought I was crazy,” he said, at the notion of using Panamanian tobacco for the Edge. He even went into how he also used Broadleaf, a tobacco typically used as a wrapper, within the cigars themselves. Rocky said he and his workers would smoke new cigars for 10 days, trying and retrying 50 to 75 blends as they got better and worse.

Before taking questions from the audience, he also addressed any inconsistency in a cigar year over year: “Everyone expects the same cigars, but Mother Nature dictates itself, much like it does for a fine wine.”

One audience member’s “question” summed up the feeling of the seminars and the Big Smoke Meets WhiskyFest as a whole: “I just want to say ‘thank you.’ The Rocky Patel Vintage 1992 is the first cigar I ever bought.” Gratitude and appreciation for the art of handmade smokes were ever-present throughout the day.