The third seminar at Big Smoke Meets WhiskyFest showcased the cigars of Fuente. Gordon Mott, the senior contributing editor of Cigar Aficionado, and Carlos Fuente Jr., the maker of Fuente cigars, mounted the stage to great applause, the latter looking rather dashing with his white hat and pencil-thin mustache.

Before he got down to brass tacks, Fuente began with heartfelt words about what Cigar Aficionado has done for the cigar industry and how events such as Big Smokes allow him and his family to come face-to-face with the people who enjoy his cigars, a sentiment which felt all the more poignant in the aftermath of the lockdown. “If there’s anything at all this has taught me,” he said, “it’s not about cigars, it’s about people,” resulting in thunderous applause from the audience.

Arturo Fuente, Carlos Jr.’s grandfather, founded the company in 1912. During his time on stage, Fuente reflected on how things have changed over the years, principally about the shift in cigar wrappers. In the 1970s, cigars with Connecticut wrappers that were marketed as light and mild dominated the industry. Carlos Jr. grew up smoking and enjoying bolder cigars, and when his father sent him to Dominican Republic to learn about tobacco growing from Angel Oliva and his family, he tried to convince them to grow cigar wrappers from Cuban instead of Connecticut seed. 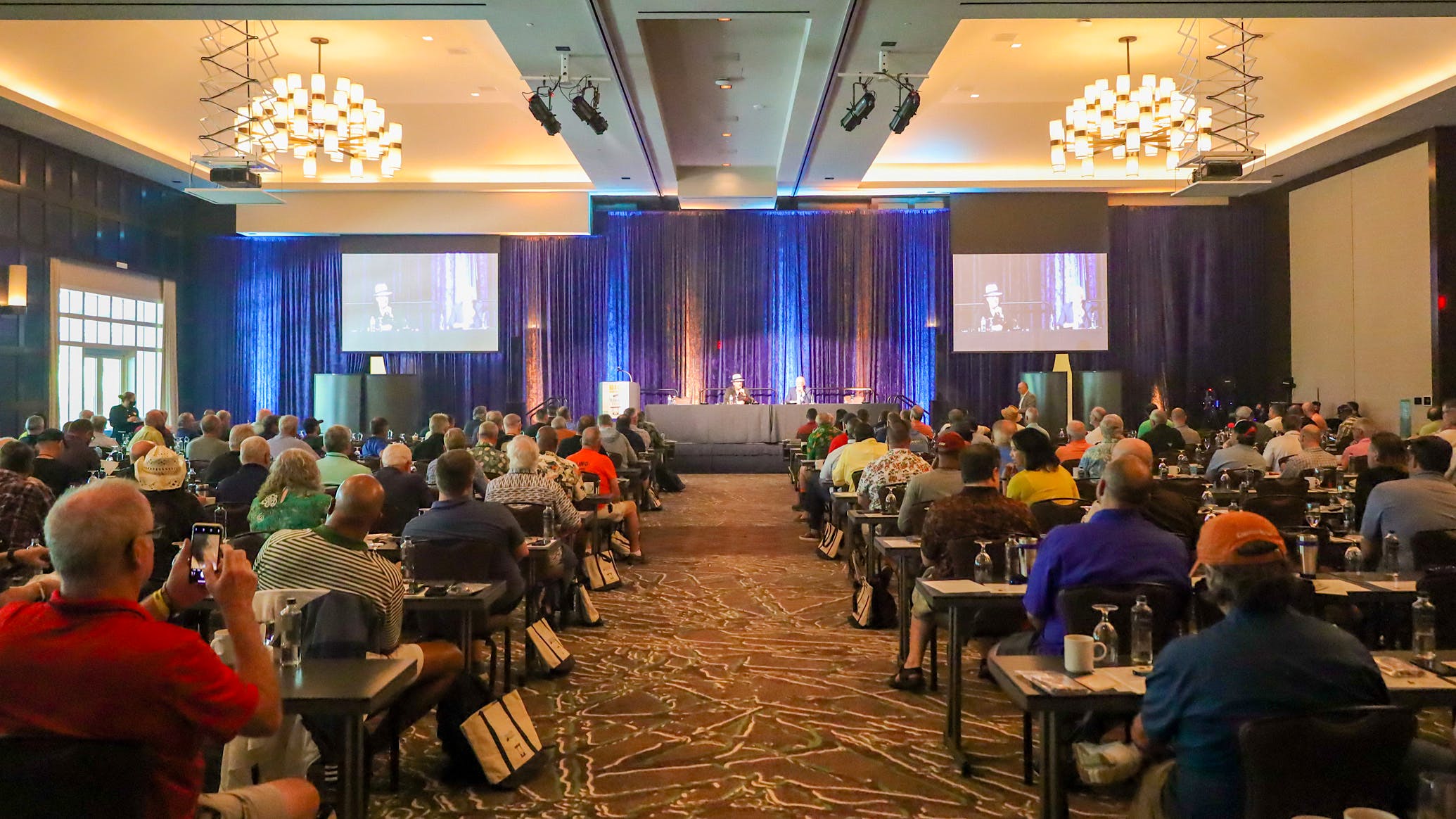 Fuente takes center stage under the spotlight while a packed audience listens and laughs along to the cigar idol’s intriguing stories.

The conversation inevitably turned to one of the most sought-after, yet elusive cigar brands in the cigar market: Fuente Fuente OpusX. Fuente spoke fondly and at great length of the difficult road to create that cigar, made with Cuban-seed wrappers grown under shade in the soil of the Dominican Republic. The challenges included floods and industry skepticism. But the end result spoke for itself. “It is noble tobacco,” he said of his OpusX wrapper. He even joked that when he visits the farms full of tobacco, the amount of pride he feels is akin to sitting in the waiting room as his children were born.

Fuente also reflected on his humble origins and his success in the Dominican Republic. “One of the things that motivated me: if I’m going to be a cigar producer, if I believe in my product, when I believe in the country that gave me an opportunity, not as an exile but as someone who came, an American, who came there to provide work and try to survive… but after being there and being treated the way I have been and continue to be treated, you have to be grateful.” 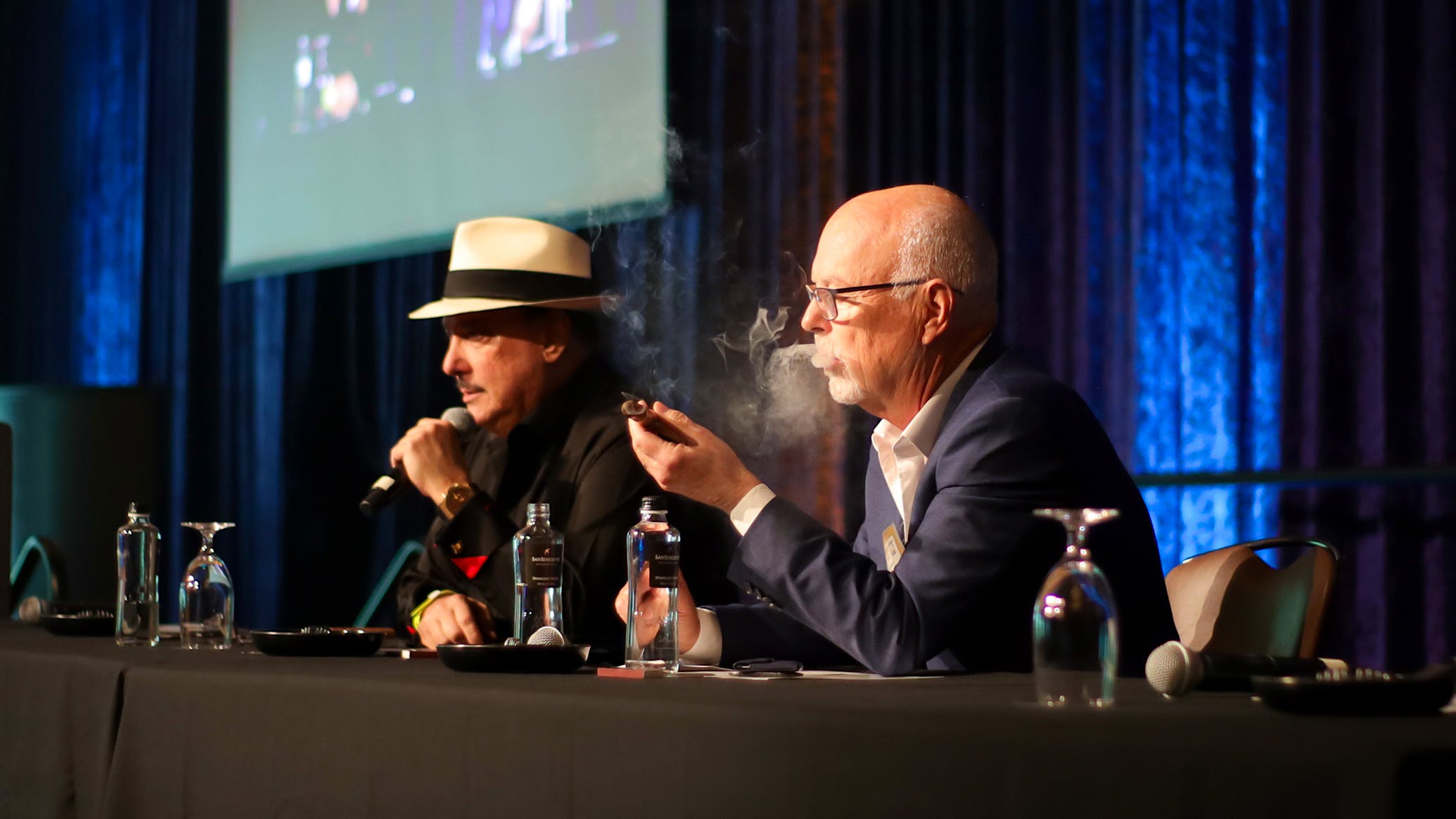 Carlos Fuente Jr. and Gordon Mott smoking Fuente cigars along with the audience.

This sense of gratitude extended to Fuente discussing teaming up with the Newman family to create the Cigar Family Charitable Foundation after seeing groups of children who would come to the Fuente farms hoping for work. Fuente wondered why these children weren’t in school and sought to bring education to the area by creating schools for these kids.

Among the highlights of the seminar was the grand debut of one of the two new sizes of the Arturo Fuente’s charity-driven Rare Pink line: The Sophisticated Hooker, a rather long perfecto. The cigar is currently unavailable to the market and those who attended were the first-ever consumers to try it. For the Rare Pink line, the company donates $13 of each box sale toward breast cancer research—a cause near and dear to the heart of Fuente’s daughter Liana. Though many eyebrows will be certainly raised, the name was inspired by a yacht he and a friend saw one day in Key West called The Sophisticated Hooker, and Fuente ever since wanted to create a cigar worthy of that name.