Share
Arturo Fuente, Padrón, Ashton, Davidoff and Rocky Patel (left to right) are among the best-selling cigar brands in America.

Cigar shop owners from across the United States have spoken: cigar sales are up, Arturo Fuente is the best-selling handmade brand, and their customers are more discerning and educated about cigars than ever before. Despite concerns over higher taxes, FDA regulations and Internet sales taking business away from brick-and-mortar stores, most cigar retailers are having a good year—and they’re optimistic about the future. These are the main takeaways from Cigar Insider’s 24th annual poll of cigar shops across America.

Our results are gleaned from 173 brick-and-mortar cigar shops from small towns and major cities all over the United States—from New York to California, Texas to North Dakota and everywhere in between. Nearly 69 percent of the retailers who took our poll said they were selling more cigars this year compared to last year. People are buying more cigars, and in response, a wave of premium smokes are pouring into the U.S. from Nicaragua, the Dominican Republic and Honduras. According to data from the Cigar Association of America, 362 million handmade cigars were imported into the United States last year, the most since 1997. This information speaks to the general health of the industry, and shows that demand for premium cigars remain strong. 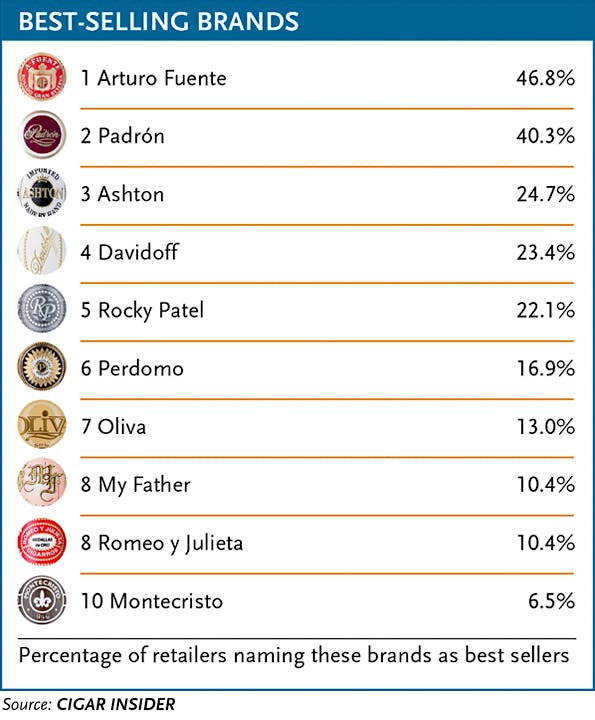 Arturo Fuente is a family-run operation headed by Carlos “Carlito” Fuente Jr., along with his sister Cynthia Fuente and his daughter Liana. The company is perhaps best known for its Fuente Fuente OpusX cigar line, heralded by cigar lovers for its powerful, sweet-and-spicy smoking characteristics and bemoaned for its rarity: Nearly 25 years after its initial release, the Dominican cigar still commands high prices at retail and tends to sell out quickly. The company’s OpusX Double Corona took home Cigar Aficionado’s No. 1 Cigar of the Year award in 2005.

Padrón, which ranked second in terms of sales, has earned a spot on Cigar Aficionado’s Top 25 list every year since its inception. The Padrón portfolio consists of high-end, Nicaraguan cigars such as Padrón 1964 Anniversary Series, Padrón Family Reserve and Padrón Serie 1926, as well as a more wallet-friendly core line that consumers commonly refer to as the company’s “brown label.” The company was started in 1964 by José Orlando Padrón, who passed in 2017. His son Jorge now leads the organization.

U.S. retailers once again named Ashton as the No. 3 best-selling cigar brand, the same position it held last year. All of Ashton Distributors’ Ashton-branded products are made at the Fuente factory in the Dominican Republic. Headquartered in Philadelphia, Ashton is run by Robert Levin, his son Sathya and daughter Meera. The company is known for its traditional cigar lines such as Ashton Classic and Ashton Virgin Sun Grown. The latter came to market in 1999. Ashton’s relevance and high sales numbers today are indicative of the brand’s quality and consistency.

More than 23 percent of cigar retailers said Davidoff was a best-selling brand. It took the fourth spot in our best-selling brands survey—a ranking it also secured last year. Davidoff positions itself as a luxury cigar company, and its portfolio of high-end products includes lines such as Davidoff Millennium, Grand Cru, Signature and Aniversario, cigars that fall under the company’s “white label” series, so called because of the bands that adorn each cigar. Starting in 2013, the company expanded its offerings with a range of “black label” cigars, which has grown to include Davidoff Nicaragua, Davidoff Yamasá and Davidoff Escurio. The Swiss-company rolls all its Davidoff-branded products in the Dominican Republic.

Rocky Patel ranked fifth, named by more than 22 percent of shop owners, up from 11.6 percent last year. The company’s upward trajectory can be attributed to its wide range of quality products and the tireless promotional efforts of brand owner Rocky Patel, his brother Nish and cousin Nimish. The Rocky Patel 15th Anniversary Toro (Tubo) was on Cigar Aficionado’s Top 25 list last year. The company makes its cigars in both Honduras and Nicaragua.

Perdomo cigars, which are made by brand owner Nick Perdomo in Estelí, Nicaragua, moved up from the No. 8 spot in 2018 to No. 6 this year. Oliva Cigars, which held the No. 7 spot last year, has retained its position as the seventh best-selling brand. Oliva is rapidly expanding as the company recently opened up a second cigar factory in Estelí, Nicaragua, called Tabolisa II, to focus on production of lighter-hued cigars, such as Oliva Connecticut Reserve. The company is owned by Belgium cigarmaker J. Cortès Cigars N.V., which acquired Oliva in 2016. 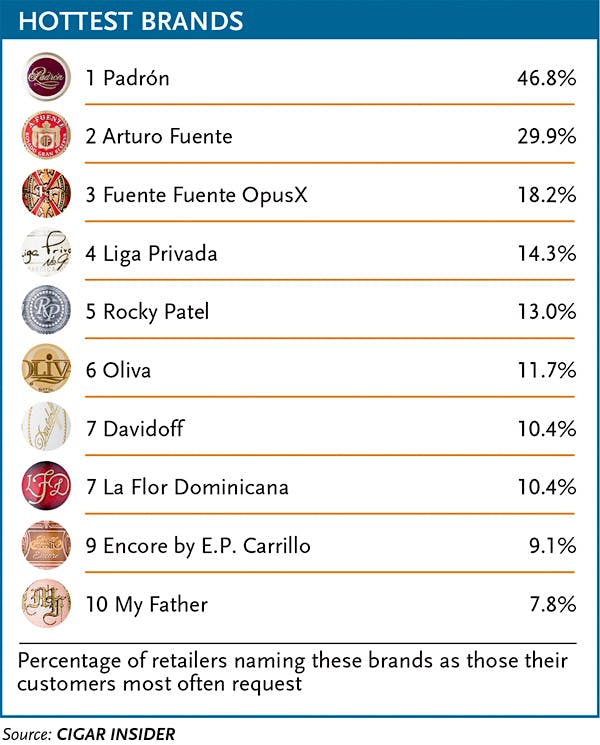 Our survey also covered the hottest brands of 2019—a separate list from the best sellers, where retailers are asked to identify the cigars that customers most often request (but can’t necessarily obtain). In this category, Padrón and Arturo Fuente swapped places: Padrón is the No. 1 requested cigar in the United States, followed by Arturo Fuente and its ultra-premium sub-brand, the elusive Fuente Fuente OpusX.

Liga Privada from Drew Estate ranked No. 4, with 14.3 percent of retailers saying the brand is one of the hottest on the market. Drew Estate launched Liga Privada in 2007 and the cigar quickly became a smash hit for the company. Based on its success, Drew Estate added subsequent lines such as Liga Privada T52 and Liga Privada Único Serie, a collection of limited-production Liga cigars rolled in special sizes and blends.

Rocky Patel remains in demand as the fifth most-requested cigar brand, followed by Oliva at No. 6, with Davidoff and La Flor Dominicana both tied for 7th place.

La Flor Dominicana, made in the Dominican Republic by brand owner Litto Gomez, commanded the No. 3 hottest brand spot last year. At the time, the brand was buoyed by Andalusian Bull taking Cigar Aficionado’s Cigar of the Year award in 2016—but the current reigning Cigar of the Year winner, the E.P. Carrillo Encore Majestic may have taken some wind from its sails.

Encore appears for the first time ever on our hottest brands list this year as the 9th most requested cigar. It’s rolled from a blend of all Nicaraguan tobacco and made in the Dominican Republic at brand owner Ernesto Perez-Carrillo’s factory. The No. 10 spot on this year’s hottest brands poll belongs to My Father Cigars, which also may have seen a halo effect from its strong Top 25 showing. The company had the No. 2 cigar on our Top 25 last year, the My Father La Opulencia Toro, and has won Cigar of the Year two times.

When it comes to cigar sizes, our poll clearly shows that America still has an appetite for thicker ring gauge cigars. In line with last year’s results, robustos continue to be the best-selling size at retail. Toros (which are also called corona gordas), came in second with grandes (very fat cigars with 60 ring gauge or higher) landing at third. The long and stately Churchill came in at No. 4, with figurados and coronas tied at No. 5. 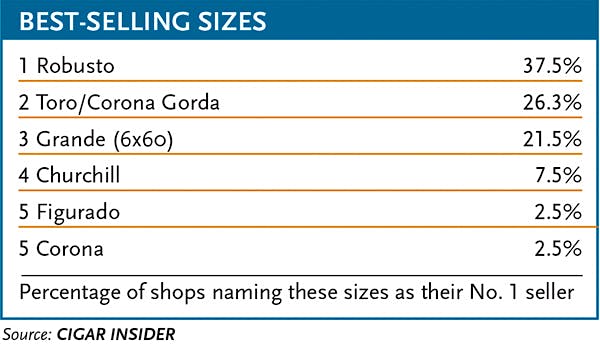 Cigar retailers also gave their thoughts on the annual IPCPR trade show, which is being renamed the PCA. More than 70 percent of the people who answered our survey told Cigar Insider that a cigar shop owner, or one of their representatives, planned on attending the show. Those who said they were not attending noted that the expense of the show was the biggest factor for missing out, followed by the timing. Last year’s trade show took place in mid-July. This year, it starts at the end of June.

We also asked retailers if the FDA’s regulation of premium cigars impacted their business. Most respondents have not yet seen a dramatic affect on their livelihood—but they’re aware more changes are coming—and have noticed that a large amount of cigar manufacturers have increased prices to offset the higher cost of doing business.

Even with these hurdles, cigar retailers still find reasons to celebrate. Along with higher sales numbers this year, many retailers are pleased to report a variety of new, interested cigar smokers walking through their doors. “Lots of Millennials discovering and enjoying the cigar life,” says Jeff Borysiewicz, president of Corona Cigar Co., who owns four Florida locations in Orlando, Lake Mary and Tampa.

“There are a lot of new people just getting into cigars,” says Russell Wilder, owner of Top Shelf Cigar & Tobacco Shoppe in Augusta, Georgia. He sees an expanding audience of new customers. Craig Cass, owner of four Tinder Box locations in North Carolina and one in South Carolina, says he has observed a broadening demographic of people enjoying cigars at his locations. “It is refreshing to see new faces,” he says. “I find most consumers welcome education and are receptive to recommendations.”

Our retailer poll indicates that today’s cigar consumers have discerning tastes and are willing to spend more money on quality cigars—another good sign for tobacconists everywhere.

Besim Cukaj, owner of Besim’s Fine Cigars in Southampton, New York, says that today’s cigar customer is “looking for quality, and willing to spend more than they did during the past decade.” Luis Molina, general manager at Habana Port Cigar Merchants, who oversees retail locations in both Metairie and Baton Rouge, Louisiana might agree with Mr. Cukaj. He says that the modern consumer is “looking for value. Price is not necessarily an issue but value is very relevant.”

“Consumers are more educated than ever,” says Michael Herklots, vice president of Nat Sherman International, who oversees the Nat Sherman Townhouse in Manhattan, New York. “They make decisions with tremendous discretion.” He notes that today’s customers want quality and refinement. “There is clearly continued and growing interest in cigars that are balanced. Flavor is more important than strength. The days of face-melting bombs are over.”