Share
More than 500 people, ready to roll their own cigars with Ventura Cigar Co.

You will probably gain a new appreciation for cigars if you go to a factory and see how they’re made. But you’ll undoubtedly have a deep-seated respect and admiration for cigar rollers if you try to roll a cigar yourself. This, of course, was the purpose of the self-explanatory seminar dubbed Roll Your Own, a perennial Big Smoke seminar favorite that gives everyone in the audience a chance to try their hand at constructing a handmade cigar. The best of the best won prizes. Even the worst won prizes as sort of a Razzie Award for lousiest roller, but one thing was constant no matter the skill level—everyone had fun. While working, they puffed on Archetype and Psyko Seven Nicaragua cigars from Ventura.

Hosting the seminar was Michael Giannini, general manager of Ventura Cigar Co., along with Indiana Ortez, a young Nicaraguan cigarmaker for Agrotabacos who has been collaborating with Ventura since 2018. Ortez was up on the dais as the expert roller in the room, and a camera focused on her workstation, projecting the video onto large screens to show the audience proper form and technique as she deftly cut a piece of wrapper tobacco and applied it to a cigar in one flawless motion.

Everybody attending the seminar was given a small plastic mat to serve as a rolling table, a piece of wrapper tobacco, a razor blade and a bit of odorless, flavorless vegetable glue. They were also given a cigar that was missing its wrapper—the combination of filler and binder leaves known as a bunch in a cigar factory. Each participant was tasked with cutting the wrapper leaf to size and applying it properly. 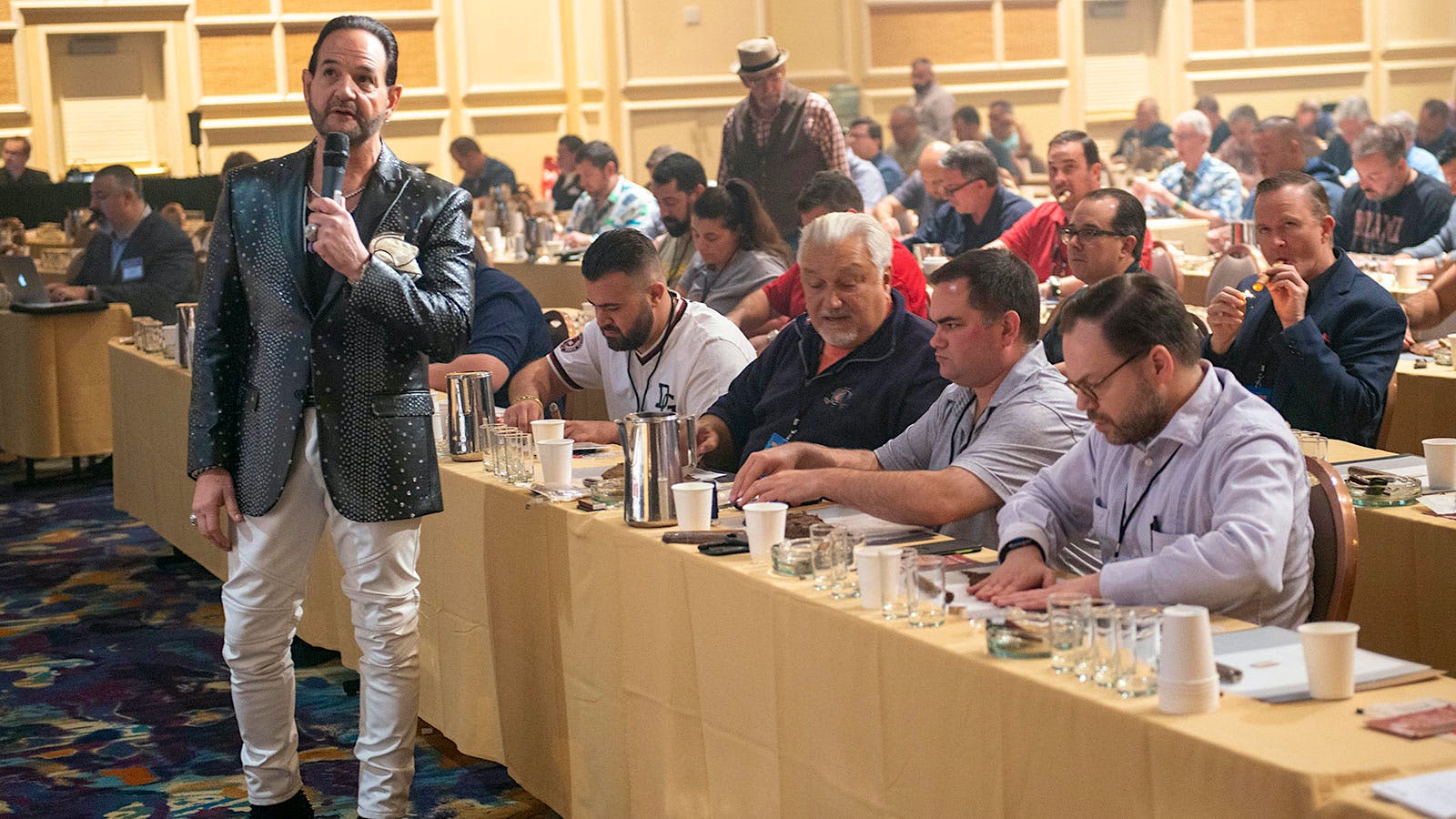 Michael Giannini of Ventura Cigar Co., instructing the crowd on how to roll their own cigars.

When rolling properly, the idea is to get the wrapper onto the cigar as tightly as possible without tearing it. That’s done by stretching the tobacco leaf and keeping it taught on the table as you roll. Then, a bit of vegetable glue is applied to the head before twisting the wrapper to a pigtail cap and slicing off any excess tobacco. 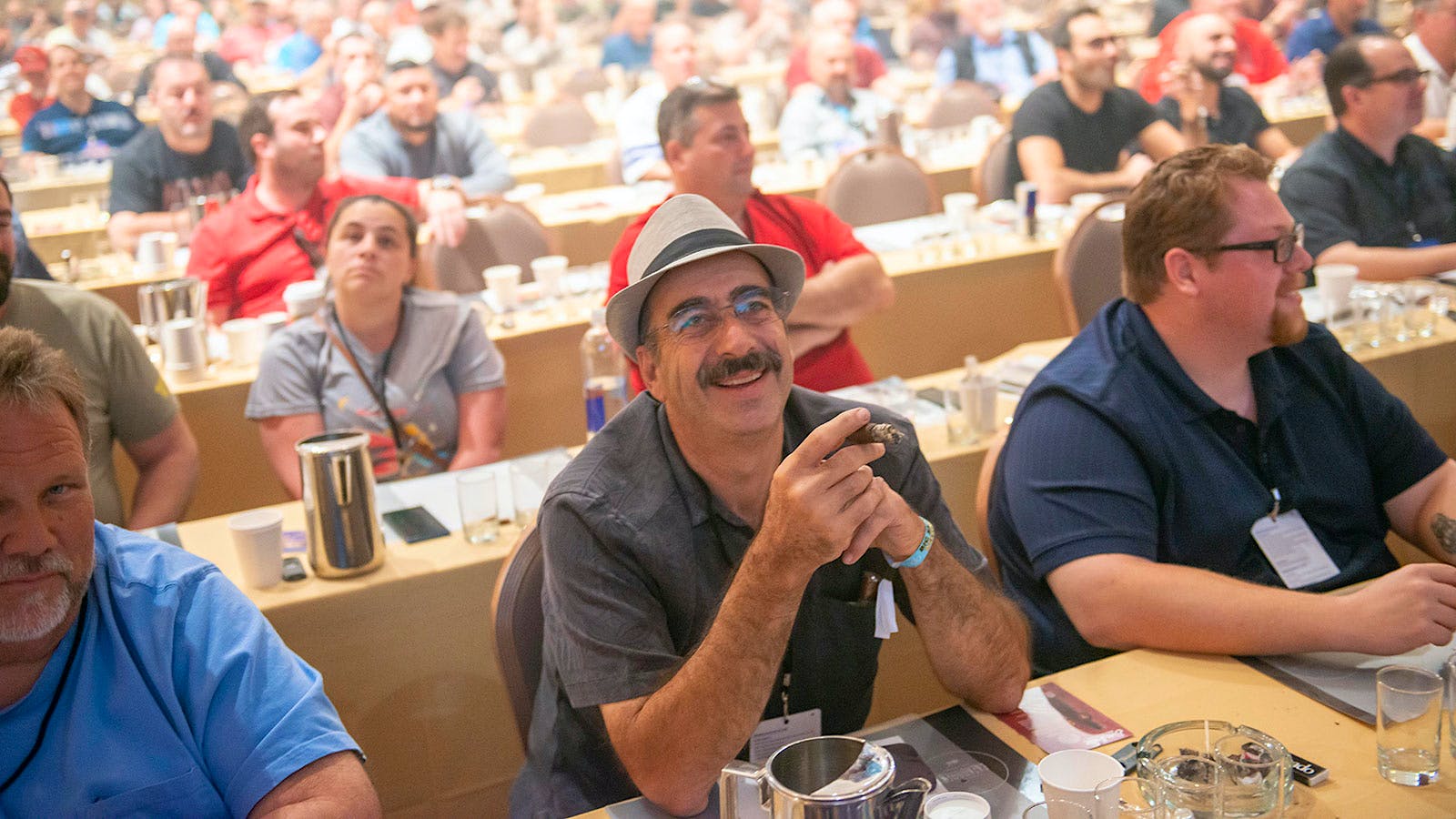 Making cigars with a smile at the Big Smoke.

Up on screen, Ortez performed these steps fluidly and flawlessly. In the audience, most weren’t as skilled.

“If you made this in our factory, you’d be asked to leave,” joked Giannini as he walked around the room. Making fun of poorly made cigars has always been part of the Roll Your Own seminar. It may sound like some puritanical form of cigar shaming, but the good-natured insults are all part of the tradition and always fill the room with laughter.

Anyone who thought their cigar was well rolled had the opportunity to enter it in a contest, which is also a Roll Your Own tradition. Giannini and Ortez judged the entrants. There were prizes for the worst rolled (a box of cigars and a hat), prizes for the most creative and even the most bizarre. 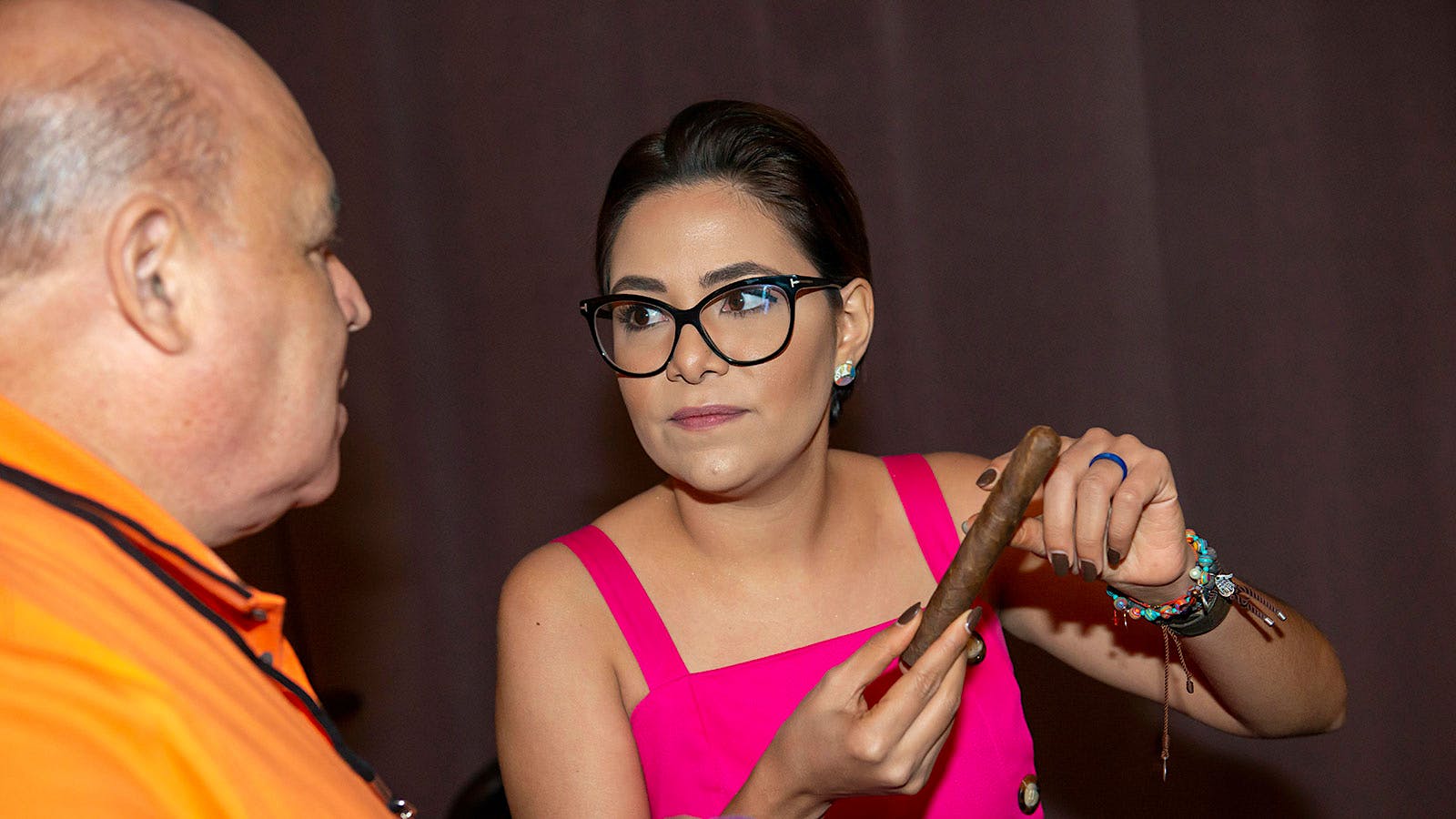 Indiana Ortez showing off the proper way to roll a cigar.

The criteria for winning the grand prize, however, was three-fold: The wrapper had to show three seams across the cigar (no more, no less); the wrapper had to be wrinkle-free and adhere tightly to the bunch; and the head had to have a neatly twisted pigtail cap.

In the end, the best cigar was rolled by Fletcher Wells of Maryland Heights, Missouri, a now five-time winner of the Roll Your Own contest. He took home a grand prize that amounted to more than 150 Ventura cigars.

And before the audience members could light up the next smoke, their makeshift cigar-rolling workstations were quickly converted into drink stations. The mats and razor blades turned into four glasses filled with Tequila and mezcal. The Big Smoke was approaching its boozy end as the final seminar on spirits was about to begin.