Share
Inside the sold-out room at the Saturday seminars. The day featured the top three cigars of 2018.

It's a dream come true for cigar fans—to walk into a room and receive three of the year’s most sought-after cigars. To sit and listen to the talented men and women who make each cigar talk about their creations. To light up and puff along with them.

That’s the idea behind Big Smoke’s Top Three Cigars tasting. Some 550 cigar fans from around the United States and all over the world packed the convention center at the Mirage Hotel and Casino in Las Vegas last weekend to attend educational seminars and taste the top cigars from Cigar Aficionado’s most recent Top 25 list. The smokes came from the hands of three heavy-hitting cigar companies: EP Carrillo Cigar Co., My Father Cigars and Foundation Cigar Co.

The winning cigars last year were The Wise Man Maduro Robusto, at number three; My Father La Opulencia Toro, at number two; and the E.P. Carrillo Encore Majestic, a Dominican-made masterpiece that won Cigar of the Year. 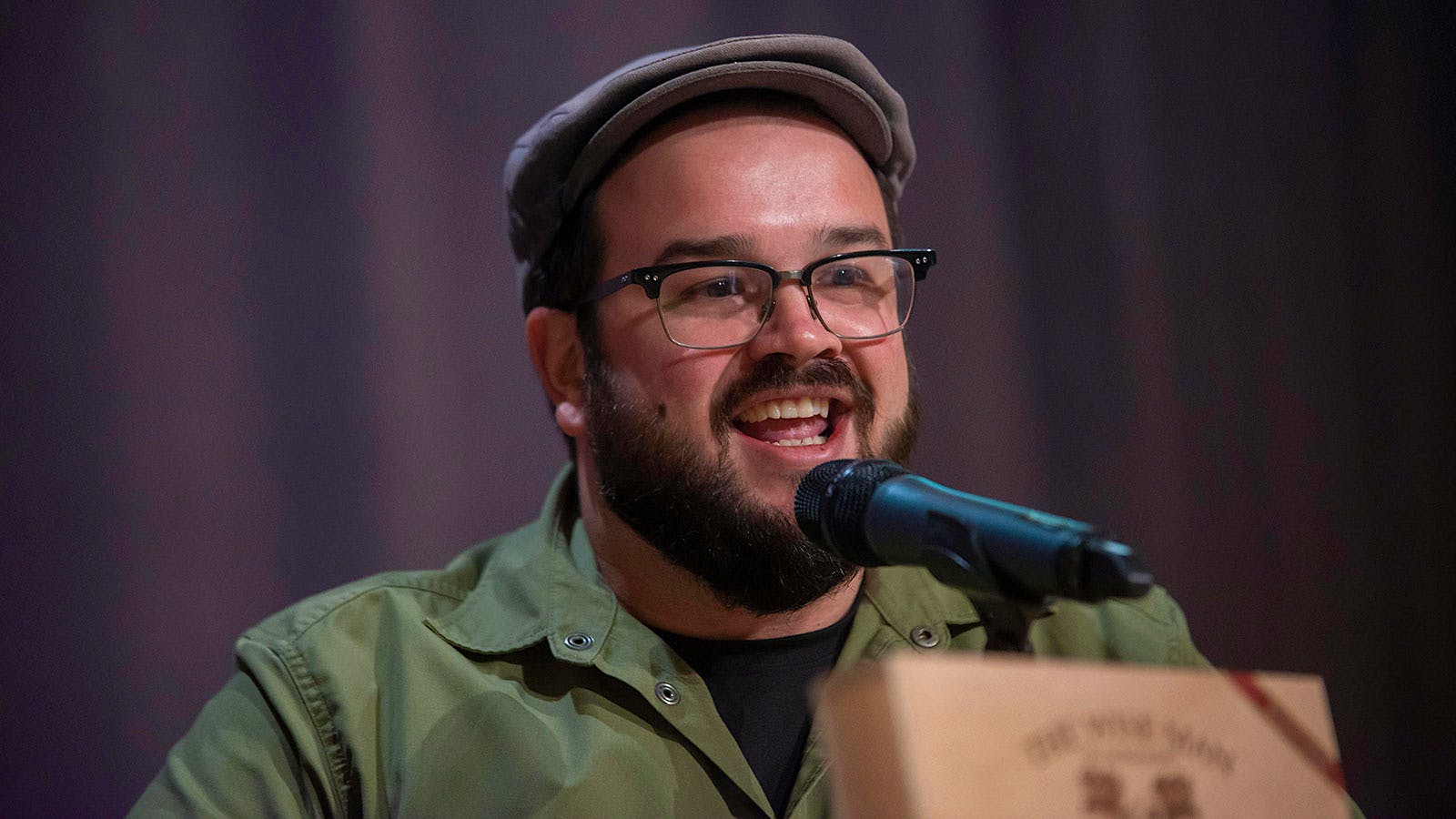 Big Smoke guests who attended the Saturday seminars received all three cigars in a humidified Boveda bag. As happy smokers took their seats in the convention center, Cigar Aficionado executive editor David Savona welcomed the audience and encouraged them to light up Foundation’s The Wise Man Maduro Robusto.

“Now it’s time to light up. Foundation has only been around since 2015, but it’s really made a mark. Its cigar is our number three Cigar of the Year. We’re going to smoke that right now. The Wise Man Maduro Robusto, which scored 95 Points.”

Across the room you could hear the sweep of hundreds of wooden matches striking and bursting into flame. Puffs of smoke began to appear as the audience lit up the Wise Man Maduro Robusto and brand owner Nick Melillo took to the stage.

“In creating this cigar, I wanted to portray to connoisseurs and cigar lovers what Nicaragua has meant to me. It’s my second home. And you see that in The Wise Man,” Melillo said. “Originally, the Wise Man was called El Güegüense—it's a Nicaraguan word, not a Spanish word—and it’s really the cultural identity of Nicaragua. It's a [theatrical] dance that’s taken place since the late 1500’s, the oldest indigenous satire of the western hemisphere. It’s as important [to the cigar] as the tobacco. The original El Güegüense was an all Nicaraguan blend. And I knew I wanted to do a maduro version of that.”

He explained how he traveled to San Andrés, Mexico, to find the perfect wrapper leaf for the project.

Melillo went on to discuss the differences between working in a large factory versus running a boutique operation and left the stage to a round of spirited applause. A panel discussion on powerful ligero tobacco took place afterward. Upon its completion, Savona invited guests to cut and light the number two cigar of 2018, the My Father La Opulencia Toro. 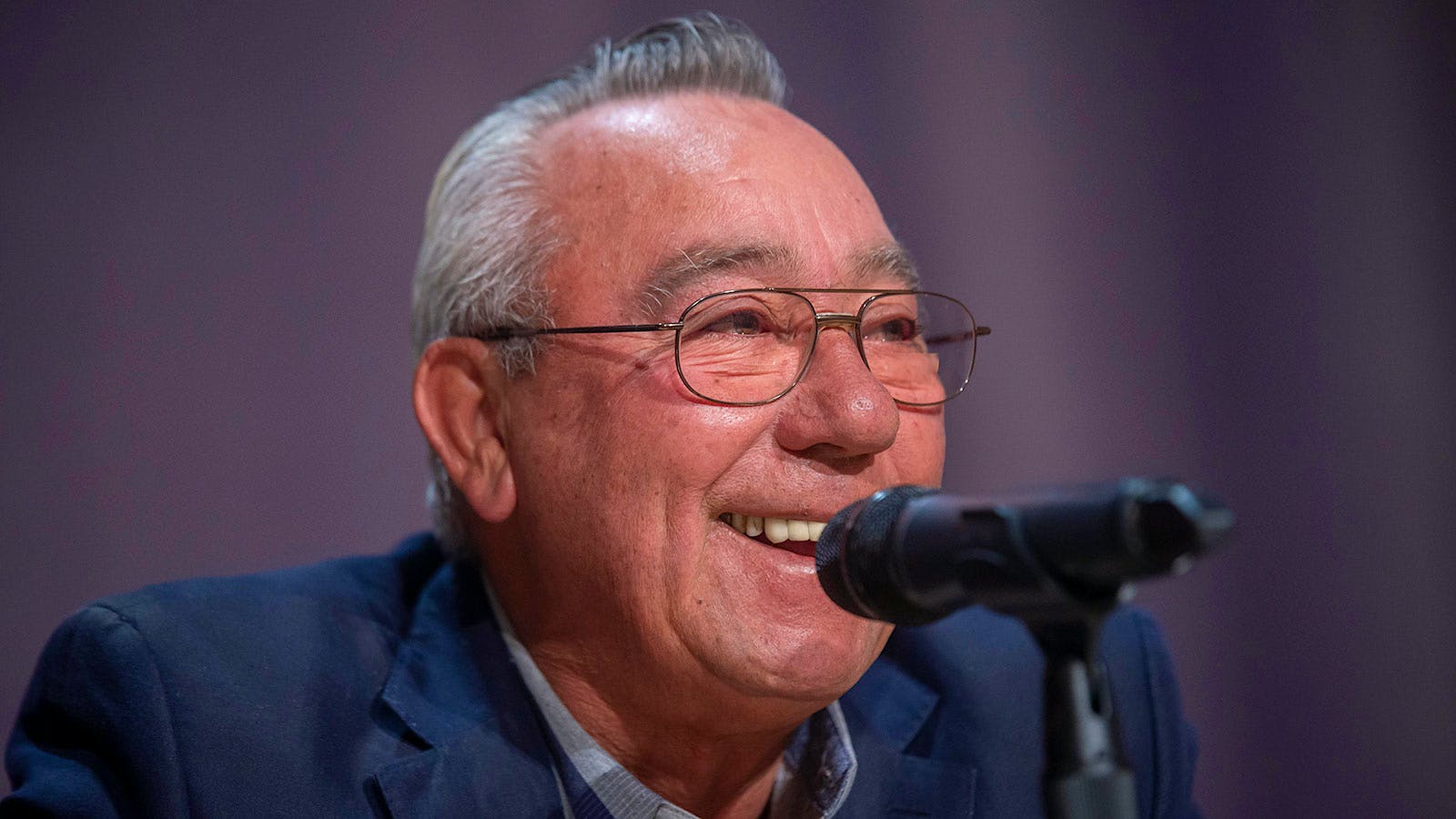 Pepin Garcia, patriarch of My Father Cigars. The Garcias spoke about the My Father La Opulencia Toro, the No. 2 cigar of the year.

The room filled with the pleasant aromas of burning tobaccos and José “Pepin” Garcia, Jaime Garcia and José Ortega of My Father Cigars rose to the podium to explain the origins of their standout smoke.

“La Opulencia is an old Cuban brand, which was made around 1897 in Havana, Cuba,” Ortega said. “Opulencia, for those who may not know, means richness and abundance. The reason why we chose the name of this cigar is because it’s abundant in different types of tobacco. It has Criollo and Corojo binders that are blended with Criollo, Corojo and Habano fillers, all coming from farms that are owned by the Garcia family. The cigar is finished with a beautiful, dark, Mexican San Andrés Rosado Oscuro wrapper.”

Speaking on behalf of the Garcias, Ortega explained to the audience the importance of wrapper leaf, the process of blending tobacco and the allure of box-pressed cigars. They left the stage to thunderous applause and a panel discussion on investing in Cuban cigars began. When the seminar concluded, Savona introduced the Cigar of the Year and its creator, the storied Ernesto Perez-Carrillo. 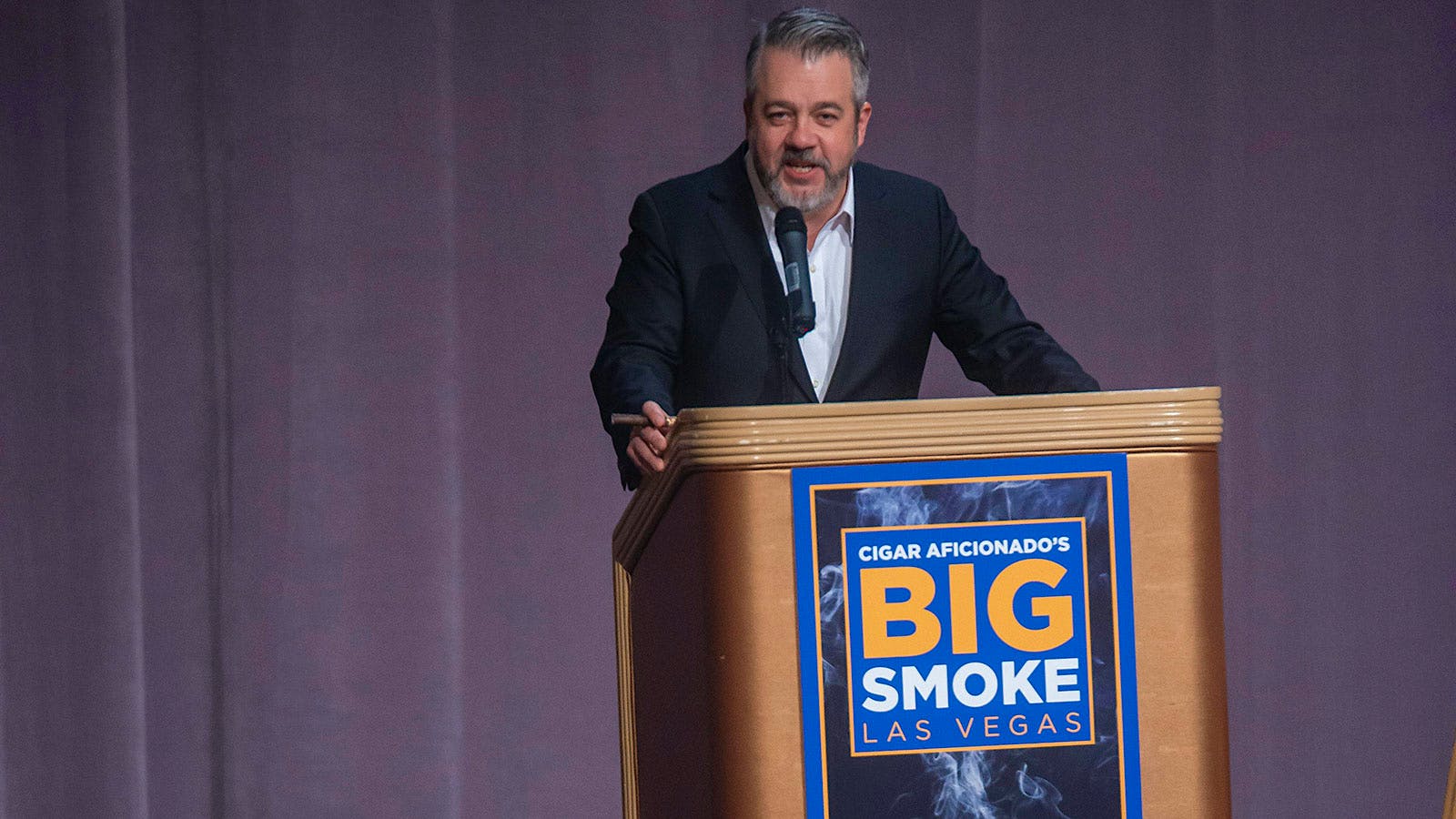 “Ernesto has been making cigars for 49 years,” Savona said. “He first worked alongside his father in a tiny factory in Miami, making a brand called La Gloria Cubana. Ernesto eventually sold La Gloria, and worked for a time with the company that acquired it. He left that company a few years after.”

“Go forward to 2009," continued Savona. "Ernesto joined with his children in forming a new venture called EP Carrillo Cigar Co. He opened a new factory in the Dominican Republic. He began crafting new cigar blends and he was off to the races."

A sea of cigar cutters emerged and the audience lit up the E.P. Carrillo Encore Majestic. The ceiling was now a hazy blue cloud of smoke as Perez-Carrillo and his daughter Lissette approached the stage.

“For the past 15 years, it has been my goal to one day stand here and accept the award for number one Cigar of the Year,” Perez-Carrillo said. “Our hard work has paid off.” 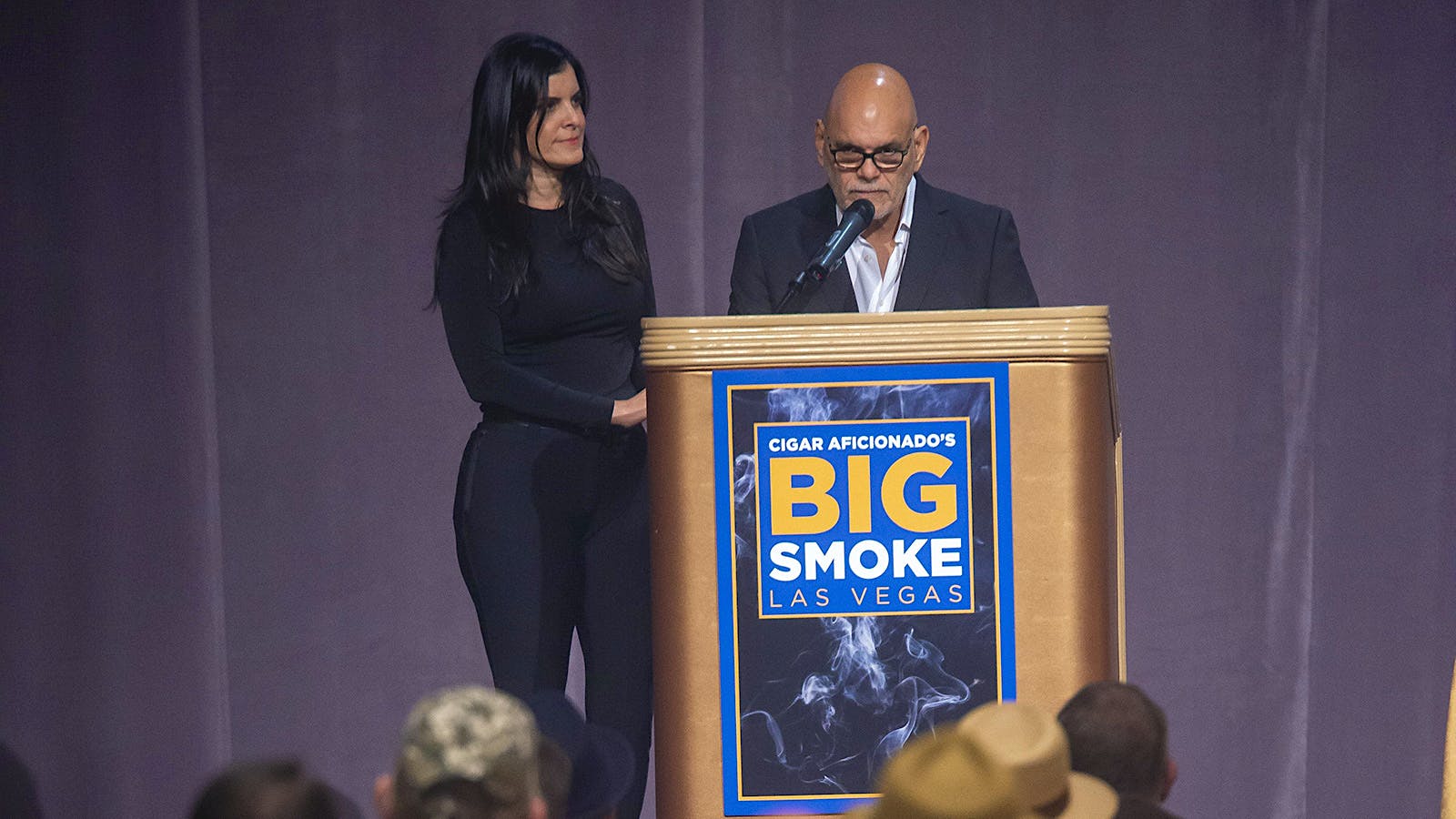 He went on to explain that the origin of the Encore brand, a cigar made entirely with Nicaraguan tobaccos, could be traced back to an earlier line called La Historia.

“La Historia is a blend of Mexican San Andrés wrapper, Ecuador binder and Nicaraguan fillers,” Perez-Carrillo said. “It became a huge success for us in 2014 when the E-III got the number two Cigar of the Year. A year later, Lissette started working on Encore packaging. When she finished, she asked me to make another blend that would rival La Historia. That was not an easy task.”

“I decided on a blend using Nicaraguan tobaccos from the farms of three of the most prestigious families in the industry: the Placencias; David Perez of ASP [Enterprises Inc.]; and my brother, Gilberto Oliva. From the very first roll, I knew I had a cigar that spoke the same language of La Historia. And a cigar that had the possibility of getting the number one spot in Cigar Aficionado.”

Perez-Carrillo closed out his seminar by reflecting on his family’s past, present and future, and thanking the audience for their time. He left the stage to a standing ovation, which led seamlessly into the next panel, a discussion with prominent women in the cigar industry.