Share
Lunch is served. The food was a hybrid of Cuban and Nicaraguan cuisine, with red wine by Rodney Strong.

After a morning filled with educational seminars and no shortage of fine cigars, it was only fitting that the Big Smoke audience got the chance to fill up their stomachs with a hearty lunch. The crowd moved into a new ballroom, and each of them were handed Plasencia Alma del Campo cigars to smoke later in the day. They sat down at the lunch tables, ready to recharge and be entertained.

This year’s Big Smoke Saturday Seminar lunch session was sponsored by Plasencia Cigars and led by owner Nestor Andrés Plasencia, who welcomed the crowd to the room. And while the audience was starting on their first course—a mixed green salad with Vigorón, topped by a cilantro-citrus vinaigrette—they noticed something different on stage. A trio of podiums were arranged for contestants in a game show. This was a Cigar Aficionado Big Smoke first, a cigar quiz show that would take place after the meal.

As waiters filled the glasses with Rodney Strong Kings Valley 2016 cabernet, it was time for the main course, which Plasencia explained had a theme: mixing the cuisines of Cuba and Nicaragua, befitting Plasencia’s heritage. He is Cuban and Nicaraguan. The meal was a big one, but appropriate for a room filled with cigar lovers who had been spending their morning hours puffing on cigars. They tucked into chimichurri-marinated, grass-fed skirt steak with a thick yuca mash and gallo pinto, the mixture of black beans and rice that some call moros y cristianos. The dish was accented with a habanero demi-glace, served with baby carrots and a crispy plantain chip on the side. The dessert was a coconut tres leches cake with mixed berries. 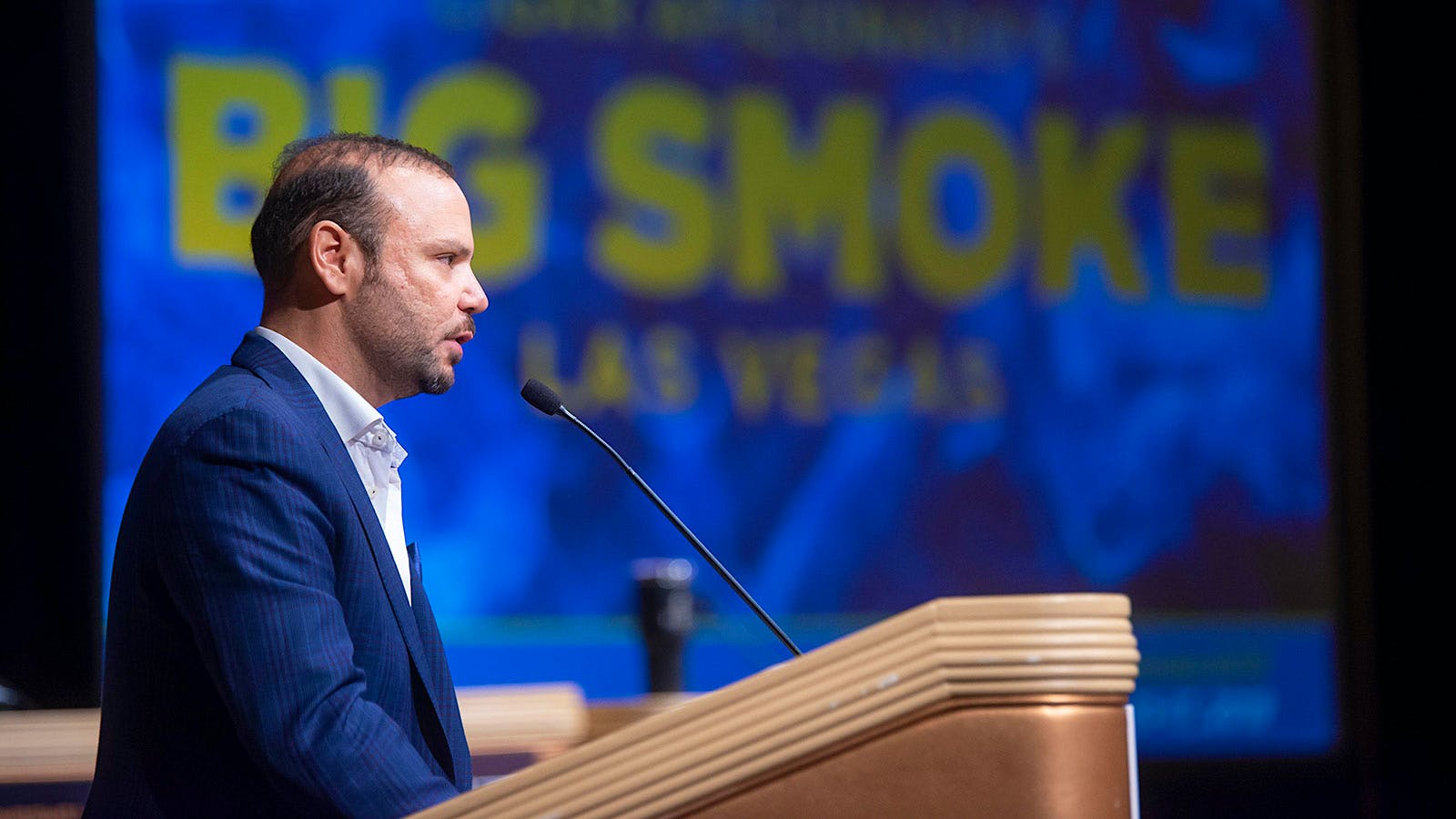 A video played about Plasencia Cigars, showing the company’s extensive operations in Central America—Plasencia grows 3,000 acres of tobacco in Honduras and Nicaragua, and rolls 45 million cigars a year. Plasencia returned to the stage, and announced the winners of the random drawing who came up to the stage to compete in the cigar game show: Frank Kohler from Scottsdale, Arizona, John McManus from Arlington, Virginia and Charles Maurer from Springfield, Missouri. Cigar Aficionado’s David Savona joined them on stage, serving as host for the game show, and the large screen behind them was set up with categories and dollar values. It was time to test the knowledge of the contestants.

A few questions did stump the panel. The type of cigar made with a mix of short and long filler—a Cuban sandwich—went unanswered, as did the long strip of cedar used to light a cigar with elegance, a cedar spill. But Savona was clearly impressed by the knowledge of the contestants. “These guys are doing a great job, aren’t they?” he asked, and the crowd answered with hearty applause. 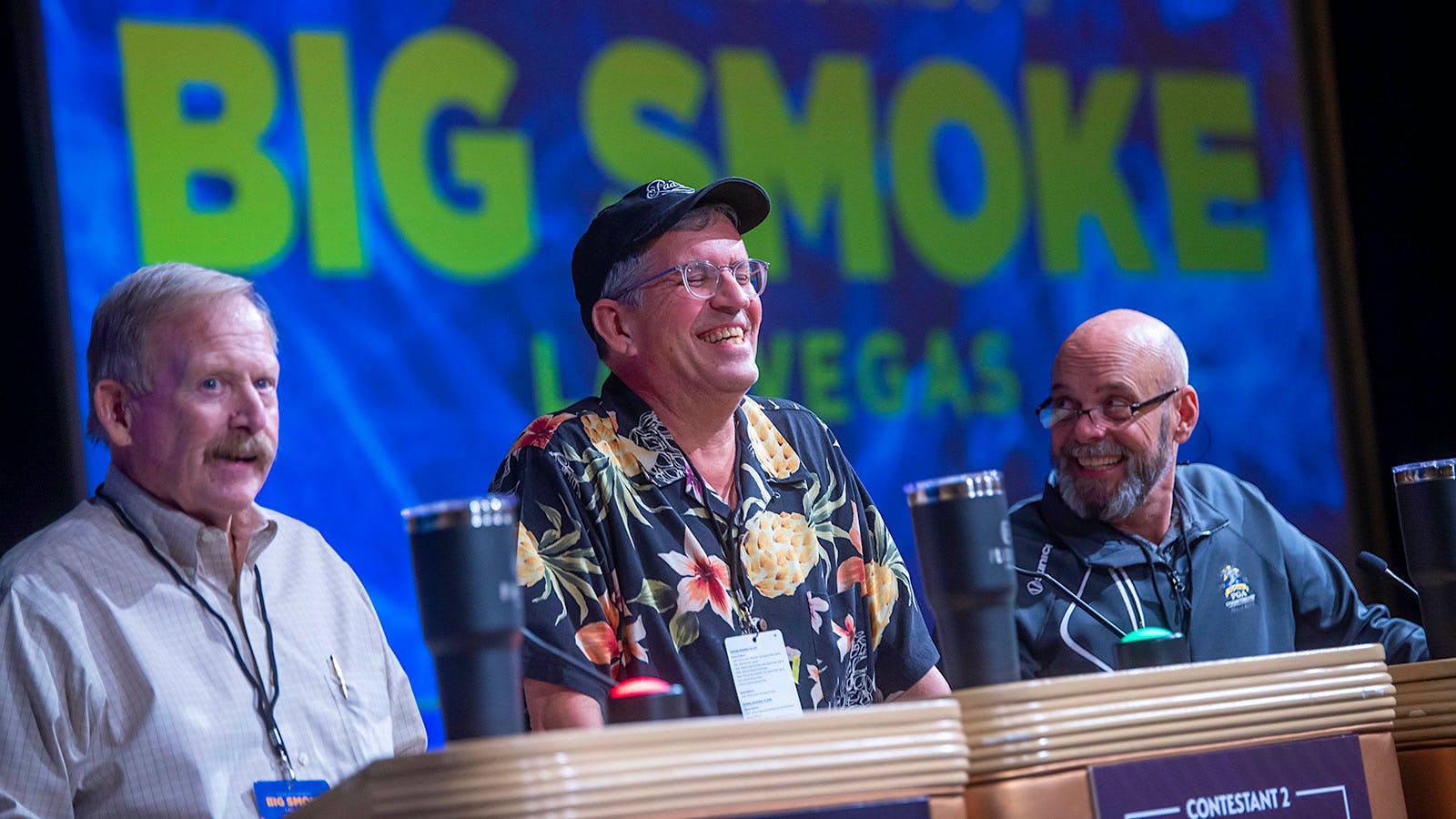 After three rounds of questions, Frank Kohler was named the winner. Each of the three men went home with boxes of cigars from Plasencia, and Kohler was treated to a large humidor filled with Plasencia-brand cigars.

As lunch ended, the crowd headed out to enjoy Las Vegas. Many would be heading to the Big Smoke evening that night, and all would return to the Big Smoke seminars on Sunday morning for the final day of presentations.