Share
The sold-out crowd is all smiles as they wait for the doors to open to the Friday night Big Smoke.

During the evening events, which took place Friday and Saturday night, guests partied with friends and family and also smoked, drank and snapped photos with some of the biggest names in the world of premium cigars, including Pete Johnson of Tatuaje Cigars, Rocky Patel of Rocky Patel Premium Cigars and Ernesto Perez-Carrillo of EPC Cigar Co., maker of Cigar Aficionado’s 2018 Cigar of the Year, the E.P. Carrillo Encore Majestic. 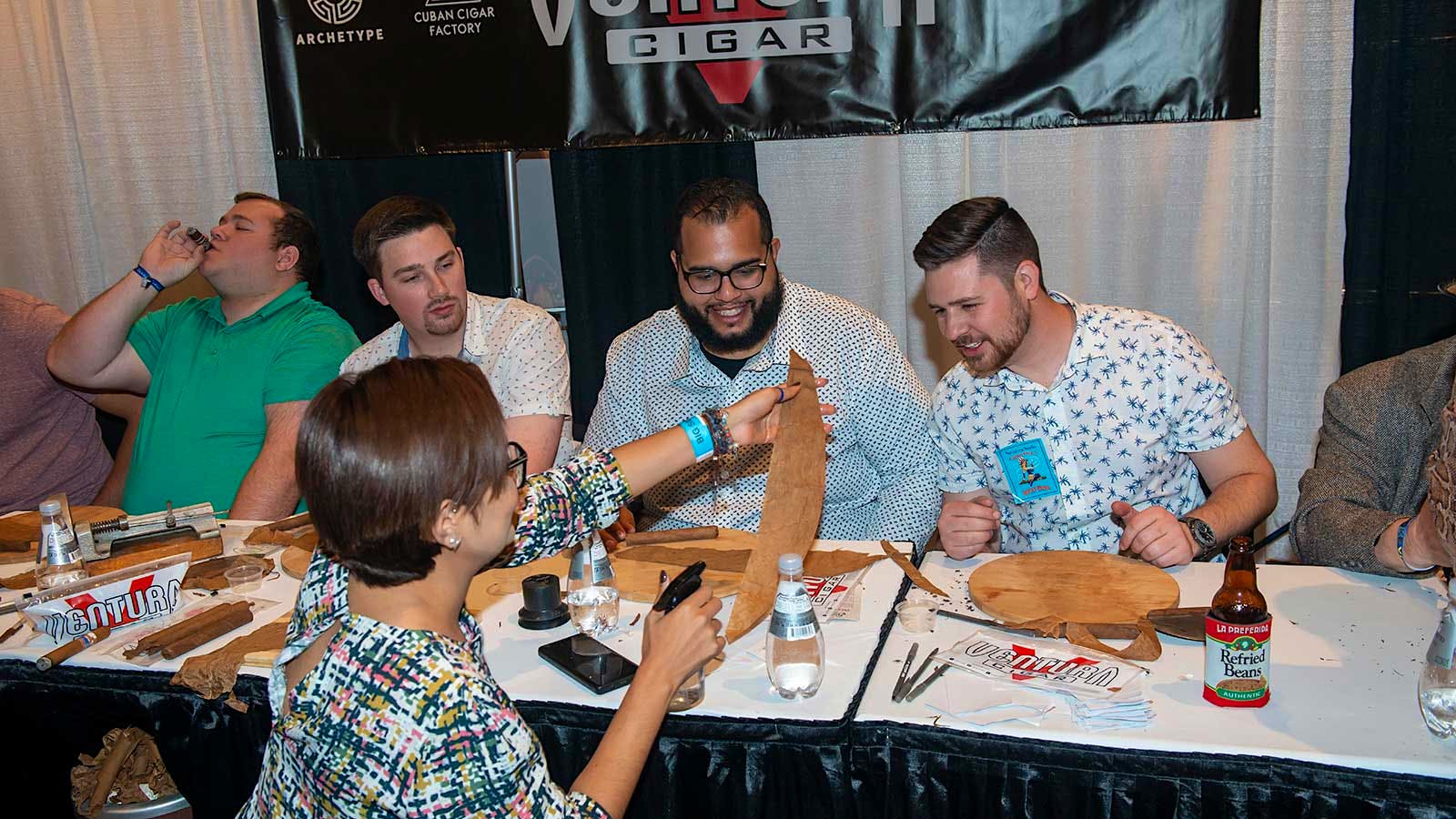 Guests who stopped by the Ventura Cigar Co. had the chance to roll their own cigars under the guidance of cigar roller Indiana Ortez.

While many flocked to Big Smoke from different parts of the United States, others came from thousands of miles away. One cigar fan, Louis Fu, traveled all the way from Beijing, China to take part in the festivities.

”It was about a 17-hour trip from China, if you count [flight] transfers,” Fu says. “I’ve been smoking cigars for three-and-a-half years but this is my first Big Smoke. It’s mostly Cuban cigars in China, but I’m a big fan of Oliva.” 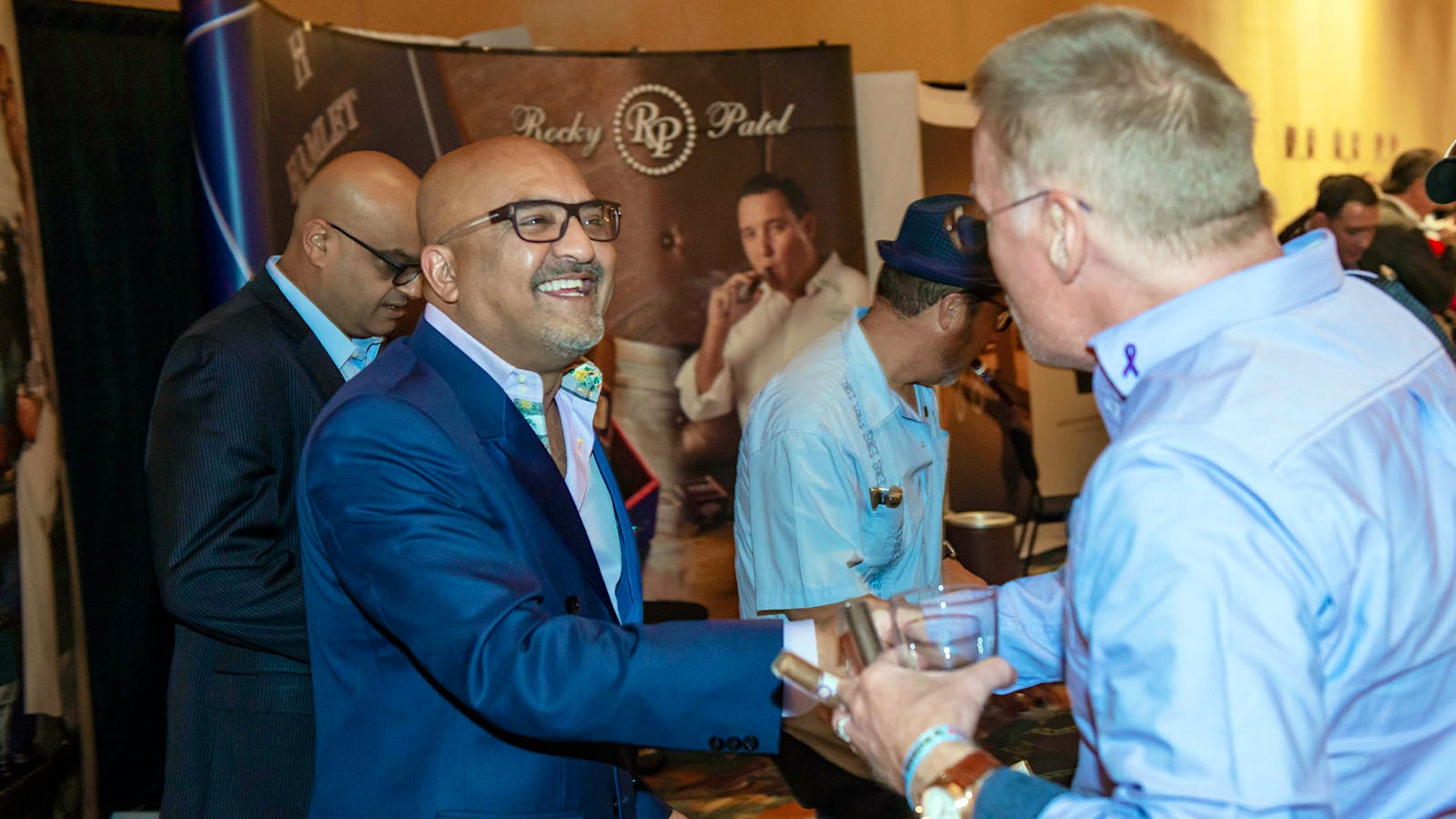 Nish Patel of Rocky Patel Premium Cigars handed out cigars to eager enthusiasts during the event. 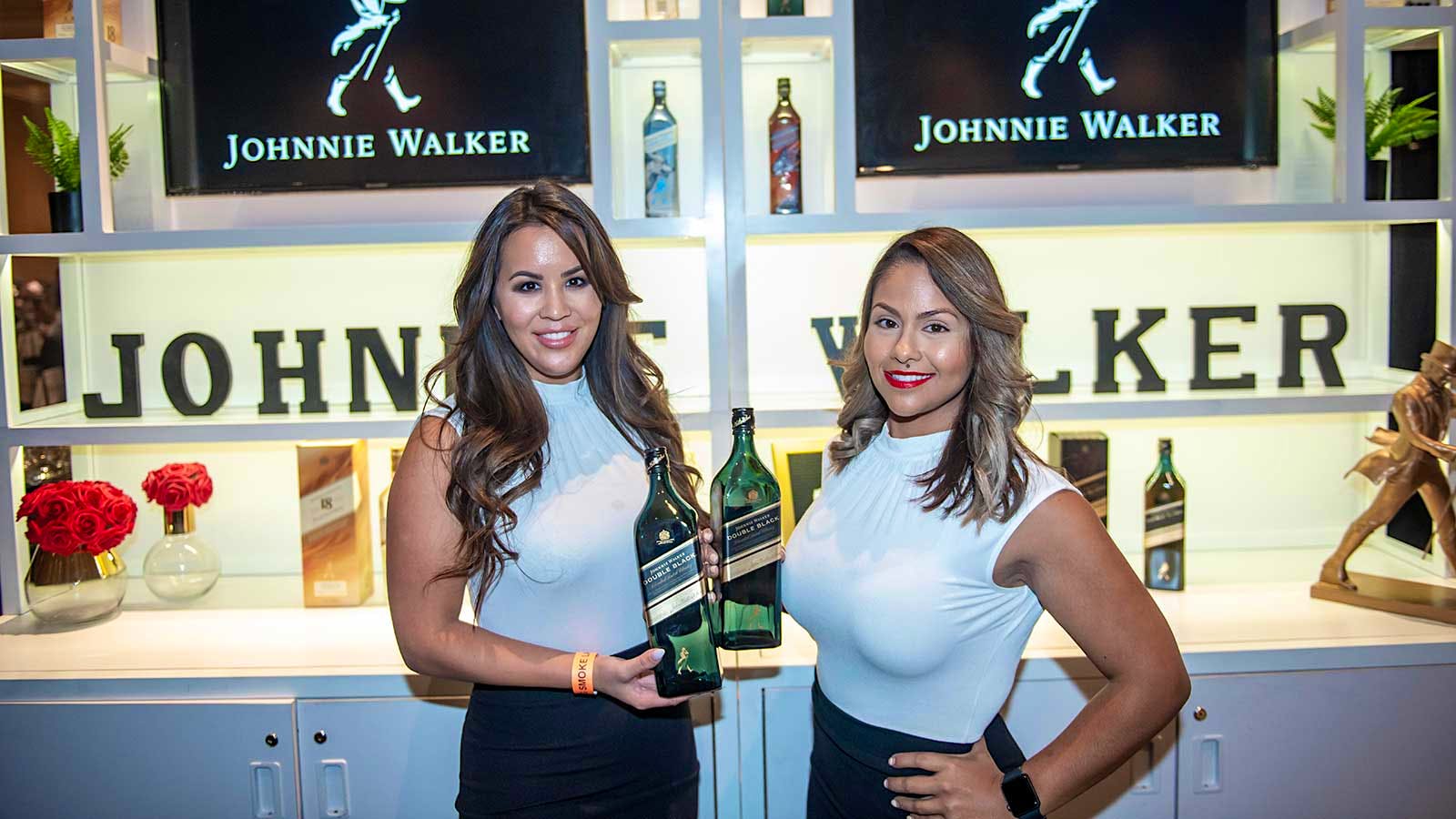 Steve Favors, a local from Las Vegas, and his two brothers Ron and Fred from Arizona, finished gathering their smokes and were relaxing at a side table with hearty plates of food and ice cold cocktails. They were looking forward to lighting up their favorites (Arturo Fuente, Oliva and Rocky Patel) and said that one of the highlights of the evening was taking photos with Litto and Tony Gomez of La Flor Dominicana, as well as Rocky Patel.

“We’re having a great time,” Ron Favors said. “This is my second year at Big Smoke. The experience we had last year made us want to come back for more.” 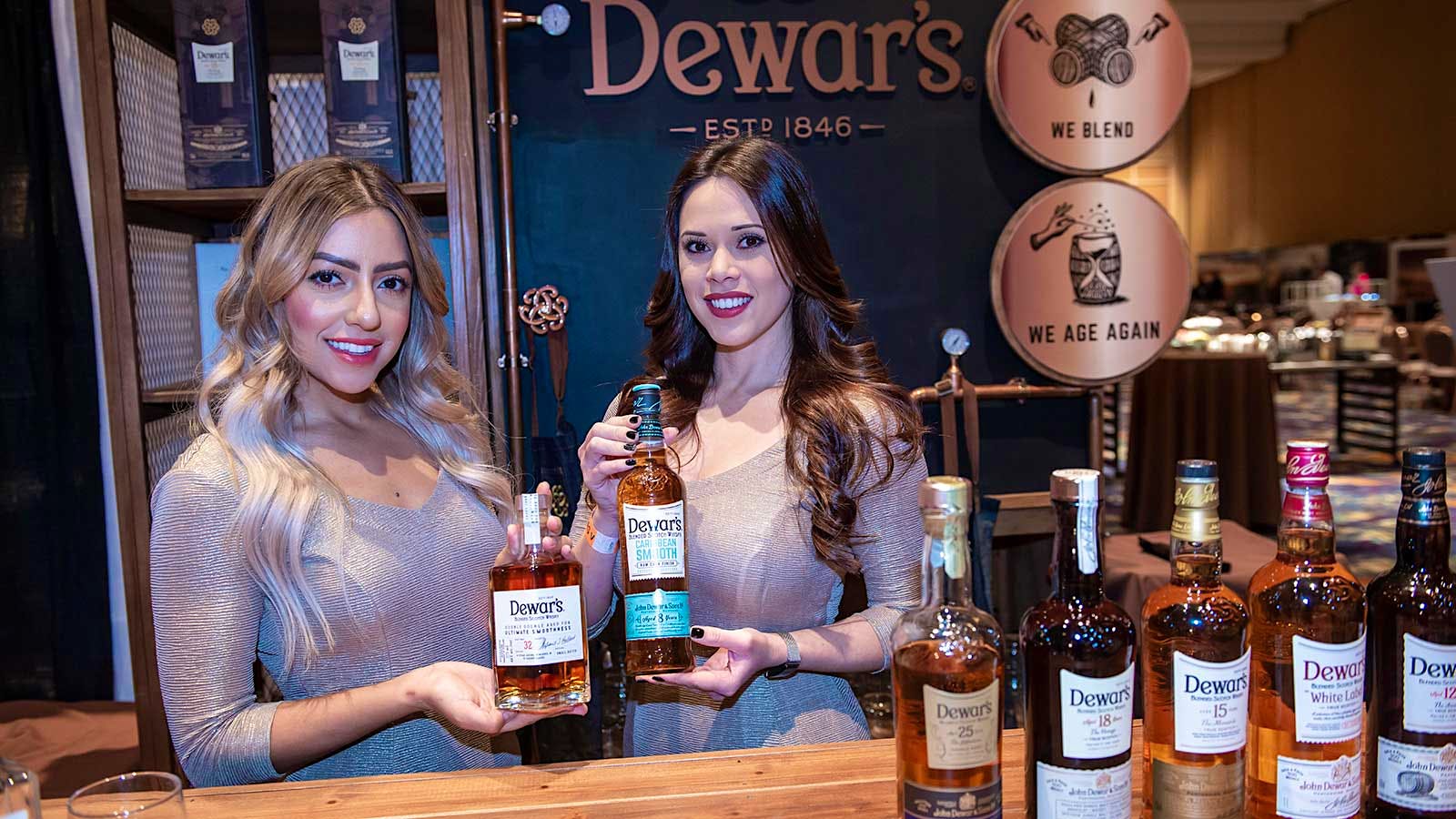 Getting ready for the crowd at the well-stocked Dewar’s booth.

Along with cigar and drink vendors, there was also a robust buffet of food, with special offerings from Delmonico's Steakhouse, Texas de Brazil and Cocolini. A live band filled the room with music, and guests had the opportunity to explore lifestyle exhibits from Bugatti Lighters, Carl F. Bucherer watches, Dominican Republic Tourism, Peter James leather cigar cases, and Rabbit Air smoke eaters.

The Friday festivities were repeated on Saturday with a second roaring night of cigars, drinks and comradery. By the end of the weekend, many attendees were already planning a trip for next year’s event, like Adam Windsor, from Atlanta, Georgia. This was his fourth year attending the Big Smoke. 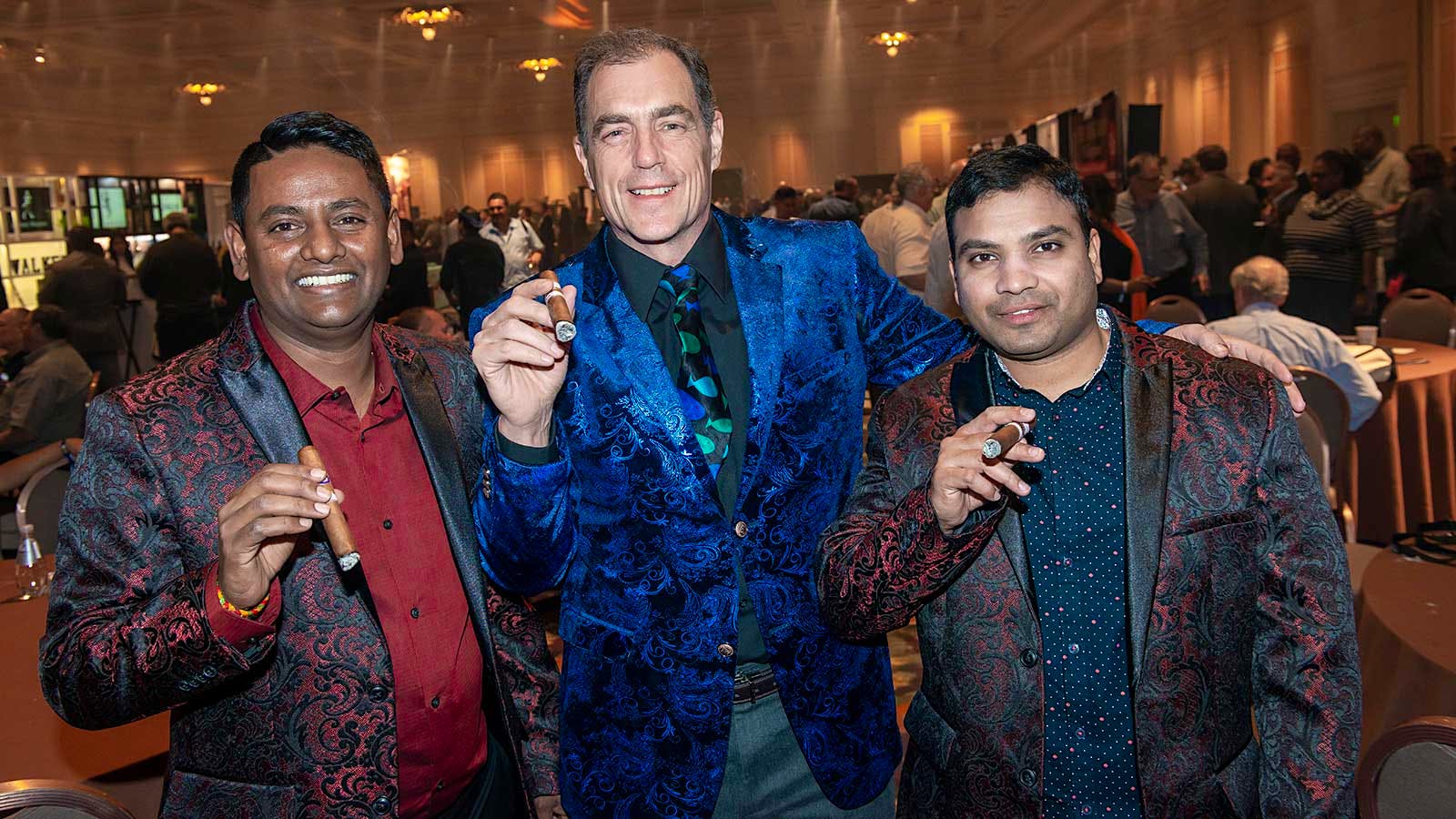 “It’s always entertaining,” Windsor says. “Great vendors, great atmosphere, great libations. You learn about the brands and the new cigars to smoke. And you walk away with a lot of great cigars. I’ll be back again.”