Share
Carlos Fuente Jr. speaks about Cigar Aficionado's 2017 Cigar of the Year: the Don Carlos Eye of the Shark.

What brings nearly 550 cigar fans to the middle of the desert on a Saturday morning? Three words: Fuente, Padrón, Oliva.

At Cigar Aficionado’s Big Smoke 2018, cigar connoisseurs from all over the world flocked to the Mirage Hotel and Casino convention center in Las Vegas to attend educational seminars and taste the top three cigars from Cigar Aficionado’s most recent Top 25 list, made up of standout smokes from three of the most acclaimed cigar companies in the industry—Arturo Fuente Cigar Co., Padrón Cigars and Oliva Cigar Co.

The cigars that earned the top-three positions were the Oliva Serie V Belicoso, at number three; the Padrón Serie 1926 No. 2, at number two; and the Arturo Fuente Don Carlos Eye of the Shark, a hard-to-find figurado that won cigar of the year.

As Big Smoke attendees poured into the Mirage convention center, they were handed a humidified Boveda bag containing all three cigars. Cigar Aficionado executive editor David Savona welcomed the crowd from a podium on stage and invited guests to sit back, relax and light up the Oliva Serie V Belicoso. 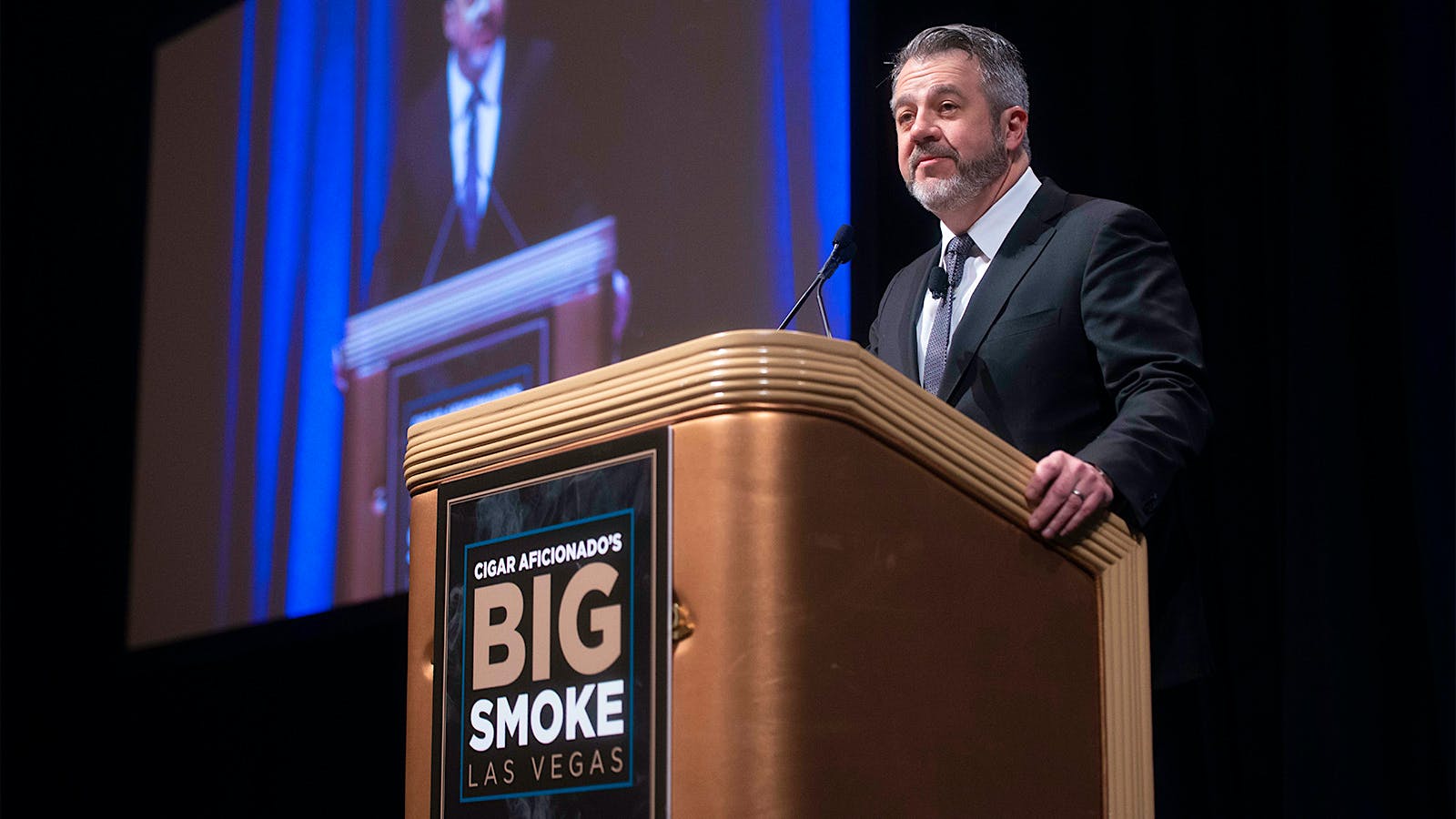 “Every cigar in that bag has scored a minimum of 95 points rated in Cigar Aficionado magazine,” Savona said. “Our first cigar of the day comes from Oliva Cigar Co.”

Puffs of smoke began to appear around the room—in short bursts, like campfire smoke signals—and moments later the entire room was lighting up, sending hazy clouds billowing towards the ceiling. Cigars properly toasted, the crowd focused its attention back at the stage, ready for the seminars to begin. Savona introduced the first guest speaker.

“We have here Fred Vandermarliere from J. Cortès Cigars, which is a family-owned company from Europe,” Savona said. J. Cortès Cigars N.V. is a Belgium company best known for its machine-made cigars. The company acquired Oliva in 2016.

Savona continued: “Fred’s going to tell you all about this wonderful cigar, the Oliva Serie V Belicoso.”

On stage, Vandermarliere talked about the history of his company, its relationship with the Oliva family and the endurance of the Oliva Serie V brand.

“I’m a third-generation cigarmaker,” Vandermarliere said. “In Belgium, my grandfather started making cigars in 1926, in a small attic above his shop. It was a very small operation. But when my father entered the business in ’65 we were already selling cigars all over Belgium. My father focused on growing the business.” 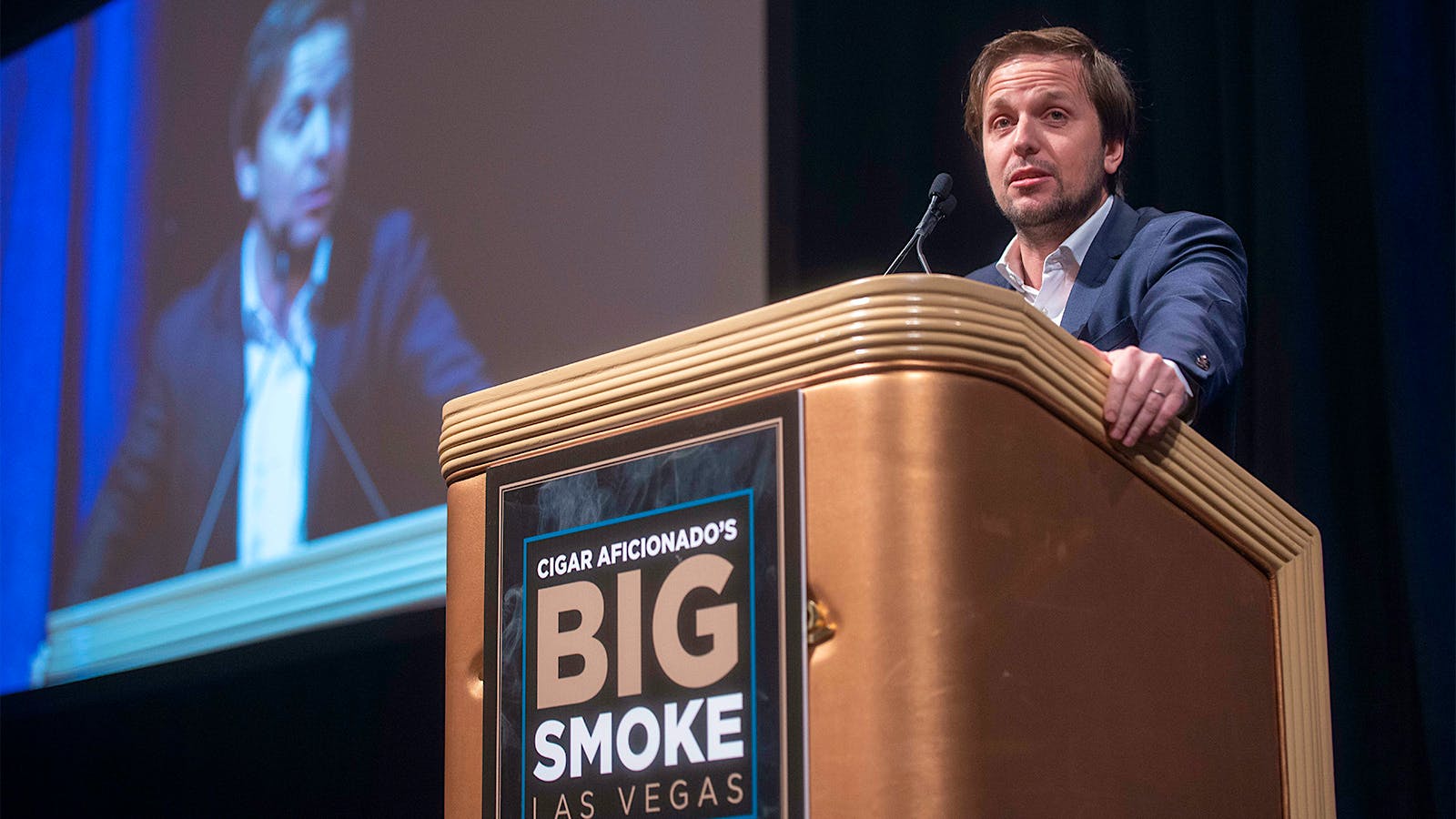 Fred Vandermarliere from J. Cortès Cigars speaks on his relationship with the Oliva family.

Vandermarliere told the crowd how, a few years ago, he wanted to introduce a new long-filler cigar into the J. Cortès portfolio, and traveled to Nicaragua to discuss the project with other cigarmakers. He brought the idea to the Oliva family.

“I met my soul brothers [in Nicaragua]. One of them was the Oliva family—my dream was to make a cigar with them.”

However, negotiations moved past a new long-filler cigar, and turned towards a business acquisition of the entire Oliva Cigar Company.

“It’s been two years since since our family acquired Oliva,” Vandermarliere said. “We wanted to make sure everything stayed the same. … We wanted to make sure the quality of the tobacco stayed the same.” He closed his speech by discussing the Oliva Serie V Belicoso. “The Serie V is over 10 years old now,” he said. “It's made with the great fillers that we grow in Nicaragua with a fantastic Habano wrapper.” 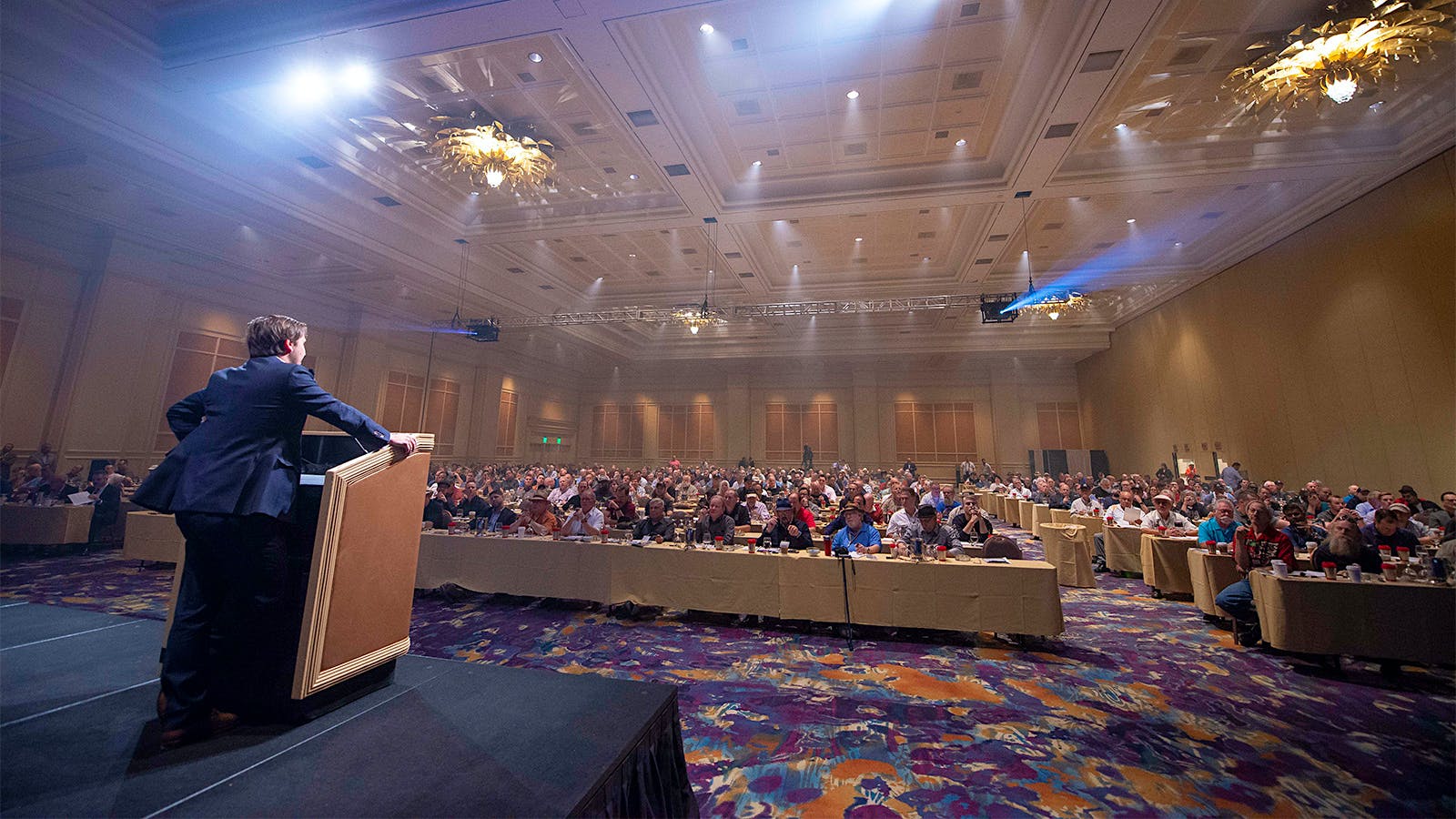 Vandermarliere left the stage to spirited applause and a panel discussion on the Nicaragua’s cigarmaking past, present and future began. When the panel concluded, Savona returned to the podium to introduce the number two cigar of 2017 and its owner, Jorge Padrón, president of Padrón Cigars. The crowd lit up the Padrón Serie 1926 No. 2.

“As many of you know, my father passed away last year,” Padrón said. “He not only created a world-class brand, but he was a world-class person.”

Padrón reflected on how his father’s teachings not only shaped the direction of the company, but helped make him into the man he is today. Padrón also discussed competition in the cigar industry and his company’s strive for greatness.

“The level of competition has increased amongst the manufacturers, which is a good thing. It’s sort of been survival of the fittest, which is also a great thing,” Padrón said. “Those of those that focus on quality products will get ahead; and those that skimp and cut corners will fall by the wayside, because the consumer is the one that has the final say. So, with that, I will put my product up on any competitive board to compete on a fair basis with any product in the world. I’m very confident in our cigars and in the tobacco from Nicaragua and more importantly in the people of Nicaragua.”

Padrón finished his speech with a heartfelt thank you to the audience.

“In closing, I’d just like to say that on behalf of my family, and our Estelí family, our employees—thank all of you for your continued support and loyalty to our brand. I want you to be certain that I understand the responsibility of the task my father entrusted in me. Our commitment to quality, and upholding my father's legacy will never be compromised.” 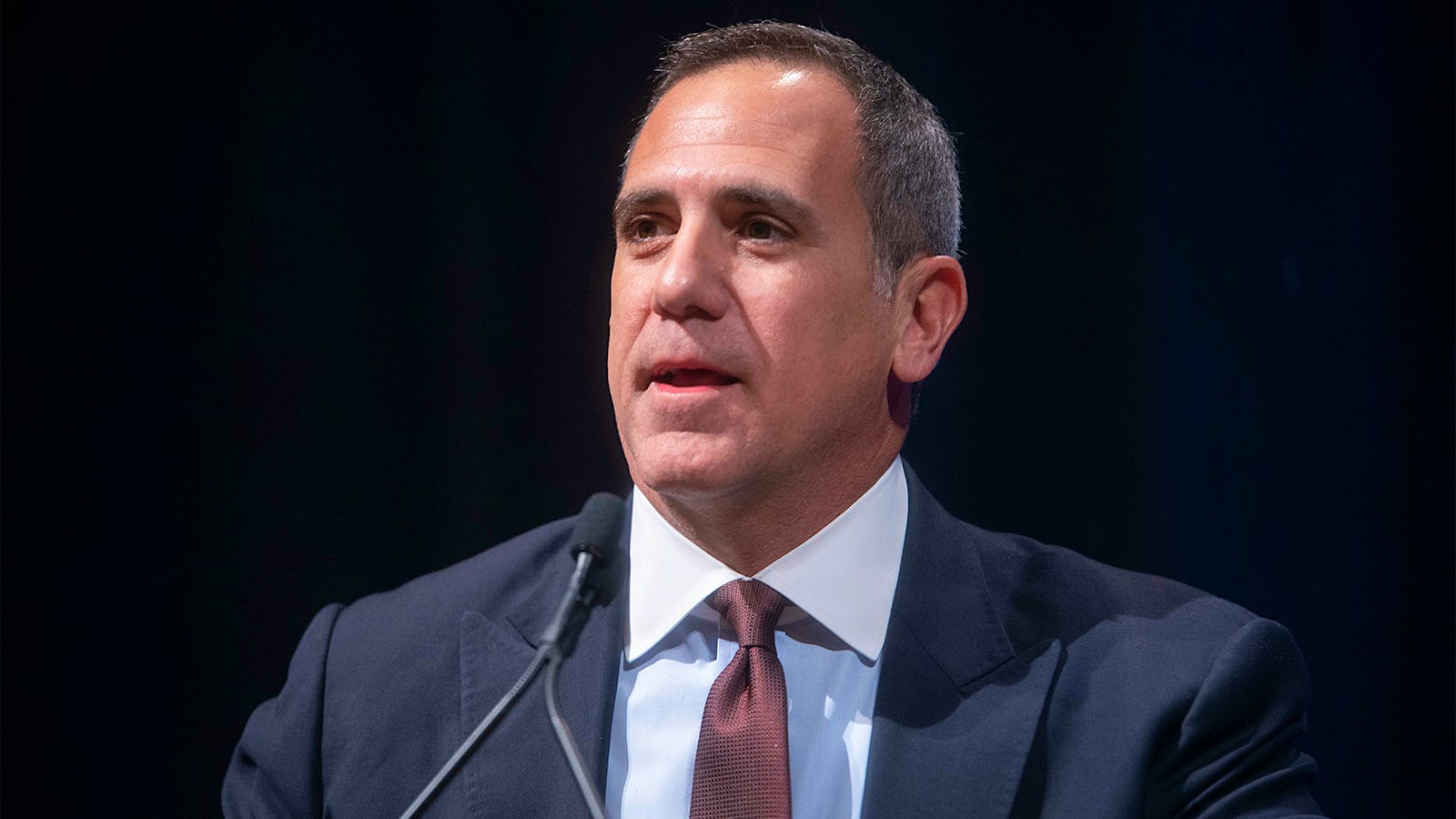 Jorge Padrón, president of Padrón Cigars, discusses his father's legacy and what made him a success in the cigar industry.

Padrón left the stage to tremendous applause and a panel discussion on the current state of Cuban cigars took place. After the Panel concluded, Savona introduced the Arturo Fuente Eye of the Shark, instructing the audience to light the final cigar.

“It is time to smoke Cigar Aficionado's reigning cigar of the year,” Savona said, “and I’m going to introduce Carlos Fuente Jr. who’s going to talk about it. Carlos Fuente Jr. is one of the true masters of cigarmaking. And he’s been around cigars and tobacco his entire life. His talents as a blender cannot be underestimated.”

Rising to the stage, Fuente started his speech by explaining his reasons for making the Don Carlos Eye of the Shark.

“The Arturo Fuente Don Carlos Eye of the Shark is a cigar that I blended and made for one reason, more than anything else—to honor my father,” Fuente explained. “It’s a shape which is absolutely unique. A shape that we created, which has a big influence on the overall personality of the cigar. It has a belicoso head but at the bottom it turns into a square. It’s from round to square—and it’s not a box-pressed cigar, it’s made in a mold that way.”

His speech led him to discuss the power of cigars and their greater meaning in the world.

The crowd roared in approval. As Fuente walked away, the audience rose to its feet in a collective wave, delivering a standing ovation that closed out the Top Three Cigars of 2017 and ushered in the next panel on Cult Cigars.