Every aspect of the Big Smoke Las Vegas is meant to give attendees a greater understanding of the handmade cigars they enjoy. And, there is perhaps no better way to appreciate the art of cigar rolling than by taking on the task yourself—and that’s exactly what happened at Sunday’s Roll Your Own seminar, which was hosted by Ventura Cigar Co.

This year, longtime host and fan favorite Michael Giannini was back at the helm of this lively seminar. Giannini, along with his team at La Gloria Cubana, frequently hosted the Roll Your Own event during his 17-year stint at General Cigar Co. Now Giannini is the general manager at Ventura Cigar Co., and he made a triumphant return to the Big Smoke this year with new cigars to roll, new special guests and an abundance of new prizes to award the best—and most creative—cigars rolled at the event.

“It’s been a while since I’ve done this,” said Giannini, as he took the stage. “So I’m going to need a little help.” He then introduced two special guests: his former La Gloria Cubana colleague and cigar-industry veteran Ernesto Perez-Carrillo, along with young up-and-comer Indiana Ortez, who recently collaborated with Ventura on a limited-edition cigar.

Each guest was given a moist leaf of Ecuadoran habano wrapper and a pre-rolled Indonesian binder with Nicaraguan habano filler. Giannini told the audience that these were the same tobaccos used by Drew Estate to produce Ventura’s Archetype Axis Mundi, Cigar Aficionado’s No. 13 Cigar of 2017. There were also given a razor and some gomma, a flavorless, odorless vegetable adhesive used to secure the head of the wrapper leaf around the finished bunch. 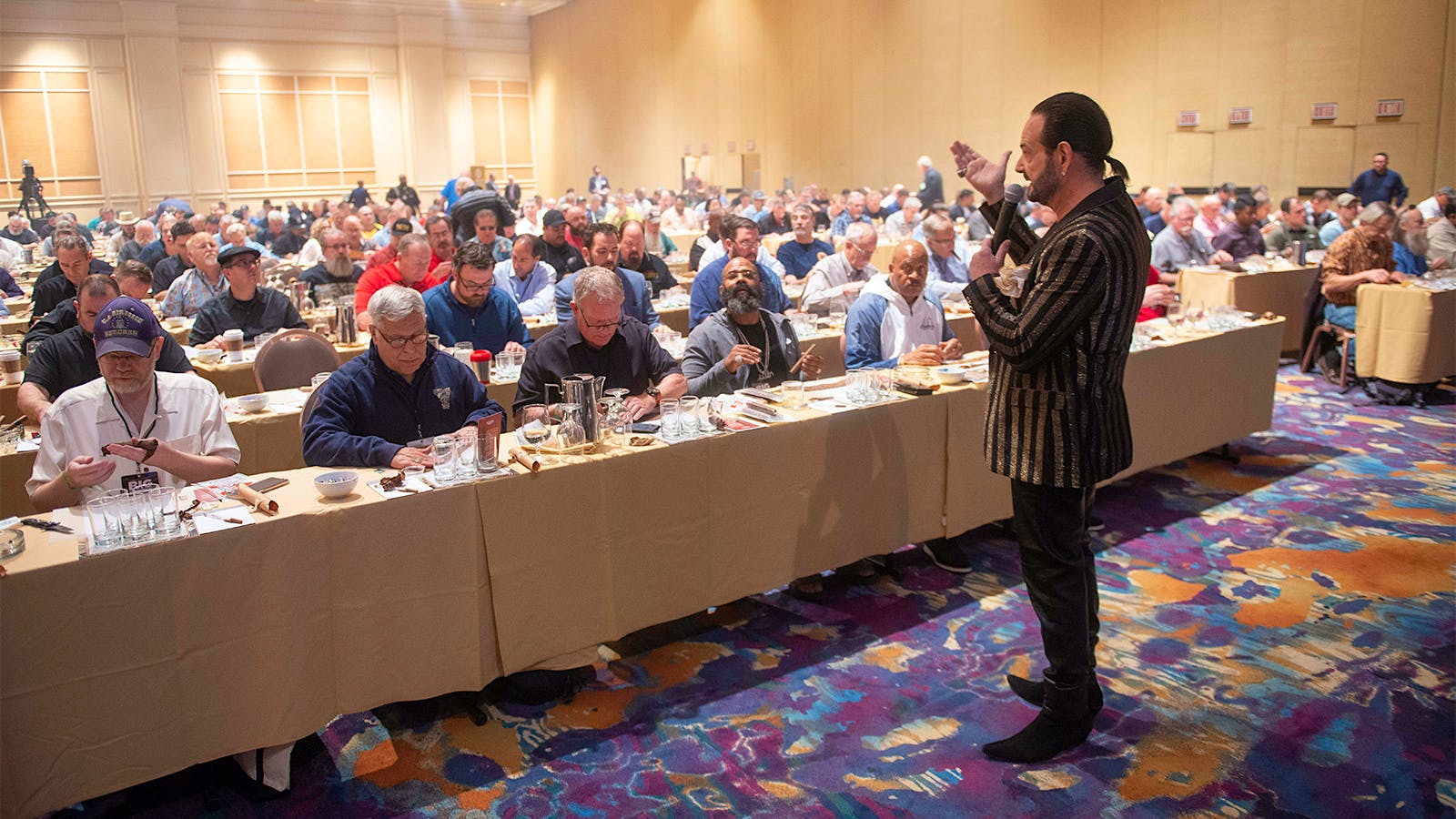 With Ortez demonstrating her cigar-rolling techniques on stage and Perez-Carrillo overseeing the crowd, the rolling contest was under way.

“Look for the details,” said Perez-Carrillo, offering some preliminary advice. “That’s what rolling a cigar is all about.”

The first step was coaxing the wrapper. Giannini instructed the participants to lay out the tobacco with the veins facing up and then to massage the leaf until it’s flat and without wrinkles. And as soon as the leaf was even on the surface, it was time to trim the wrapper with the razor blade. Perez-Carrillo described the half-moon shape it should take on, but also warned the audience to proceed with caution and not cut away too much. “The tip of the leaf has the most flavors,” he advised.

Next came the most crucial step: rolling the wrapper onto the bunch, which is the combination of filler and binder tobacco. As the crowd began to apply the wrapper, the room went from lively to focused and silent.

“It’s quiet in here,” remarked Giannini. “But that’s good. Whoever wins first prize is going home with 175 cigars in a brand new humidor. No pressure,” he joked. 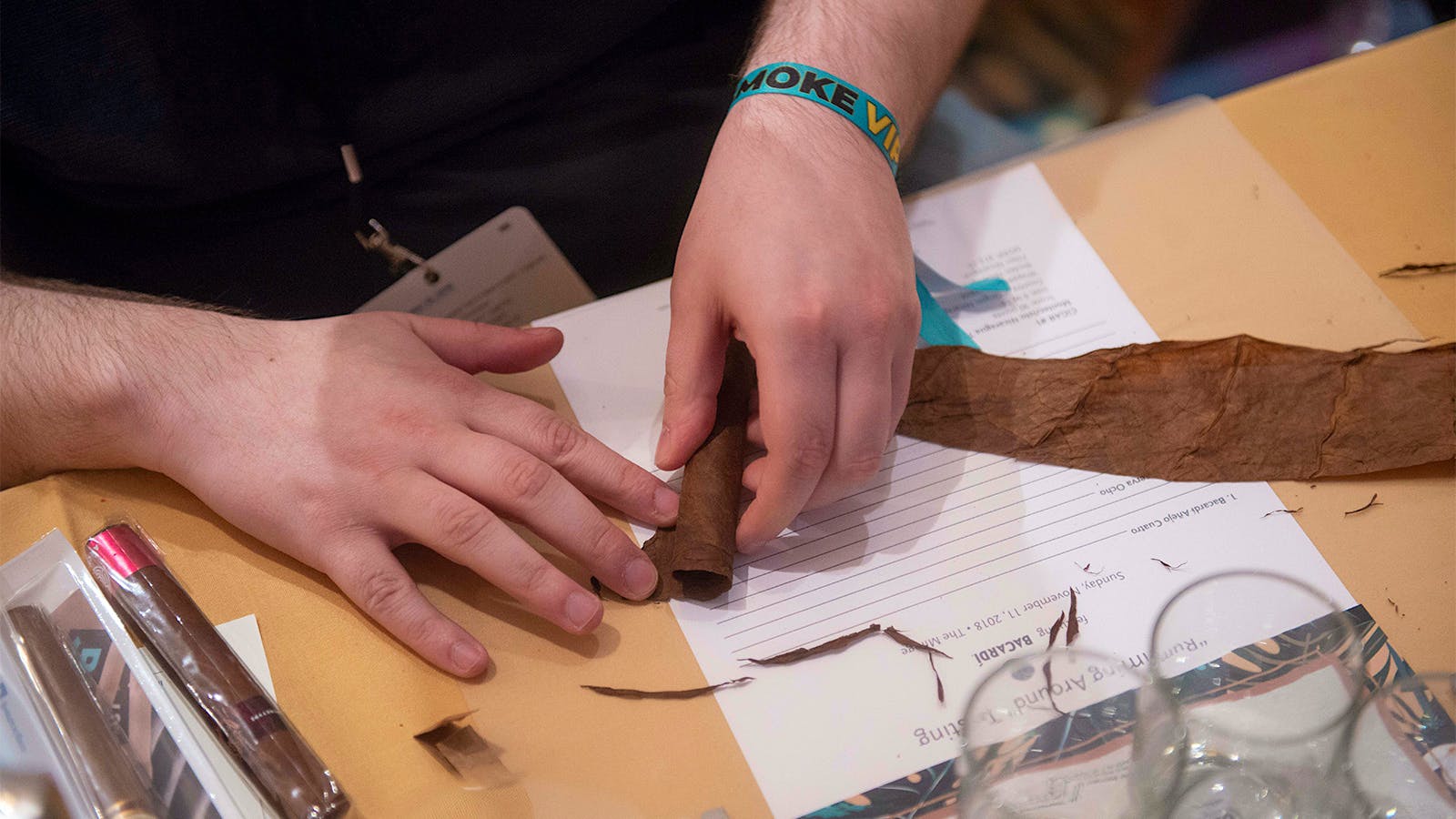 The most crucial step: rolling the wrapper onto the bunch.

Perez-Carrillo continued to walk the room, lending guidance and support as the audience quickly learned that rolling a cigar wasn’t exactly as easy as it looked. “If you can’t roll a cigar, then get creative,” he said. Later it would be revealed that many in the audience took his advice.

At one point, Giannini took the temperature of the room. “How are we doing?” he asked.

When the rolling session came to an end, the audience was asked to put their creation in a bag with their name on it and bring it to the stage.

Giannini, Perez-Carrillo and Ortez then began to judge the cigars based on skill and creativity. One bag in particular got their attention immediately. Perez-Carrillo opened it, and next to the cigar was $400 in cash. The ploy got a good laugh, but unfortunately, bribing the officials would not help in this situation.

“It’s not about the money, it’s about the cigar,” said Perez-Carrillo. “But the money helps.” Michael Nelson, the man who tried to grease the wheels of the judges, was awarded a bundle of Archetype cigars for the effort.

Then came the awards for most creative cigars. Ross Dean from Iowa was also given a bundle of Archetype for his cigar, which he rolled in the shape of a handlebar mustache. Martha Smart from Texas tested out a new branding method by cutting out the Ventura logo on her bag and taping it to the cigar. Jim Trinka added a bit of Cuban flair by slipping a Montecristo ring around his hand-rolled smoke. Unfortunately, it looked more like a counterfeit you’d find on the beach in Mexico than the real deal.

There were more unique shapes, sizes and gimmicks, all of which were awarded with Ventura cigars, and then the judges moved on to the best-rolled smokes. “The top five I’m really impressed with,” said Perez-Carrillo. “The way they finished the cigar looks really nice.” 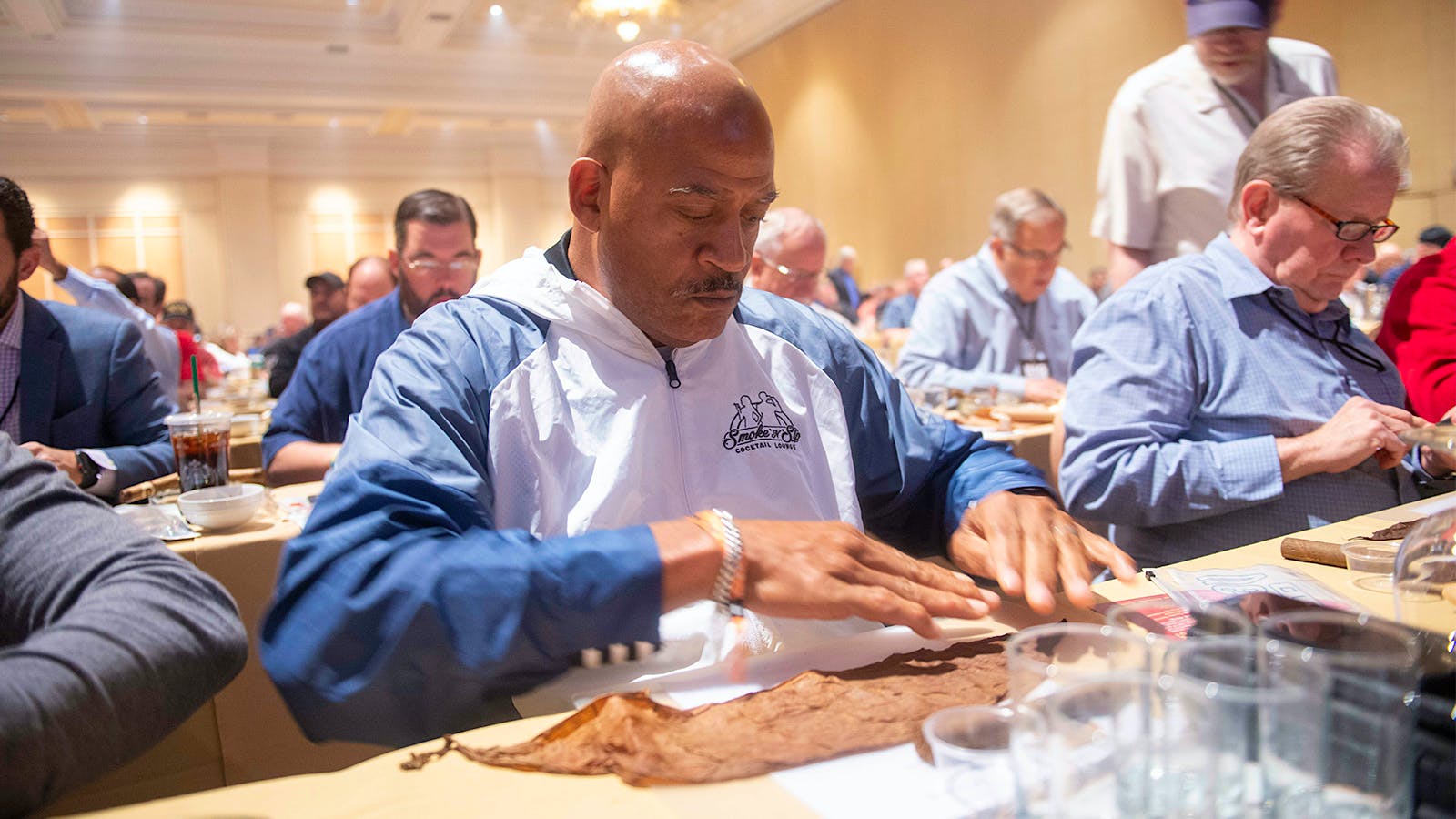 As the crowd began to apply the wrapper, the room went from lively to focused and silent.

Larry Nielsen and Ron Militello, who placed fourth and fifth, respectively, were awarded two boxes of Ventura cigars. Mark Little of Illinois won the third-place prize, which consisted of two boxes and a custom Xikar cutter. Jack Jones from Toronto, Canada, placed second and was awarded three boxes of cigars, plus the same Xikar cutter.

When it was time to announce first place, the crowd grew silent again and the room filled with anticipation. Giannini held up a pristinely rolled cigar and announced the winner: Fletcher Wells of St. Louis, Missouri. Wells walked on stage to receive his prize, which Giannini claimed to be valued at more than $1,000. It consisted of a 150-count Archetype humidor, five boxes of assorted Archetype cigars, a box of Foundry cigars, three bundles of cigars—Archetype Dream State, Sage Advice, and Strange Passage—and a Xikar cutter.

The cigar was impressive, but for Roll Your Own champion Fletcher Wells, this was no feat of beginner’s luck. Wells has attended the Big Smoke an incredible 22 times, which means he has only missed one year in the entire history of the event. And if you’re wondering, no, this is not his first time winning the Roll Your Own contest. In fact, this year marks his fourth time as champion—an amazing feat.