While everyone who goes to the 2017 Big Smoke Las Vegas weekend returns home with a treasure trove of great cigars, none are more special than the premium sticks passed out moments before the Saturday seminars begin.

As guests of the 22nd annual Big Smoke streamed into the Mirage Events Center to take in a morning jampacked with educational cigar discussions, each individual received a sealed Boveda bag. Inside? The top three (legal) cigars from Cigar Aficionado’s Top 25 Cigars of 2016 list, including the hard-to-find La Flor Dominicana Andalusian Bull, the reigning Cigar of the Year, from Litto Gomez.

Nestled next to the Andalusian Bull was the Rocky Patel Sun Grown Maduro Robusto, the No. 2 cigar of 2016, and the No. 4 E.P. Carrillo Selección Oscuro. (The Cuban Partagás Serie E No. 2, Cigar Aficionado’s No. 3 cigar of 2016, could not be legally handed out.)

Traditionally, the Big Smoke seminars begin with a tasting of the top cigars from the most recent Cigar Aficionado Top 25 list. These cigars aren’t tasted all at once, but rather spaced out throughout the day so that cigar lovers have time to savor and enjoy each special smoke. To add even more context, the cigarmaker responsible for the creation of each top-tier smoke personally speaks to the crowd to offer some background on the cigar. 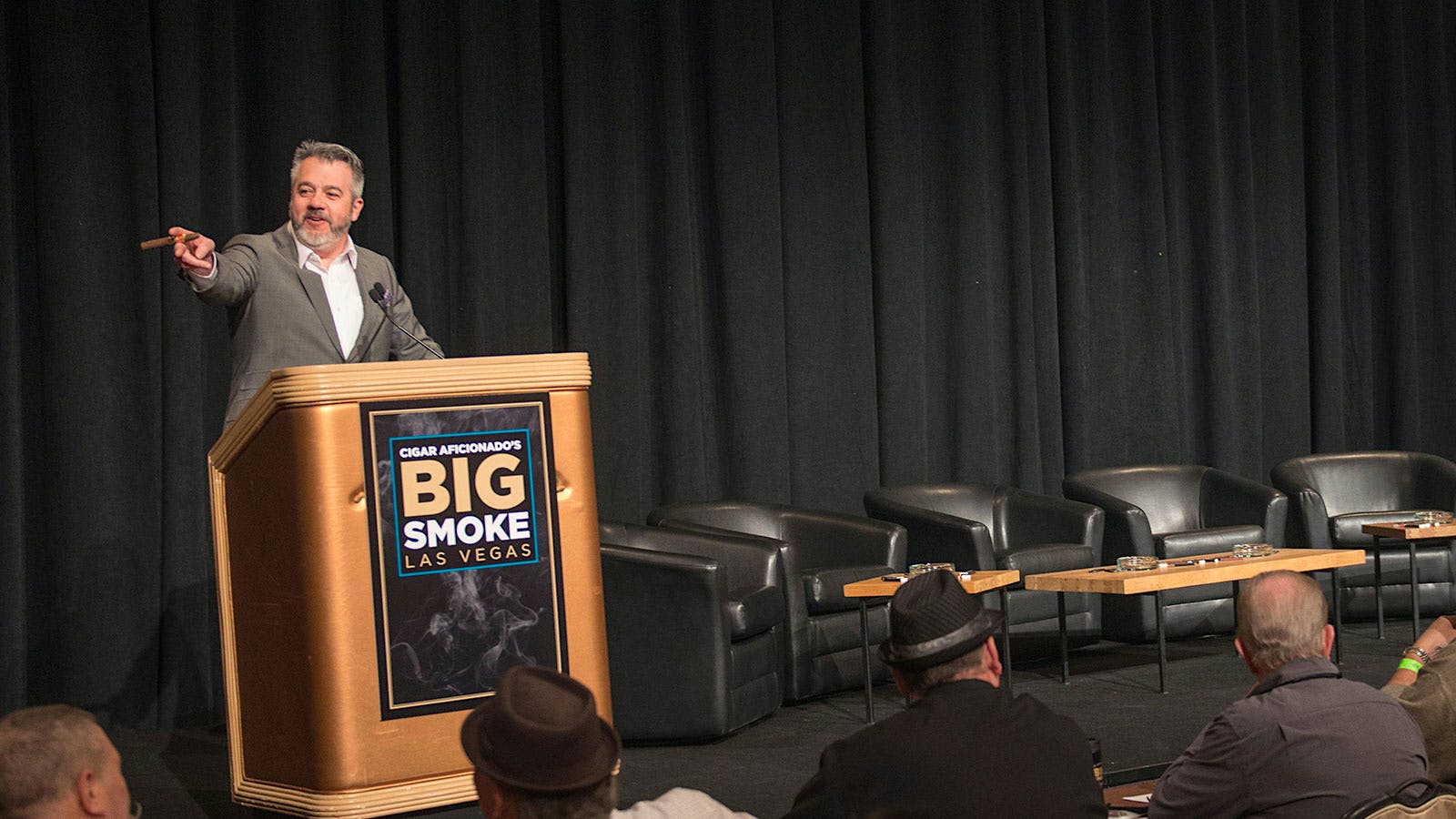 Executive editor David Savona welcoming everyone to the Big Smoke and encouraging the crowd to light up the E.P. Carrillo Selección Oscuro.

This year, the eager crowd was in for a real treat as all three cigarmakers—Litto Gomez, of La Flor Dominicana; Rocky Patel, of Rocky Patel Premium Cigars; and Ernesto Perez-Carrillo, of EPC Cigars Co.—are members of the exclusive Cigar Aficionado Hall of Fame.

Executive editor David Savona took to the lectern on the stage at the front of the room, welcoming everyone as they took their seats with a short speech that touched on the 25th anniversary of Cigar Aficionado magazine. He then encouraged the crowd to light up the E.P. Carrillo Selección Oscuro, before introducing its creator, Ernesto Perez-Carrillo, founder of EPC Cigar Co.

Perez-Carrillo, who has spent more than four decades making cigars, recalled the first time he ever met Marvin R. Shanken, the editor and publisher of Cigar Aficionado. It was at the annual cigar industry trade show, before the magazine event existed, and Shanken was making it a point to meet as many cigarmakers as he could to collect their thoughts on the idea of starting a cigar magazine. 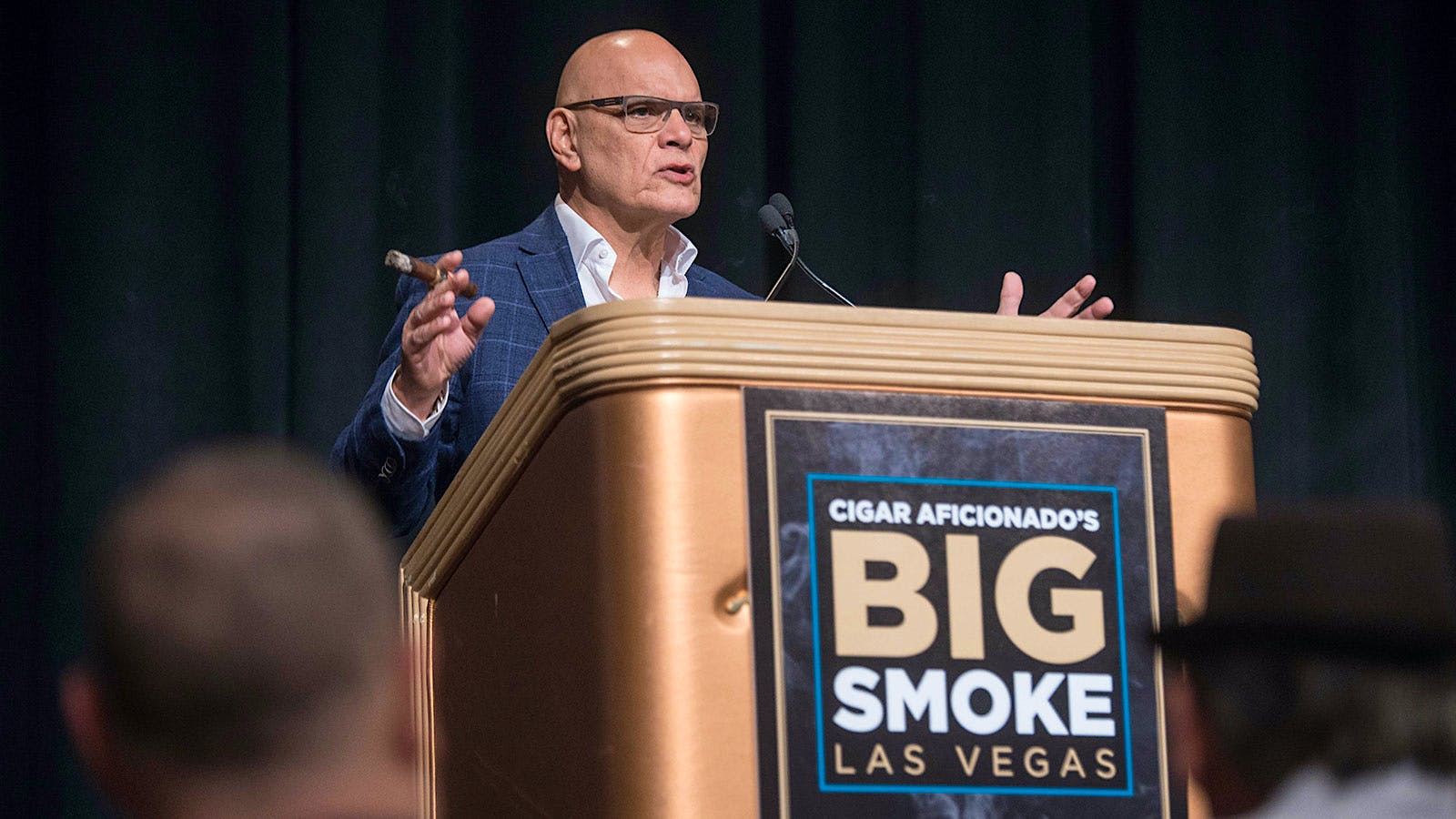 “Marvin said to me ‘I want to make you and your peers rock stars,’ ” said Perez-Carrillo up on stage. “I looked at him like he was crazy.” Months later, an issue of Cigar Aficionado hit newsstands with an article on Perez-Carrillo’s boutique cigar factory in Miami.

Perez-Carrillo also praised the magazine’s cigar rating system, calling it “the backbone of the industry” and a benchmark that “shows that our labors as cigarmakers are never going unnoticed.” 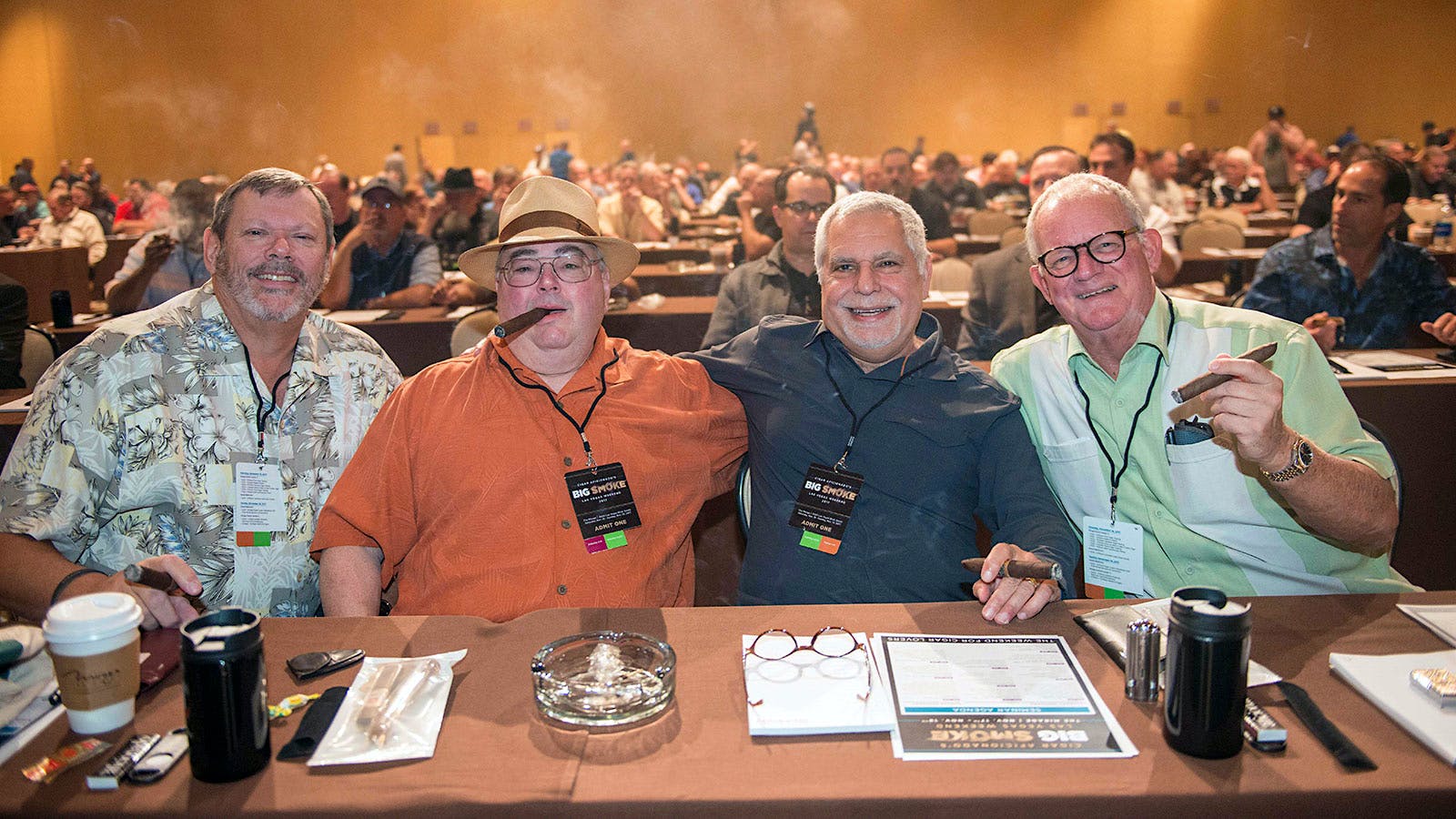 The gracious Perez-Carrillo also paid tribute to some of the individuals in the cigar industry who he learned from. Men such as José "Don Pepe" Mendez, who founded José Mendez & Co., a major tobacco supplier; Carlos Fuente Sr., who helped Perez-Carrillo set up his factory in the Dominican Republic in the mid-90s “because they understood that the D.R. needed more cigarmakers;” Angel Oliva Sr., founder of Oliva Tobacco Co., which grows Perez-Carrillo’s favorite wrapper, Ecuadoran Sumatra; Rolando Reyes Sr. and José Orlando Padrón, “who put Nicaraguan cigars on the map.”

About 45 minutes later, after the Made In Miami panel discussion, Rocky Patel, took to the stage to present his Sun Grown Maduro Robusto, the No. 2 cigar of 2016.

“I chose to make it a box-pressed cigar because what it really does is forces air out and doesn’t let the cigar burn hot,” Patel explained to the crowd. 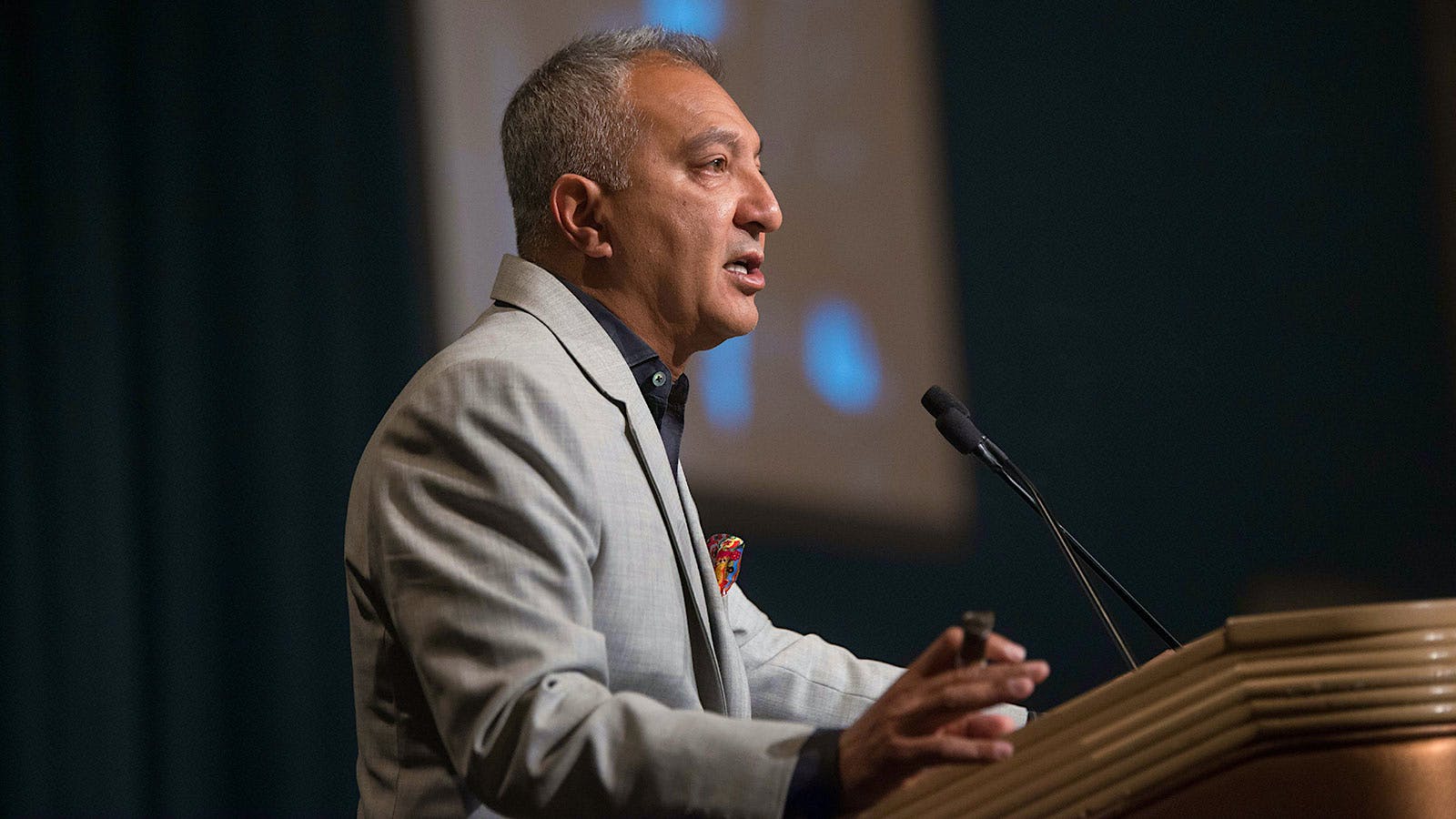 Rocky Patel presenting his Sun Grown Maduro Robusto, the No. 2 cigar of 2016.

Patel then went on to give one of the clearest, yet concise descriptions of the entire cigarmaking process, from planting the tobacco seeds, harvesting and curing the leaf, to sorting the tobaccos and creating blends that get rolled and packaged for sale.

Spinkled throughout his speech were several nuggets of cigar knowledge that Patel has acquired during his 20-plus years in the industry, most notably the challenges of producing a blend that is consistent year-to-year because “it’s what consumers expect.”

“Mother Nature changes year to year,” said Patel, “and that means we have to as well. If I’m using the seventh priming in a blend one year, we may have to use the priming from another plant or another year to ensure the consistency.”

After the crowd listened and learned How to Spot a Fake Cuban Cigar, Litto Gomez took to the podium to talk about his Andalusian Bull, the 2016 Cigar of the Year. The famed cigarmaker was not alone, though, as his wife, Ines, and sons Tony and Litto Jr. joined him.

“Wait, I’m forgetting something,” said Gomez right as he reached the podium. He pointed to an audience member and said “Can I borrow that?” In a flash he hopped down off the stage and returned with a white fedora, his signature fashion accessory, in hand. 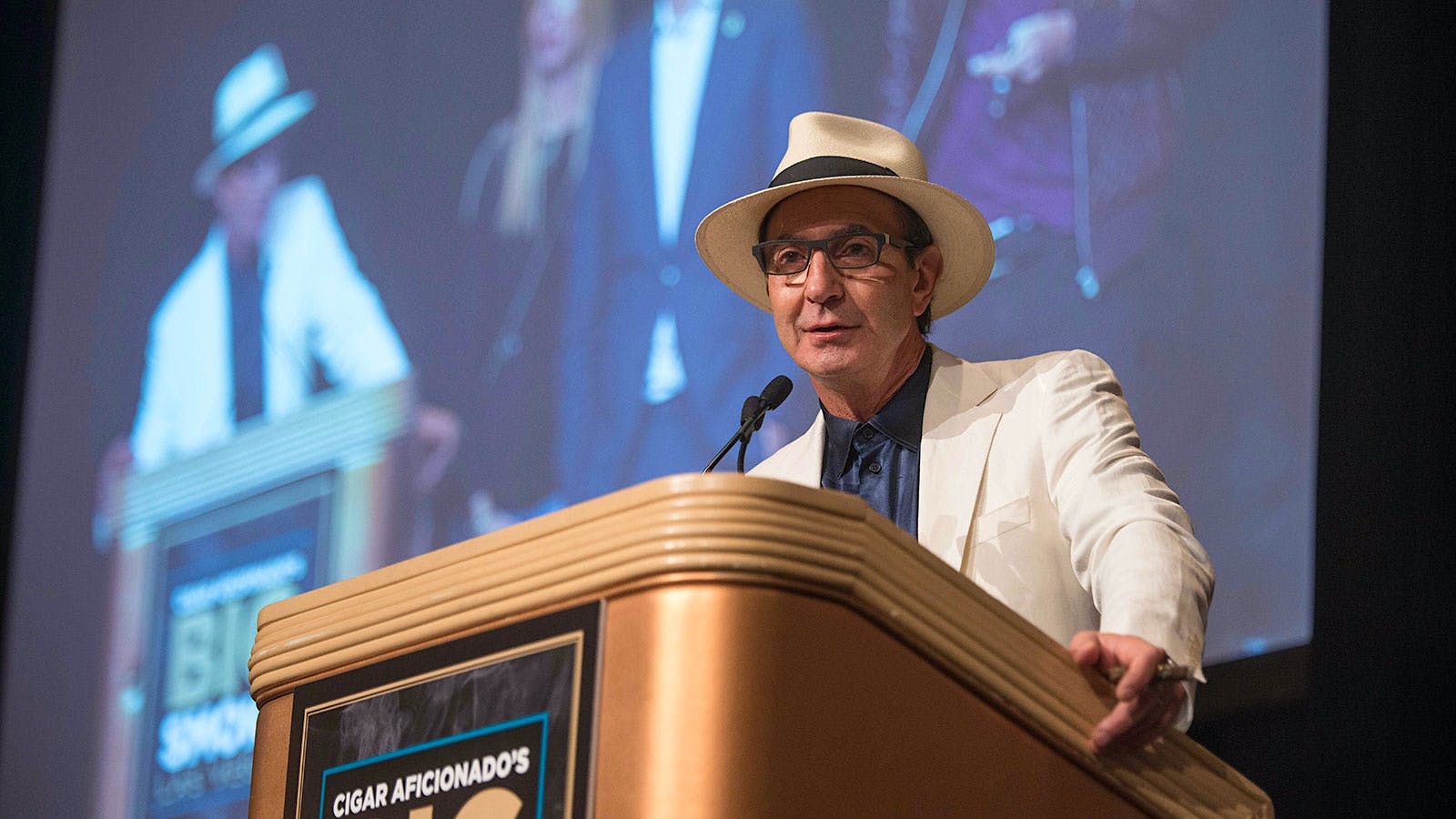 Litto Gomez talking about his Andalusian Bull, the 2016 Cigar of the Year.

“That’s better,” he joked, placing hat atop his head to a round of applause.

Gomez first spoke about his father—“a great man”—and the lessons he learned from him. “My father always taught me to work hard to overcome obstacles, and most importantly, be honest.”

Around the age of 16, Gomez found himself not only playing soccer in Uruguay, but getting paid to do it. “I had it all figured out,” he said. “I was going to be a professional soccer player for the rest of my life. Things didn’t turn out like that.” The audience chuckled.

Gomez spoke about the difficulties of emigrating to Toronto in search of a better life. He could hardly speak English, but managed to find work as a dishwasher in a restaurant. Soon, he found himself wanting to move up in the restaurant’s ranks.

“I told myself that if I wanted to become a busboy, I needed to first be the best dishwasher in the restaurant,” said Gomez. “Then after I was made a busboy, I wanted to be a waiter. But to become a waiter, I first had to be the best busboy.” Gomez’s discipline and hard work would eventually paid off, as he became the manager of the entire restaurant.

Gomez would then apply this work ethic when he decided to become a cigarmaker at the age of 40 in 1994. 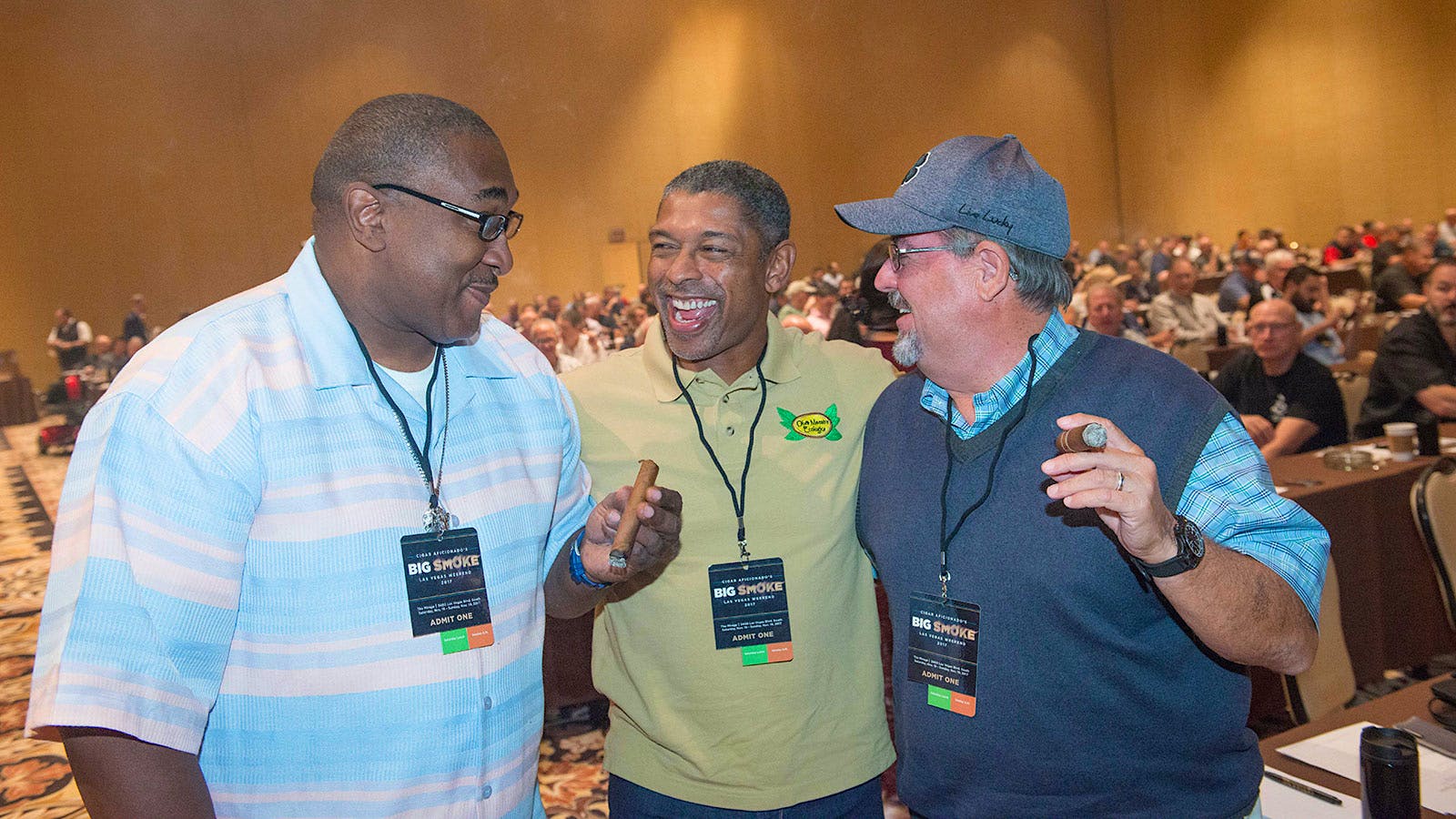 Walter Frazier, Ted Hughes and David Boggs share a laugh in between seminars.

“The first time I stepped into a room filled with tobacco, it got into my body and was like fire,” Gomez recalled.

It was then that Gomez recalled the story of how the Andalusian Bull, a project that was done in concert with his son Tony.

While in Belgium at the offices of J. Cortès Cigars N.V., a company known for machine-made cigars whose origins can be traced back to 1926, Gomez came across a very old cigar mold.

“I saw this very old mold and instantly fell in love with the shape. So I took pictures of it,” said Gomez. Upon returning to the Dominican Republic where his factory is located, Gomez immediately asked his woodworking department to replicate the mold. The mold would eventually be used for the Andalusian Bull, a shapely Salomone.

The man in the white hat then exited the stage to a round of applause, and it was on to the next cigar education seminar, the 25th Anniversary Panel.

2016 Top Cigars Tasting
Made in Miami
How to Spot a Fake Cuban Cigar
25 Years, A Retrospective
Dining With Drew Estate