It was 9 a.m. in Palm Beach Gardens, Florida, and the driving range at Old Palm Golf Club was starting to get busy with golfers who were eager to prepare for a sunny day on the course. It was a mix of talents, high handicappers standing by scratch golfers, along with a star-studded field of pros, many of them champions on the grandest stages of the game.

On the right corner, three-time major champion Vijay Singh was effortlessly swinging his irons, each ball looping on an arc of the same shape, time after time. Nick Price, who also owns three majors, hit a few balls, talking to the pros around him as he worked the ball one way and then another. Mike Piazza, the superstar former Met, ambled by, heading for an empty bay. Mike Eruzione, who led the American Olympic Hockey Team to the most unlikely of Olympic upsets against the Soviets in 1980, was there with a smile, ready to tee it up. 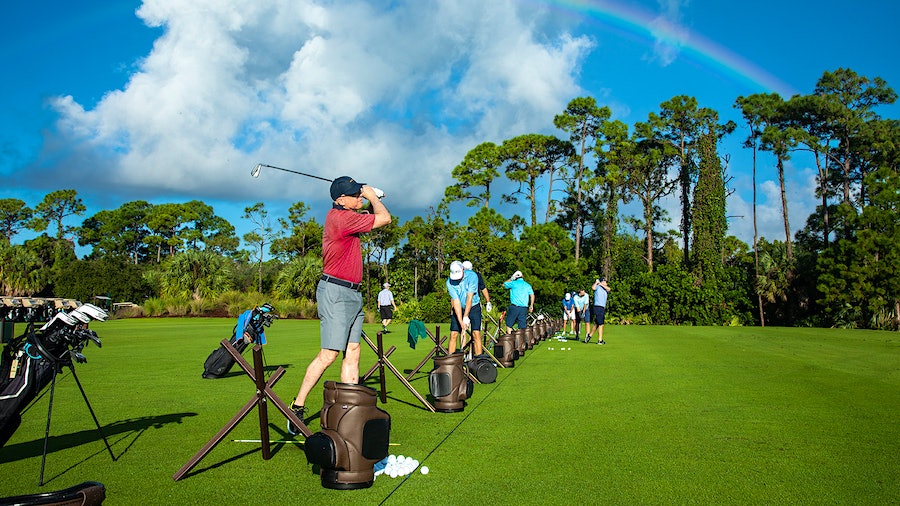 Michael Gelband and other golfers warming up on the driving range at Old Palm.

At the carts, 2011 British Open Champion Darren Clarke had a warm welcome for his fellow countryman Graeme McDowell, winner of the 2010 U.S. Open, laughing and chatting as they stretched out before the round. The aroma of fine cigars was here and there as some opted to light up early, while others tested their skills on the slick practice greens, or chipped balls prepping for the day.

It was November 1, an unusual time for this event, the 14th Els for Autism Pro-Am. Everyone was here to play golf and raise money for a very valid cause. The night before, many of the competitors gathered at the Els Center of Excellence in nearby Jupiter for a dinner on the site of the Pro-Am’s goal: a modern, advanced center of learning for children with autism. 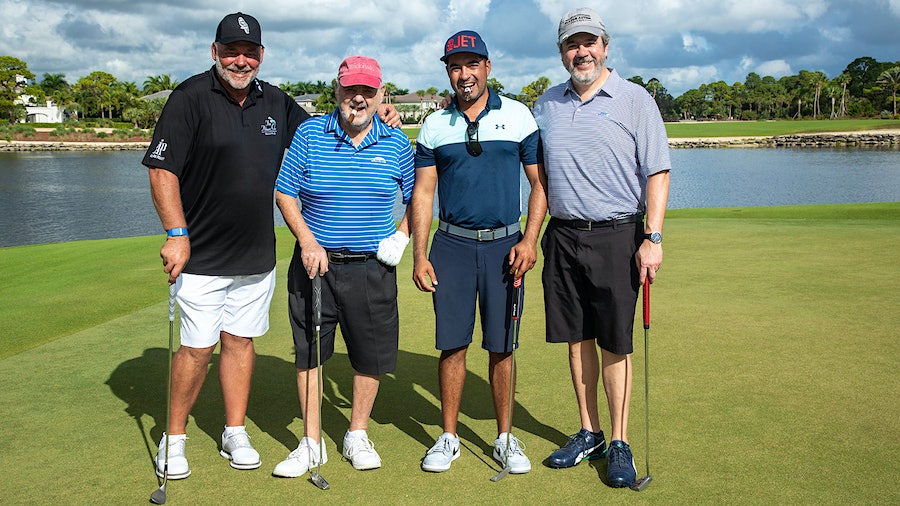 “This is our 14th year,” Marvin R. Shanken, editor and publisher of Cigar Aficionado, said that night. Shanken co-founded the event with pro golfer Ernie Els. He reminded everyone why they were there. “There’s close to 300 kids who go to school here. It’s a great cause.”

After the customary group photo on the putting green, the golfers took to their carts to make their way out on the course on a particularly warm autumn day. Great shots were made, bad shots were laughed about, and the groups made their way around the course having a great time. 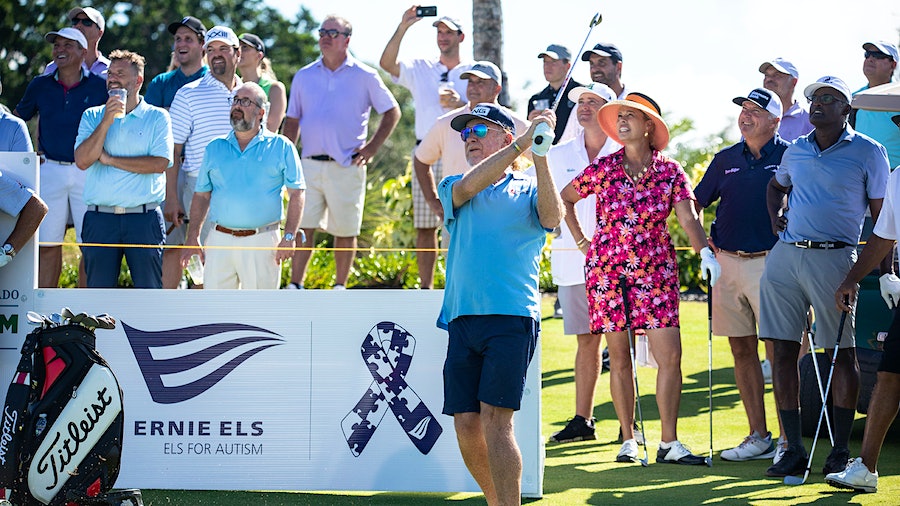 Pro golfer Miguel Ángel Jiménez taking his shot at a million dollar hole in one.

Bacardi and Brown-Forman were the spirits vendors for the Pro-Am, with drinks stations all around the course to make sure plenty of swing oil was there when needed. Alec Bradley had Prensado Churchills, a former Cigar of the Year. Altadis U.S.A. was passing out several award-winning cigars, such as the Montecristo 1935 Anniversary Nicaragua No. 2, Cigar Aficionado’s No. 2 Cigar of 2021. E.P. Carrillo Cigars had their Pledge Prequels, 2020’s Cigar of the Year. La Flor Dominicana had a host of smokes, including Coronados. My Father Cigars had a mix, including My Father Connecticut. Oliva Cigars had Serie Vs, among others. No one would want for cigars on this golf course. 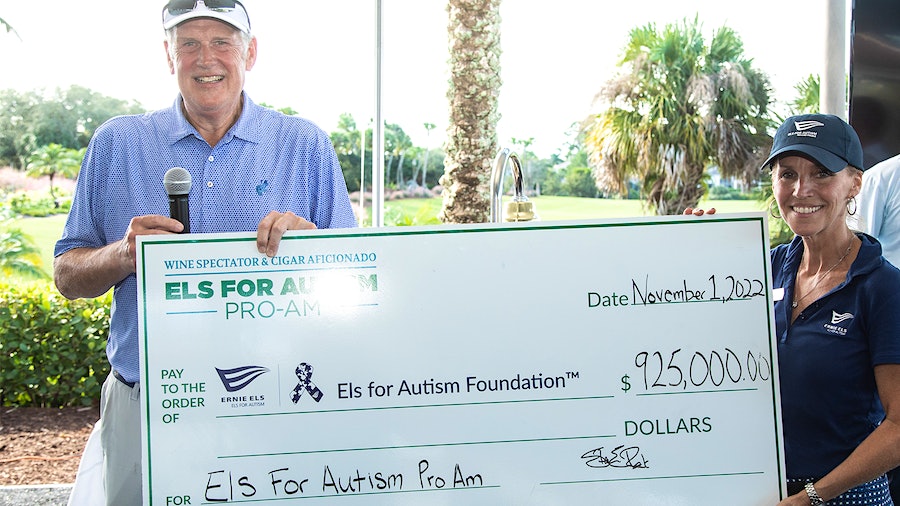 Steve Peck and Dr. Marlene Sotelo holding a check showing the 925,000 dollars raised for the Els for Autism charity with the 2022 Pro-Am.

At the end of the round, the golfers assembled on a hill above the 18th, many of them sipping a refreshing drink or puffing on one of the many cigars they had received. They were all there to watch the field of pros take a shot at Old Palm’s 19th, all hoping for a hole in one that would raise $1 million for the charity. No one sank it this year (Brad Faxton came tantalizingly close) but the crowd cheered each shot.

Over lunch, it was time to wrap up the day. The team from Breakthru Beverage, led by pro Brett Quigley, won in a tiebreaker over the team from Bacardi, with pro Brad Faxon. The Pernod-Ricard team, with pro Miguel Ángel Jiménez, took third. The event raised $925,000 for the charity, bringing the 14-year total to roughly $14 million.

We've had an amazing arrary of covers during our 30-year history. Here are 10 of our favorites.

The famous chef's cigar of choice is a former Cigar Aficionado Cigar of the Year, can you guess which …

Actor Edwin Lee Gibson likes to pair his cigars wtih a single-malt and sometimes a bit of writing. He …

Marvin R. Shanken has interviewed a host of fascinating people from all walks of life throughout the …