Candela cigars are cigar shop oddities. They are green, the color of a frog, a pool table or an empty bottle of Sprite, and they have a long, intriguing history. Some people love them, but others abhor them, making them in some ways the anchovies of the cigar world.

They Once Were The Powerhouses Of The Humidor. Green cigars spent many years as the most popular type of cigars sold in America. They were so popular in the U.S. they became known as American Market Selection smokes. (English Market Selection cigars had natural wrappers, the type we see on the vast majority of cigars today.) Connecticut-shade supplanted candelas starting in the early 1980s, and green cigars began to fade from popularity, especially among handmade cigars.

They’ve Had A Comeback—Sort Of. While they remain somewhat rare, there are more handmade candelas for sale today than there were 10 or 20 years ago, when nearly all candelas were machine-made. Nowadays such respected premium cigar brands as Illusione, La Flor Dominicana and Arturo Fuente have candela versions.

JFK Smoked Them. It’s hard to tell by photos alone, as most pictures of John F. Kennedy smoking are black and white, but there’s no doubt the 35th president puffed on green cigars. We know this because previous auction lots of Kennedy’s belongings have included cigars that were clearly candelas, particularly some double claro Suerdiecks and a couple of green Partagás cigarillos from Havana. 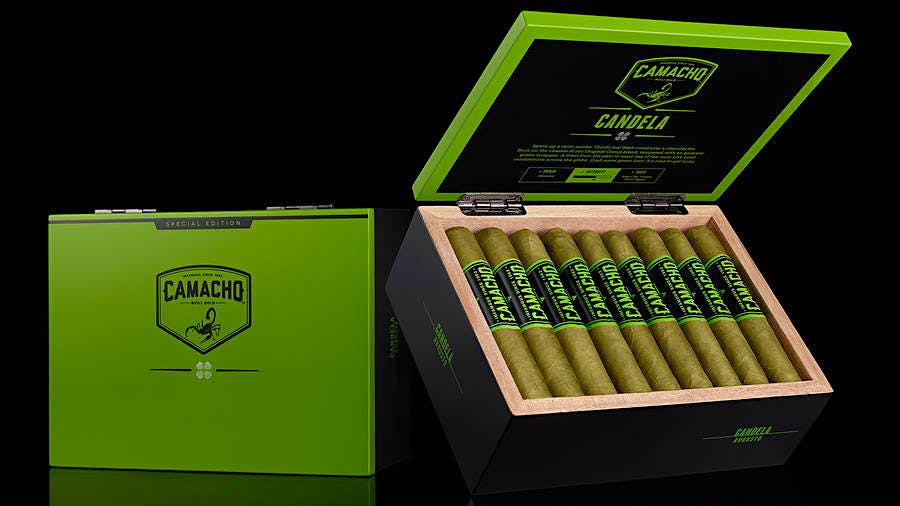 Camacho released its shamrock-hued candelas in 2007 and it wasn’t until St. Patrick’s Day of 2018 that the cigars made a reappearance.

Candela Can Be Grown Virtually Anywhere. Candela tobacco is the result of a process, not a tobacco varietal, so it can be made from a variety of leaves and many countries. Candela is, or has been, grown in Connecticut, Cuba, Ecuador, Florida, the Dominican Republic and Nicaragua. Shade grown tobacco is preferred, or tobacco grown in a cloudy area (like Ecuador) that filters the sunlight.

It’s Not Easy Staying Green. Every tobacco leaf starts off green in the fields. That common brown color you’re used to seeing on the typical cigar comes after harvesting and curing—green tobacco is hung in a curing barn and allowed to slowly dry over a period of 30 to 45 days (give or take), and goes from green to brown. When a farmer is making candela, he has to accelerate the curing process to lock in that green color. The barn is sealed, and the heat is cranked up far hotter than in a normal barn, with temperatures going from 90 degrees to 100 and then as high as 165. This locks in the chloraphyll, which makes the leaves stay green—it also renders them as crispy as a potato chip. Careful rehydration makes the leaf supple once again, and ready for packing into bales. Instead of a month or more, candela is ready in about three days.

It’s Born In Heat, But Needs The Cool. It takes Death-Valley temperatures to create candela, but once it’s made it needs the cold. It needs to stay cool, so it must be kept in refrigerated rooms.

Farmers Love Them. Curing candela wrapper is a far quicker process than traditional tobacco. Due to the fast heat-curing process, it goes from barn to customer quickly, which means faster payment.

A Candela By Any Other Name…Several terms are used to designate green cigars. Candela is the most popular, but they are also known as double claro cigars, and in the old days they were called American Market Selection.

They Tend To Be Mild. Most candelas are milder cigars. They tend to have herbal, grassy, creamy and even minty tasting notes. Candela ratings in Cigar Aficionado taste test typically top out in the high 80s. Click here
to view some of our candela ratings.

A Candela Made A Cigar Legend Sick. Today, Ernesto Perez-Carrillo is one of the most revered people in the cigar world. When he was a young man of 18, he lit his first candela cigar while embarking on a long drive. “I got into my Mustang and lit a candela panatela…I really wanted to get the aroma of the tobacco,” he says. He smoked the cigar, and about an hour later he got sick. “It’s not a regular smoke of mine,” he says with a laugh.